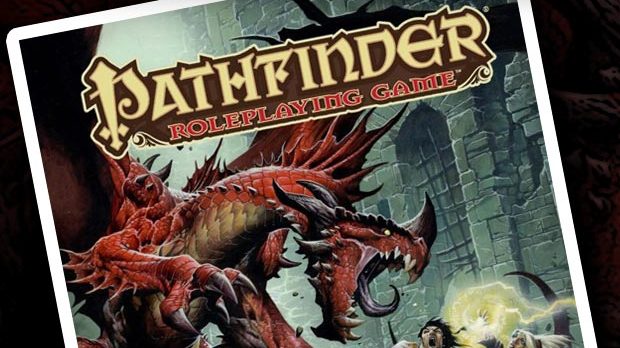 When Wizards of the Coast took a big chance with Dungeons and Dragons 4th Edition, fans of the series were divisively  intrigued and reviled. Some felt it was a sleek new entry into the series while many were put off by the combat-focused play and MMO inspired design. During that maelstrom, Pathfinder exploded onto the scene, refining the mechanics from D&D 3.5 but adding its own flavor to the realm of fantasy roleplay. With the release of the Pocket Edition of its core rulebook, Pathfinder is now available at a reduced price point for new fans and old alike.

Except for size and material, the Pocket Edition is identical to the most recent release of the core book, including some errata and grammar fixes. The entire 576 pages are bound together in a 6.5” x 8.4″ paperback that comes at half the price of the full hardcover. The size change, down from “8.6 x 11″, makes the book much easier to transport and significantly reduces the weight (despite only fitting in truly generous pockets). The text size has been reduced heavily as well, leading to miniscule fonts that are surprisingly readable. Even in dense sections of small text, such as ability descriptions, I never had issues with legibility. I asked a nearsighted friend to glance at some random pages and he also had no problems reading the reduced font.

This is a quick sample of text. As you can see it is packed in there and far from large, but still very legible

While the reduced price and ease of transport are nice, they do come with some downsides. While the glossy cover and individual pages pages feel like they will hold up longer than your average paperback, the Pocket Edition suffers from some of the same plagues: regularly reading through shows on the spine, and the cover wears out faster than its larger counterpart. That said, this book is clearly meant as a workhorse and not a showpiece. You will use it routinely as a reference guide, and carry it with you to far-off games, which makes this a wise practical purchase. The main point of a core book is use at the table finding rules and generating characters. The full size core is always available, but as a work horse to be carried around and opened up, the Pocket Edition serves well without sacrificing content.

The content in question is the same fantasy action that Paizo Publishing has been providing us with since 2009. You play as Pathfinders, explorers who search the far reaches of the world Golarion for treasure, intrigue, and mystery. On the way, you will battle through waves of beasts and wicked sorceries to claim victory over the harsh landscape. Of course, Pathfinder supports many other campaign types, one of their larger adventure paths focusing on the power struggles creating and stabilizing a kingdom.

Busy but entirely consistent. It is also encouraging that Pathfinder characters range across genders and races (and not just the fantasy kinds)

The art style greatly aids this high fantasy adventure aesthetic. The comic-inspired approach along with iconic character designs throw your mind into the action as soon as you see them. Each is spilling over with detail, whether it be the small vials adorning the belt of an alchemist or scarred claws of an ancient dragon. You are instantly overwhelmed with the energy of the scene but slowing down gives you keen insight into the history of whoever is being portrayed.

Character generation follows standard tropes only to the degree necessary to make you comfortable picking up the book. Races have the typical mainstays from elf to dwarf, half-orc, et cetera. Classes are similarly split between common archetypes of fighter, wizard, rogue, and the like. The differences come in the depth of customization you can achieve between characters, even with the same race/class combo. Ability scores, skill points, equipment and spell lists are all subject to intricate care. While these all sound like standard character traits, Pathfinder takes them to a completely new level. Races and classes have multiple small features that interact with each other in ways that are only apparent after careful study. The depth and variety of characters that you can generate even without venturing into the other releases is staggering. It is also, at times, problematic.

The main flaw of Pathfinder is the same thing that draws people into the game: its complexity. Some character build options are simply less viable than others, and you can only find this out after several sessions getting attached to a character. New players will be completely baffled by the bevy of tools at their disposal. The character sheet alone is a mess of numbers floating around and influencing one another between multiple different types of defenses, bonuses, maneuvers, and equipment tags. Even for an experienced player, it is easy to get lost. With so many things to weigh, how can I determine if I should increase my combat maneuver bonus as opposed to being better able to defend against mental influence? The feat list, a collection of special abilities that can be improved over time, is a perfect example. It is overflowing with options. Some of them are good, some less so, and some can only really be utilized when considering how they interact at higher levels with other upgraded feats. Not to mention the prestige classes which are also in the book and add to the number of options you have, albeit at a later stage of play.

The wealth of abilities makes for strategic builds and play. You are constantly trying to balance yourself against the odds and make a character that is both narratively interesting and effective. Once you get past all of the strange abilities, combat is a tense series of exchanges that test your mastery of the game at every step. This focus on combat can work to the exclusion of other parts of the game, however. Characters have untold numbers of abilities to handle their prowess on the field of battle, but less focus is given to social encounters or exploration. While by no means ignored by the designers, these other portions of the game are given less care and will have significantly less impact as you consider how to create a character.

Pathfinder is subject to another weakness that new players won’t be able to articulate at first but will slowly come to realize as games progress: the probability swings. Pathfinder’s main mechanic is the twenty sided die, referred to as the “d20” in most familiar circles. Success on a skill or attack check requires rolling this die, adding your appropriate modifier, and checking against a difficulty level. These modifiers, which come from ability scores, skill points, feats, class abilities, terrain modifiers, possible active spells, and other sources, all have to be kept track of by the GM. Things quickly get out of hand as these modifiers stack ad nauseum, which they will the longer you play. If I have a +7 (which you easily could at first level) my results could vary wildly between 8 and 27, and the GM has to account for that when setting difficulties. Moreover, those  modifiers only increase as time goes on, making the d20 less and less significant as time goes on. It is difficult to design an encounter when you can only vaguely guess at the capabilities of a character beforehand.

Luckily, those hoping to run a game in Pathfinder will find no shortage of support. The Core Book is no mere player’s guide; it also functions as a manual for the game master, including enough material within it that you would not need a separate book to run a successful game. Those interested will find themselves welcomed by the vast library of premade adventures, genre books, and more available from Paizo. Within the book itself you can find rules for NPC generation, equipment, magic items, traps, dungeons, different environments, and more to get you started. In a way this could be a detriment, as the wealth of information could easily overwhelm new GMs. That aside the resources and inspiration in the book are enough to carry you through for years of play.

The only aspect lacking in the Core Book is a dedicated section on monsters, which are the meat of the game because of its focus on combat. Packing these all into a single book would have made for an unwieldy behemoth, and excising them was probably for the best. Nonetheless, this is the single aspect of the book that requires seeking outside resources, whether it be the free resources online or one of the existing bestiaries. Very much aware of this, Paizo has released a pocket edition of the first Bestiary as well, which also comes at half the price of its original version.

All told, this book contains everything you need to create some characters and start exploring the perilous wilds of Golarion. You may need some extra resources along the way, especially given the complexity of the game, but by no means is this book lacking in the tools necessary to get you going on a high fantasy adventure.

The Pathfinder Core rulebook’s pocket edition gives you everything you wanted from the original release in a more manageable and inexpensive package. The strategic play and character customization are sure to turn many off, but that doesn’t stop this from being one of the greatest ways to get into fantasy roleplaying.