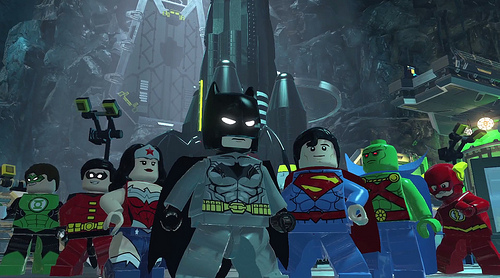 Anyone who has played the LEGO video games over the years has probably noticed that each game has endeavored to be even bigger than the last. Whether they were pushing the limits with 150+ playable characters, the addition of voice-acting, or most recently, including open-world elements in their games, it’s fair to say that Traveller’s Tales is an ambitious bunch. LEGO Batman 3: Beyond Gotham is perhaps their most ambitious yet, as The World’s Greatest Detective takes to the stars to battle the cosmic evils such as the Brainiac and other foes from the Green Lantern Universe. While not all of the title’s newest additions worked, LEGO Batman 3: Beyond Gotham keeps all of the series’ charm and tries some new things that help freshen up a familiar experience.

LEGO Batman 3: Beyond Gotham picks up right where LEGO Batman 2 leaves off, with Lex Luthor defeated (though still seeking the Presidency through nefarious means), but Brainiac appears and quickly becomes a bigger threat with his plans to shrink Earth into a size more suitable for his trophy case. Batman must team up with the rest of the Justice League and travel to the homeworlds of the Lantern Corps and ultimately bring down Brainiac. As usual, the story has a lot of the silly slapstick humor that is one of the best things about LEGO games. Humor aside though, the story serves mostly as a backdrop for an ambitious adventure and isn’t particularly interesting, but it’s par for the course with most LEGO original stories.

DC fans will rejoice at the vast collection of playable characters drawn from the DC Universe, which includes everyone from Harley Quinn to Condiment King. Per usual, characters have a diverse combination of different abilities that help make each one a unique experience. The only downside here is that there are also some annoying appearances from non-DC Universe characters that will undoubtedly annoy the crap out of nerds like myself. The Green Loontern (a Daffy Duck version of the Green Lantern) is bad enough, but appearances from Conan O’Brien and Kevin Smith are even worse. Conan O’Brien in particular is incredibly bothersome, as he stands in one place throughout the entirety of the game and shouts the same joke over and over again.

Probably the best part of the game is the Adam West 1960s Batman cameo. One level is included in the game that channels the old school Batman vibe, complete with the “BIFF” and “POW” onomatopoeia, and is narrated by Adam West. Any fans of the classic series should play this game for this cameo alone–seriously, it’s THAT good.

LEGO Batman 3: Beyond Gotham does suffer from technical issues, and worse so than any of the previous LEGO games I’ve played. Framerate dips are epidemic, and the camera angle issues are back and worse than ever. Characters and items are consistently hidden from view, and misleading angles will make players miss easy jumps and fall to their doom. The splitscreen co-op is also still a tad annoying with the halves of the screen that each player is on sliding around the screen in an annoying manner.

The amount of content in LEGO Batman 3: Beyond Gotham is impressive, and will give fans plenty to enjoy, although those hoping for something new will have to wait for now. Traveller’s Tales are sticking with the tried and true formula that they’ve developed over the past decade or so, and that’s fine because the formula works, but it’s less fine if you’re getting bored of that formula.

LEGO Batman 3: Beyond Gotham is a worth addition to the LEGO Batman series, but while all that is good about these games has returned, all of the glaring issues with the series are worse than ever.

You know that jerk online that relentlessly trash talks you after every kill? That guy was probably Travis "Tie Guy" Northup. Competitive, snarky, and constantly wearing a tie, Travis has been writing his opinions about electronic media since he was a teenager, and is pretty much the only person to hold his opinions in high regard.
Related Articles: Lego Batman 3: Beyond Gotham
Share
Tweet
Share
Submit