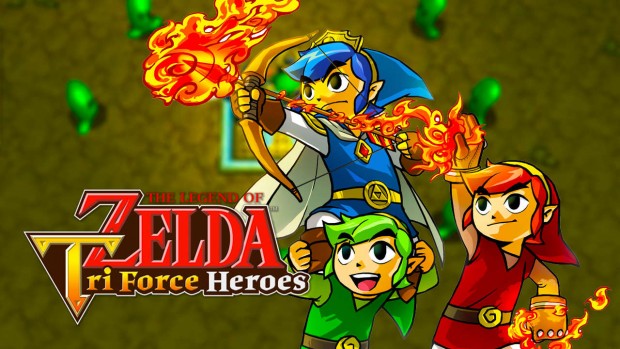 The Legend of Zelda series is no stranger to spin-off titles, with each non-core entry having its own varying degrees of success. While the series is normally known for its lengthy, story-based adventures, Link has seen his fair share of side questing, whether it’s fighting hordes of enemies in Hyrule Warriors or even practicing his accuracy in Link’s Crossbow Training. However, of all of Link’s nontraditional endeavors, one sub-series arguably stands as the best: The Legend of Zelda: Four Swords. Retaining the fantastic puzzle-solving mechanics and action that the series is known for, but ramping it up to accommodate multiple players, the Four Swords series has become popular for its excellent cooperative and competitive multiplayer.

The Legend of Zelda: Tri Force Heroes takes the foundation established by Four Swords and expands upon it in many ways. Although there is one fewer hero than before, the concept is still the same: players join up to make teams of three and solve puzzles that require a considerable amount of cooperation. Each player controls their own Link, but going solo here will get you nowhere; these puzzles are built around needing multiple players to solve and can’t be done otherwise. The result is a unique gameplay experience with plenty of moments that are both challenging and hysterical, while still feeling like a Zelda game. The Legend of Zelda: Tri Force Heroes as a whole is a blast to play, and one of the best handheld co-op experiences out there, albeit with a few understandable frustrations when playing solo.

One of Tri Force Heroes’ biggest improvements over Four Swords is in the construction of the puzzle design. Unlike Four Swords, which has previously seen multiplayer playable between two and four players, Tri Force Heroes is locked at three at all times. While this can potentially feel like a nuisance when wanting to play with only one partner, the puzzles tend to be more creatively built because of it, and feel much more natural due to a constant player count.

Most puzzles can’t be solved with just one hero.

The challenges seen in Four Swords were usually scalable (depending on the player count, the number of switches that needed to be activated would change from two to four, for example) so while teamwork was still necessary, it occasionally felt like players were acting on their own, working together but not as one. Without the need to scale for varying players, Tri Force Heroes is successfully able to create puzzles that are solvable with a constant player count. For example, many of Tri Force Heroes’ cleverly designed puzzles are built around height, with the key to solving them lying with the game’s ability to stand on the shoulders of other Links, creating a human totem pole. The format in which Tri Force Heroes presents its puzzles feels more thought out as a result, and makes for a well-executed co-op experience as a result. Tri Force Heroes boasts some excellent puzzles that arise from the locked player count; it still feels very much like Four Swords, but evolved for the better.

That need for three players can be seen as a double-edged sword, however. Tri Force Heroes is ideally played with three human players, but is also playable with just one. In the case of a single-player session, one player is able to control all three Links separately. This is done through the use of “Doppels”, wooden statues that stand still when not active, but spring to life when the player switches to that character. Essentially, one player must individually control all three heroes, cycling between them and moving them separately, one-by-one. This unfortunately creates a much more sluggish experience since the player cannot advance all three heroes at once, and becomes especially cumbersome when needing to solve puzzles that require precise timing. Ultimately, playing by yourself forces you to think not how three people can solve a puzzle, but how one person can do the work of three in just as much time. It’s respectable that Tri Force Heroes is playable for a single player, but this approach pales in comparison to co-op.

Thankfully, Tri Force Heroes makes teaming up with other players an absolute breeze. Chief among Tri Force Heroes’ multiplayer connections is its simple Download Play option, letting three players play together locally, even with a single copy of the game. The download process is incredibly simple, and every level in the game is available to enjoy, even to players without the game. Further options become available to players who own the game, such as the ability to customize clothing, but Download Play is a welcome addition that can still provide loads of mileage.

Online co-op is also available, giving players the ability to link up with friends or other random players. Finding partners to play with is relatively seamless, and although I did encounter a few moments of lag and dropped connectivity, the experience holds up, creating an easy way to play the game in its optimal co-op setting even if you’re by yourself. Regrettably, Tri Force Heroes does not support voice chat, but a variety of touch screen-based emotes are thankfully available to help players guide one another. These emotes are extremely convenient, and while they are prone to some hilarious spamming in moments of celebration, I never once had a problem conveying tips to other players due to how simple and helpful they are. Local play is still the preferred multiplayer option, but online play is definitely a worthwhile alternative.

The story of Tri Force Heroes feels like an odd fit. In the fashion-obsessed kingdom of Hytopia, Princess Styla has a curse placed upon her by an evil witch, with the call for the legendary Tri Force Heroes sent out to restore beauty to the land. The entire game retains this fashion theme — “King Tuft”, “Sir Combsly”, and “The Drablands” are just a few of the over-the-top names you’ll hear in Tri Force Heroes. As one of Nintendo’s more serious franchises, an entire game built around the idea of fashion never manages to feel like a natural fit for the Zelda franchise. The game’s focus on fashion factors into the gameplay as well, as players can purchase outfits that each have unique bonuses, but Tri Force Heroes never managed to sell me on its silly theme.

Thankfully, the fashion theme can be forgiven due to Tri Force Heroes’ excellent presentation. Using the same charming and colorful art style as The Legend of Zelda: Link Between Worlds, Tri Force Heroes is stunning to look at. The same tight controls have been brought back as well, helping to compliment the game’s fantastic puzzle design to create a smooth experience. Tri Force Heroes is just as enjoyable to look at as it is to play.

The Legend of Zelda: Tri Force Heroes can occasionally get tedious when playing alone, but the multiplayer is one of the greatest handheld co-op experiences around.

Gaming Trend's resident amiibo collector, Matt's a lifelong gamer with a soft spot for Nintendo. As a new father, Matt often struggles to stay as involved as he has been in years past but can always be counted on to come back for some engaging geeky conversations. A resident of Philadelphia, he is currently working on building up his Man Cave with all things Marvel, Star Wars, and Video Games. As an old-school gamer, Matt firmly stands by his belief that gameplay will always be more appealing than story.
Related Articles: The Legend of Zelda: Tri Force Heroes
Share
Tweet
Share
Submit