The Hyperdimension Neptunia series started back in 2010 and has continued to march on with sequels and spin-offs galore. The core cast has remained the same, although other aspects of the games have changed as time has passed. In the newest addition to the franchise, Neptune and friends take to the 2D world in an effort to defeat evil. It’s quite a departure from the standard formula of the previous games, but it still provides an interesting story, a goofy cast, and a hit or miss combat system.

The story begins in a way that will be familiar to fans of the series: Neptune wakes up with amnesia and only remembers her name. Sure, it’s been done before, and they quite comically point that out in the game itself, but I was still looking forward to seeing how they resolved that problem this time. Neptune is found by a member of a group called Bombyx Mori, a mysterious group with some instantly off-putting vibes. She gets recruited and during her first mission for them, she meets a mysterious woman named Chrome. Chrome seems to know Neptune and this causes Bombyx Mori to attempt to use her as bait to lure Chrome to them. After some fighting, Chrome swoops in and saves Neptune. Once safe, Chrome gives Neptune a magical book named Histoire, which Neptune lovingly names Histy, that glows when in the presence of allies. With this, Neptune is sent off on her own to make money, explore the world around her, and find some strong allies. On her journey, she begins to run into the other goddesses, Noire, Blanc, and Vert. Reuniting these powerful ladies will enable them to one day defeat Bombyx Mori. 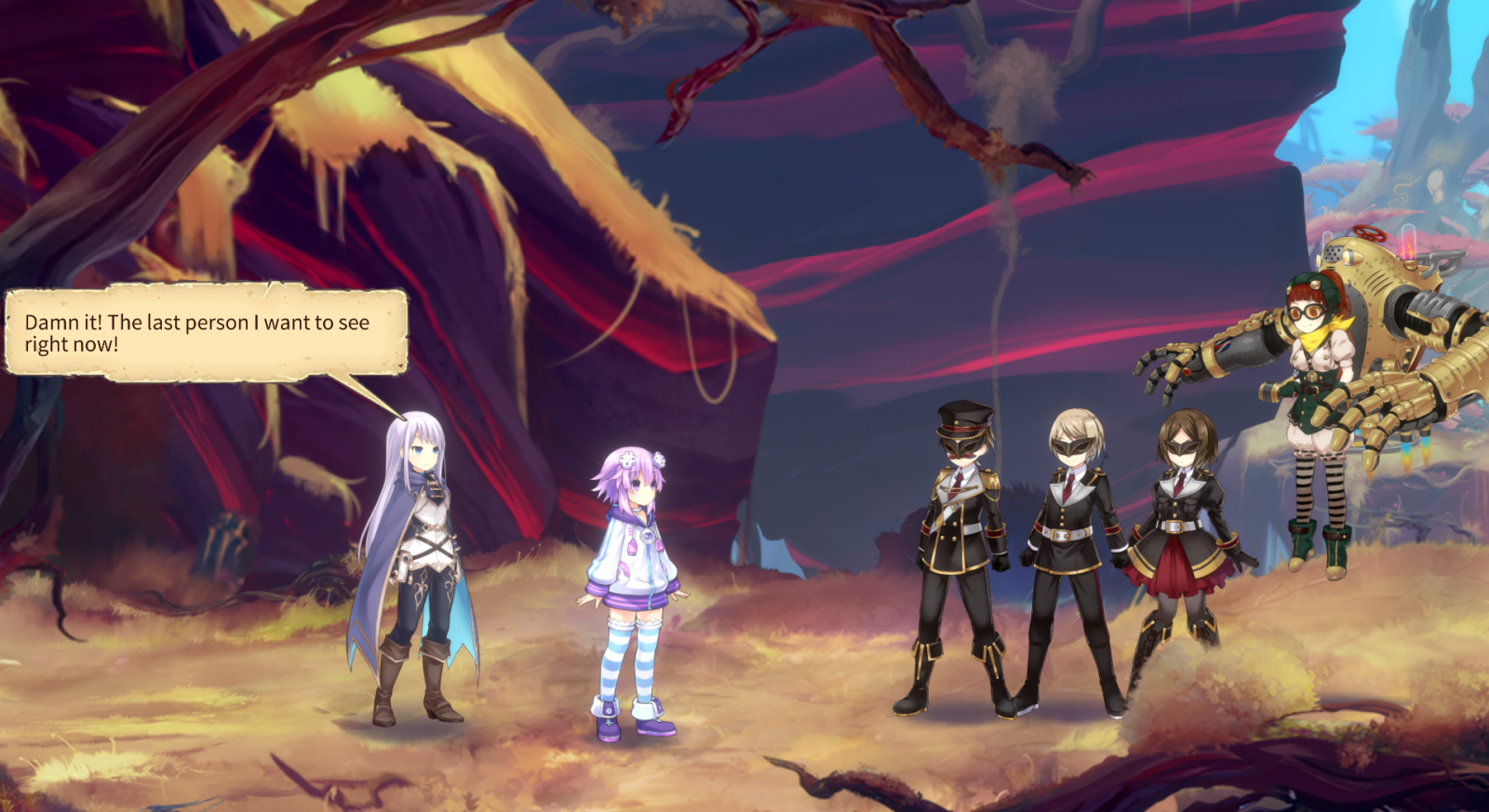 I also love that Super Neptunia RPG continues the 4th wall breaking jokes and references that the series is known for. These, along with the goofy antics of the characters, make everything funny and more enjoyable. For example, at the end of battles Neptune will hum the victory tune from Final Fantasy. She’ll also call out that she’s in a video game with lines like “I’m the protagonist, I can’t die,” and “Amnesia again? Haven’t we done this before?” These cheeky moments always put a smile on my face. I won’t deny that I laughed as soon as I heard her hum the Final Fantasy tune.

The gameplay follows the standard RPG format: walk around to explore the overworld, complete story quests and sidequests, and make contact with enemies in the overworld to start a battle. Starting a battle takes you to a screen with the enemies on the left and your team on the right. Your team stands in a diamond-like formation, with a different button representing each character. Pressing the button next to a character causes them to use the move they have assigned to that spot. Each fighter can only use one move per spot, but you can have different moves assigned to different spots. Also, on PC the game follows the A, B, X, and Y buttons from Xbox, but you can set the controls to keyboard and map them as you see fit. I personally went for I, J, K, and L respectively. They were much easier for me than the default setup. 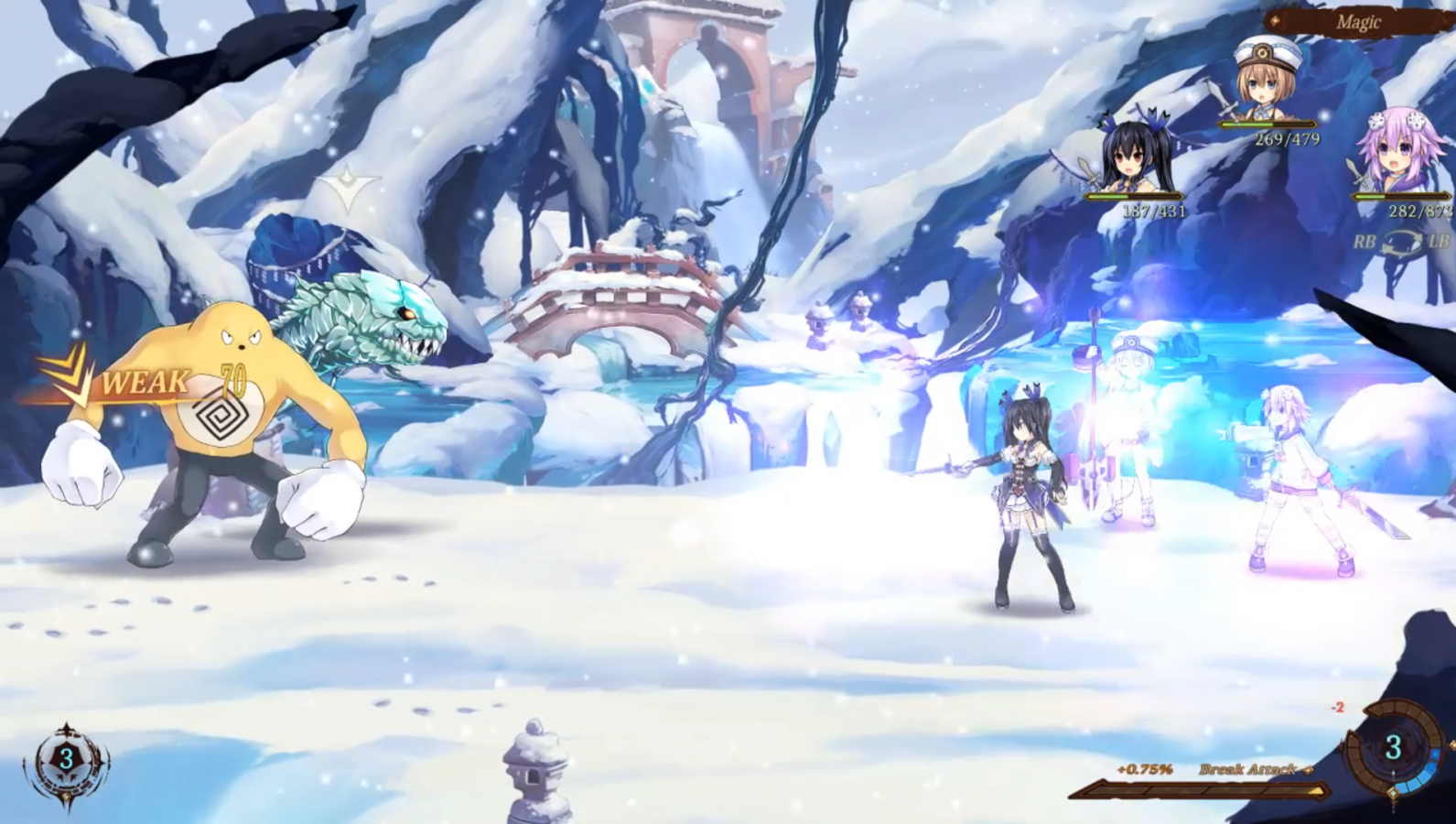 As an example, let’s say Neptune is set to use poison edge in the X position, raise in the A position, a normal strike in the B position, and omni cure in the Y position. This enables you to have four possible moves for her to use, but she must be in the correct spot in order to use certain moves. You can rotate the positions of your team with just a quick button press or two (depending on how you’re trying to move them around). There’s no energy cost or penalty for swapping your positions, so feel free to rotate to your heart’s content. Depending on who you’re fighting and how well your team is faring, you’ll likely want to move your team around in order to more effectively fight and survive.

Unlike swapping, using your moves costs energy. There’s an energy meter in the bottom right that constantly replenishes itself. The meter is broken up into segments, but there’s also a number next to the meter that shows how many segments worth of energy you have. Different moves cost different amounts of energy, but you’ll know what moves you can use based on the corresponding character’s button prompt appearing. For example, if an X appears next to the character in that spot, that means you have enough energy to use their move. Once pressed, that character will use their move as soon as they are able; sometimes they must wait for an enemy’s attack to finish. If you have enough energy, you can even combo one character’s moves together. On the other hand, you can also have multiple characters act at the same time. This allows you to do things such as beat down one enemy with several fighters or even perform some heals while others do some damage. On that note, I highly recommend setting some characters up to be healers; it will save you from using a bunch of healing items. 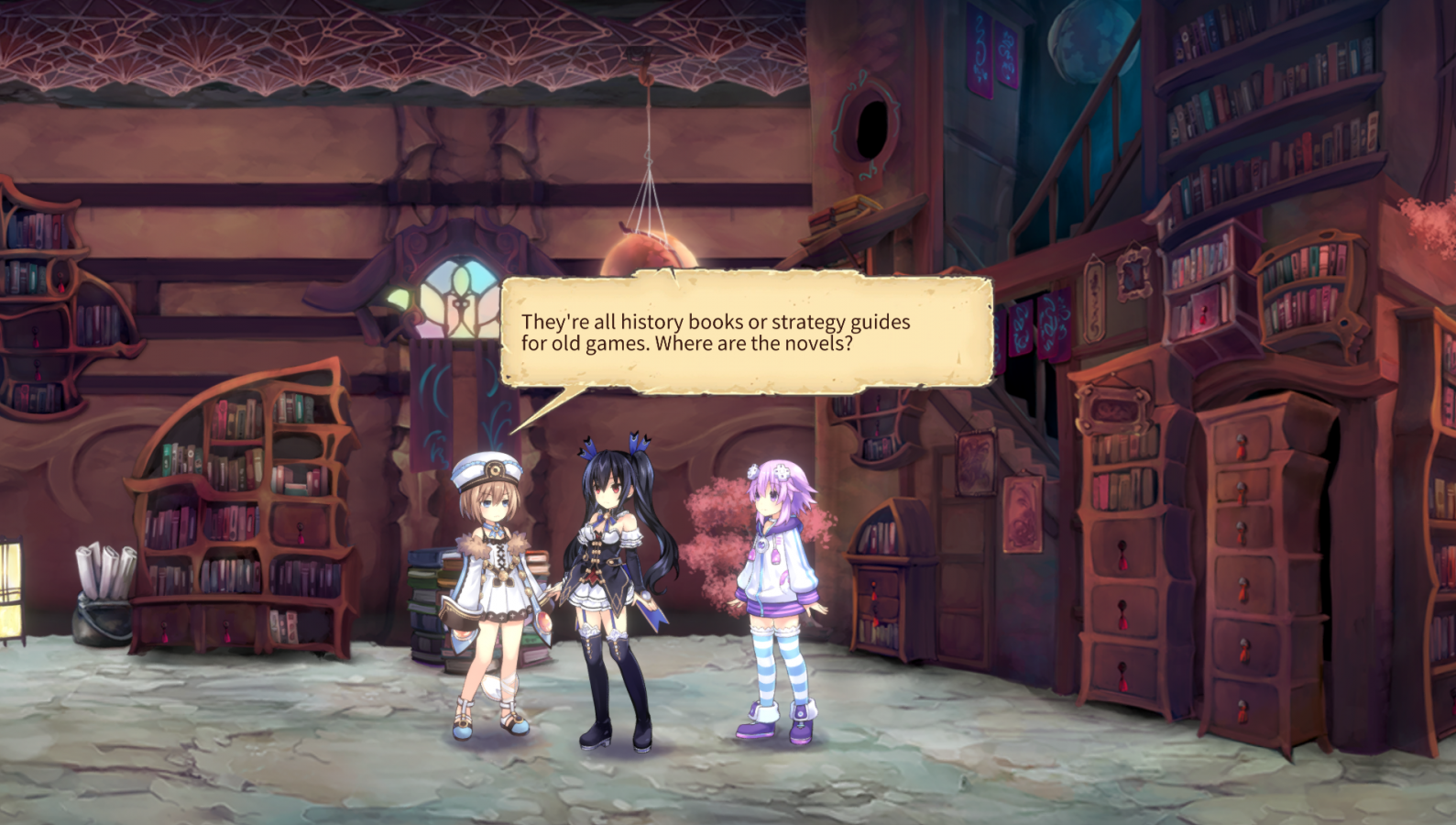 In combat, you’re unable to dodge attacks. The only way to dodge is if your character gets lucky enough for an attack to miss. Being unable to dodge sucks, but it also challenges you to be more careful during encounters. As you fight, you’re also able to swap your target on the fly in case you want to focus on somebody else. I tended to focus on either whoever I know would die in less hits or whoever was doing the most damage to my team. As mentioned before, you can go into the menus during combat and use items to heal your team and even do extra damage to your enemies.

Outside of combat, you’ll be exploring the various pathways, towns, and dungeons as you work on completing quests and searching for monsters. Make sure to talk to NPCs so that you can get sidequests that reward you with experience, money, and various items. Overall, the sidequests are pretty simple and easy to complete, so you won’t want to skimp on them. Along with sidequests, you can also take on hunts posted in the guild bases. These task you with heading to designated areas in order to wipe out a specific creature that’s causing problems. Again, you’ll want to take these on to get extra experience, money, and items. As a bonus, some items can be found scattered throughout the overworld, so make sure you explore every path. 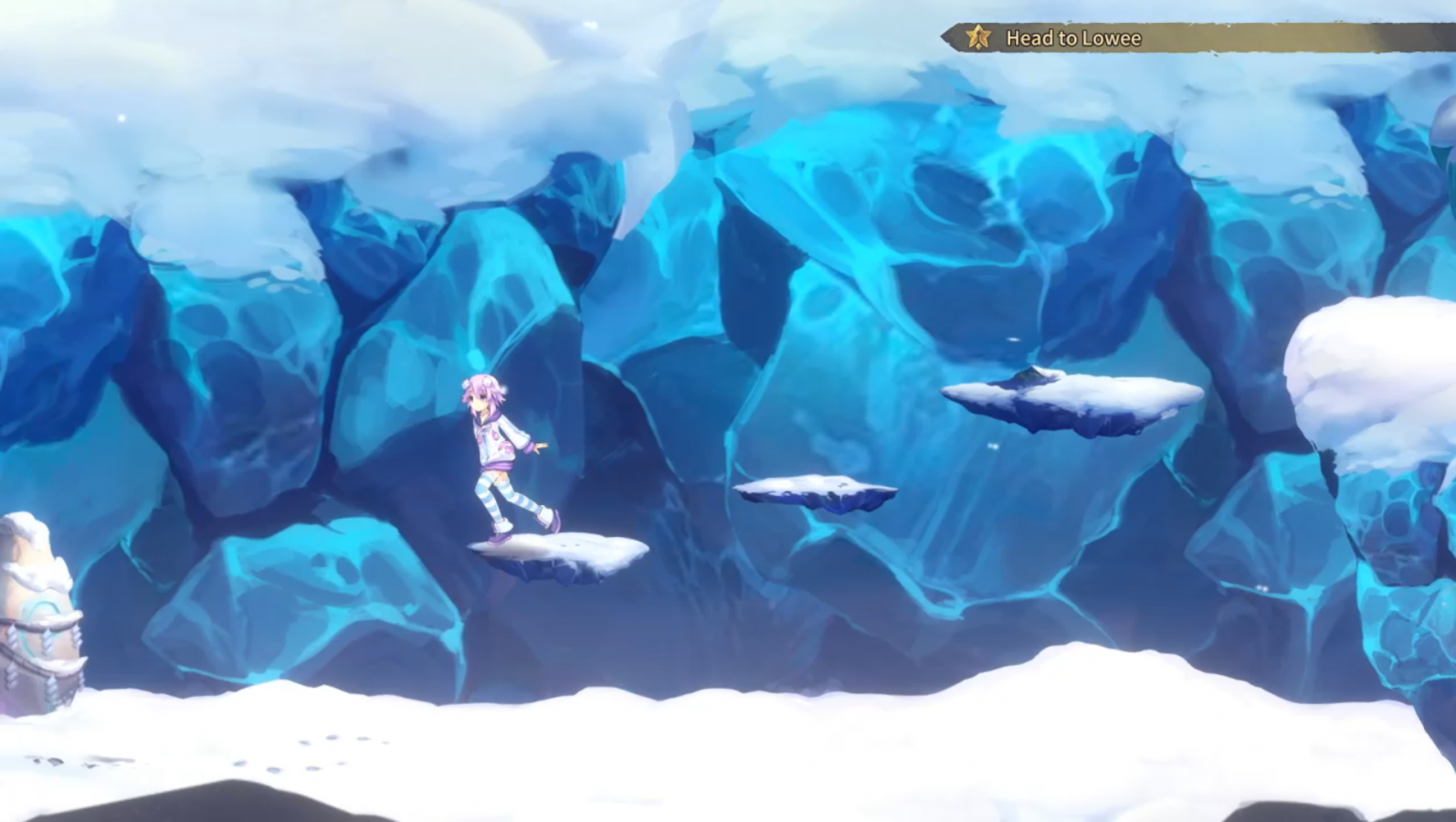 I mentioned before that the characters are goofy, quirky, and funny, and how much better that made the game for me. Being familiar with the cast makes the game much better as well, even though it’s been a few years since I’ve last stepped into their shoes. Even in the 2D world, everything about the game feels reminiscent to the originals. You still get that adorable and whimsical charm from both characters and environment that the original made so popular. Along that same vein, the soundtrack offers a good mix of upbeat tunes, tense music, and somber instrumentals.

The game lands in a good spot in terms of difficulty. So far, I haven’t encountered any scenarios that have felt unfair. I can tell that like typical RPGS that I’ll need to make sure I continue to fight plenty of battles and complete as many sidequests as possible in order to stay strong enough to survive. That’s the best way to avoid any annoying grinding, so hopefully I won’t fall behind at all. That being said, even with the altered combat and switch to 2D, I’d say Super Neptunia RPG is a great addition to the franchise. If you’re a fan of the series or just have an interest in this fascinating cast of characters, then I’d recommend picking it up and embarking on your hero’s journey.

Super Neptunia RPG is a fascinating spin-off for the Neptunia franchise. With a switch to 2D and a reworked combat system, you get a nice change of pace for the series. At the same time, the combat system is simplistic and might turn off some players.

Codi loves to play video games and watch movies. He will watch almost any kind of movie just to experience them. His ideas take inspiration from the shows and movies he watches, and games he plays. He also loves a good pun.
Related Articles: Super Neptunia RPG
Share
Tweet
Share
Submit