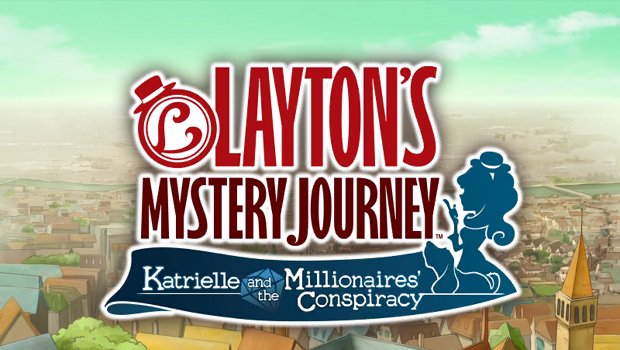 It’s legitimately odd to fathom the fact that 2007 was a decade ago; the only thing I vaguely remember from my freshman year of high school was yelling, “WHAT TIME IS IT? SUMMER TIME,” after the first day. However, that year also marks the 10th Japanese anniversary of the Professor Layton series, and through six main games and countless spinoffs, we’ve grown to love the puzzle-solving professor and the merry cast of people that apparently can’t breathe without asking Layton for help. However, with Professor Layton’s grand finale in 2014, what else could the franchise do to commemorate a decade of riddles? Enter Layton Mystery Journey: Katrielle and the Millionaires’ Conspiracy, a mobile main entry that contains a new protagonist, new settings, and the tried-and-true collection of puzzles we’ve known for years.

Layton’s Mystery Journey stars Katrielle Layton, the daughter of the renowned Hershel Layton. After he disappears without a trace, she decides to open Layton Detective Agency, which declares, “Any mystery solved!” Early into the game, she meets an amnesiac dog that can talk to her and also her assistant, Ernest Greeves. Dubbing him Sherl O.C. Khlomes (very subtle, Level 5), the trio participate in twelve different cases around London as they solve the mysterious happenings around them. Embroiled in their sleuthing is a ring of seven millionaires, known as the Dragons, which Katrielle assists.

It wouldn’t be a Professor Layton game without a sliding puzzle, now would it?

Gameplay is mostly reminiscent of the DS and 3DS titles (which makes sense, since this game was simultaneously released on mobile and 3DS in Japan). After some cutscenes and dialogue, you explore different backdrops with a magnifying glass, which lights up when you find clues and people with whom to converse. Along the way, you’ll encounter a host of puzzles, some of which are required to solve in order to progress. While ongoing mysteries are nothing new in Layton games, Mystery Journey takes this aspect and revamps it for this game. Each case is a standalone affair, and as you investigate each location you’ll end up getting pieces to a puzzle which will explain more of the situation at hand.

These are my favorite types of puzzles, to be honest.

Movement flow transitions well in this mobile iteration, as it’s a more easygoing and relaxing affair compared to the last mobile title, Layton Brothers. The presentation is top notch, retaining the graphical style of the 3DS titles while still being different. The 3D character models shine on mobile, and the anime cutscenes are beautifully made. The sound quality is a mixed bag, however, as the fidelity seems a bit decreased when listening to in-game voice acting, but the music is the same comforting score we’ve known and loved.

The gameplay transition to mobile is near perfect, but the story could use a lot of work. Previous Layton games had an overarching narrative, with engaging protagonists and a slew of mysteries that, while predictable near the end, kept me engrossed. On the other hand, Mystery Journey seems to fall a bit flat on that end. While the Katrielle/Ernest/Sherl trio is meant to replicate the Hershel/Luke/Flora and Emmy dynamic from the previous two trilogies, it doesn’t work due to how jarring the change in protagonists is. I don’t mind Katrielle’s wide-eyed idealistic nature in solving puzzles, but when compared to her calm and composed father who had hidden depths even in his most recent games, she seems a bit shallow. It also doesn’t help that Ernest is an unapologetically clingy yes man that is infatuated with everything Katrielle does and ends up being a flat character who pales in comparison to Luke’s character development. This obsession is slightly justified near the end of the game, but the reasoning is still shoddy.  I appreciated the two supporting members to the cast, the hot-blooded Inspector Hastings and the cold-hearted profiler Emiliana Perfetti, and Sherl does a great job acting as the only sane man, erm, dog within the trio, so at least they make up for the disappointing main characters.

Even as she’s accused of murder, Katrielle always seems to be bubbly enough to solve the case!

The cases themselves are, for the most part, uninteresting. I spent more time enjoying the puzzles than navigating the story; while the mystery aspect of the game is different from the other main entries, that doesn’t always mean it’s engaging. Each case takes roughly an hour to complete, but there really isn’t any payoff to them. This is a shame, as the two mysteries that could be ripe fodder to flesh out (egregiously who Sherl really is and y’know, why Hershel had the gall to leave his daughter when she was young in the first place) don’t get mentioned beyond a couple passing references in the end credits. The eponymous Millionaires’ Conspiracy doesn’t even get screentime until the last case, which is a shame, as it was the most engrossing of the twelve. I feel like this game could have taken the Layton Brothers approach, which felt like each case was an episode in a crime serial, with a personal arc for the main characters interspersed between cases.

Don’t let the story dissuade you from playing, however, because the game is jam packed with puzzles that’ll last you for a while. Not wanting to be outdone by Azran Legacy, Mystery Journey includes hundreds of puzzles to complete, with more being added daily via download. Within the main game are puzzles galore, even if there’s flimsy reasoning for these brain teasers being there in the first place. (Katrielle literally stopped to solve a puzzle while she was on the run due to being a suspect of murder. RIGHT NEXT TO THE POLICE.) These puzzles will test your wits in very lateral ways, and a lot of them will have you go, “Ah, I didn’t think of it like that!”

Seriously, GET OUT OF THERE.

The gameplay remains unchanged here: by solving puzzles, you earn picarats which will unlock different end-game bonuses. Getting an answer wrong will decrease the number of picarats you can earn, but due to the mass quantity of puzzles provided, you don’t have to worry about missing any content since you’ll always have enough to unlock everything. (Think of it like a high score.) Hint coins (which you can find while searching backdrops), will be your currency to unlock up to three hints per puzzle for a coin apiece, with a super hint all but giving you the answer for two more coins. This ensures you won’t be stuck on a tricky puzzle should you need to proceed.

The puzzles themselves are pretty fun, and for the mobile platform, are designed for communicating with others. Since everyone reacts differently, you might have trouble on some types of puzzles, while your friend can breeze through them with ease. It’s always pretty cool to work together, even if it’s only a single-player game. There were a few answers that violate common and logical sense, but that’s the charm of the series.

You’re going to have to think outside the box for some of these puzzles.

Post-game content and replay value are top notch too. While it does take around 12 hours to beat the main story, you can go back and revisit cases in order to find puzzles or hint coins you may have missed. There are also some puzzles which can only be accessed after finishing a case, so there’s an incentive to go back once again. This also means that you don’t have to worry about losing hint coins forever, and a staple of previous games, Granny Riddleton’s puzzle house, is no longer necessary to get back to puzzles you missed.

Additionally, there are three minigames you unlock for levels through advancing in the main story that, in turn, unlock the hardest puzzles in the game. From taking food orders to helping Sherl get out of a block-puzzle pound, they’re interesting diversions that can keep your mind off of the main story. All in all, the excellent gameplay elements of the Layton series are still here, and still as classic as ever.

You gotta do the cooking by the book!

Layton’s Mystery Journey: Katrielle and Millionaires’ Conspiracy is a great mobile foray into the mainline Layton series. While the overall story is a tad uninteresting, the excellent puzzle gameplay and tons of replay value more than make up for it. This is a title worthy of its franchise’s reputation.

Elisha Deogracias is an aspiring accountant by day, freelance writer by night. Before writing for Gaming Trend, he had a small gig on the now defunct Examiner. When not being a third wheel with his best friends on dates or yearning for some closure on Pushing Daisies, he's busy catching up on shonen manga and wacky rhythm games. Mains R.O.B. in Smash. Still doesn't know if he's a kid or a squid.
Related Articles: Layton’s Mystery Journey: Katrielle and the Millionaires’ Conspiracy
Share
Tweet
Share
Submit