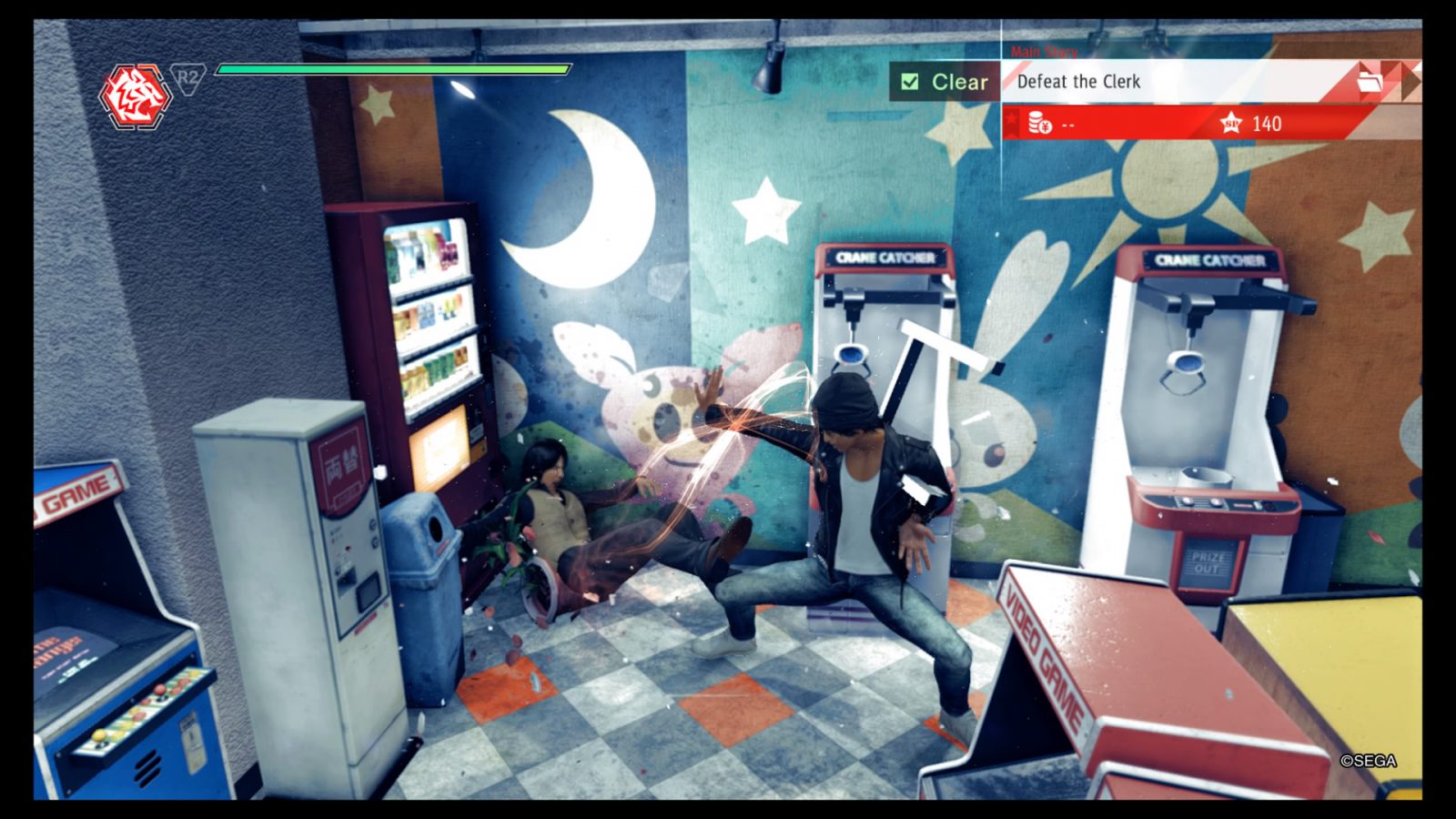 At first glance, Judgment looks a lot like Yakuza with a different character in the lead. Created by Ryu Ga Gotoku Studio, the developer of Yakuza, Judgment borrows liberally from the popular series. Its combat looks and feels extremely similar, its story deals with the shady machinations of various Yakuza clans, and it even takes place in Kamurocho, the fictional setting of Yakuza based on Tokyo’s red-light district, Kabuchiko. None of Yakuza’s major players feature in Judgment, but they’d hardly seem out of place if they showed up. Yet Judgment isn’t quite a Yakuza game. For all the many similarities the games share, Ryu Ga Gotoku Studio clearly wanted this to be a different experience, although it’s not quite different enough. Still, it’s a decision I respect, even though it doesn’t work in the game’s favor.

It’s familiar fare for anyone who’s played a Yakuza game before, but that’s not necessarily a bad thing. Yakuza’s soap opera stories have always been the highlight of the games, and Judgment just feels like an equally soapy procedural spin-off. The twists and turns of the plot rank up there with the best of the Yakuza games, though your character, Takayuki Yagami, doesn’t hold a candle to Yakuza’s Kiryu Kazama. He’s a much more straightforward tough guy archetype than Kiryu, despite his compelling and oh so melodramatic backstory. Still, he did grow on me as the game went on, as did his supporting characters. 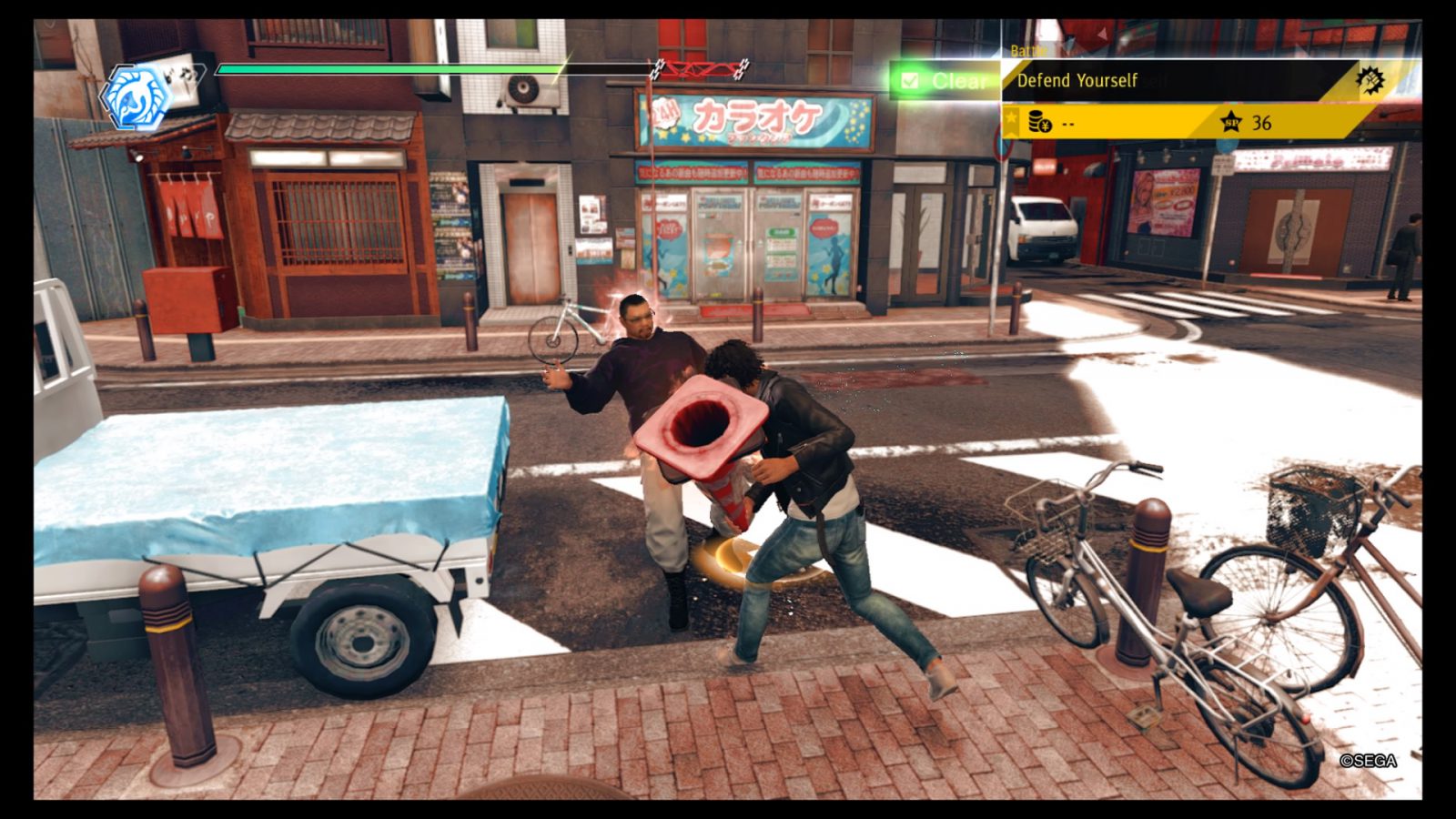 When he’s on a case, Yagami works both with his old law firm and his new parter, a childhood friend who’s also a member of a Yakuza family. These characters are fairly interesting across the board, though none of them really left a big impression. The Yakuza series has long had a problem with representation, somehow always finding a way to shoehorn insensitive jokes into the games and keep women sidelined in their stories. Judgment does a bit better in that regard, putting some women at least near the spotlight, though they still absolutely take a back seat to the game’s male characters. While I didn’t run into any of the transphobia that plagued Yakuza titles, some of the background chatter from pedestrians is inexplicably misogynistic, and Yagami himself makes at least one terribly ignorant comment about a homeless person he meets early in the game.

Before the time that Judgment is set, Yagami was a promising lawyer, but quit his job when he got a client’s murder conviction overturned (an extremely rare occurrence in Japan), only for that man to quickly be arrested and convicted for another murder. Several years later, there’s another killer on the loose, leaving bodies with gouged-out eyes around the city, and Yagami seems to be the only person capable of solving the case. He’s since gotten himself an ill-fitting leather jacket and turned into a private detective, which in practice involves more back-alley beatdowns than it does actual detective work.

As exciting as the idea of playing as a private eye is, the game’s execution of Yagami’s detective work is its weakest aspect. Aside from the aforementioned brawls, Yagami’s investigations generally boil down to picking a few locks, quietly tailing a suspect, chasing another through the streets, and piecing the case together in conversation. Each of these plays out in a minigame that ranges from dull to tedious. Chasing a suspect on foot turns into a series of button prompts to jump over the traffic cones that absolutely litter the streets and dodge pedestrians, who always stand in one clump to your right, then one clump to your left and are totally nonplussed by people barreling toward them at full speed. The lockpicking minigame is basically an easier version of the one from Oblivion, where you use a pick to manually lift the lock’s pins. It’s a decent enough game, but it gets old quickly. The worst is when you have to follow someone without them noticing you. These events drag on for minutes (which feel like hours) as you slowly walk behind your subject, pressing a button to duck behind a car or sign whenever they turn around. 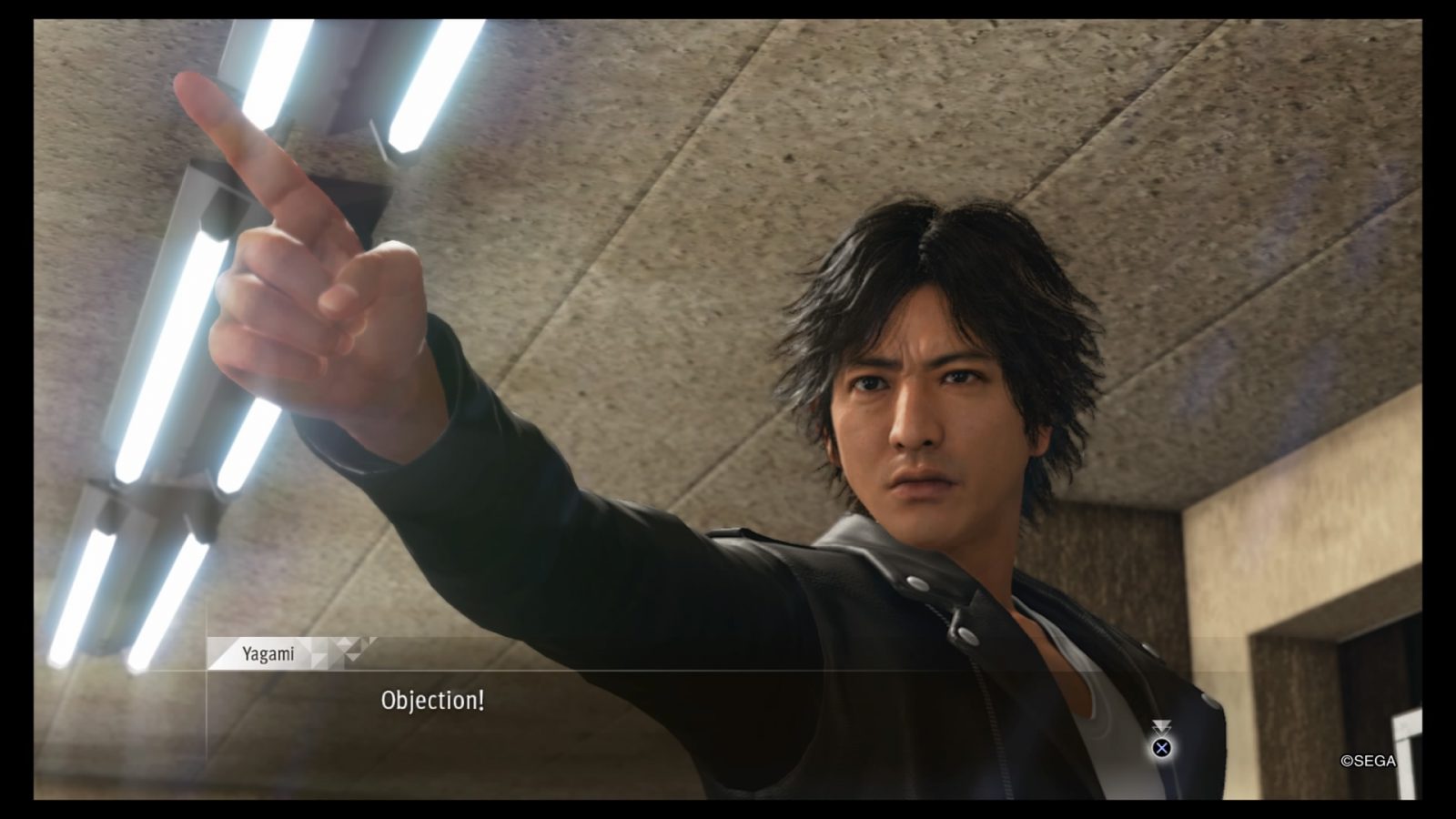 There are moments when all this tedium does turn into some more interesting detective work, when you’ll have to question suspects or use the evidence you’ve gathered to put together a case. Neither of these totally works, but they do give you the chance to actually think about what’s going on and make some strategic choices. I was really into them in the beginning, but the more I did them, the more I realized how much their effect is undercut by how forgiving they are. If you ask the wrong question or use the wrong piece of evidence, the absolute worst case scenario is that you’ll miss out on some bonus XP and have to choose again. It was the only part of the game where I felt anything like a detective, but the illusion was shattered the second I deviated from the right path.

I have the suspicion that Yagami is actually less interested in being a detective than he is in getting into random fights with Yakuza. To be fair, he’s not usually the one who initiates the fight, but I’ve never known anyone who wasn’t looking for a fight to find one every 15 yards or so. If you’ve played Yakuza, there’s nothing new here. Kiryu similarly found himself under attack every time he turned around, but his status as a renegade Yakuza at least gave that some context. It’s hard to see how Yagami has time to run a business when he must be nursing his newly-bruised knuckles every time he gets back to his office.

The combat itself feels like a stripped-down version of Yakuza’s. Yagami can fight in two stances: one for taking on groups and one for solo opponents. Switching between them trades range for power, but they don’t feel all that different. I didn’t find either style very satisfying; they both felt flailing and lumbering at the same time. Each button press will trigger a sequence of animations — two palm strikes or a forward step and kick — rather than one action, which makes it hard to know where an attack ends so you can set up a combo. Not that it matters too much. Yakuza’s combat has never been that strategic, but here it’s at its most button-mashy. You do get some fun new moves — most notably, the ability to jump off a wall and unleash an attack so strong that I spent every battle I could just bouncing from wall to wall like a deranged Spiderman. 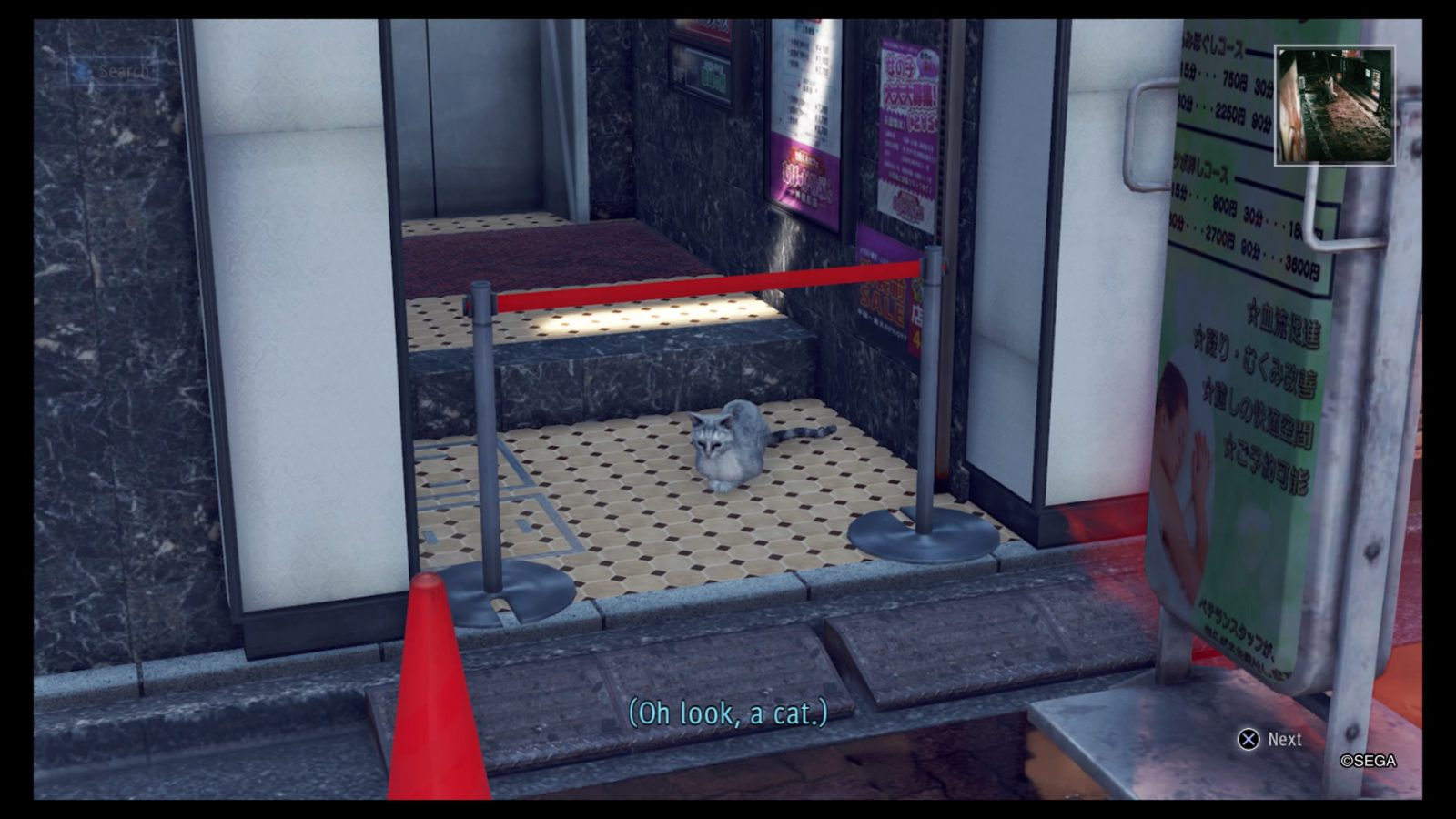 If there’s one thing that works in Judgment, it’s Kamurocho. The district has always been one of the stars of the Yakuza series, but without the likes of Kiryu to hold the attention here, it becomes the main attraction. In some ephemeral way, Kamurocho didn’t feel quite as alive for me in the beginning as it did in the Yakuza games, but the way Yagami relates to other people in the neighborhood made me feel more connected to it as time went on. Throughout Kamurocho, you’ll run into certain NPCs who you can become friends with. Aside from some who you’ll win over by buying items from them, you usually build these relationships by just having repeated conversations or doing small favors. It feels much more natural than the typical process in games of buying friendship by showering NPCs with gifts.

You get some small mechanical bonuses from friends, like when they occasionally jump in to join you in battle, but the best part about the system is just how it makes Yagami feel like a real part of Kamurocho. He’s not, like most video game protagonists, just a nexus of action, a force moving through the world making things happen. When he connects with people in the neighborhood, he becomes a part of their lives, reinforcing the idea that they do in fact have lives, rather than just being props in Yagami’s story. I got unexpectedly invested in helping a sushi chef understand his boss’s idiosyncratic vocabulary and trying out experimental meals for an aspiring cook. The more of these friendships you take time to build, the more Kamurocho starts to feel like home. If Yagami is friends with the president of a company that runs steakhouses, an American doing a terrible job of fitting in, and all of the clerks at Poppo stores across the city, their presence makes Kamurocho feel real, and catching the killer on the loose feel all the more important.

The effect never came together quite enough for me, though. As much as I might care about the various weirdos who inhabit Kamurocho, and be interested in the procedural story at the game’s core, it was just too oddly paced, too disjointed, too full of absolute drudgery for me to get really invested. There are only so many random street fights, so many long stretches of time where I was just running back and forth between story-advancing conversations, that I can take before it feels like the game is actively pushing me away from what I like about it. Judgment’s version of Kamurocho may be worth a visit, but, unlike in Yakuza, I didn’t want to stay there.

Judgment feels too beholden to its Yakuza roots, weighed down by overreliance on combat and half-baked detective mechanics. While its plot is engaging, nearly everything that it adds to the Yakuza framework is for the worse, and it shines most when it puts the spotlight on the people of Kamurocho rather than the game’s protagonist.

A committed indoor kid, Bryan moved from Pittsburgh to Los Angeles for a prettier landscape to ignore. They can be lured outside with promises of taco trucks and film festivals, and enjoy trawling through used book stores for works on the occult. Bryan has been gaming since the SNES era and is a sucker for good pixel art.
Related Articles: Judgment
Share
Tweet
Share
Submit