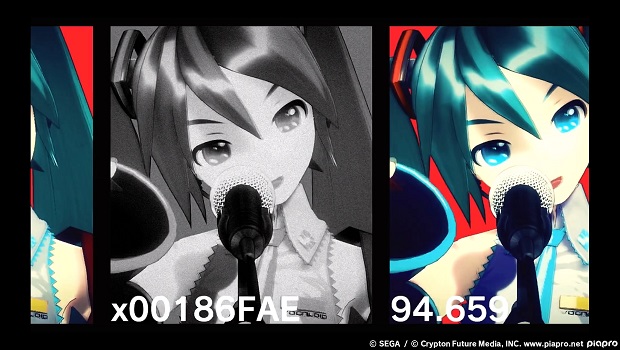 I miss the music game scene over here. Back in the Rock Band/Guitar Hero heyday, I used to love seeing dozens of my friends play with plastic peripherals and having a good time strumming fake guitars or singing terrible karaoke. While the rhythm genre isn’t what it used to be in the west, it’s flourishing in the east. Korean titles like DJ Max and Pump it Up are continuously updated, and Japan has constant Dance Dance Revolution and Beatmania IIDX releases. Likewise, Japan’s international synthetic superstar, Hatsune Miku, has her own arcade game, and the series’ most recent title, Hatsune Miku: Project Diva Future Tone, is finally out in the west through the PlayStation 4. With more than a couple hundred songs, snazzy visuals, and unique charm, Future Tone’s PlayStation 4 version is a perfect arcade port and an excellent rhythm game that everyone should try.

Introduced in 2007, Hatsune Miku was a new voice in the Vocaloid software program, a 2004 application that let users type lyrics and melody to create synthetic voices to sing. In Japan, she was received positively and became one of the most prominent Vocaloid add-ons to date. While she’s popular in Japan, she doesn’t get too much attention within the United States, but has starred in Toyota commercials and on Late Night with David Letterman recently. The Project Diva series is a result of Hatsune Miku’s “career”, curating the best Vocaloid songs from her and other Crypton-created models.

As you can see, he’s really confused at the whole thing.

Hatsune Miku: Project Diva Future Tone adapts gameplay from its arcade source; with a music video playing in the background, little symbols will pop up, and an indicator designates when you need to press them. By pressing the correct face or d-pad button on your controller, you’re awarded points based on accuracy, with cool, good, bad, miss, and wrong (if you manage to tap a wrong button during a prompt). This game adds a new feature in the form of slide notes (where you have to flick a certain direction with your analog sticks in order to score points), and notes where you have to press 2, 3, or all 4 face buttons. While you have a standard life bar that depletes or replenishes based on performance, you must be able to grab a majority of points by the song’s end (usually 50 or 60 percent) in order to clear the song. The two easiest difficulties (easy and normal) also include chance time mechanics, where you must be able to hit most notes in a section and then get at least a good rating on the last note in said section in order to rack up a huge amount of points. This mechanic isn’t found in the latter three difficulties, which makes it a training wheel to prepare you for harder material.

It might look simple now, but in a minute you’ll be as confused as Hachune Miku.

The game is simple in practice, with Future Tone’s arcade inspirations making the game slightly streamlined compared to previous titles. However, the game goes from mind-numbingly easy to excruciatingly hard very quickly, and you’ll be looking at the game over screen constantly on higher difficulties. Thankfully, Future Tone has a practice mode where you can hone your skills on particularly tricky portions of any given song. For veterans, hard mode is available from the start rather than unlockable, with extreme and the new extra extreme difficulties for a song accessible after a hard playthrough.

Yeah, there’s a song based on the RACING game Outrun.

While the console Project Diva games are known for an extensive song list choosing the best Vocaloid songs, Future Tone ups the ante with over 220 songs included across two DLC packs. The initial download includes two songs, with Future Sound and Colorful Tone comprising everything else. The former includes greatest hits from past Project Diva games while the latter includes songs from its chibi spin-off Project Mirai. For a little under $60 (you get $7 off if you purchase both packs together), this is a great value considering this game has more songs than every western Hatsune Miku game combined. It also helps that there’s something for everyone interested in Vocaloid, from the hard-rocking Senbonzakura to classics like I’ll Miku Miku You (For Reals) to memes like the Nyan Cat song. Plus, we finally get a full chart for Ievan Polkka after five games and endless amounts of waiting! You might not enjoy all of the songs the game has to offer, but there will be that one ditty that has you tapping your toes, wanting to go another round long after you failed for the fifth time.

Protip: If the song is from CosMo, GOOD LUCK.

Paired together with the music are the impressive looking visuals. Being the prettiest looking Miku title, Future Tone benefits from the PlayStation 4’s technology by emulating modern arcade-level graphics. There’s a lot of things going on in the background, and while pretty much every video is focused on a soundstage, there’s enough variety to make the experience entertaining. Miku and her friends are expressive and have very fluid movements when dancing in the music videos, so much so that a common feature of these games is the ability to watch songs without playing the game through playlists. The eye candy of the backgrounds is gorgeous to look at, and songs like Hello, Mr. Earthling and The Intense Voice of Hatsune Miku really display this gorgeous aesthetic. Gameplay never slows down (which is a necessity in fast-paced rhythm games), and everything looks smooth and crisp.

Rounding out the experience are modules, Vocaloid costumes that are unlocked by earning in-game currency during gameplay. There are literally hundreds of modules to unlock, and while they have no bearing on gameplay, they’re a nice incentive to save up currency or get better at a song with which you’ve been having trouble. It’s not for everyone, but collecting as many costumes as possible can be a pretty nice challenge to play a few more songs. There’s a few references to notable Hatsune Miku events and even some Sega costumes peppered in here and there, notably a Space Channel 5 module modeled after Ulala. (On a side note, we need another sequel to Space Channel 5. Make it happen, Sega!)

The only real flaws in the whole package are the lack of an official English translation for lyrics and the omission of a couple features in the mainstay games. During gameplay, lyrics are displayed on the bottom of the screen. However, they’re in Romanized Japanese, which means most players in western areas won’t really need this feature. It would have been great to have an official English translation for the songs (especially since F 2nd and X included these), but it’s just a minor quibble in an excellent experience. As this is an arcade port, we also don’t get to see things like Diva rooms (which have you interact with Vocaloids a la Fire Emblem Fates or Pokemon) or edit mode (where you can make your own sadistically hard charts). Due to the volume of content, however, this issue is easily forgiven, giving players exactly what they want with none of the fluff.

You wouldn’t know from the screenshot, but this song is about you getting brutally murdered if you aren’t happy. No, really!

Hatsune Miku: Project Diva Future Tone is everything you love about J-pop. Its infectious music, snazzy visuals, and accessible yet challenging gameplay will have you shouting for an encore.

Elisha Deogracias is an aspiring accountant by day, freelance writer by night. Before writing for Gaming Trend, he had a small gig on the now defunct Examiner. When not being a third wheel with his best friends on dates or yearning for some closure on Pushing Daisies, he's busy catching up on shonen manga and wacky rhythm games. Mains R.O.B. in Smash. Still doesn't know if he's a kid or a squid.
Related Articles: Hatsune Miku: Project Diva Future Tone
Share
Tweet
Share
Submit