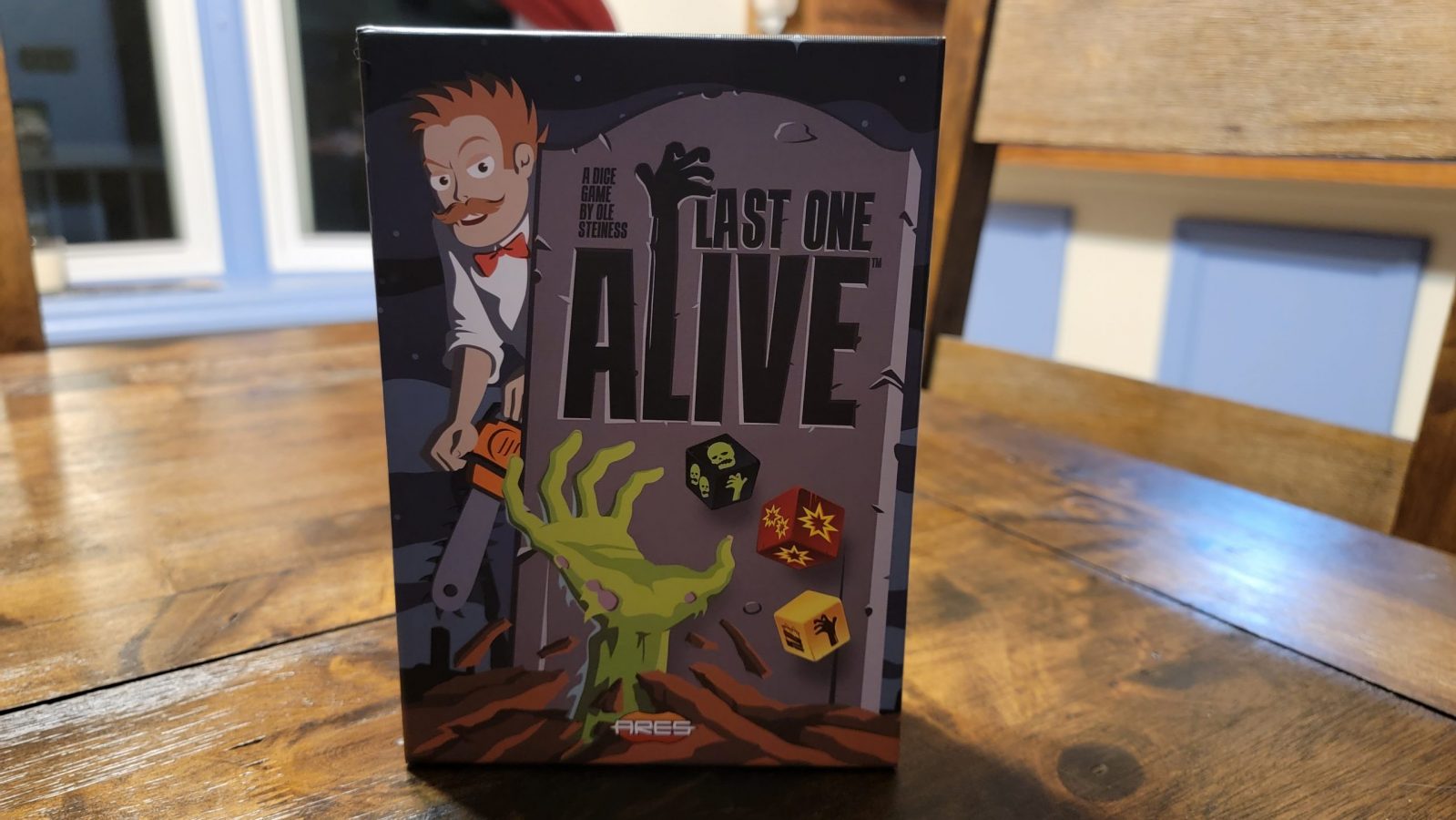 Last One Alive is a fast-paced, incredibly fun 2 to 5 player experience in which players compete to survive an ever-growing zombie apocalypse by being complete jerks to each other. Based around the use of dice, players will find themselves fighting off zombies, gathering supplies to help against future attacks, and ruining other players’ turns by using them as zombie fodder.

Quick to learn and play, Last One Alive is small in size and can be played on nearly any surface using the box for the dice rolls, making it ideal for trips or to take to a friend’s house. All that is needed for a round of Last One Alive is 19 dice, 10 cards, and 26 tokens (if playing with 5 players, less otherwise), although there are a few more pieces included for variants of the game including an additional 17 tokens.

The premise is simple; you and the other players are caught in a zombie apocalypse and must figure out how to be the last player standing. To do so involves fighting off the zombies that attack you along with throwing as many zombies as possible at other players in hopes of them being devoured first. To fight off zombies you must use items you gather, create barricades, or take them down with a gunshot. 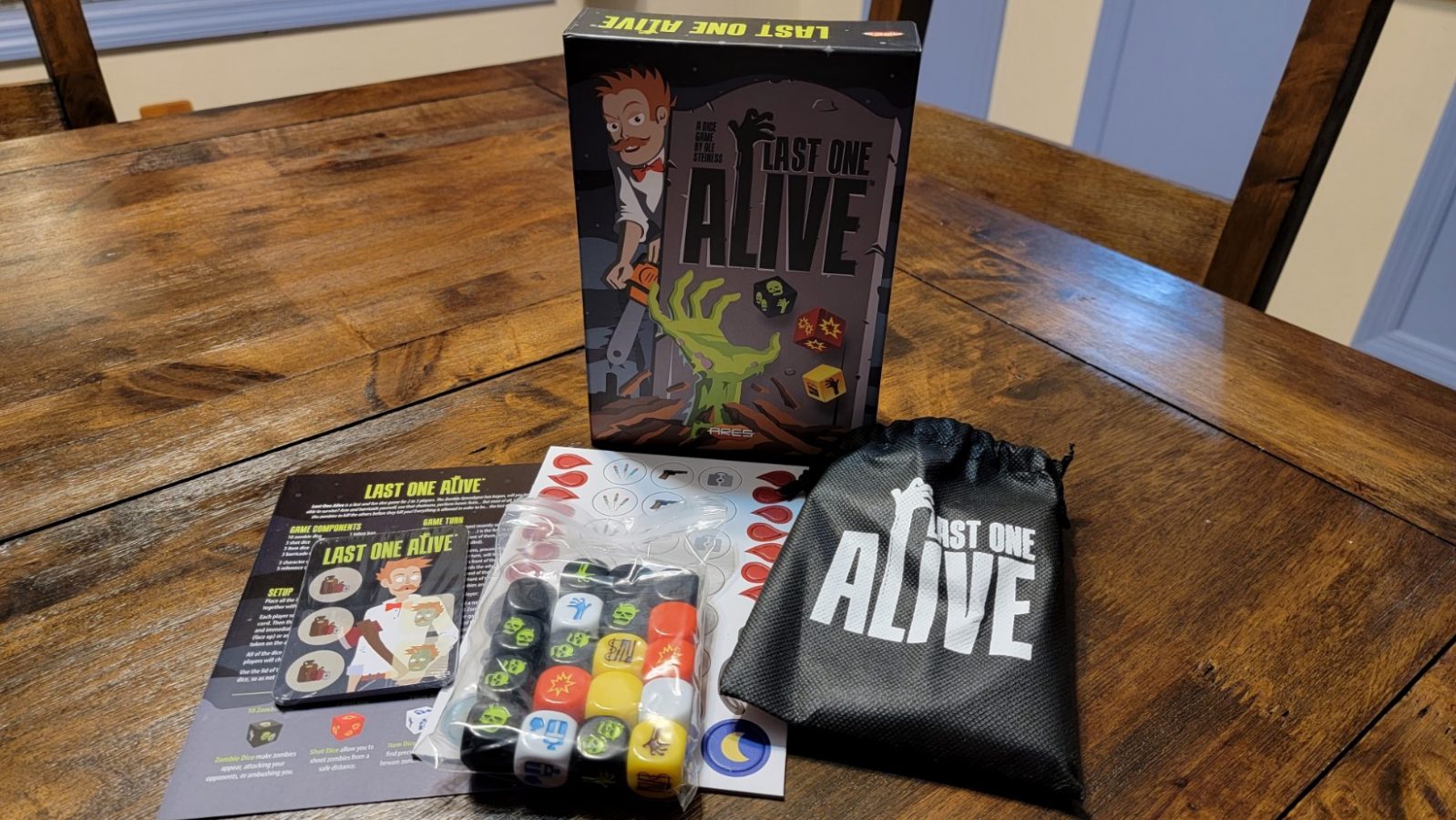 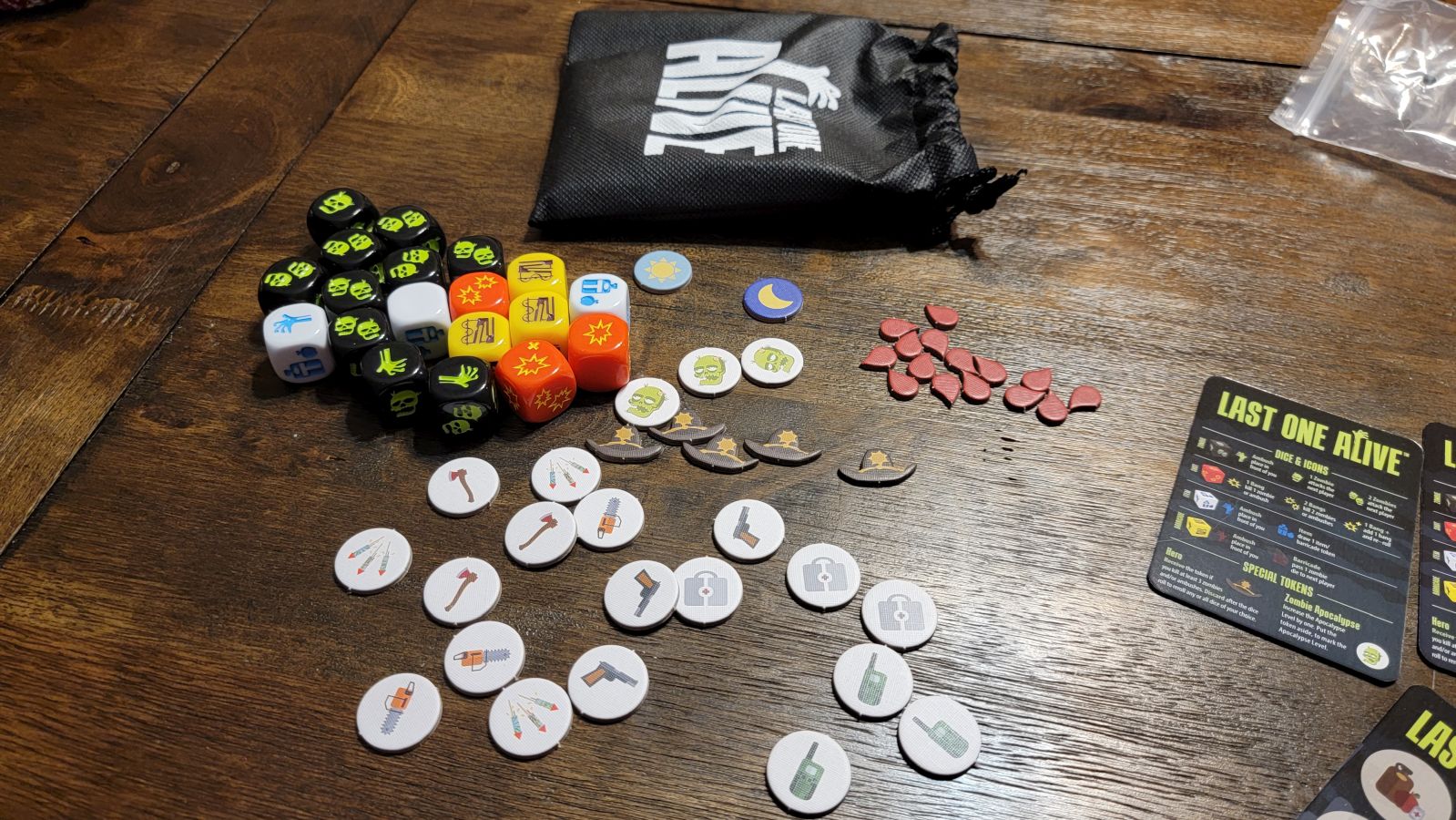 Before I explain how to play, I must explain the contents of the game. There are five character cards, each featuring a different character although there is no difference gameplay wise based around who you choose. Each character card has three item spaces on it and two zombie spaces. Once you choose your character you then take one of the 5 explanation cards, which provides a cheat sheet as to what all the dice and item tokens do.

The 19 dice are separated out into 10 zombie dice, 3 item dice, 3 shot dice, and 3 barricade dice. Each die has several options on it and determines how play will proceed each round. Zombie dice either have no zombies, one zombie, two zombies, or an ambush; shot dice has no shots, one shot, two shots, or one shot + which allows players to roll again and tally up their shots or to continue rolling as long as they continue to land on one shot +; the barricade dice either provides one barricade, an ambush, or nothing; and the item dice provides either an item – which allows you to pick an item out of the item bag, an ambush, or nothing.

The 18 item tokens are used to thwart off zombie attacks and are two sided, providing players with a choice each time they gain a token. One side contains an item, such as an axe, medikit, flare, gun, radio, or chainsaw, while the other side provides a barricade. Tokens are placed in a black bag and drawn at random and then placed on the character card, with no more than three allowed to be held by a player at any given time. Items have special effects on the game and tend to have different effects depending on if you decide to use an item before a roll or after a roll. For example, a gun token allows you to double the number of shots you roll in a turn if used before you roll or allows you to re-roll a shot die again if you are unhappy with your first roll. Once an item is used, you must discard the token. Inside the bag are also three zombie tokens, which when drawn increase the difficulty of the game.

There are five hero tokens, which are gained anytime a player defeats three or more zombies in one turn. Only one hero token can be held by an individual at a time and allows the player to re-roll all or any number of dice once if they are unhappy with their roll. The hero token must then be discarded. 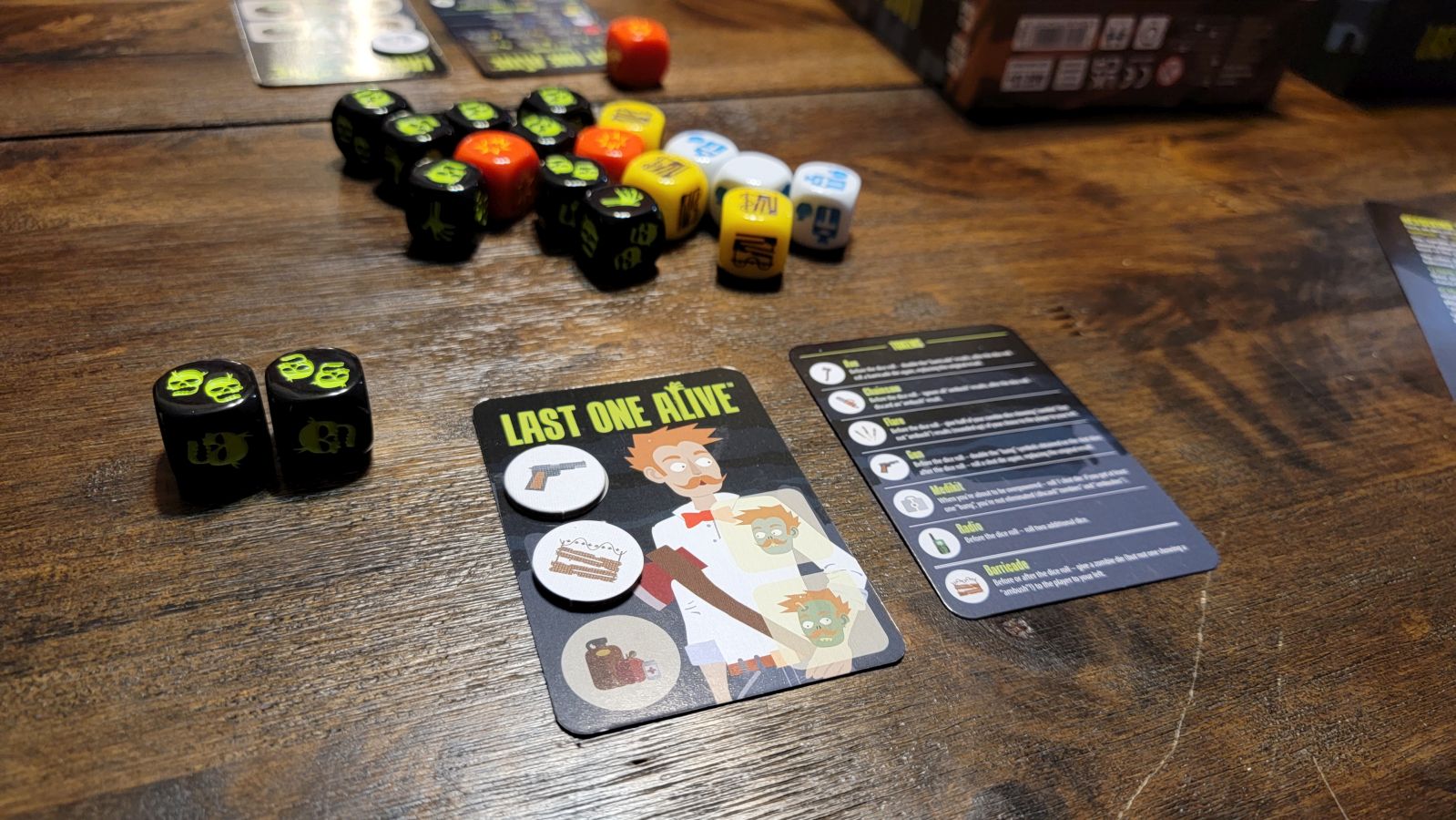 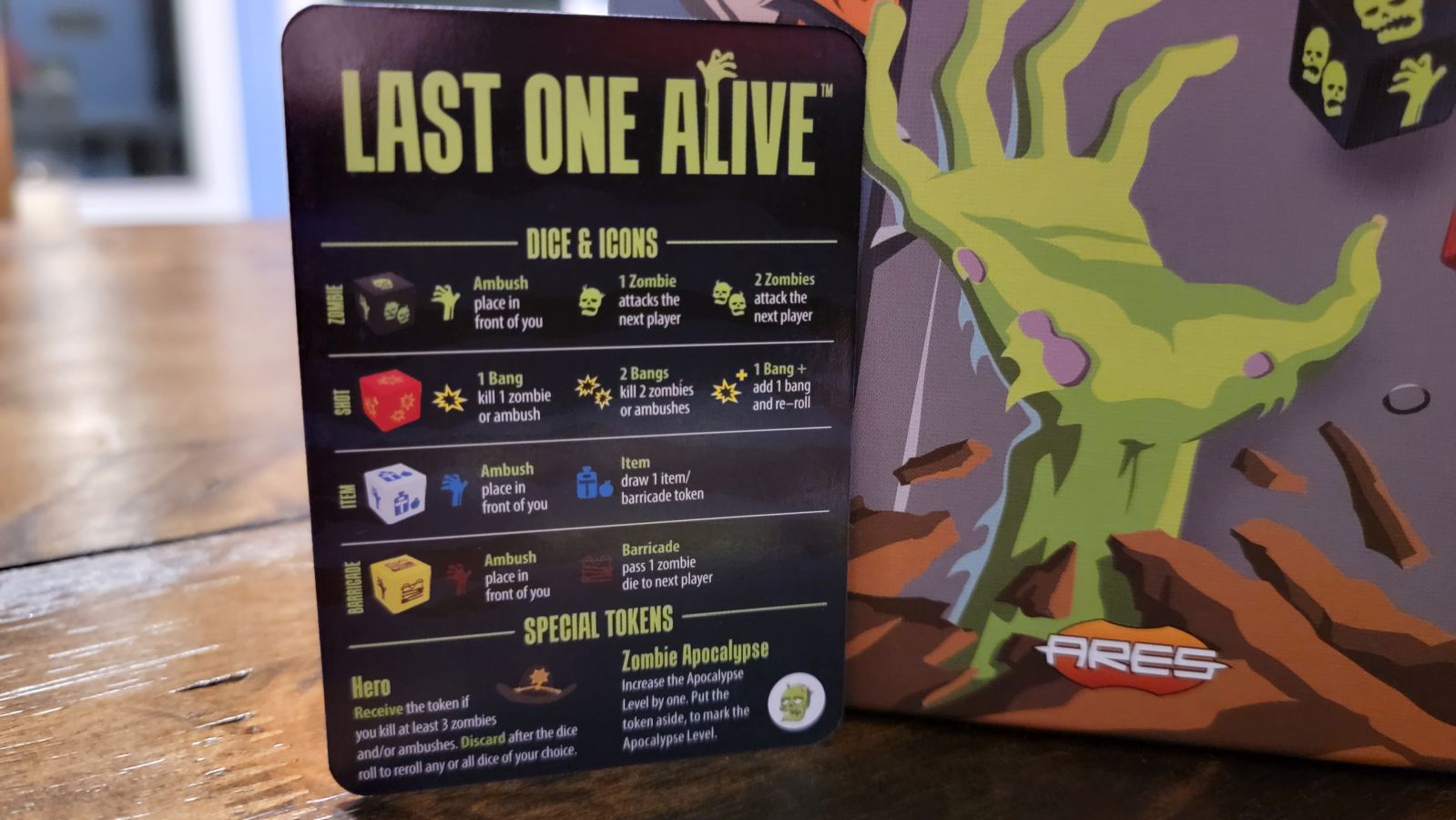 Play is simple, the last person to see a zombie goes first (not figuratively, well – hopefully), and then play proceeds to the left. At the beginning of the game the zombie apocalypse level is set to one, so each player must place one zombie die in front of them at the start of each turn. The player then chooses four dice from the dice pool to roll. Players are allowed to choose any combination of zombie, shot, item, or barricade die to roll. The goal is to take down the zombies currently attacking you and then, if possible, make the other players begin with as large an attack as possible. If a player cannot defeat all the zombies in front of them on their turn, then they do not survive and are out of the game.

Zombies can be taken down by the shot dice or a barricade. One shot is required per zombie and will return that zombie die to the dice pool, while a barricade will push that zombie to the player on your left. If at any time you roll an ambush then you must fight off that zombie that round, and it cannot be pushed to another player.  On any turn you can choose to roll a zombie die, which may end with an ambush on you but more often will provide extra zombies which can then be pushed to the player on your left.

There is a nice tension between players throughout each round as no one is ever sure of what a player may throw at them to thwart their survival odds in their next round. Additionally, if at any time during play a zombie token is drawn from the bag, then the zombie apocalypse level raises and the number of zombies a player must place in front of them at the start of each turn increases, up to four in a regular game setting and five during one of the game variants.

Only one token exists which can save you in a near death situation: the medikit. A player with the medikit gets one last chance to survive when there are too many zombies for them to fight off with their dice rolls. By using the medikit the player is given the opportunity to roll one shot die and if they land on a shot then they survive that round, and all dice are placed back in the dice pool. The token must then be discarded. 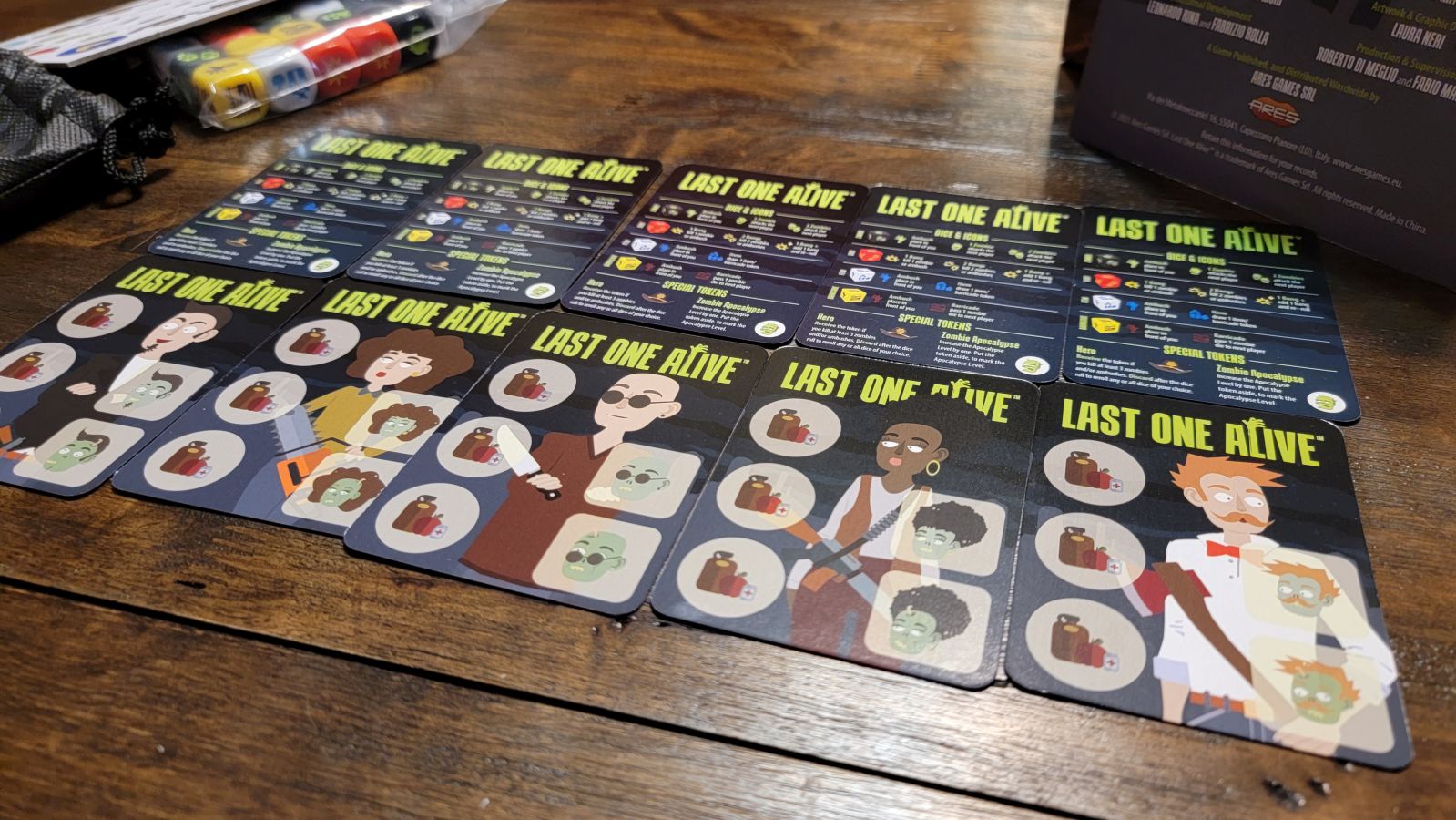 Aside from learning what the individual tokens are capable of, Last One Alive is quick to learn, but tough to master. Players must think strategically, both planning on how to survive future attacks and how to take down the other players. The game is incredibly fast-paced and will normally be over within 15 or 20 minutes unless players decide to use one of the variants.

Personally, I preferred playing using the rules of two variants at once, which made the game harder but also increased each player’s survivability. One variant increases difficulty and involves a day and night token, while the other involves blood tokens and provides multiple lives for each player.

To play using the day/night variant you must place the night token in the bag at the beginning of the game and when it is drawn the zombie apocalypse meter is temporarily increased by one. After a night token is drawn, you then place the day token into the bag. Once the day token is drawn then the effect of the night token is nullified and the night token is discarded. The second variation uses blood tokens which are placed on the character card over the zombie spaces which are otherwise not used. Each token represents one life the player has and once both tokens are gone the player is considered on their last life. Each time a player is unable to fend off a zombie attack they lose a blood token but are not out of the game until all three lives are lost.

By adding both the blood tokens and the day/night tokens to the base game I found quite a bit more enjoyment as not only was the game harder, but the blood token variant provided me with more time to experiment with tactics. The addition of multiple lives also created a new layer of tension as the competition becomes much more fierce when a player is on his last life and another player still has multiple. That said, I do suspect that these variants, especially the multiple lives variant, are best for smaller groups of two or three, rather than when five players are playing at once as the larger the group you have, the more chaotic the playthroughs will be.

Last One Alive looks deceptively simple from the outside but proves to be a challenging and rewarding competitive experience. Easy to learn but impossible to master due to the unpredictability of what other players may throw at you, the game feels different with each playthrough and is over quick enough to get in multiple playthroughs an hour. Packed in a small box, Last One Alive is the perfect game to take on trips or to a friend’s house for a quick game during some downtime.

Richard Allen is a freelance writer and contributing editor for various publications. When not writing for Gaming Trend you can find him covering theatre for Broadway World, movies and TV for Fandomize, or working on original stories. An avid retro gamer, he is overly obsessed with Dragon's Lair. Chat with him via @thricetheartist on Twitter and @richardallenwrites on Facebook and Instagram.
Related Articles: Last One Alive, Tabletop
Share
Tweet
Share
Submit