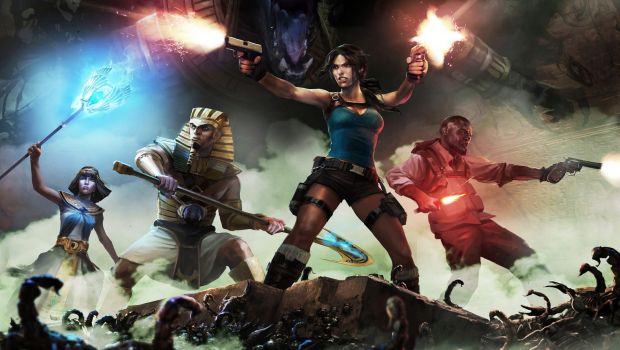 Like all great myths, the story of Lara Croft and the Temple of Osiris begins with betrayal and sibling rivalry.  So the legend goes, the God King Osiris and his wife Isis ruled over ancient Egypt with wisdom and benevolence.  The real myth of this betrayal was that Osiris’s brother Set created a beautiful box that he would give to any man that could fit inside it.  When Osiris was tricked into stepping into the box, Set sealed it and cast him into the Nile.  In this game, however, Osiris was instead cut into many pieces, the bits scattered and only able to be reassembled with the Staff of Osiris.  To ensure this never happened, Set and Horus were trapped in the Temple of Osiris for all time…until Lara Croft found them.

As Lara opens the Temple, fellow Archaeologist Carter Bell races in to try to beat her to the treasures.  Unfortunately, the whole Temple is a trap.  As Carter touches the staff, the deception is sprung, cursing Lara and Carter, trapping them with freshly-awakened Isis and Horus.  Now they must recover the many pieces of Osiris from the Temple and reassemble him with the Staff before Ammit, the Devourer of the Dead, consumes their souls for all time.

Danger around every corner

Temple of Osiris has a few improvements that improve gameplay significantly.  With a nod to games like Diablo, Temple now features a loot system that has players collecting rings, amulets, and outfits each with randomly assigned stats.  Some rings may increase your weapon damage, but will also drop your overall defense.  Common rings have single traits, often balanced with a negative, but a legendary ring might have as many as five positive powers, with no downside. Amulets have unique traits, offering special attacks on top of the four selectable weapons you can swap in with the D-Pad.  Replacing the Relic system from Guardians, as you pick up diamonds, you’ll charge up a meter that eventually activates the amulet.  These accessories convey powers like poison attacks, fire, and others for as long as you don’t take any damage.  These powers persist regardless of weapon, making your chosen character devastating on the battlefield.

Gems may charge up your special attacks, but it is also currency.  There are chests throughout the central hub, as well as at the end of most of the tombs.  Each chest has a cost, but it’s not just a financial transaction, there is also a slot machine element embedded here.  Roughly 25% through the game you’ll gain access to a mystical device that can change the weather and the time of day.  These boxes are also changed by the weather and time, granting better gear based on the specific elements that appear on plaques near them.  It’s a neat twist, as is the variable cost of the boxes.  Do you save up for the intricate and ornate box for the chance at something Legendary, or do you go for the cheaper and more immediate gratification.  It’s a slot machine that will keep you coming back long after you complete the game.

As it was in Lara Croft and the Guardian of Light, Lara has a grappling hook that can allow her to reach otherwise inaccessible areas.  This time around Lara is joined by two Egyptian gods, both of whom can summon an impenetrable shield bubble (which can also serve to slow time for specific puzzle elements, or even as a stepping block for Lara to reach higher locations), as well as unleashing a beam of light via the Staff of Osiris.  Serving as a fantastic sweep and clear weapon, as well as a light source for reflection puzzles, this new mechanic is joined by a bit of tightrope walking.  Lara can use her grapple to hook onto golden rings, as before, but now both Egyptian characters can leap onto the rope and use it as conveyance.  These few changes inform a great many puzzles, adding variety to the overall formula.

The biggest improvement for Temple of Osiris comes courtesy of a more compelling setting, as well as better script.  Filled with pitfalls, traps, and gargantuan boss battles, this game will keep you on your toes, and not just with tricky puzzles this time around.  Solving a puzzle mid-fight with a giant armored cobra easily 50 feet tall spitting fireballs at you is exhilarating, and that just scratches the surface of what Temple has to offer.

It has been three and a half years since the launch of Guardians, and Crystal Dynamics has honed their engine a great deal.  There is a solid upgrade in terms of presentation here.  The game runs at a gorgeous 1080p resolution with a buttery-smooth 30fps regardless of how many players and foes are on screen.  New lighting and smoke technology makes fire and shadow dance across the landscape more realistically, reacting to the environment.  There are still some jagged shadows that, for whatever reason, Crystal Dynamics decided to showcase in a few in-engine cutscenes, but overall it’s a noticeable bump.

As before, there are optional Challenge Tombs that offer up some truly devious puzzles.  All four characters are able to drop explosives, creating opportunity to bounce the giant steel explosive balls around the map to create all new head-scratchingly difficult challenges.  There are also moments for tandem grappling, jumping puzzles, and plenty of platforming challenges injecting variety into the game.

If there is a test for cooperative locked-camera titles like this, it’s my wife.  She’s not a hardcore gamer by any stretch, but the pickup-and-play mechanics had her swatting scarabs and murdering mummies in no time.  The game is essentially a twin-stick shooter, using the right stick to aim and the right trigger to unleash your fury.  Without having to control the camera, my wife was able to just sit back and enjoy the puzzle solving and gameplay without a lot of headache.

With four players on the field this time around, SquareEnix has turned to their other properties for DLC opportunities.  A Hitman and Deus Ex themed pack are coming in January, available at the Community Chest in the central hub of the Temple of Osiris.  Additional tombs, costumes, weapons, and treasure will head our way in the available season pass, for sure.  In addition to DLC, there will be community challenges and rewards available here – we’ll have to see how those pan out after the game launches on December 9th.

Khepri is just one of the many massive bosses in this game.

All told, like its predecessor, there is somewhere between eight and ten hours of gameplay here.  That said, before every tomb you are given a series of challenges to tackle for new and exciting loot, so there are plenty of reasons to come back.  Put that together with this being a great couch co-op title and this could be your new four-player distraction when friends are over for a bit of gaming.  I know, for my money, there is a great deal of hilarity in “accidentally” pulling the grapple rope out from under my friends as they carefully inch across a gap.  Since there is no penalty to respawn other than resetting the aforementioned amulet power bar, it’s all in good fun.

Lara Croft and the Temple of Osiris

Lara Croft and the Temple of Osiris’s new mechanics and graphical improvements make it a must-have for any couch co-op fan. The devious puzzles are matched by a better story and bigger bosses, making for a fun four-player romp that should keep any gamer entertained.

Ron Burke is the Editor in Chief for Gaming Trend. Currently living in Fort Worth, Texas, Ron is an old-school gamer who enjoys CRPGs, action/adventure, platformers, music games, and has recently gotten into tabletop gaming. Ron is also a fourth degree black belt, with a Master's rank in Matsumura Seito Shōrin-ryū, Moo Duk Kwan Tang Soo Do, Universal Tang Soo Do Alliance, and International Tang Soo Do Federation. He also holds ranks in several other styles in his search to be a well-rounded fighter. Ron has been married to Gaming Trend Editor, Laura Burke, for 21 years. They have three dogs - Pazuzu (Irish Terrier), Atë, and Calliope (both Australian Kelpie/Pit Bull mixes).
Related Articles: Lara Croft and the Temple of Osiris
Share
Tweet
Share
Submit