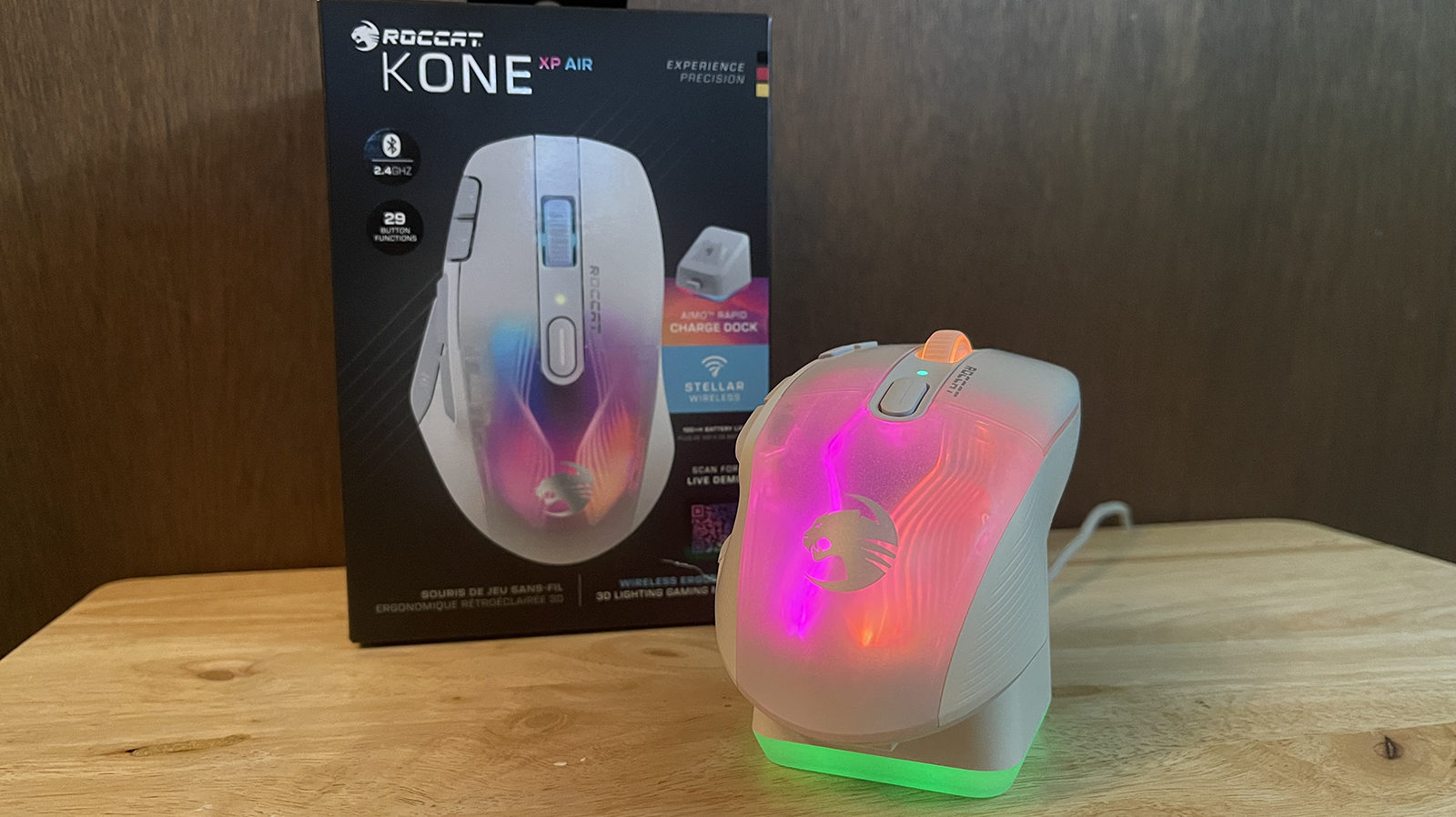 Back in April we got our hands on the Roccat Kone XP gaming mouse and it did not disappoint, scoring a stunning 100 from our Editor in Chief. Well, we’re back again! Our friends at Roccat sent us the Kone XP Air so we could take a look at how it compares to the Kone XP now that it has finally gone wireless. This mouse will become available in just a few short days, so here’s what you need to know.

Right out of the box the Kone XP Air is stunning. We were sent the arctic white design (it is also available in black) which looks so slick. I’m not usually one for white hardware, especially when the rest of my setup is all black, but this mouse is definitely the exception. All of the black accents that were used for the side buttons, middle scroll wheel area, and the bottom of the mouse have been swapped out for an off-white/light gray, giving the Kone XP Air a very clean and neat look. 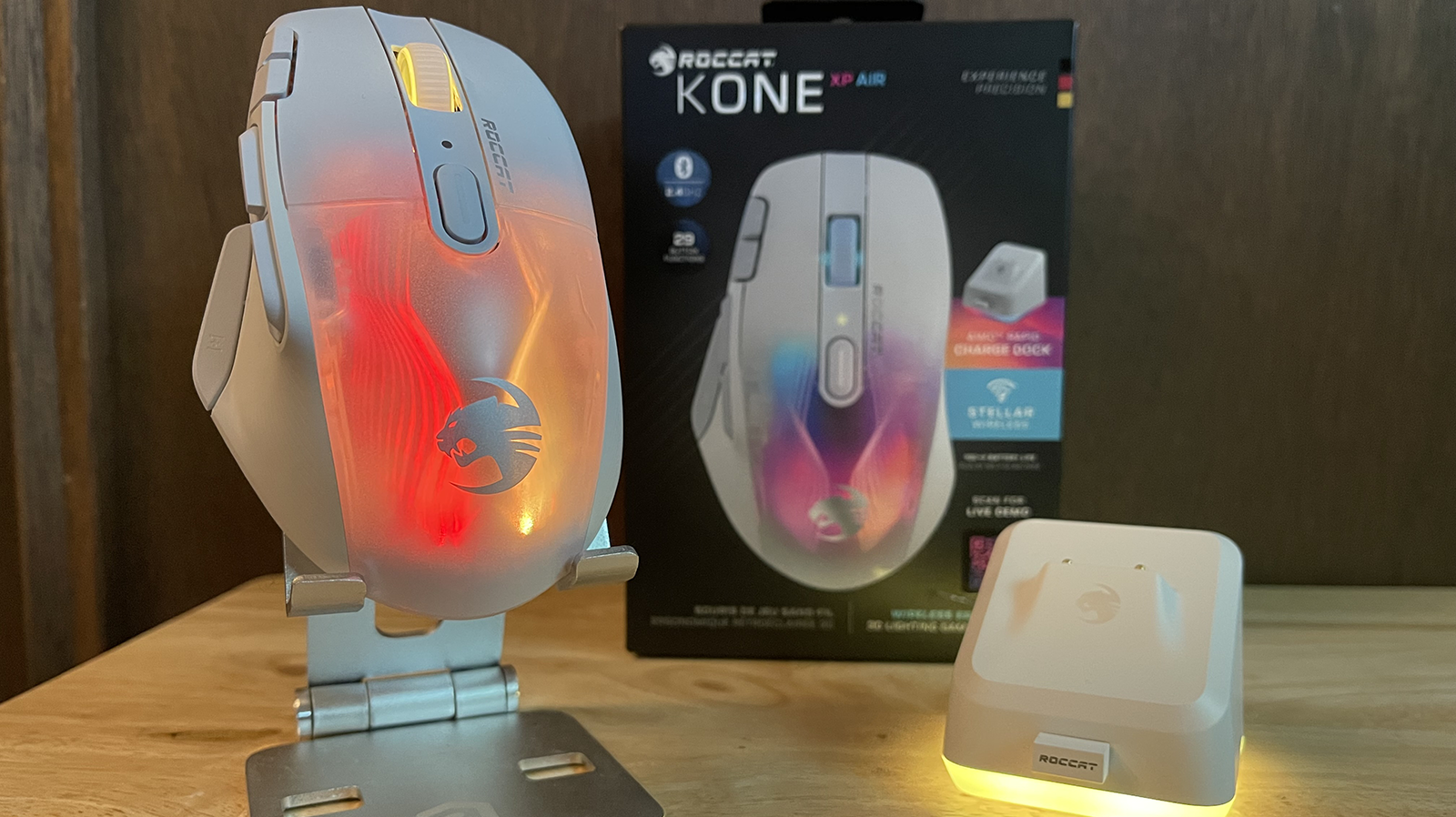 The Kone XP Air boasts an astounding 100+ hours of battery life (I literally didn’t charge it at all the first few days I used it) but when you need a recharge you have a couple of options. The Phantom Flex lightweight USB-C charge cable will be there for you if you need to charge while still in the game. The cable is long enough that you won’t be struggling with range, but it also won’t drag down your mouse, interfering with your gameplay. I play a lot of Rainbow Six Siege, and being able to still comfortably play while the mouse was plugged in was a huge plus. However, when you’re done for the day you can also recharge the Kone XP Air with the included Rapid Charge Dock. With this dock, it’ll take no more than a few hours to fully recharge your mouse from 0%. But rest assured, if you suddenly need to use the mouse again, 10 minutes of charge time will still get you about 5 hours of wireless use.

Like I said before, the Kone XP Air is a wireless mouse featuring gaming-grade 2.4GHz wireless via the included USB dongle. The dongle can be connected via the USB passthrough on the Rapid Charge Dock, however I preferred to plug it directly into my PC. The Phantom Flex USB-C cable is the same cable that is used to plug in the charge dock, so if I have the cable plugged into the dock, what do I do if the mouse needs to recharge? We all talk about cable management, well, part of that includes not having tons of extra cables sitting around the desk. But I also don’t always have time mid-game to unplug the cable from the dock to plug into the mouse. Are you picking up what I’m putting down?

You could also skip the dongle altogether – if your PC is compatible, that is, as the Kone XP Air can also be connected to many different devices via Bluetooth. While my PC doesn’t have Bluetooth capabilities, my laptop does. I have a Samsung Galaxy Book S and I was able to easily connect the mouse to my laptop with the simple press of a button. On the content creator side of things, if you’re like me and don’t have a second monitor but you do have a laptop in order to watch and interact with your chat, this comes in handy if you need to switch over to doing something on the laptop and then switch back to the PC. There’s a small switch on the bottom of the mouse that you can use to flip between using the dongle wherever that is plugged in and using Bluetooth, and also turning the mouse off when you’re not using it of course. The transition is pretty seamless, taking only a couple quick seconds for the signal to switch over and you’re back in the action.

Being a wireless mouse, some may question how responsive the Kone XP Air is when in game. Regardless of if you choose to go with Bluetooth or the USB dongle, you are highly unlikely to experience any issues with input delays as the response time is lightning fast. Your cursor will track smoothly and easily across the screen when using the mouse for day-to-day use and also feels very smooth when in game so you can make a quick snap to your target. The button clicks are also very quiet, especially when I compare it to my Logitech G502 and the scroll wheel easily spins without feeling like it’s grinding across the detents, which is also a big difference from the G502.

There are some features that I will likely never use myself, but all of the same buttons that were found on the Kone XP have returned on the Kone XP Air, including the Easy Shift feature that allows you to have 29 mappable functions. My favorite mapping feature has been putting my ‘lean left’ and ‘lean right’ in Siege on the two rear side buttons (#11 and #13 if you’re looking at Swarm) as they are now next to each other, which is so much easier for my small hands to reach instead of having to stretch my thumb up to the forward side button.

Of course, no hardware review is ever complete without talking about RGB. The 3D RGB inside the mouse doesn’t quite stretch through the main buttons like the Kone XP, but it still looks amazing nonetheless. I also loved that the charge dock also lights up and can be synced with the mouse and any other compatible devices using AIMO Illumination through the Swarm software on your PC. So if you have everything — the mousepad, mouse, dock, keyboard, etc. — you can configure light settings to make your display really pop! Something that I did find to be a nice touch while using the Kone XP Air is that when the mouse is being moved around, the RGB is dimmed so as to not take your focus away from the screen and then the brightness returns to normal when it’s not being used. While I do love all of the pretty lights, too much light gives me a headache. 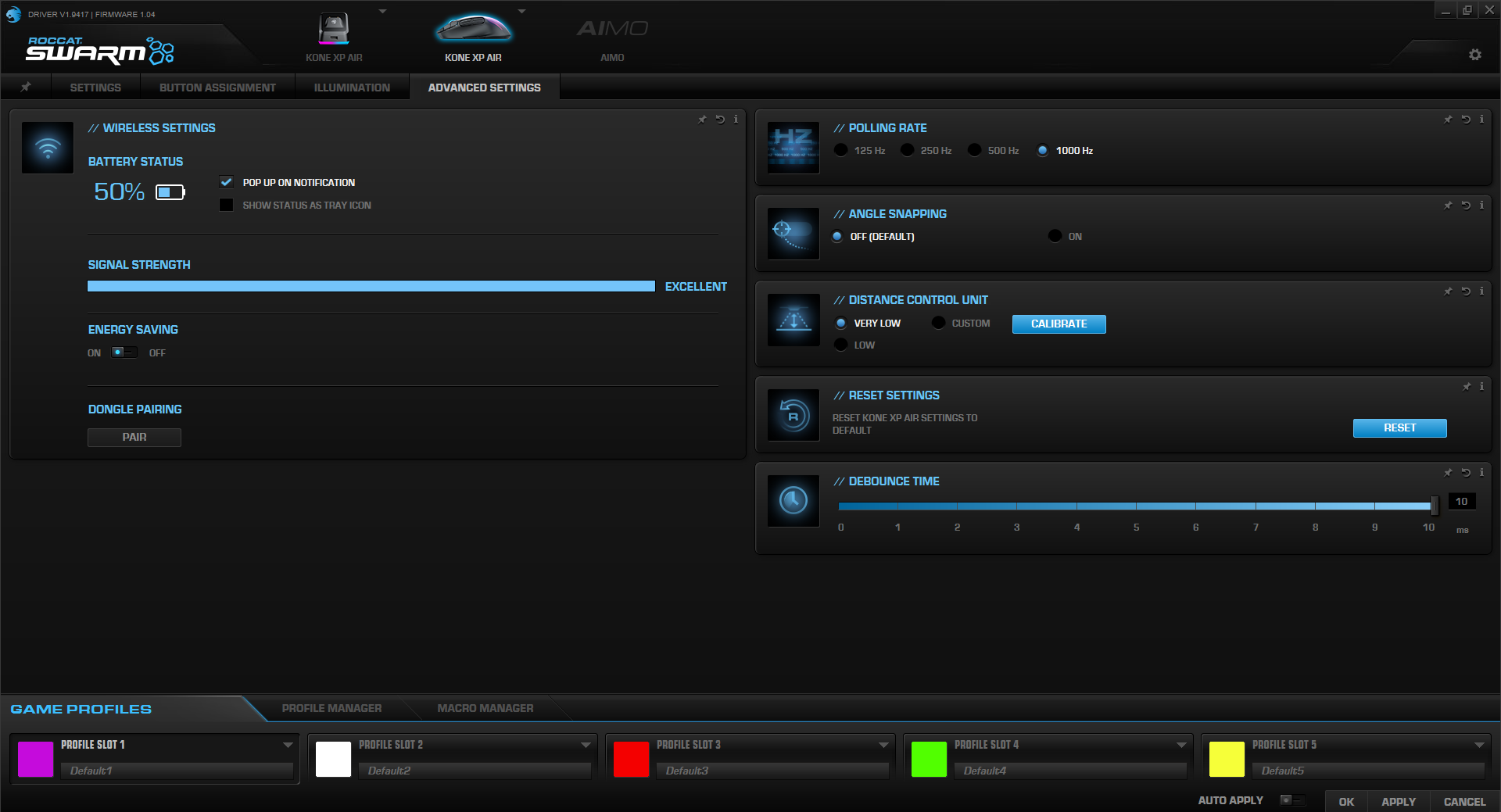 The Swarm application will help you keep track of and make adjustments to your Kone XP Air with the usual settings for button assignments, DPI switches, and more, but you can also monitor the mouse’s battery life and signal strength as well in the Advanced Settings tab. If you’re looking to save a little on your battery life there is an energy-saving option. You are also supposed to be able to adjust the illumination brightness of the dock and the mouse outside of using the AIMO Illumination feature, however I never noticed this taking effect on either device. I assume this is just a bug in the Swarm software and it will likely get patched in the future.

Aside from all of that, the rest of the Kone XP Air is pretty much the same as the Kone XP. It still uses Titan optical switches, heat-treated PTFE glides, and a 19k DPI Owl-Eye sensor and has a 100 million click life. The only other notable difference is that this mouse is a little more on the pricey side of things, sitting at $169.99 versus the Kone XPs $89.99 price point. And to top it all off the mouse comes with a 2-year manufacturer warranty, so your investment is protected should you ever need it.

This is peak performance with no strings attached, literally. The Kone XP Air looks slick and is so smooth. It's the perfect companion for the gamer but also the day-to-day user.

Cassie Peterson is an Editor for Gaming Trend but also a sporadic content creator and exceedingly average Rainbow Six Siege player. She goes by MzPanik on Twitter and Twitch and all of the gaming platforms.
Related Articles: ROCCAT KONE XP AIR
Share
Tweet
Share
Submit