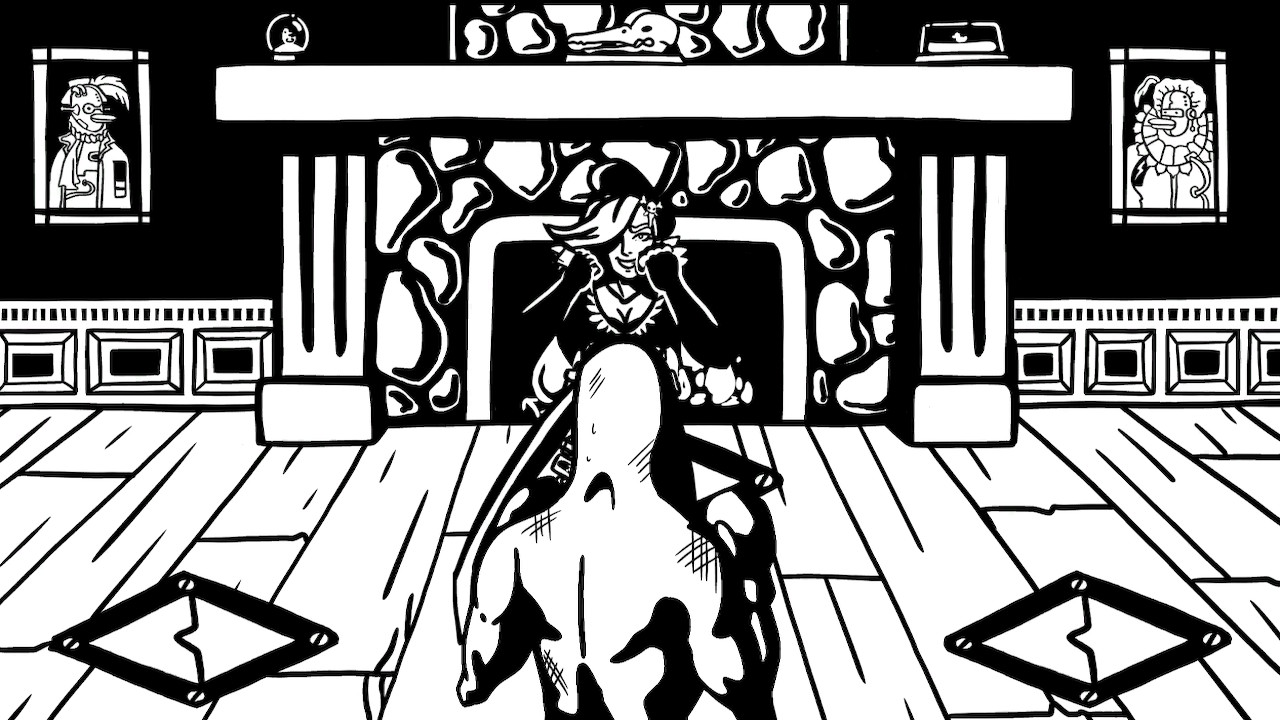 What do you get when you mix Punch-Out!! style gameplay with a Madworld aesthetic? Pato Box, a quirky yet challenging boxing game, is the answer.

Pato Box is the story of Patobox, a duck-man hybrid who boxes for a company named Deathflock. The story begins in the championship fight against the challenger Kilpatrick. It’s a pretty standard boxing match until Patobox feels a sharp pain in his back, which causes him to lose focus and lose the match. He soon ends up outside, left to bleed out, until he is rescued and wakes up in his room. Here you find Ms. Feather, a nurse who found you and saved you from death. She explains that in order to make your way to the boss of Deathflock and get answers for what happened to you, you must collect the emblems of Deathflock’s toughest fighters. This is where your journey of revenge and clarification begins.

There are two types of gameplay you encounter: traversing through 3D sections in order to access boss fights, and the 2D boss fights themselves. You play with a view from behind Patobox, who is 2D, as are all of the characters. It’s a pretty interesting concept having a 2D character move around in a 3D world, and Pato Box pulls it off well. Every level is drastically different from the others, each with their own charm and gameplay. For example, in the sewers you must rush through poisonous gas to turn fans on and overload the system so you can reach the boss. In the case of the casino, you have to gamble in order to collect 300 chips in order to buy your chance to fight. These sections aren’t the most entertaining, but they do offer a nice change of pace from constantly boxing.

The 2D boss fights are the best, and most infuriating, part of the game. The fights are challenging to say the least, and they will definitely test your skills. If you can beat any of them on your first try while going in blind, then more power to you. No two bosses are alike, and that is one of the game’s strong suits. Patobox fights uses jabs, upper jabs, dodging, and blocking; his enemies on the other hand, have more tricks up their sleeves. In no particular order, you will encounter grenades to deflect, lasers to dodge, energy balls to block, and much more. These seem like unfair fights for poor Patobox, but his disadvantages make victory that much sweeter. There is, however, one boss who actually fights as a true boxer.

The bosses are not only great challenges, but they are charming and creatively designed. Some of the gimmicks they employ are actually very clever, and I found myself impressed with how they worked as I played. Each boss has their own tells and patterns that you must learn to recognize if you want to succeed. It can be annoying dying to a boss when you don’t expect an attack or a barrage of attacks. At the same time, once you learn the signs and can counter them, there’s a rush of pride that hits. In addition to that, the bosses have three phases you must beat back to back, with each phase getting more deadly. My personal favorite fight was against the chef because he felt the most unique. There’s a lobster on the pot of stew between you two that telegraphs the chef’s attacks, which at first you may not notice. Not only that, but at a certain point in the fight, food and trash starts to occasionally drop from pipes nearby. You need to dodge into them to grab them, and then throw the food in the pot by doing a jab, or throw the trash into his face with an upper jab. After doing enough of either one, he will lean in to smell the delicious stew or lean in while trying not to vomit. That’s your cue to lay into him because he can’t be reached until he leans forwards.

Now, one of the most interesting aspects of this game coming to the Nintendo Switch: motion controls. When I saw that you could play with a controller the normal way or with motion controls, I knew I had to try the latter first. You hold one Joy-Con in each hand, making sure the fronts with the buttons are facing inward. If you want to jab, you flick the corresponding Joy-Con forward, or if you want to do an upper jab, you hold down the L or R button while flicking the Joy-Con forward. In order to dodge, you turn both Joy-Cons sideways in the direction you wish to move, but if you want to block, you turn them both sideways towards each other. This might sound like an issue if you want to play with the buttons, but there’s an option in the menu to choose which controls the game will register, and you can switch back and forth at will.

The motion controls are entertaining, but unfortunately they aren’t as practical as using a regular controller. The motion controls can work, and it’s satisfying when they do, but that doesn’t always happen. As you might expect from motion control gameplay like this, there are bound to be issues. Sometimes it can be hard for the game to register the exact movements, which can be troublesome. For example, I had times where I went to block an attack, but the game thought I wanted to punch, so I got hit hard. Sometimes the same thing would happen, except it just registered as me doing nothing, so poor Patobox would get rocked. I played through the opening fight with motion controls and even attempted the first boss with them, but ultimately had to give up on them. There were too many instances of commands not registering correctly, which resulted in unnecessary hits, and a build-up of losses. Once I switched over to the joystick and buttons, I fared much better, and won the fight after some time.

The designs and atmosphere of the Deathflock building and its employees are charming in their own right. Everything has a Madworld aesthetic to it, along with a cartoony feel to the characters. There is an exception to that cartoony rule, and he doubles down on a grim appearance. The sound designs is amazing as well, especially because it can become very important during some fights. The electric sparking sound of an antennae may signal a bolt striking, or a whoosh might help you time the block of a tank being swung around. Besides being useful in battle, the soundtrack of each fight is fun to listen to, and even adds to the tension. Be careful not to get lost in the music or you could break your focus and lose your fight.

Pato Box is a great nod to the fans of games like Punch-Out!!, as it challenges the player with intense boxing matches. This game will put your focus, reflexes, and pattern recognition skills to the test. Losing over and over again can get frustrating, but learning your enemies’ attacks and overcoming them is part of the experience. The pride of taking down tough fighters one by one inspires you to move forward, and I know that all too well. If you’re a fan of challenging games or even just want a Punch-Out!! reminiscent fix, then Pato Box will surely entertain you.

Pato Box takes the Punch-Out!! fighting style and gives it a Madworld aesthetic, resulting in an unexpectedly wonderful combination. The 3D sections aren't the most exciting, but the boss fights more than make up for that. Pato Box offers an intense challenge that will put your gaming skills to the test, but also potentially frustrate you at the same time.

Codi loves to play video games and watch movies. He will watch almost any kind of movie just to experience them. His ideas take inspiration from the shows and movies he watches, and games he plays. He also loves a good pun.
Related Articles: Pato Box
Share
Tweet
Share
Submit