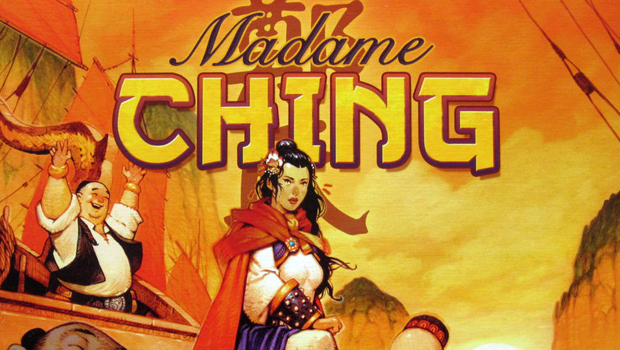 It is no secret that I like pirates, but I feel as though my exposure to South China Sea pirates has been limited. I mean, my exposure to real in-the-flesh pirates is non existent, but around these parts the romantic image of a pirate is a peg leg guy sailing a Galleon in the Caribbean. What I have been missing my whole life is the image of a revolutionary Robin Hood figure tooling around the South China Sea in a majestic junk. Fun fact that I didn’t previously know: a junk is a type of sailboat!

Madame Ching takes this under utilized theme and invites the players to set off on their own adventure pillaging and plundering. Players compete to accumulate the most fortune while learning the diverse set of skills needed to gain the respect of the feared Madame Ching.

The core of the game lies in the navigation cards and how they affect a player’s voyage on the game board. Players will collect and play these cards in an effort to reach distant and far lands. Each card is numbered one through fifty five, with different ranges of numbers being colored one of six different colors. The board can be kind of busy, but the important section is the sea spaces in the middle.

At the start of every turn, every player selects one card, out of a hand of four, to be played. These cards are revealed simultaneously and the highest valued card is resolved first. The played card is added to the end of a player’s voyage. If the number is higher than previous cards, the voyage continues and the player moves their junk one space on the board to the right. If the card is of a different color as well, the player’s junk will move diagonally down and to the right. If the card is a lower number, the voyage is reset and the junk returns to port. When this happens the player may take one mission tile that is of lower value than their current position on the board. These tiles award various treasures and gold.

When a ship returns to port, certain skills may be acquired. Some of the navigation cards have skill icons printed on them. When finishing a voyage, if three of the same kind of skill icons have been collected, an associated skill is gained. These skills offer the player a special ability, for example the navigation skill allows the player to draw one card, and permanently increase their hand size. 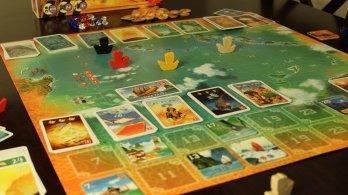 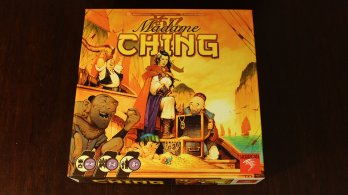 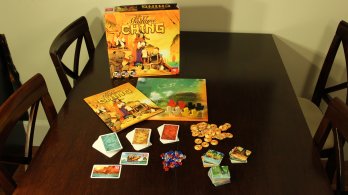 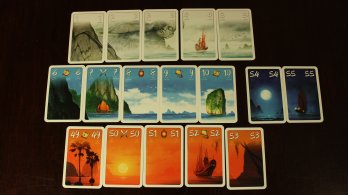 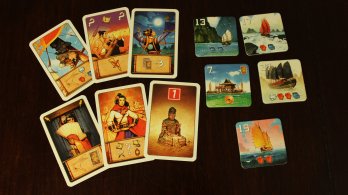 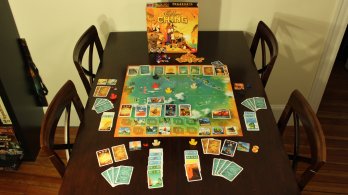 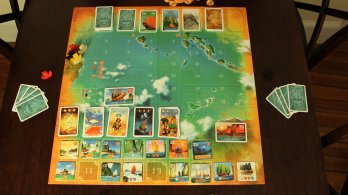 After a player resolves their played navigation card, they pick one of the available navigation cards at the top of the board. At the beginning of the round, one card is placed face down, and three are placed face up to form a pool of available cards. After all players have picked up a card, the round is reset and play continues.

The game ends when one of two conditions occur: 1) a player is able to gain all four skills and is awarded the China Pearl, an infamous pirate ship or 2) when all of the mission tiles have been claimed. Each player then adds up all of the points awarded by treasure, goals and skill cards. If a player claimed the China Pearl they are awarded bonus points, as is the first ship to reach Hong Kong (the farthest down and to the right locations). The player with the most points is declared the best pirate and the winner.

At first Madame Ching’s board looks rather busy and uninteresting, but then after playing you realize that it is rather thoughtfully laid out. Each game component has a corresponding place on the board, and the art ties everything together nicely. The quality of the game components are top notch, from the wooden junk markers to the thick cardboard tiles. One of my favorite touches is when looking at the sailing cards laid out in ascending order the art on each card forms a larger picture.

The rules are straightforward to learn, and simple to teach. The map on the board, that initially seemed boring, turns out to simplify the value of a voyage, possibly the hardest concept in the rules to grasp. The rules book is well laid out with plenty of useful examples.

Some gamers turn their noses up at games that have two player variants included in the rules. I don’t entirely disagree with their opinion, but Madame Ching is a surprising outlier. The two player variant included in the rules is a borderline better game than the three and four player game. I was shocked. The three and four player games are still enjoyable, but I highly recommend the two player ‘variant.’ Games took about an hour regardless of the number of players.

Madame Ching is not drenched in theme, but the sea pirate flavor helps tie the mechanics together. Players are not going to be talking like Chinese pirates, but they are going to intuitively understand how the mechanics work. I don’t think I would have liked the game as much as I did without the lightly sprinkled theme.

This game shines with the simple choices presented to the players every turn. The choice of what card to play is easy to understand, but leads to some interesting choices of what will happen on future turns. The way the numbers interact with the colors also add to the challenge. It is not just how many cards someone can play, but how many colors can they play as well. While playing out one voyage, players must have a forward eye to the next voyage as cards not used will be the basis for the next set.

On the topic of cards, the addition of the skill mechanic leads to even more diverging choices. You may have the perfect order and color combo, but the skill icons might force you to save a card for a later voyage. This choice of continuing on or cutting out and restarting is rather rewarding.

Fitting right in to the family game genre, Madame Ching rewards solid play while still being enjoyable for all of the players. It is seldom that you feel like you are not making progress, and even at the end of the game, scores are hard to predict. There is a fair amount of player interaction, but the effect is subtle. Because cards are being drawn from a common pile, a strategic pick can seriously hamper an opponent’s voyage.

A noticeable problem facing Madame Ching is the noticeable lack of variation in repeated plays. The mission cards are somewhat random, but for the most part stay the same from game to game. The only variation is simply from the distribution of sailing cards. For the first few plays this does not seem to be an issue, but I worry if the game is going to become stale.

Once you realize the busy looking board is rather efficient and helpful, Madame Ching pulls players in with its rewarding and straightforward mechanics. I recommend this game to anyone who is looking for a fresh family weight Eurogame. There is enough depth to entertain hobby gamers while still being accessible for the most hesitant new comer. If you are getting tired of completing routes in Ticket to Ride or playing all of your meeples as farmers in Carcassonne, you should take a look at Madame Ching.

From Trading in the Mediterranean to FPS, I love games. While I grew up in a house without consoles, PC gaming and board gaming were a large part of my formative years, and continue to influence my life. In this golden age of board gaming, I have jumped in headfirst in to anything table top. As a ludilogical student, I love thinking about how games work, their mechanics, their elegance and most importantly, enjoying how fun they are. Favorite Board Game (at the moment): Twilight Struggle Favorite PC Game (base solely on play time): Tie between WoW and DII Fell free to email me: comments, concerns, questions, feedback, rants, and/or suggestions.
Related Articles: Madame Ching, Tabletop
Share
Tweet
Share
Submit