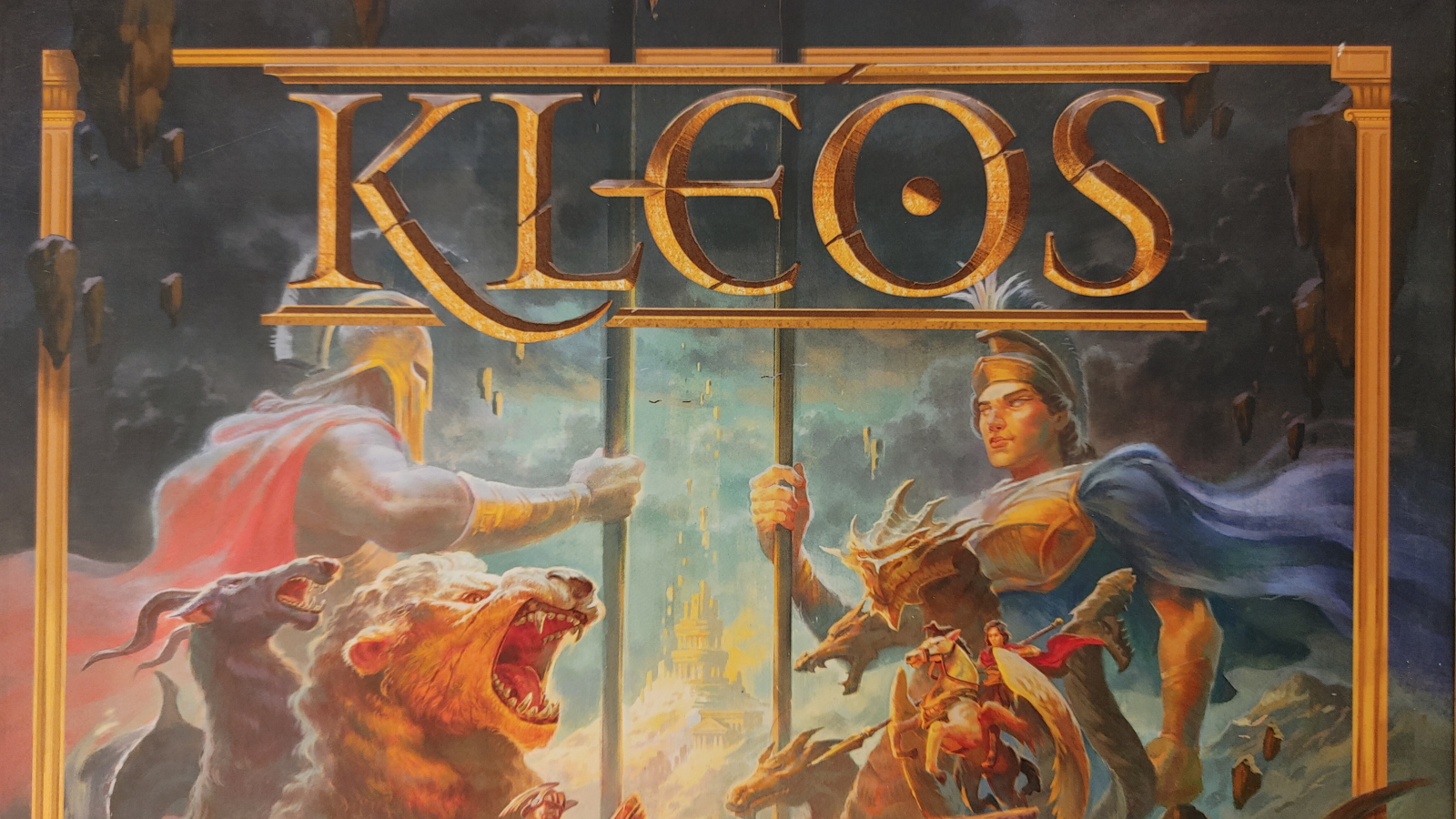 A new Greek city has been founded, Kleos, and the heavy hitters of Olympus have brought their champions and their legendary creatures to claim the honor of being the city’s patron, no matter the cost.

Kleos is a 2-5 player strategy game with asymmetric elements. Players can choose to play one of the major deities of the Greek pantheon: Ares, Artemis, Athena, Dionysus, or Hermes. Each god comes with a deck full of powerful abilities, a set-in-stone starting hand that sets the tone for their strategy, and a powerful, immortal champion of legend, like Heracles or Atalanta.

The game takes place over 3 phases: Dawn, the start of turn phase, Day, where the meat of the game happens, and Dusk, a sort of upkeep phase. There is a shared pool of weaker cards that each player uses, a set of powerful monsters that can be recruited from the seas outside the city, and a small deck of cards that represents Zeus’ blessing for any player falling behind.

Combat uses 14 custom dice, with 3 sides blank, 2 sides showing “success” and 1 side showing a “godly success”. Only Godly minions get to use godly successes, which is only earned in a handful of ways. Needless to say, finding ways to give Godly power to your minions is a pretty important power. So you grab a number of dice equal to your minion’s attack, and any tactics bonuses from nearby allies, and roll that many dice. If you beat the opponent’s defense, you kill it. In either case, the opponent’s minion can do the same thing back, rolling their minion’s dice and tactics to see if they can kill back. Any time anything dies in combat (or to powerful cards) then the killer gets a point. If an attacker overkills their target by 3 or more successes, then it’s a slaughter, which doesn’t allow for a retaliatory strike. This allows for safe combat, and an extra point. Of course, in the games I’ve played, the odds were fairly well against this, and I only saw a slaughter happen once or twice per game. 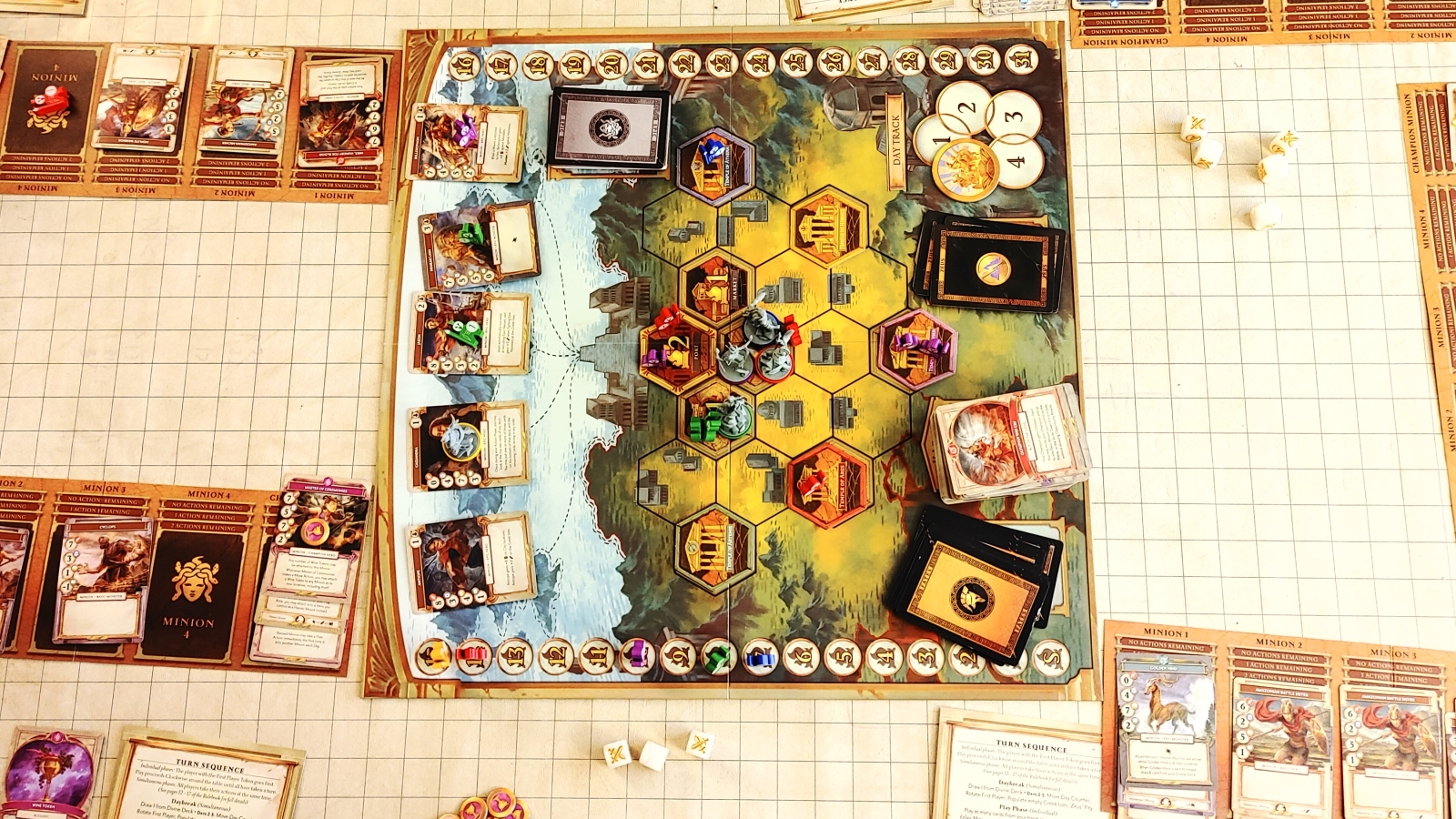 Each turn sees massive shifts in the board state. Very few minions you can summon are strong enough that they can’t be taken out with a champion, though a few cards can become keystones to the overall strategy of your god. What’s more, each player will always wind up with 4 or 5 cards at the start of each turn, so it behooves players to play as many cards as possible instead of holding cards in reserve. Because of this, each turn sees a full roster of minions get whittled down to almost nothing, then refilled the next turn.

Champions are often the strongest minions a god can field, and the champion is always in play. That means that if they get killed, they just respawn immediately at their god’s temple. They also can’t get slaughtered, cursed, or have other regular bad things happen to them. This means that a god always has some sort of combat to do with a powerful monster on every turn, no matter how poorly things go otherwise.

The game has a lot to like. As a mythology nerd, seeing these very cool creatures and heroes (with mostly lovely art, I might add) fight each other is interesting. The idea of gods and goddesses fighting over a city, resulting in a massive war that may just level that city is also very much in line with Greek Mythology. 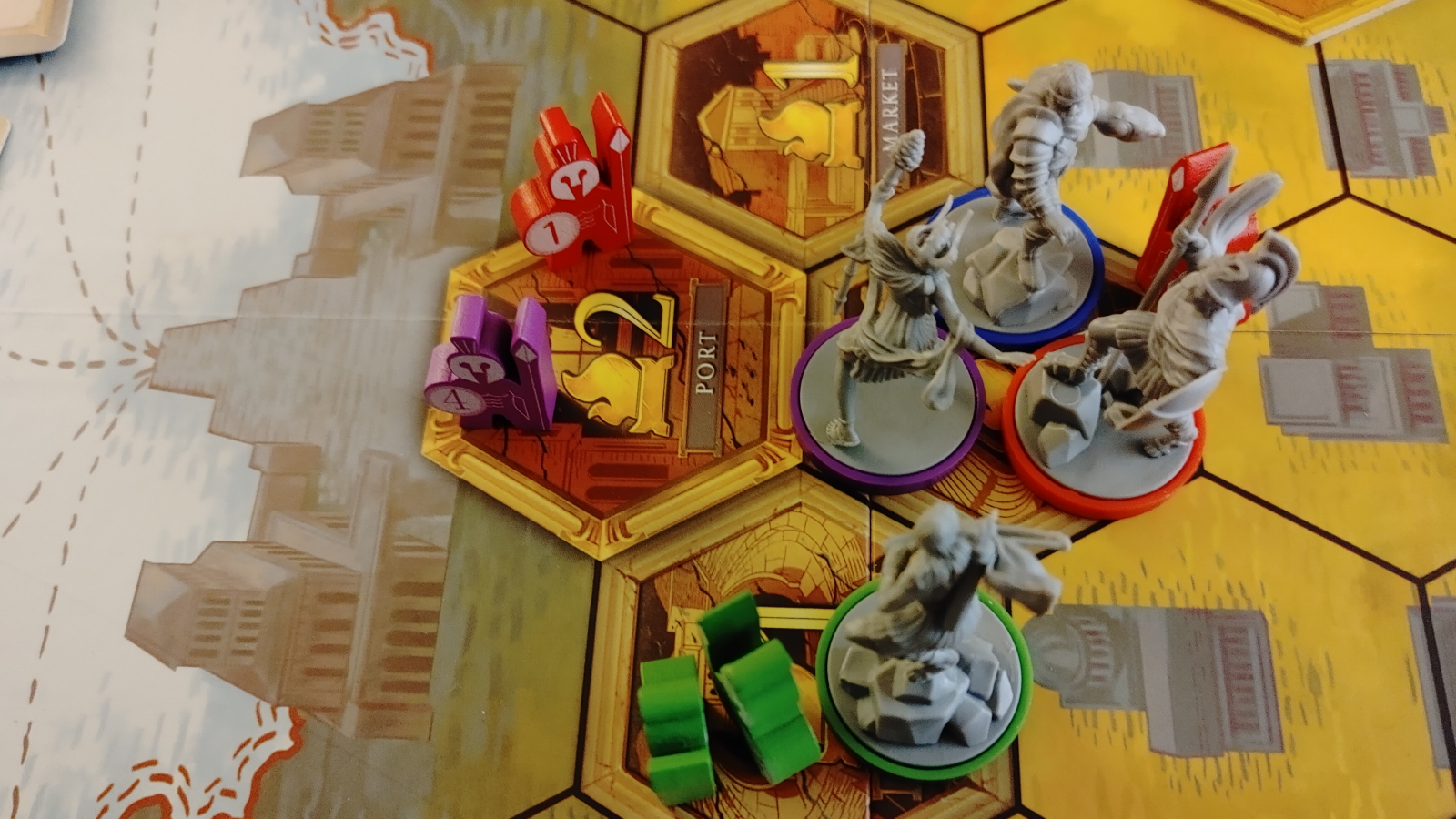 My favorite part of the game design might be the comeback mechanic. Zeus’ deck of cards are reserved for players 5 or more points behind. These cards are incredibly powerful, and can change the tipping point of almost any single combat. However, they still have to be played well in order to have the best results. However, despite the bonus power, players who are behind will still have a hard time catching up, since there’s only so many points up for grabs each round.

Being an asymmetric strategy, means that some gods have an inherent advantage. In particular, Ares, the god of war, seems very good at, well, war. His champion, Leonidas, has just enough of a stat advantage to the other champions that trying to fight him is always a dicey proposition, lest you feed Ares a steady supply of points.

On the other hand, I found the hunter mechanic that Artemis uses just wasn’t strong enough to win her fights, since it requires her units to go it alone and doesn’t give her many options to get in and out of combat safely. Since the tactics advantage offered by pairing units together is one of the few ways to increase a unit’s power, losing access to that leads to Artemis’ fighting power feeling lackluster. 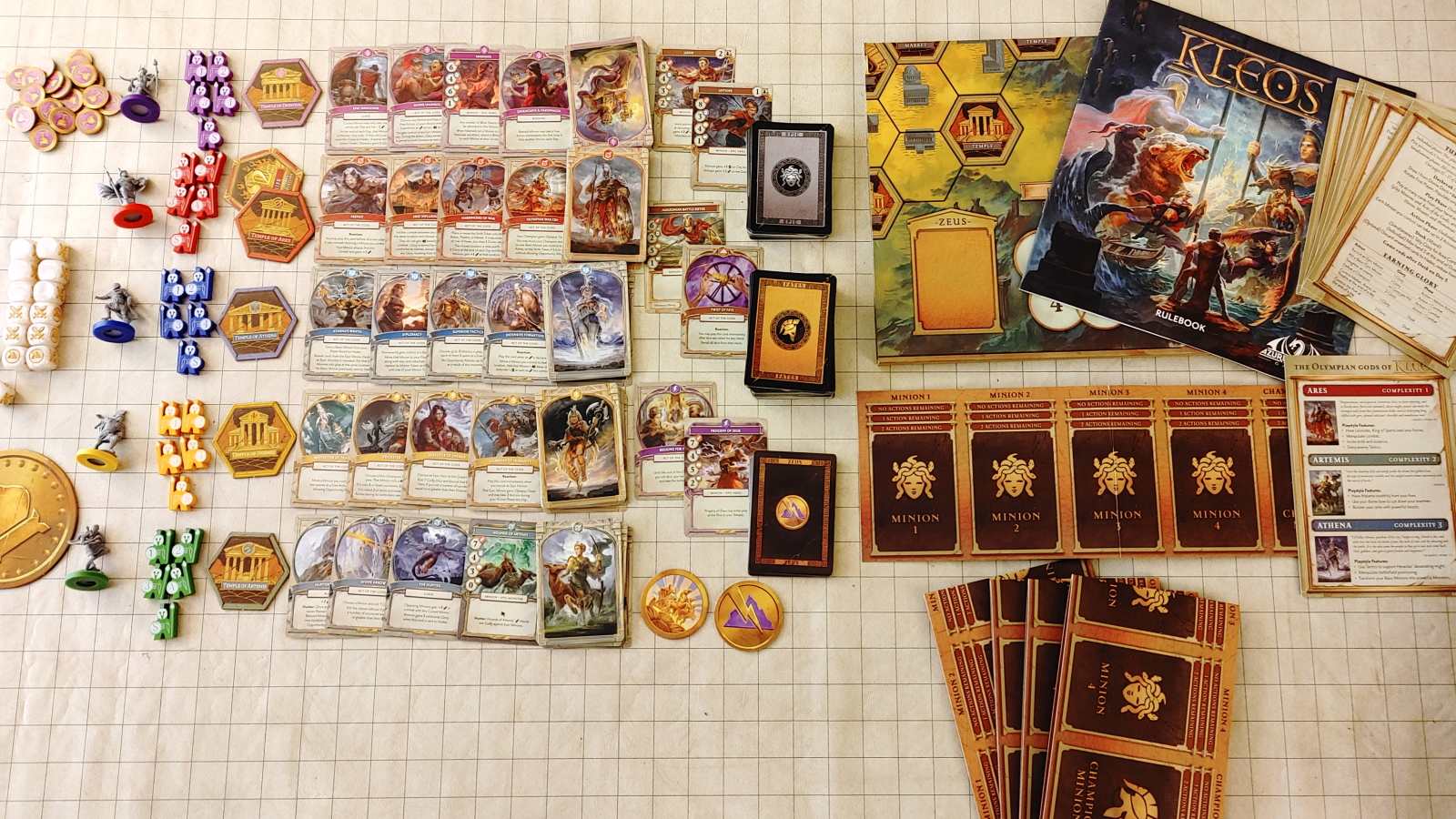 Of course, since the majority of cards in play are from shared pools of cards, these differences only have a minor impact on the overall game. Most of the time, players will find that luck of the draw and luck of the roll will have more bearing than clever strategies or using their cards as optimally as possible.

The rules are very unintuitive. There were several times during a first playthrough where we realized we missed a step, or played a mechanic entirely incorrectly, due to things not being entirely intuitive with how it feels like the game should work. In particular, there are a number of cards that imply they should be playable at any time, but in reality are only able to be played at the start of the turn. 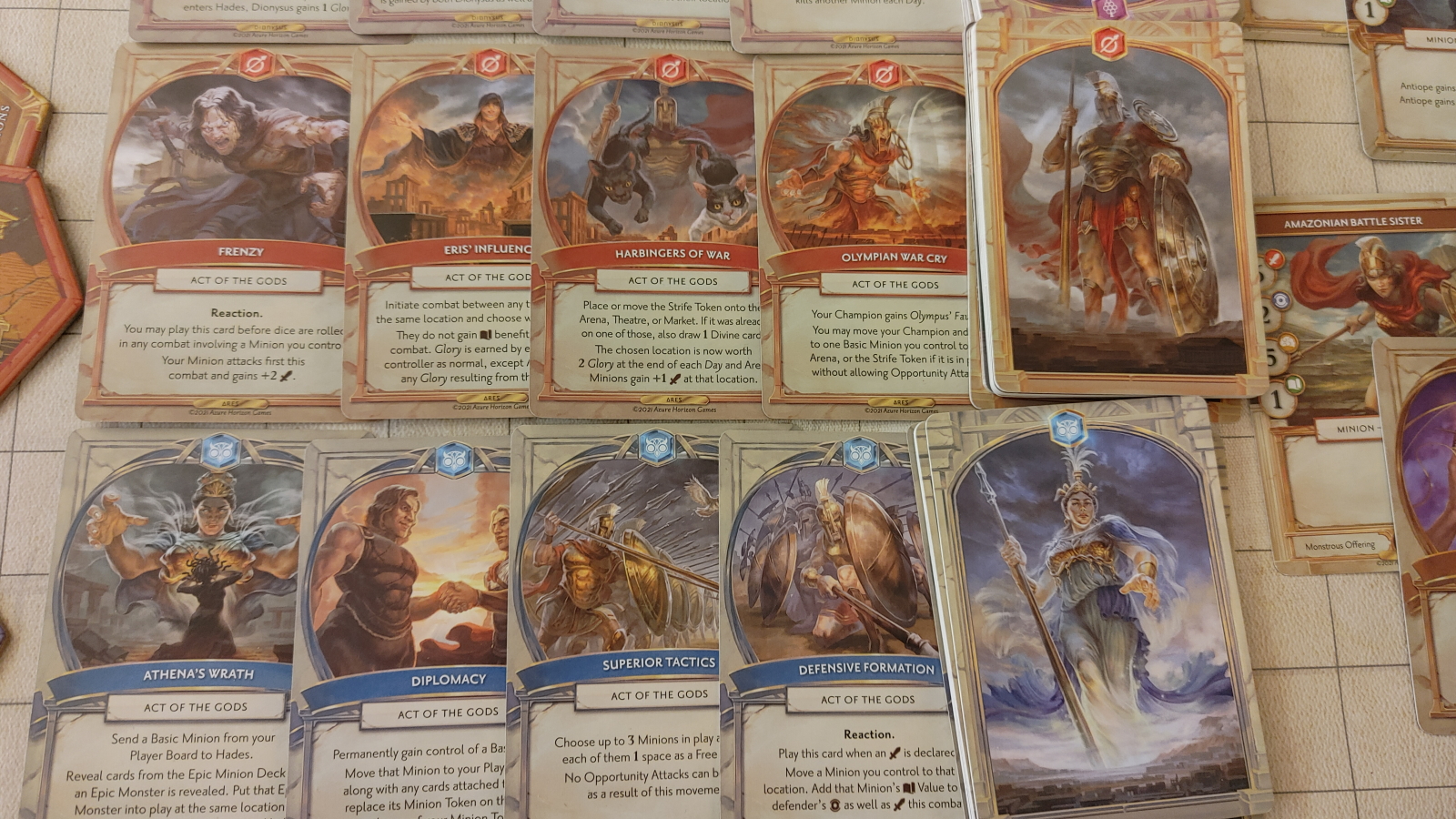 What’s more, the dice feel very poorly balanced. The fact that half the sides of the dice do nothing at all, and 1 of the other three do nothing in 90% of situations leads to situations where a player might grab a literal handful of dice after getting all of his guys together in a perfect attack, only to fail to get the 3 or 4 successes needed. Or worse, do all of that only to have the enemy’s meager 6 dice still roll the successes needed to retaliate against all odds. If these swings were the exceptions, not the rule, then combat could be exciting. It just happened so frequently that it felt like being strategic was less important than being lucky.

As for the components? Mostly good quality. The map is clear, and while individual hexes can become crowded, the board is largely readable. The biggest problem comes from the minion markers, which are clear enough to know something is there, but the numbers are small enough that players at my table found themselves constantly picking up the tokens to see which was which, or worse, moving the wrong numbered token around the board. The cards have great art, but cleanup is a bit of a chore, as each of the decks of cards will inevitably get mixed up since there is a single shared discard pile.

I really enjoyed the theme, art and components of the game, but the rules were riddled with exceptions and unintuitive choices. Worse, the strategy of the game just didn't work, with even elegant moves falling flat on their face due to the poorly balanced dice rolls.