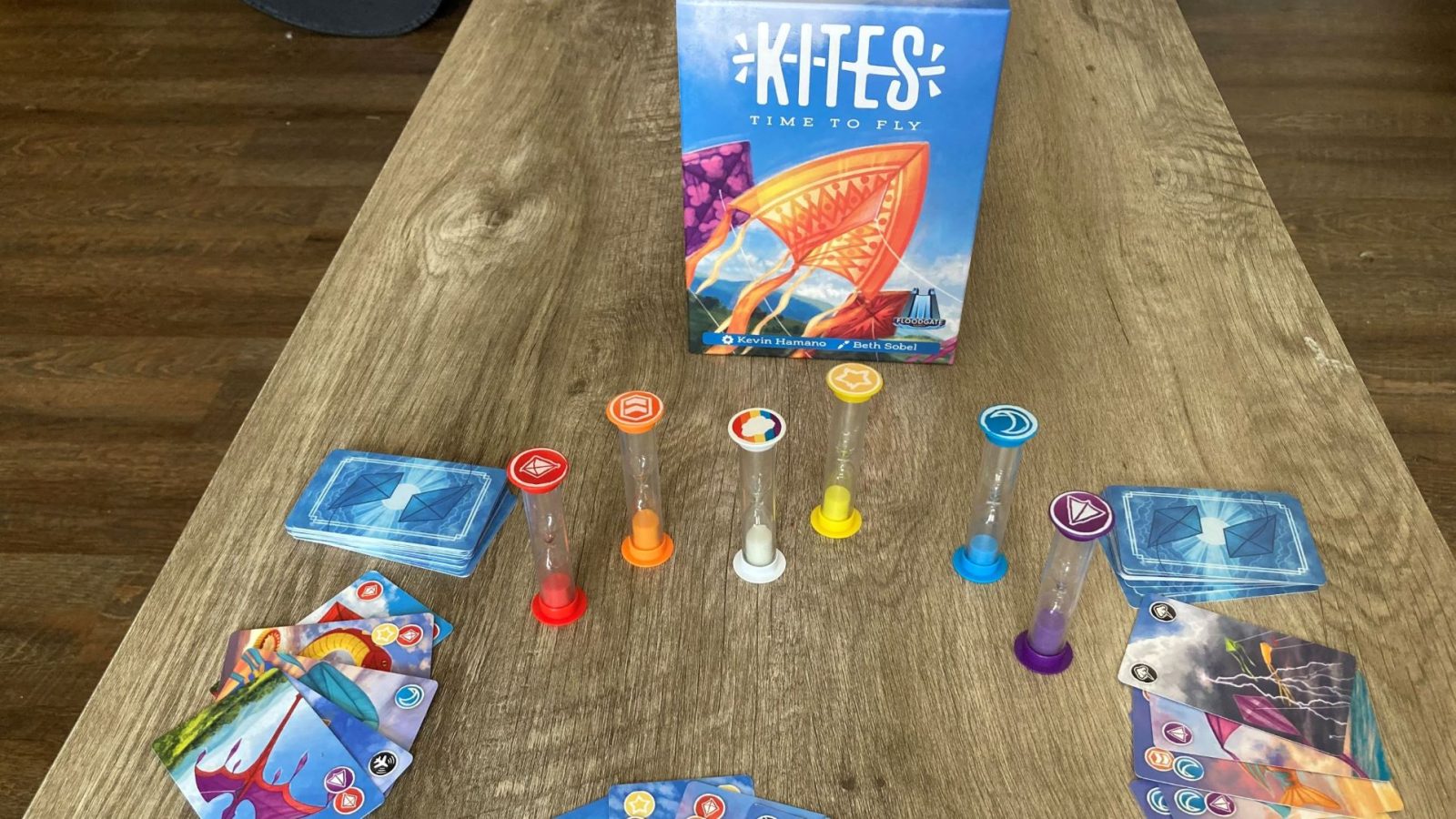 Trying to fly a kite can be a frustrating feeling. Sometimes it soars upon the perfect breeze, but often ends up more like Charlie Brown’s efforts, hopelessly tangled in a tree. The game Kites can frequently end up in a tangled mess as you and your fellow players race against the sand timers, but you’ll likely be laughing in between shouts rather than bemoaning the mess. 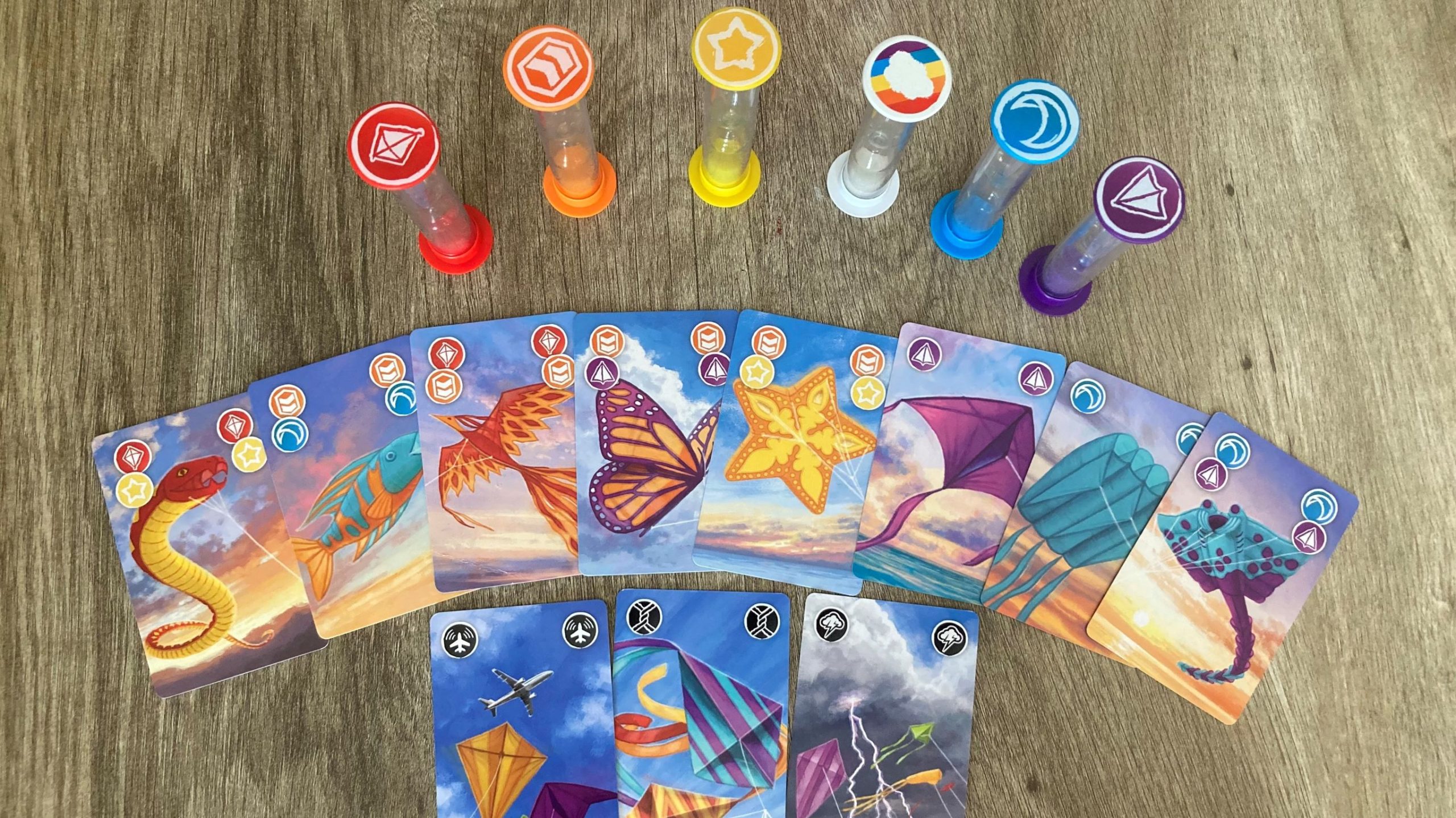 However, while that may sound simple, Kites is not easy. Managing up to six sand timers, all with varying lengths of time is tricky. Then if you really want to amp up the difficulty, the game includes 12 challenge cards split across three types that will make you wish you only had to deal with Charlie Brown’s kite-eating tree.

The Storm card causes whoever played it to flip all the sand timers. The Crossed Lines card forces you to swap a card with both the player on your left and on your right. If you get stuck with the Airplane card, no one can talk until you play your next card. What makes the challenge cards even more interesting is that when you pick up the Storm card from the pile, you announce that you have it and will be playing it the next turn.

The other two challenge cards are not announced, but you still have to play them on your next turn. The Airplane card can be the most devastating card because so much of playing Kites is based on communication with your fellow players. Playing the right card versus the wrong card can make all the difference when it comes to a timer running out.

The other twist involves the white timer. It is the only timer that does not have a specific card matching it. On the top of the white timer, you will see all the other colors running across it. This is because you can choose to flip the white timer by playing any card that only has one color symbol on it.

However, once the draw pile(s) run out, the white timer cannot be flipped except if the Storm card comes out. The last card drawn triggers the endgame. How much time is left on the white timer is how much you and your fellow players have to play every single last card.

If the challenge cards sound too difficult, the rulebook also has a “Warm-up Mode” notation. This removes the orange and purple sand timers as well as any card with either of those colors on them. It removes approximately half the cards, making it easier to get through. 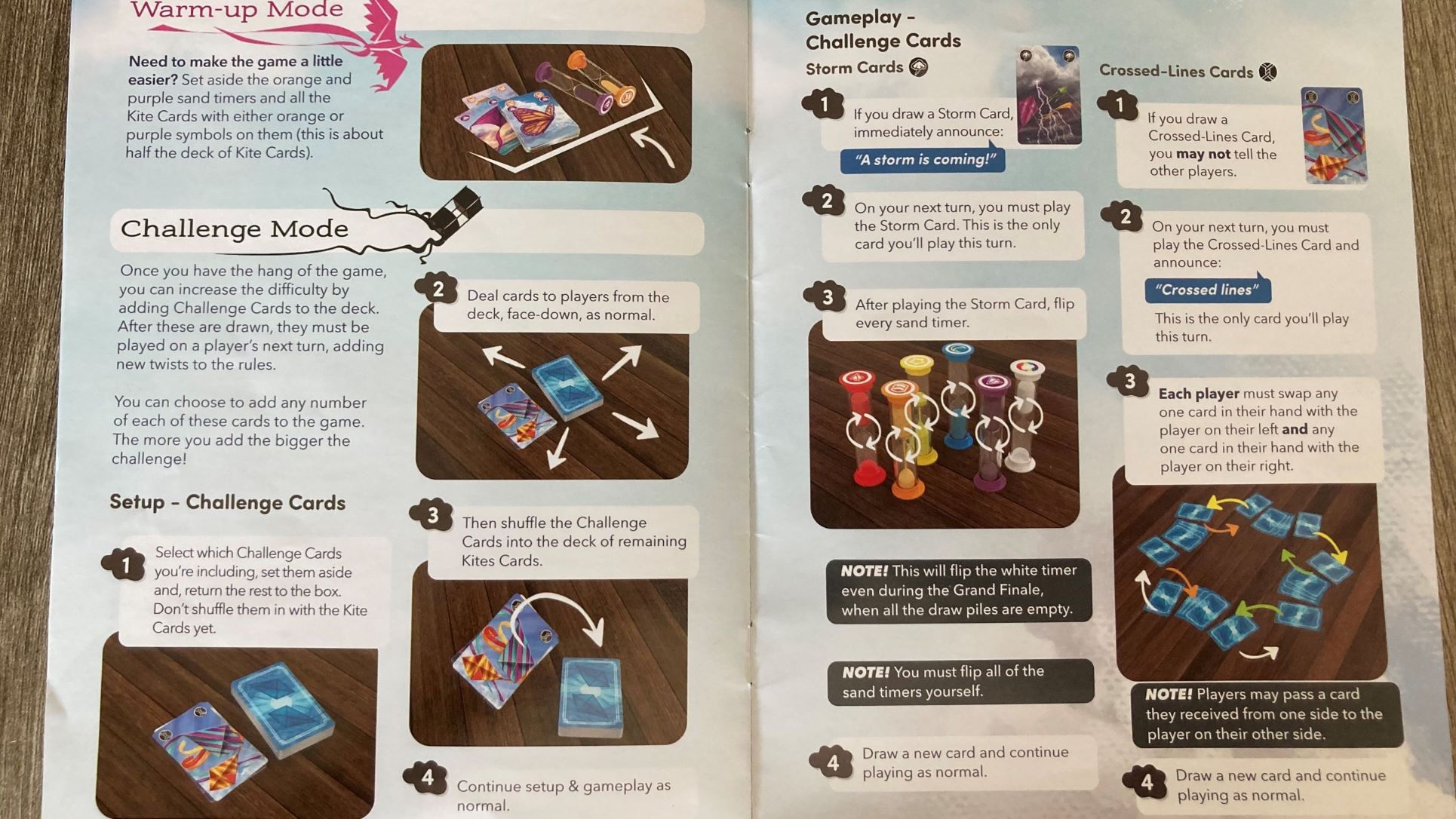 Kites instructions for the Warm-up and Challenge variations

This mode was perfect for introducing my nine-year-old to Kites. Managing four timers is easier than trying to manage six of them while still getting to experience the tension of trying to beat the falling sand.

Kites is a very different experience from two players up to five or six. Playing with two players feels more methodical during the first phase of the game, allowing for a higher degree of control. However, once the last card is picked up from the draw pile, the end game can be a bit chaotic as both players are trying to play all five cards in their respective hands.

At five or six players, each player only has three cards in their hand. It can feel pretty chaotic and each player might feel a little helpless as they shout about which timer is running out but are unable to play at that exact moment. However, the endgame feels much quicker as players simply throw whatever card they’ve got in a race against that white timer ticking away.

Kites is a brightly-colored game that’s simple to teach and easy to pick up. It’s a quick game, but I found that even at the higher player count, we kept coming back to it in an attempt to get better. The scaling difficulty options really make the game replayable. It would be easy to get discouraged if the highest difficulty level was the only way to play the game while the game would be too simple and lose replayability if it was only the ‘Warm-up Mode.”

Beth Sobel’s artwork on the cards is beautiful, ranging from the simple single-color cards to the multi-color cards depicting intricately-designed kites. The sand timers are not only colored but have their own distinctive symbol on both the cards and the ends of the timers. This can definitely help distinguish between what each sand timer is for people who are unable to distinguish certain colors.

Kites is a fantastic game that works across all player counts with adaptable rules for experience and age. Kids and adults both will enjoy playing, and the desire to improve and chase that elusive win will keep players coming back for more.

Jeremy is a freelance writer covering multiple subjects from board games to sports to barbecue. He lives outside of Charlotte, North Carolina with his wife and their three kids. They love to play boards game together, ranging from Qwixx and Azul and Splendor to Lord of the Rings: Journeys in Middle Earth.
Related Articles: Kites, Tabletop
Share
Tweet
Share
Submit