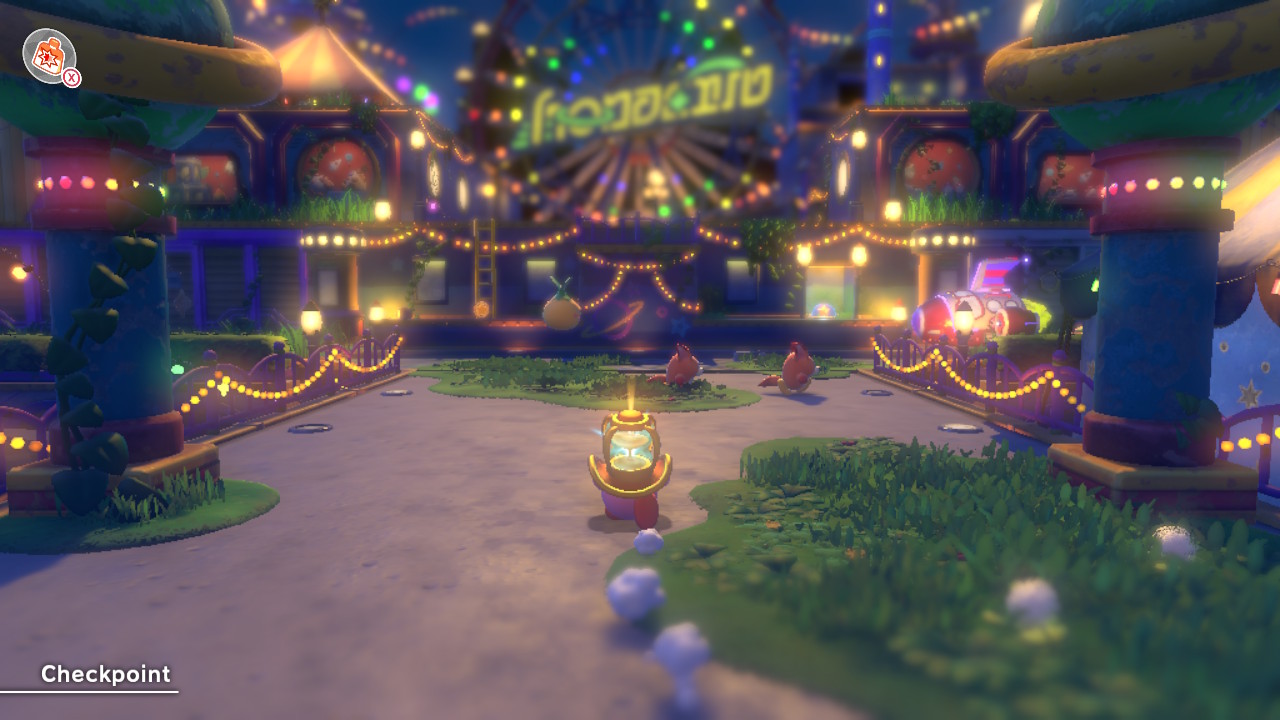 Everyone loves Kirby! I don’t think there’s a single person out there who actively hates the pink puffball, at least – even my mom likes him, and she hates video games. And given how often Kirby games are odd experiments, it’s strange then how there’s never really been a 3D Kirby game. There was Kirby’s Air Ride on the GameCube, but that was more of a racing game, and a short downloadable title on the 3DS eShop, but nothing that I would consider a full 3D platformer. Enter Kirby and the Forgotten Land, the latest entry in the mainline series and it just so happens to be entirely 3D. Most mascots made the transition to the third dimension over a decade ago, so let’s see how our friend that’s shaped like a friend shapes up.

Kirby and friends get sucked through a vortex that appears above Planet Popstar. The vortex grants Kirby a strange new power, while the Waddle-Dees just get kidnapped. Regardless, they all find themselves in what appears to be a post-apocalyptic world ruled over by the Beast Pack. To save his friends, Kirby must use his new Mouthful Mode to suck up things like cars and traffic cones along with his tried and true copy abilities. While the lore may be deep, the Kirby series has never been known for deep or complex stories on the surface. It’s mostly an excuse to take Kirby to new places and do new things.

Those new places are certainly interesting, but I can’t help but feel this outing plays it relatively safe compared to, say, Planet Robobot. Each level is littered with urban ruins for you to platform though, this is still a strictly linear affair but there are optional paths to discover and save more Waddle-Dees. It’s all a lot of fun and Kirby’s moveset translates perfectly to 3D, but more really could have been done with the theming. The game makes the ruins feel more like set dressing than anything meaningful to gameplay, you’ve still got your standard platformer biomes of grassland, desert, ice, and lava with one exception: the theme park. This world really integrates the idea of a post-apocalypse with Kirby’s abilities, you use Mouthful Mode to become a rollercoaster ride and copy abilities like Drill to dig up collectables. Granted you do things like this in other worlds and contexts, but this world stood out to me for its merging of gameplay and theming that the rest of the game, while still excellent, lacks.

That’s about the only problem I have with Kirby and the Forgotten Land. The whole game is a joy from start to finish, with new ideas and mechanics constantly being presented, explored, and reintroduced when the time is right. Kirby now has what’s quite possibly the smoothest transition into 3D given how he controls almost exactly the same but with a new axis introduced. Controls are simple, with B jumping and Y sucking or using Kirby’s current ability. You can still fly by tapping B repeatedly, but you can only ascend just a bit higher than your jump and you can no longer float indefinitely. At first I thought this might make the game less approachable than others, and it is by a small amount, but the two difficulties should make the game forgiving enough for very young players to still get through without much frustration. The first game my little brother ever beat on his own was Epic Yarn, so this is something I always keep in mind with Kirby games. Of course, while the game is approachable it’s still not very accessible given Nintendo’s staunch refusal to easily allow anyone other than able-bodied gamers to play their games. I harp on this a lot, but for good reason considering Sony is making great strides in accessibility with colorblind modes, the ability to change font sizes, turn off motion controls (something Nintendo really needs to learn), rebind the controls, or even slow down the game speed. It really is a shame that the family friendly company doesn’t do more to include those often forgotten by most developers. 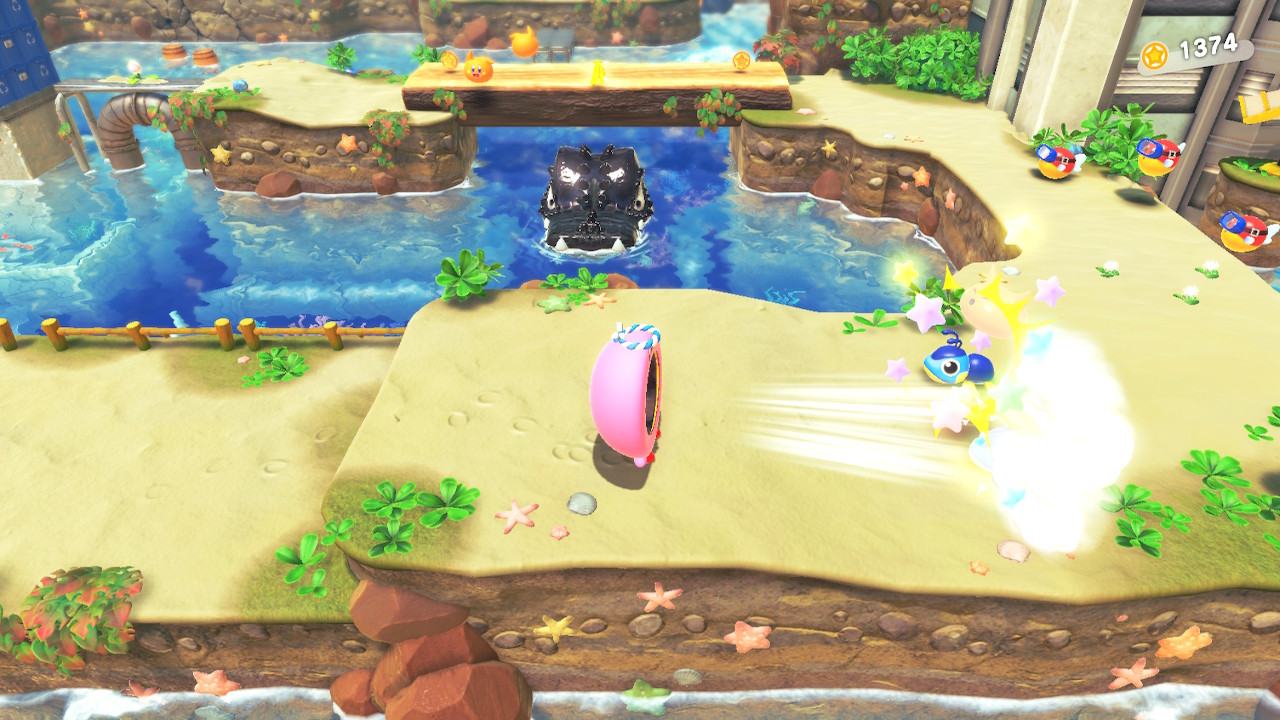 For veteran players, the game still won’t pose any challenge whatsoever, even on Wild Mode, but that’s really not what anyone is here for. You’re here for the cuteness and some fun platforming and the Forgotten Land delivers. Each level has a set of missions and secrets to find which reward you with a rescued Waddle-Dee. While all of these, save for reaching the goal, are secret when you first enter, it’s pretty easy to discover what they are simply by exploring and interacting with the level. If you do miss one, however, it is revealed once you clear the stage (though only one, so more stubborn secrets may take one or two runs to figure out what they are). These can be anything from making a number of flowers bloom, using a certain copy ability, defeating a boss without getting hit, or just taking a nap by a pool. They’re a lot of fun to discover and encourage experimentation with play.

After saving numerous Waddle-Dees, you’ll want to return to Waddle-Dee Town where the cute little guys have made their home. More stuff opens up the more you save and the more collectables you… collect so there’s always something new to see like a shop opening up, Kirby’s house being built, or a fishing pond along with other minigames becoming available. You’ll be visiting the weapon shop most often, however, where you can upgrade your copy abilities with blueprints you found, a number of Star Coins, and some rare stones we’ll get to in a bit. While the game doesn’t have a ton of abilities, each gets at least two more versions (excluding Crash and Sleep, which only get one upgrade) which are a lot of fun to discover and play around with. Much like the theming, however, I feel like there’s some missed opportunity here with each upgrade simply being better than the previous version. I like the system a lot as it is, but it would have been even better to discover your own playstyle by mixing and matching versions each with their own pros and cons. It’s not exactly a knock against the game, as I said it’s highly enjoyable, but if this system returns it could have a lot of potential. 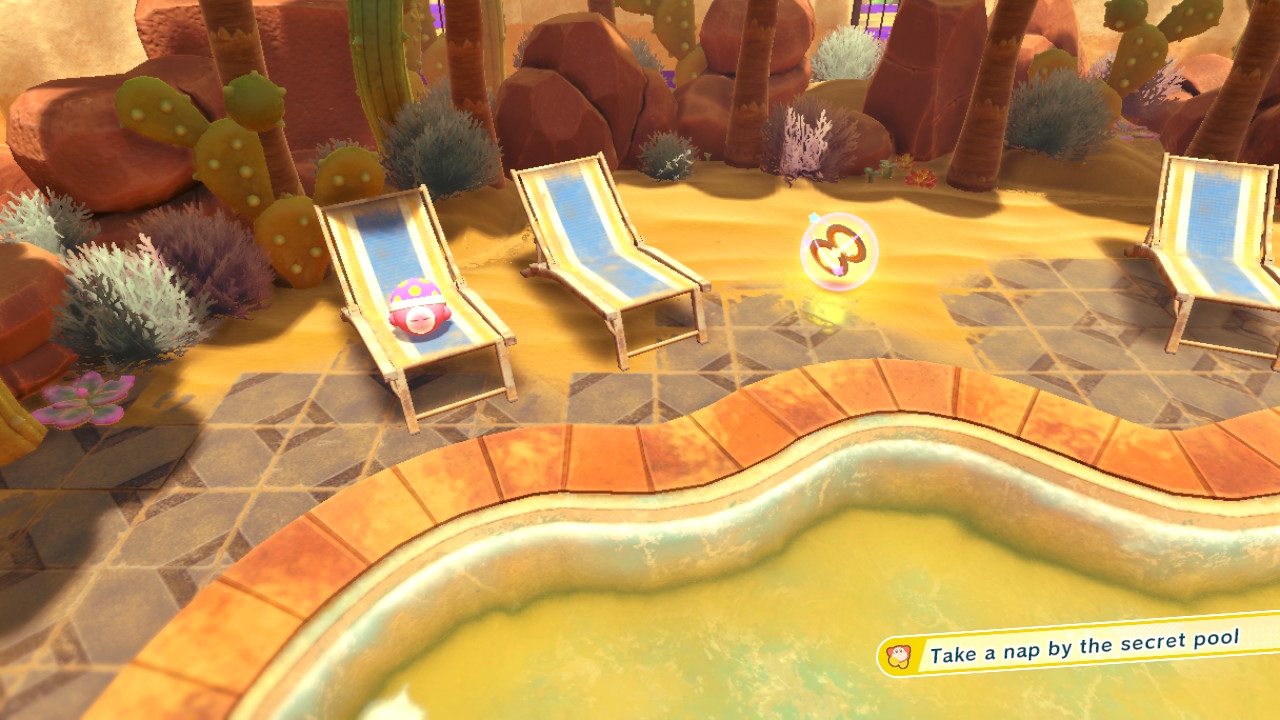 The main campaign is pretty meaty, so thankfully this isn’t a Star Allies situation where the game is finished later with free updates, but there’s still a bunch of side things to do and discover. After each level, one or two Treasure Roads will open up on the world map. These are small time trials focusing on a Mouthful Mode or copy ability and rewarding you with a rare stone. They’re fun little challenges that often teach you more about the ability you’re using, like having to use Cutter’s hold and return boomerang to hit switches. Just reaching the end will get you the reward, but they all have very challenging times you’re encouraged to clear them within if you really want to master the game. I don’t believe they reward you, but they’re there for their own sake which is nice to see.

I haven’t talked much about Mouthful Mode, but that’s because it already feels like a natural extension of Kirby’s abilities. You can suck in certain objects and take on their shape and ability to progress through the stage, serving mostly as pace breakers or bite sized challenges like racing by eating a car or using a circular sign to create gusts of air to propel a boat. They’re simple, but I like them a lot and Kirby just looks too cute when using them. One stupidly adorable thing I noticed was that Kirby won’t make any noises in Mouthful Mode like he usually does when saving a Waddle-Dee… because it’s rude to speak with your mouth full. Just like most Kirby games, Forgotten Land is an absolute delight I really can’t recommend enough. It’s simple, cute, and fun – I wouldn’t have it any other way.

Kirby and the Forgotten Land

Kirby and the Forgotten Land is an excellent first foray into 3D for the pink puffball. There’s so much to see and do on this adorable adventure it’s hard to focus on just one thing for long, and it’ll keep fans new and old entertained for some time.

David is the kind of person to wear his heart on his sleeve. He can find positives in anything, like this is a person who loved Star Fox Zero to death. You’ll see him playing all kinds of games: AAAs, Indies, game jam games, games of all genres, and writing about them! Here. On this website. When not writing or playing games, you can find David making music, games, or enjoying a good book. David’s favorite games include NieR: Automata, Mother 3, and Gravity Rush.
Related Articles: Kirby and the Forgotten Land
Share
Tweet
Share
Submit