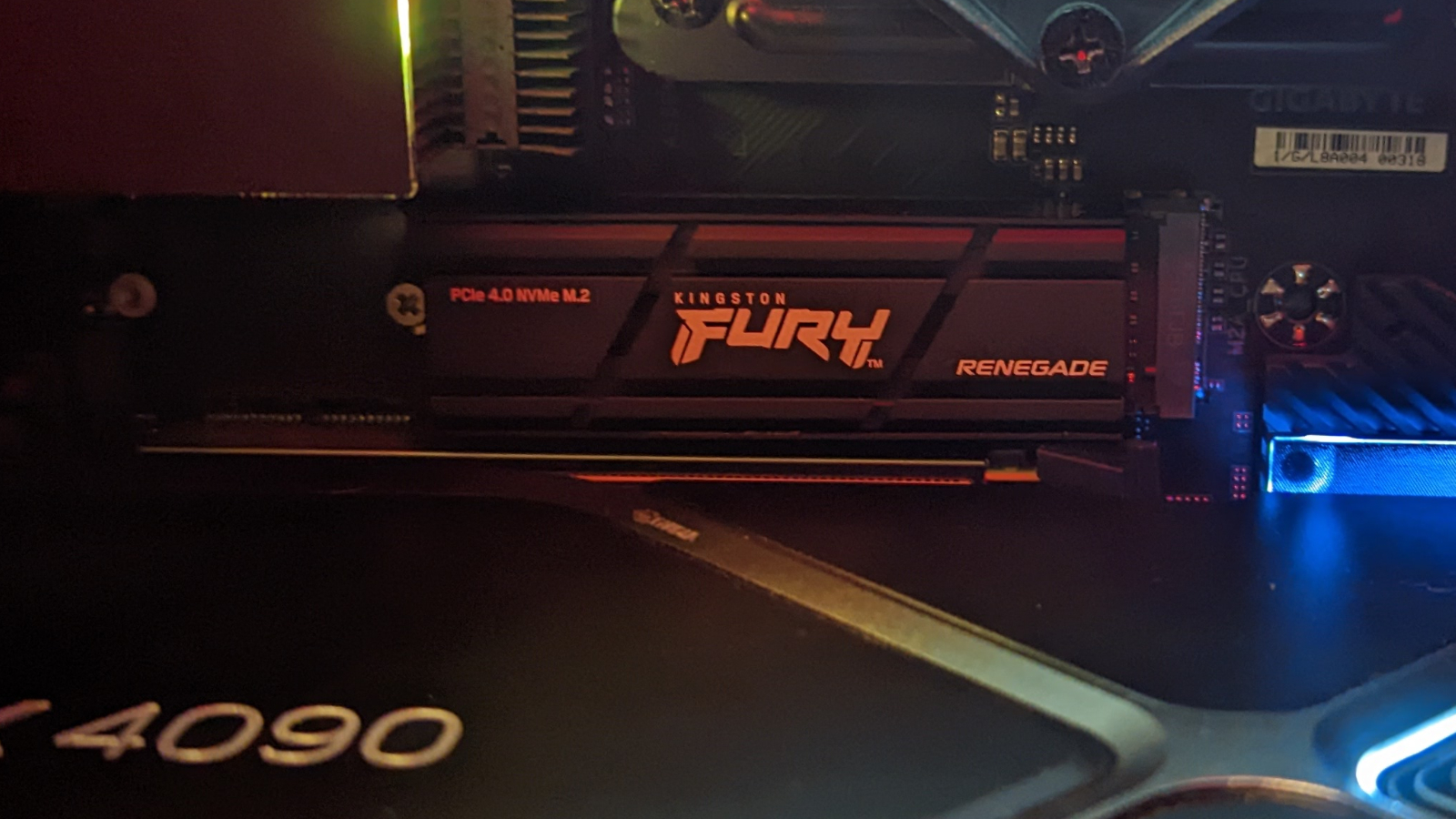 Kingston has always been among the top rated manufacturers in the storage space, and lately they’ve also been topping the speed charts. We’ve taken a look at their DDR5 memory offerings and came away impressed, so we had high expectations for their Kingston FURY Renegade NVMe storage line as well. Last year’s KC3000 model was able to hit 7000MB/s read and 6000MB/s write, but this new Renegade model is offering symmetric 7GB/s. That put this newest offering from the chip giant in some rarified air, so let’s put it through its paces and see if it can deliver.

The biggest beneficiary of PCIe 5.0 is storage. Benefitting from a pipeline with a combined throughput of 128GB/s to divide between the PCIe slots, storage, and other PCIe devices, NVMe drives can now reach even greater speeds than the prior generation, in many cases double or better. As I’m testing on an Intel 12900K on a MSI MPG Z690 CARBON, a PCIe 5.0 motherboard, there are 16 lanes to divide up.

As you’ll see in the graphic below, the 20 CPU PCIe lanes are divided up between graphics, memory, your secondary lanes, monitors, USB ports, Ethernet, and more. With PCIe 5.0, 16 of these are increased to this new PCIe 5.0 data rate of 64GB/s, meaning you can use fewer lanes to achieve the same thing as the previous generation. If you have installed several PCIe drives, as well as a powerful video card, and found that you weren’t getting full speed, it’s likely you’d tapped out your lanes. With 5.0, we should see that a lot less, at least until hardware catches up once again.

This may surprise you, but the freshly-launched GeForce RTX 4090 is actually a PCI-Express 4.0×16 interface, even if it is using the new PCIe Gen 5 power architecture. This PCIe Gen4 interface provides up to 32GB/s of bandwidth in each direction, leaving a lot of bandwidth on the table for devices like the Renegade. It’s also a great point to issue a warning – benchmark your gear when you install it. Why? You never know when you might have just installed a bottleneck.

If you use multiple NVMe drives in your system, you can find yourself suddenly seeing half speed on your reads and writes. When this happens, it’s almost invariably due to which slot you’ve placed the drive, and how many PCIe lanes you have available to use. As such, you want your NVMe to be located as close to the top slot adjacent to the processor as possible. In many motherboards this slot has a direct pipeline to the processor, making it the fastest on the board. In this case, you might see reads and writes around 3500MB/s instead of the max speed of 7000. Now that we understand what pipeline speeds are available for this drive, let’s slot it and bench it!

We are big fans of using a variety of testing tools to determine overall performance for drives. As such, we lean on CrystalDiskMark, ATTO, PassMark, and 3DMark. We also run all of these utilities multiple times, and empty, half full, and nearly full to ensure we are getting consistent behavior.

A quick check of HWInfo gives us the lowdown on the Renegade. 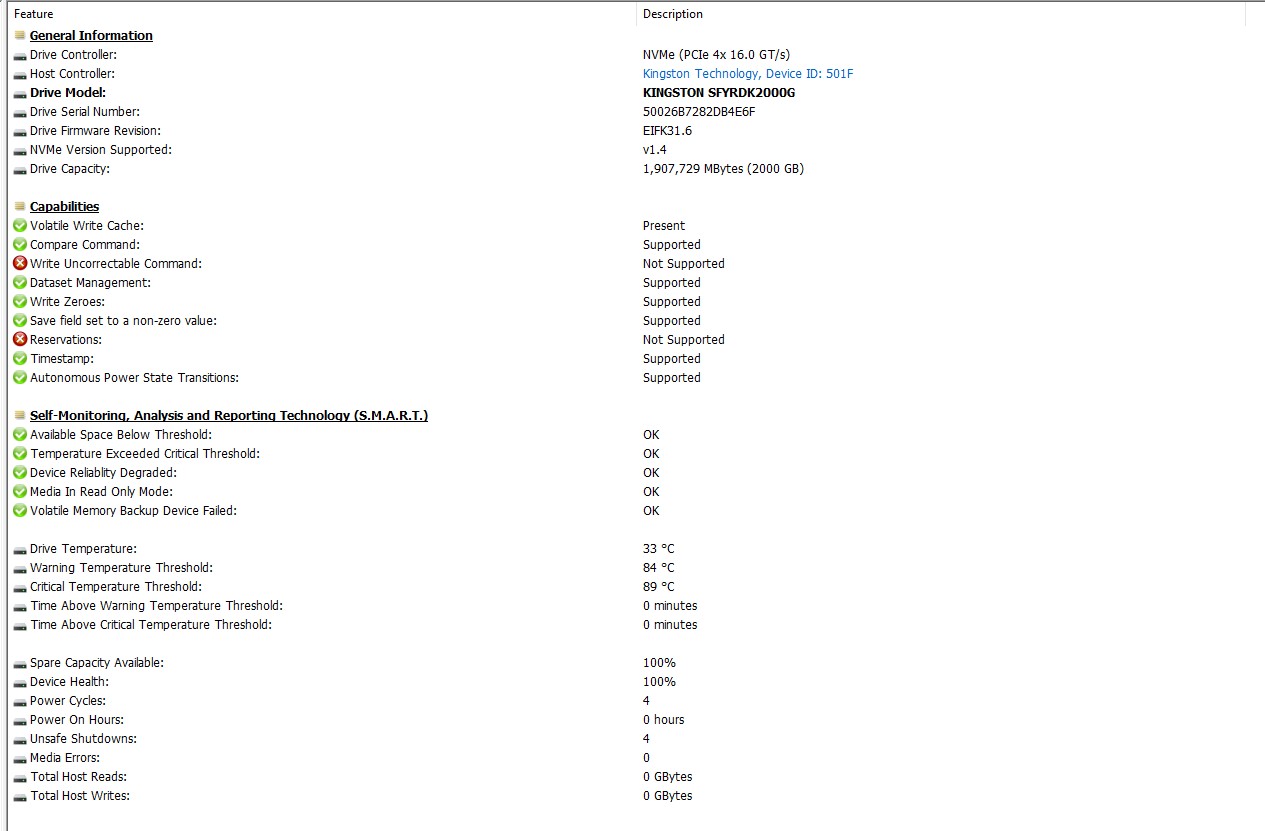 There are a lot of theories that NVMe drives benchmark differently based on the amount of data stored, with the empty and full states being the most divergent. Well, I’m happy to report that NVMe drives have improved dramatically over the past few years. The slowdown was a consequence of overprovisioning – a practice that reputable manufacturers have either stopped or drastically reduced at this point. To test this out I checked empty, at 25%, 50%, and nearly full. Rather than essentially pasting the same thing four times, suffice it to say that they are all within a 1% margin of error. As usual, I ran each test three times – it’s a non-issue here. 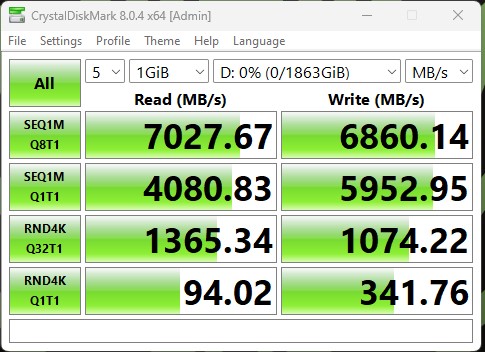 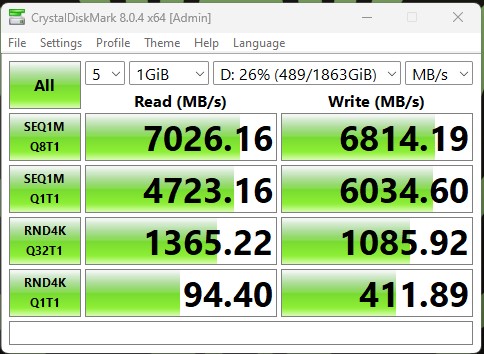 The next thing you’ll notice is that the drive is living up to its promise of symmetric 7000MB/s. A substantial improvement over the KC3000, and a high mark for NVMes. While we are on the verge of seeing PCIe 5.0 drives, these 7000MB/s levels are the cream of the crop. Let’s check our speeds across file size spectrum: 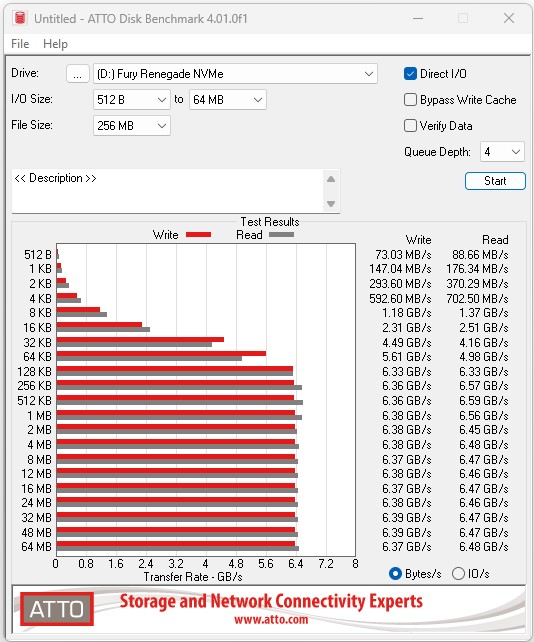 It’s fantastic to see that even at remarkably small file sizes we see full line speed, maxing out the drive in both directions. Many drives are great at the top end, but it isn’t until they hit the larger file sizes, but that’s not the case here. This is one of those “get what you pay for“ moments.

I like to use 3DMark as a comparison benchmark as it gives me a benchmark against a wider array of hardware. We ran a similar test against the Venom8 from Fantom Drives and it scored a 2805. This drive is pulling in a 3257 – something well above the average, according to this test. 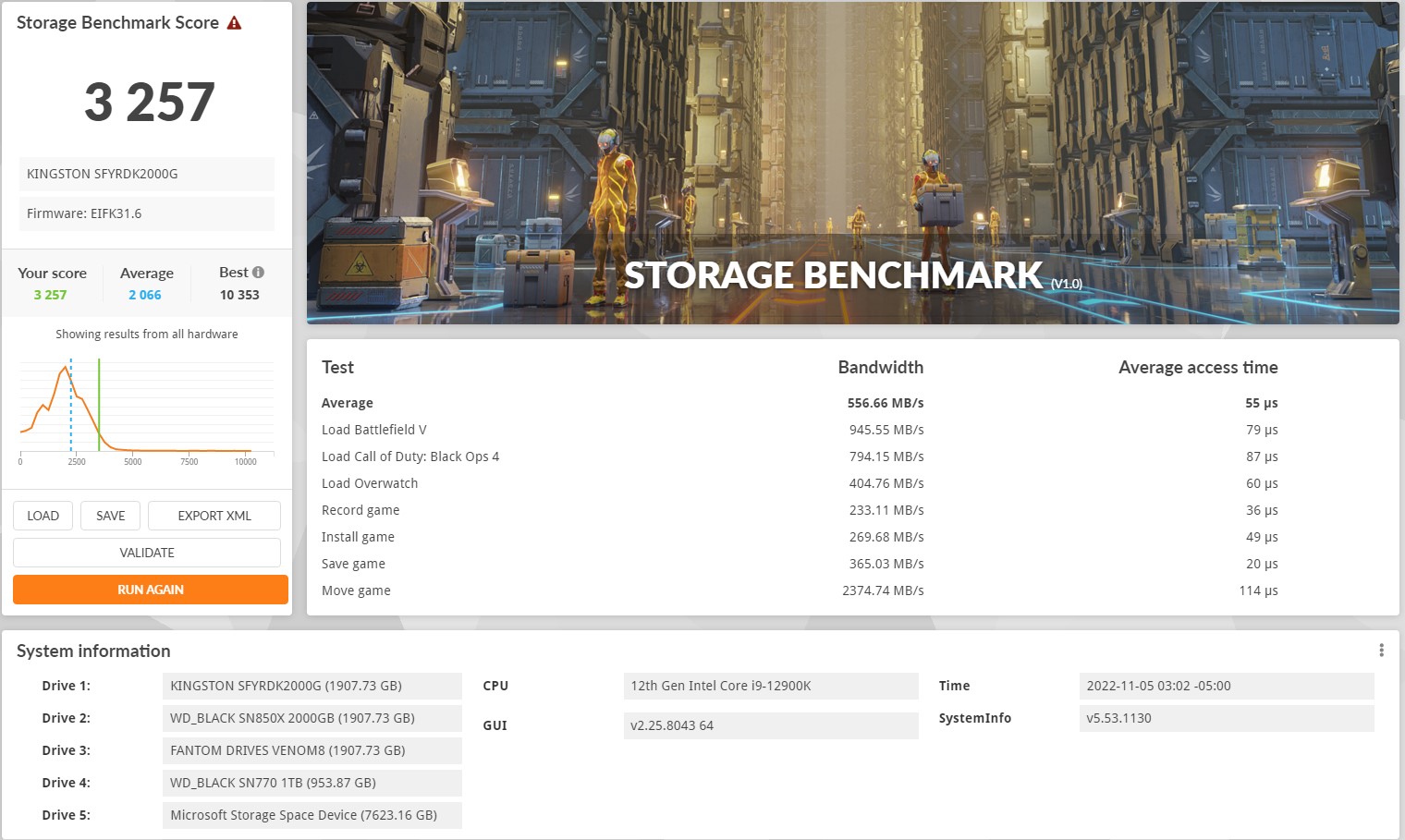 Much of the speed and consistency for the FURY Renegade comes from the Phison PS5018-E18 controller, matched up with Kingston’s 3D TLC NAND flash memory. That combination means you are getting excellent performance, as well as top-shelf reliability. Still, when failures do happen, it’s best to have a good warranty. I’m happy to report that the Kingston FURY Renegade carries a five year warranty, providing peace of mind for your brand new high-speed build.

To keep things cool, the Kingston FURY Renegade comes with a pre-installed graphene aluminum head spreader. It’s a single solid block sporting an all-black finish with low-profile fins. This means it’ll neatly fit in a PlayStation 5 (which it has more than enough speed for), a motherboard without head dissipation cover (I put mine in the top slot as it’s a.) closest to the CPU for maximum throughput and b.) can be installed while retaining the use of my heat spreader for my other drives), or in a laptop.

As firmware upgrades can offer improved performance, it’s wise to install the included FURY Renegade software. This will allow you to check out basic information about the drive, including the firmware revision, serial number, estimated lifespan, and a handful of important health stats. It’s nice when manufacturers include useful software instead of pointless bloat – I’m looking at you, MSI Center and Dell…uh….everything.

The Kingston FURY Renegade is rated to run at 70°C (158F) though I saw the drive hovering somewhere around 26°C-29°C with pops up to around 35°C at max load – well within the operating temp with a great deal of headroom to spare. There are models that ship without the heat sink, but clearly this one is engineered for this device, and it shows.

The last outstanding question is, as always, price. The Renegade comes in at 500GB for $94, 1TB for $129, $244 for 2TB, and 4TB at $629, all with the included low-profile heat sink. The heat sink adds about $20 to the equation, but you’d likely be needing it anyway, so you might as well get one that’s purpose built for the occasion. That aside, there are cheaper drives from companies like Inland and Linkmore, but not by much – in most cases less than $10. In our experience, that $10 will cost you about 200MB/s on the write side, so that doesn’t seem like a good trade-off to me, and frankly, I’ve never heard of those other companies. I’d rather put my trust, and my data, into a company I know and have earned my business.

With staggeringly fast read, write, and access speeds, the Kingston FURY Renegade sits at the top of the NVMe drive food chain. Backed by a 5 year warranty, real-world application, and a reputation for quality, the Renegade is a very easy recommendation.

Ron Burke is the Editor in Chief for Gaming Trend. Currently living in Fort Worth, Texas, Ron is an old-school gamer who enjoys CRPGs, action/adventure, platformers, music games, and has recently gotten into tabletop gaming. Ron is also a fourth degree black belt, with a Master's rank in Matsumura Seito Shōrin-ryū, Moo Duk Kwan Tang Soo Do, Universal Tang Soo Do Alliance, and International Tang Soo Do Federation. He also holds ranks in several other styles in his search to be a well-rounded fighter. Ron has been married to Gaming Trend Editor, Laura Burke, for 21 years. They have three dogs - Pazuzu (Irish Terrier), Atë, and Calliope (both Australian Kelpie/Pit Bull mixes).
Related Articles: Hardware, Kingston FURY Renegade NVMe
Share
Tweet
Share
Submit