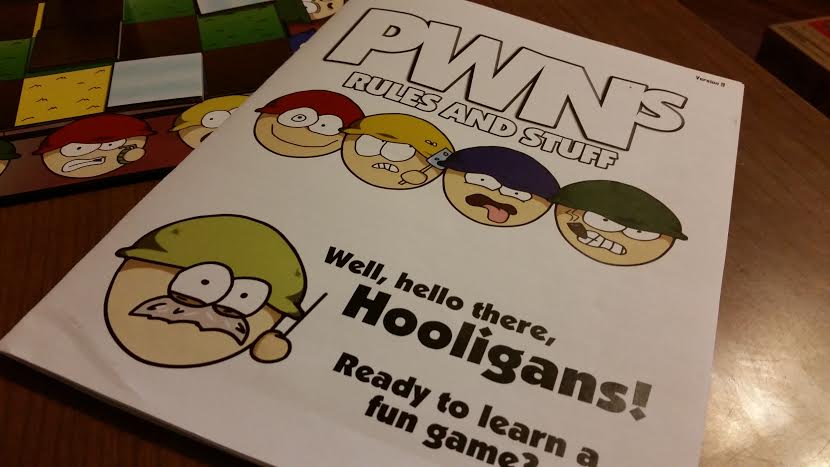 It’s been 20 years since I was first introduced to the computer game Worms. In the mid-90s, the game seemed innovative and a bit naughty. It was great fun to move these egotistical worms around blowing other worms to pieces with a deep arsenal of weaponry. I’d like to think that PWNs designer, Ryan Boyle, played the game too. There’s certainly a similarity as PWNs is all about moving your characters about the board to unleash mayhem on your opponent.

In actuality, Boyle compares the game to chess with the PWNs mimicking the pawns found in the classic game. The object is straightforward: move your PWNs about and attack your opponent with weapons. In an added twist, PWNs introduces terrain which plays a role in movement and certain attacks. Water hurts your PWNs as they have poor swimming abilities while dry grass is susceptible to flame attacks. Sure, Bobby Fisher isn’t giving chess up for this, but there’s enough of a concept here to support an entertaining, albeit casual, strategic experience. It’s simply a shame the game is neither entertaining nor strategic.

Players start their PWN teams on the home side of a chess-like board. Each team consists of an army of bodiless heads that look like extras from a South Park episode. While each team member has a unique name, none have a unique ability. The PWN name truly fits as every player has the same generic, straight line movement. For a game that’s being compared to chess, it would be nice if certain players had different movement capabilities. It would definitely add a layer of strategy that’s current absent from the movement phase.

After moving their PWNs, teams play cards to attack, change terrain, or regain health. Attacks tend to fall under two categories: hand-to-hand and projectile. Cards have cartoonish illustrations that show the listed attack, but the illustrations are really the only thing that distinguishes one attack from another. Half the combat cards in the deck deal one damage, with only subtle differences in movement effects. In fact, most of the attacks in the game feel the same after awhile. One might get some value from calling out their attack, but you’ll eventually realize that throwing a Molotov or a bag of shrapnel is essentially the same thing.

Bios are different, but there’s no difference in your PWNs abilities.

Terrain is a bit better represented as water makes for natural barriers and player created holes can knock out opponents. Still, the terrain element feels like a missed opportunity. You lose no movement value whether you’re moving through dirt, swimming through water, or traversing ice. There’s also some puzzling rules; water causes one health point to move through but ice melting into water causes two? Again, it would be nice to see some variation on the terrain effects to make movement more strategic.

Now there is a silver lining in your attacks as you can create some interesting combos. Since many attacks cause PWNs to move backward, an attack might force your opponents PWN to fall back into another. This is cool since collisions between two PWNs cost both a health point. It’s kind of rewarding to do a one health point attack only to see it chain react into a four point attack as the retreating enemy bumps into another who then falls back into water. This is a neat feature, but sadly it exposes the game’s greatest flaw.

Terrain adds some interesting decisions but a lot more could have been done with it.

Though players start out on opposite sides of the board, players tend to congregate in the middle as even most projectile attacks need to be within a certain range. From there, the best strategy for whoever has the most health points left is to simply ram into your opponent every single turn. In one of my playthroughs, I ended up with a couple of nice health cards which refreshed my legions to full health. With the lead, I simply rammed into my opponent. Since he was forced back, he never could get into a position to set up effective counters. There’s really no need to do anything else once the health situation has tipped in your favor and hurts what little strategy the game does contain. Now I realize the game I played is a prototype, and it’s understandable that a game may have some flaws that get hammered out before the final release, but if every game has the potential to digress into a smash fest, then the game itself has a significant design problem.

The game’s unpolished feel extends past the gameplay. The rulebook is an English teacher’s nightmare. Yes there are typos, but beyond that, the rule book’s tone has that “we aren’t taking ourselves seriously” attitude which gets stale as you muddle through it. Even some of the cards in the game are confusing. The Ice Age card, for example, tells you to pick a starter tile and then change all water tiles to ice. Why am I picking one tile then? Am I turning just starter tiles to ice? All tiles? Again, a few issues here and there may be overlooked before the final release, but a game gets bogged down quickly if opponents are constantly trying to decipher a card’s meaning.

Even with all the issues, there’s potential here for a decent game. Yet, the renaissance of board gaming has raised the bar on quality almost exponentially. There are thousands of titles slated for release this year. So while the basic premise of PWNs has potential, the flaws, especially in terms of gameplay, are bound to keep this from becoming one of the more memorable titles from 2016.

What could have been a fun, strategic game falls substantially short on both counts. The game's characters and weapons feel very bland, while the play can degenerate into a mindless pushing contest. The end result is a disappointing experience that could have been so much better.