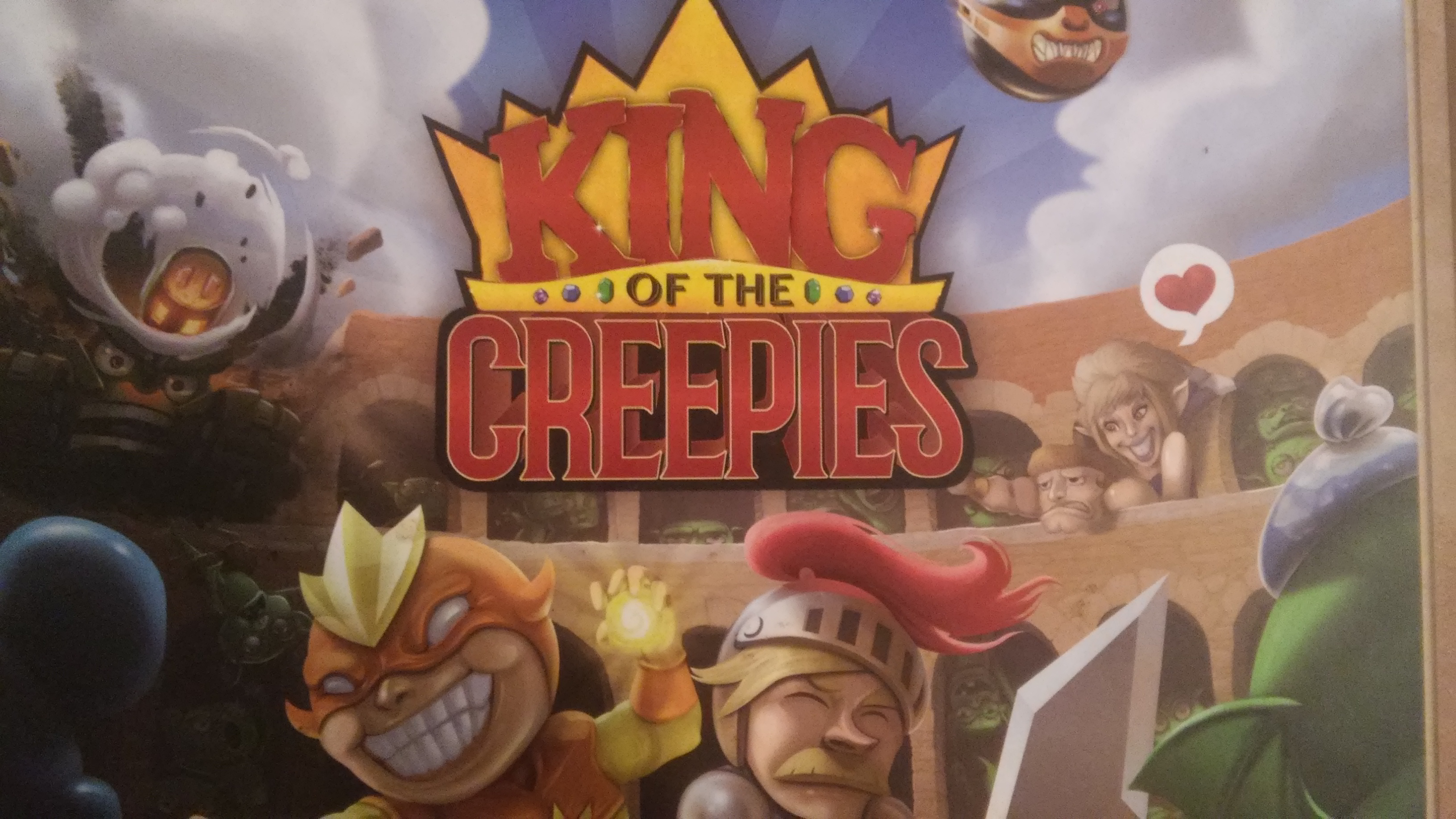 Lounging languidly on your swaying palanquin, you anticipate the battle ahead. There will be blood, and oil, and ectoplasm, but none of it will be yours. You are merely an owner, taking pleasure and profit from the carnage below. If you play your cards right and build the best team, you may yet watch its survivors triumph in the ring, making you the final and ultimate ruler of these unorthodox servitors: The King of the Creepies.

King of the Creepies is a game of combat, fortune, and betrayal, and not just in the coliseum. You and your fellow players, the owners of these teams of Creepies, will be doing anything it takes to get an edge on one another. Make no mistake, this game is aggressive, and at times cut-throat. That is not everyone’s preferred style of gaming, but King of the Creepies delivers in stride.

The basic focus of the game is combat between the teams. You will assemble your group of Creepies, strange creatures that hail from across space and time, equip them, wager on the outcome of the ensuing battle, and fight over several phases. You gain victory points by winning battles, secret goals that will affect your strategy, rare items, and massive expenditures of resources. Whoever earns 5 victory points first is crowned victorious.

Each player begins the game with a quick reference card and 3 Monies. They then randomly receive from each deck 2 Creepies, 2 Goodies, and 2 Abilities, and a Goal Card. Goodies are either helpful one time items or gear that you can equip to your Creepies to supplement their power. Abilities are special actions that you can grant to Creepies to supplement their options in combat.

It’s at this time that you first get a taste of the game’s humor, and likely when you find it the funniest. Looking through these cards, you are bombarded with references, wordplay, and clever artistic flourishes. The cartoony art style works well to keep the mood light, which helps with the wacky tone. Some of these jokes won’t hold up very well after the first time, as they are mostly references to other properties. These jokes (such as Floyd, the Pink Wall) are nice nods to other properties, ranging from The Room to It’s Always Sunny in Philadelphia and beyond, are fun but not jokes in and of themselves. Luckily, the wealth of cards make for fun across many games, unless you sit down and read each on your own.

Once everyone has their cards, you move on to the Market Phase. Each player gains one Money for each Creepy they own, and reset Exhausted (used) cards. They may then either draw 2 cards in any combination from the Creepy, Goody, or Ability deck or a single Goal card. After doing so, they may buy 1 card of any type for 2 Monies or discard two cards in hand for 1 Monie.

What follows is the Mischief phase, in which players may play a single Creepy face down and attach one piece of Gear to it. They may then wager up to 5 Monies on themselves on the outcome of the battle. Lost Monies go to the bank and won Monies come from it, so players are not truly betting against one another. This tactic is interesting, and adds fascinating ways to attempt to bluff your opponents. Finally you reveal a Mischief card, which may change the rules for the following battle. Many have no effect, but some change the outcome significantly, such as increasing the resulting victory crystals or instantly recharging exhausted cards.

Finally you enter the Battle phase, in which you reveal your Creepies and let them battle for dominance. Each Creepy has a unique ability, Hit Points, as well as a Speed, Attack, Defense, and Ability stat. The Ability stat determines how many Abilities you may play that battle, while the rest function largely as you would expect. To act in combat, you roll a die and add the Creepy’s relevant stat to the value.

The Creepy with the highest rolled speed acts first, and attacks another rolling two dice and adding their attack score. The defender rolls two dice and adds it to their Defense score, and the difference between attack and defense is subtracted from the Creepy’s HP. As you might suspect, attacks tend to do damage most of the time. However, they also tend not to kill an opposing Creepy unless that Creepy has already taken several hits. The game allows for some mistakes and requires you to think strategically about how you are using the various Gear and Abilities you have access to. These are limited resources and you will find yourself having to think deep before throwing any of them down.

That said, King of the Creepies is fast paced and a ton of fun. It doesn’t take itself too seriously, and while that does subtract from the pure strategy it also lets the game cut loose and run wild with the zany battles that take place. In that way it is analogous to Munchkin, if more tightly designed: things are unbalanced and wacky and all over the place, but that’s the point of the game. Given the various Goal cards available to you and the Abilities at your disposal, you might be surprised at how much you do have to think about as the game goes on, even if it sometimes devolves into a violent brawl.

If you take the game up to five or more players, this sense of an uncoordinated battle royale increases, some of the strategy flying out the window. People will be playing and counterplaying one another all over the place, and once they run out of resources it devolves into a massive bare- knuckle brawl for victory. The most meat of the game is found at three or four players, but you will not lose out for playing at any other level. However, the game allows for and encourages bribery, so with the right group a large game can take on a whole new dimension, rising to a negotiation game as you look on your gladiators, wheeling and dealing while their lives hang in the balance.

Mischief will keep you on your toes during every battle

King of the Creepies throws in one last morsel to extend the life of the game and make playing with more people viable: Goblin Poker. In this mode each player starts with 25 Monies, which they will use to bet with. Each round you will draw 3 Creepies, Goodies, and Abilities randomly and bet on your chances of victory. After the battle you discard ALL of them and redraw. What ensues is a chaotic, hilarious series of interactions as you cobble together a viable team from this selection and attempt to outwit your opponents to gather their Monies. Players can fold to leave the battle and redraw, but at the end each player still in has a single Creepy with a single piece of gear that they will use to battle it out. Goblin Poker is a small add on, but a creative way to get more use out of this game, especially if you are in the mood for something lighter. I commend its inclusion in the game and I see myself playing as much of this as the main game, and maybe more as time rolls on.

King of the Creepies

King of the Creepies is a raucous, hilarious battle that will keep you engaged through sheer joy at the chaotic events unfolding before you. Some players will be turned off by its aggression and randomness, but the unapologetic fun on display is very worth taking a stab at.

John Farrell is a legal aid attorney specializing in domestic violence, living in West Chester Pennsylvania. You can listen to him travel the weird west as Carrie A. Nation in the Joker's Wild podcast at: https://jokerswildpodcast.weebly.com/
Related Articles: King of the Creepies, Tabletop
Share
Tweet
Share
Submit