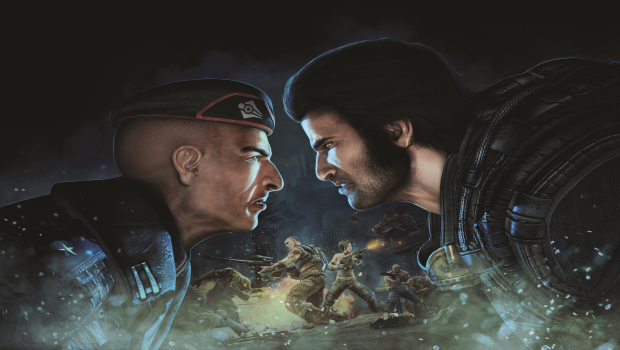 Way back in 2011, when Bulletstorm saw its first release, I thought of the game as nothing more than a way to get my hands on a demo for Gears of War 3. However, upon actually playing Bulletstorm, I found it to be one of my all-time favorite first-person shooters. When I heard that Bulletstorm was getting brought to current gen consoles, in the all-new Full Clip edition of the game, I knew I had to get my hands on it and see if it stills held up.

The shining star upon the tree that is Bulletstorm is the extremely unique and fun style of humor it has. The banter the characters have with each other and the odd, hilarious things they say when blowing up something or controlling a 50-foot robot make Bulletstorm one of the funniest games I have ever played. Sometimes the humor can get a little bit cheesy, but who doesn’t love some cheese with their destruction?

While the game is very funny and over the top, the game’s story is actually quite dark. You are a man who is troubled by his past and seeking redemption, but his use of violence keeps him from obtaining it. If that isn’t grim enough for you, the whole game takes place on a resort planet built on the backs of slaves who revolted and ended up either joining crazed tribes or mutating into grotesque monsters. These dark undertones really add depth to your character and make the game have a much greater impact than it would without them.

The first thing I noticed when starting the game up again was the extremely slow speed of the game’s aiming. I immediately had to turn up the controller sensitivity to just under the game maximum for the setting, but this only seemed to increase the aim speed when not looking down the sights. I found this very clunky and off-putting for about half an hour. At this point however, and for reasons that I can’t quite explain, the controls started to feel perfect. It was as if there was never anything wrong with the controls in the first place, and I just hadn’t synced up with the game correctly until that point. I had no problem getting headshots or finding my target and the whole experience became incredibly smooth. While the opening segment was a low point for the game, because I did find the speed to be a little jarring and uncomfortable at first, the end result was better for it, which makes up for the initial problems.

In Bulletstorm, there are about eight guns that you can use to cause mayhem and the brilliant butchery of your enemies. The game relies on the player getting skillshots, which are the different ways that a player can kill an enemy by using their guns, the environment, and some well-placed kicks. Using these points, players can unlock upgrades for guns and restock their munitions. This system feels truly innovative in the realm of first-person shooters, which is probably the reason why I consider this to be one of my all-time favorites of the genre. It adds such a fun and original challenge to the game, as I found myself trying to find interesting and original ways to kill my enemies, rather than the typical shoot-‘em-until-they’re-dead approach that I use in most other shooters. The way People Can Fly, the game’s developer, ties this system into the game’s story is also very enjoyable, as it is a way to resupply soldiers in the game world, with soldiers who underperform not receiving additional ammo and being left to their own devices.

When I think of weapons in video games, the first one I think about is the Screamer from Bulletstorm. I am very happy to say: after playing the Full Clip edition, that will not be changing. While all of the guns in Bulletstorm are very fun to use, ranging from a gun that shoots a chain of grenades to one that fires a rocket-powered drill, none of them give me quite the same satisfaction as what I get when using the Screamer to one shot an enemy’s head clean off. I think this goes to show the level of skill that went into creating each of the game’s different guns: if you can take a relatively basic revolver and make it just as fun for me to use as a rocket-powered drill, then you have done something special.

Saying Hi to the locals

With any good remaster, one element that should always be improved is the game’s visuals, and I can honestly say that I don’t think I ever really took notice of Bulletstorm’s appearance on the previous gen. I was usually too focused on the abundance of ways I could eliminate my enemies to notice things like the scenery, but with the new version of the game, things were totally different. When playing the game as it is now, there were multiple times when I would take time away from my slaying to just look at my surroundings and the characters, and I find the art style and palette to be quite beautiful and enjoyable to look at.

Bulletstorm: Full Clip edition let me revisit a game that I really enjoyed, and it didn't disappoint. It is still as unique and hilarious as ever, and with the improvements to its visuals, Bulletstorm now has some beauty to go with its blood.

Zach has been a gamer ever since he picked up a PS1 controller and played Asteroids for the first time. From FPS games to Point-and-click adventures, Zach knows no genre that he can't get into. When not playing games, he spends his time looking at the newest computer components on the market and dreaming of a day when he can buy them.
Related Articles: Bulletstorm: Full Clip Edition
Share
Tweet
Share
Submit