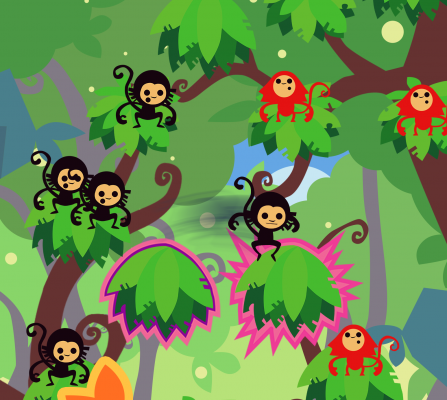 Rhythm is a concept that hasn’t been utilized often this generation. Likely because the industry was saturated with countless plastic instruments and motion-detecting dance games, developers have laid off the beat a bit.

Jungle Rumble seeks to turn that beat around and create a new and interesting handheld rhythm experience, and for the most part, it succeeds in doing just that.

A hybrid of rhythm and puzzle games, Jungle Rumble puts you in control of the Mofongo tribe of monkeys, whose peaceful existence is interrupted when the neighboring monkeys begin attacking your Sage and trying to steal your bananas. A little childish, yes, but the cute visuals and cartoon aesthetic of the game keep the game upbeat.

It’s important to keep the beat, or you’ll leave some monkeys in a dangerous spot.

The game plays out in 4/4 time, with each bar of music representing a “turn.” You input commands to the beat to move your monkeys, team them up and throw coconuts at the enemy monkeys. Moving requires tapping once on the monkey, then once on the space you want it to move to, then on the monkey again and the desired space again, all in time with the beat. If you nail it, you move; if you don’t your monkey gets confused and you lose a “turn,” while the enemy gets a leg up on you.

Teaming up monkeys lets you take out groups of enemies in one bombardment of coconuts.

It’s a tense situation when you’re trying to keep the beat and plan out your next moves. Enemy monkeys can knock yours off the treetops by moving into their spaces, and your monkeys can only defend themselves with coconuts, which you have to pick up and then command your monkeys to throw. It creates a steady back and forth, managing the movement of your troops and their position on the board, while also looking for ways to gain a leg up, and to not lose the beat while doing all that.

It’s in that conflict that I found one of my biggest issues with Jungle Rumble. As a touchpad-only, rhythm-based game with short levels that you can easily pick-up-and-play through, Jungle Rumble should be a great game for Vita owners on the go. However, the beat is often very difficult to keep track of, especially if the music track in the background has the 4/4 of your turns on upbeats instead of downbeats. That may fly over the head of non-musicians, but in layman’s terms, it’s often difficult to discern when you should be tapping unless you’re honed in on the game’s music.

The game ramps up in difficulty quick as new enemies, like these bigger apes, are introduced.

That’s great, as it adds a level of concentration to the game and some challenge to managing your turns and beats, but it also means that playing the game with any audible distractions is immensely frustrating. I too often found myself sitting down to enjoy Jungle Rumble while I had Netflix or a TV show on, and then immediately muting the TV, not to better enjoy the game, but rather to curb my frustration with being unable to discern the game’s music and beats. I’d highly recommend this game be played with headphones.

The music of Jungle Rumble is fantastic, though, which helps when you’re getting frustrated with the increasing pace of the game. Many new enemy types and challenges get thrown at you over the course of the game’s several areas, so the variety in music helps alleviate the stress when you’re going for gold on an especially hard level.

The treetops are colorful and vibrant, and fit the soundtrack very well.

The visuals are clear and well-done, and spaced out just enough so that I never felt my tapping was getting in the way of comprehending what was going on on-screen. The style of the Mofongo monkeys was especially endearing, with the little guys tossing little coconuts and grunting little monkey grunts along with the actions. The only technical hang-ups with the game were occasional hitches when loading into a level or cutscene, but they were few and far between, and didn’t affect the gameplay at all.

While the game was entertaining for the short time I spent with it, this is a smaller title. The price point matches the length, but don’t expect a crazy amount of hours dumped into this unless you plan on chasing a gold medal on every level.

Jungle Rumble sets out to create a fun, simple, engaging experience on the Vita, and does exactly that. It isn’t the most glamorous AAA game and it won’t absorb weeks of your time, but it does something few other games do, and its unique charm and addictive blend of rhythm and puzzle offset many of its drawbacks.

Keeping the beat in Jungle Rumble is a short but enjoyable experience. Those looking for a quick rhythm or puzzle fix on their Vita will find it here.