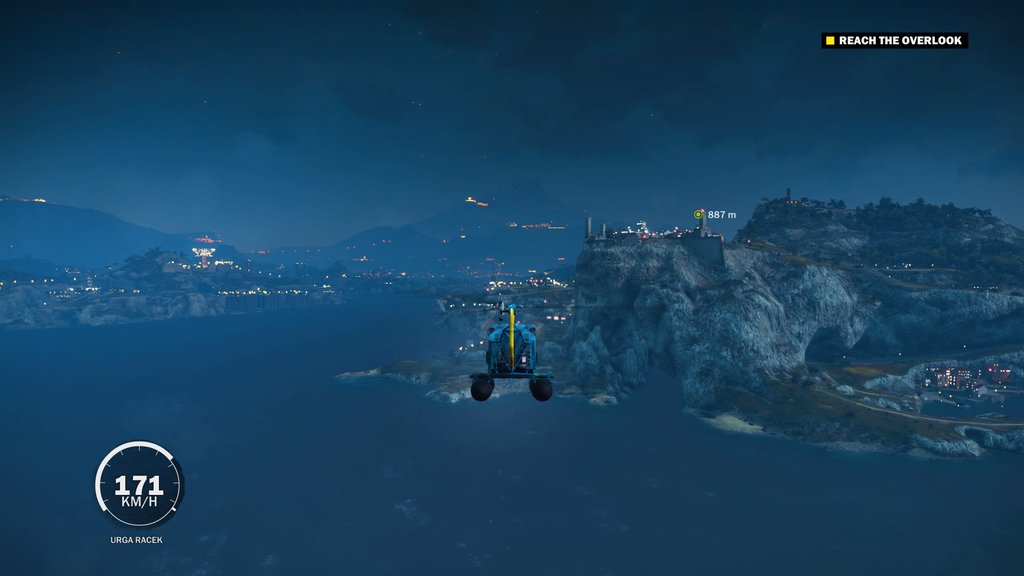 One series that has always known how to have fun is Just Cause. With the first game, developer Avalanche Studios seemed to have a clear vision, but its execution was severely lacking. It hit major success with Just Cause 2, a frantic out of control romp that hooked people from their first stunt position and now with its  newest release, Just Cause 3, Avalanche shows that its  vision  is coming into  focus.

As has been the case with the entire series, Rico Rodriguez reprises him role as the main protagonist of Just Cause 3. After dealing with Bolo Santosi, he returns to his homeland, the ficitonal nation of Medici, only to find it in disarray. A disruptive, tyrannical dictator named Sebastiano Di Ravello runs Medici and is harming the morale of the entire landmass. To stop that, Rico aligns with a rebellious faction that wants to retake the nation. He meets up with his lifelong friend Mario and the duo begin to think up a host of objectives to topple Di Ravello. The best way to lead this revolution? Plant a bunch of explosives and watch them go up in smoke.

With Just Cause 3, the writers have leaned directly into its b-movie comparisons. The story is a simple one, and is led by a host of zany, off the wall characters. Mario comedically  brings about numerous terrible ideasand spearheads one of the funnier missions in the game. Di Ravello is a compelling, but also by the books dictator. He hates everyone but himself, kills innocents, etc. For the most part, any type of cutscene in Just Cause 3 is forgettable. But I don’t think anyone is expecting a philosophical masterpiece from a game that begins with its main character hanging upside down from a helicopter.

While little may have been expected of the story, it would be nice if the game built its story missions around using the strengths of the game. Missions often call for you to use your parachute/wingsuit combination in a variety of ways , but as the game went on, I found myself tiring of being forced to perform certain objectives. It felt as if I could do them by myself, without the help of the story, so there was no real reason to interact with them. The story feels like an afterthought to some of the more exciting stuff than can be found within Just Cause 3’s world.

Possibly the largest thing you will spend your time doing in Just Cause 3 is liberating the many cities of Medici. These areas of interest will typically contain a list of things that must be destroyed or taken over, such as a generator, billboard, radio tower, or police station. Though numerous, watching them explode is never tiring. It’s clear Avalanche Studios wants Just Cause 3 to be the kind of game you can sit down and have mindless fun with and these cities are good examples of just that. There were numerous times where I would get in the rhythm of taking over Medici and completely lost track of time. It’s just a great way to have fun watching all sorts of things explode into flames.

When you are not freeing the people of Medici, you will be probably be taking part in some of the many challenges strewn throughout the open world. These challenges are very reminiscent  to other open-world games and consist of car races, wing suit challenges, and the popular “blow everything up around you” objectives. For the most part, these side challenges are just another way to kill some time and relax. They never become too difficult or complex, they simply exist as a way to focus the player on one of Just Cause 3’s mechanics. These missions can be easily overlooked if you want, but they do provide mods that can be helpful at times.

Just Cause 3’s new modification system adds some excitement to some areas of the game, while doing very little for others. As you earn more modifications for your grenades, you can have them explode on contact, or explode only when they connect with a certain object,be that an enemy, destructible object, etc.. The game also hides the ability to zoom in with weapons behind these modifications, but it is earned rather early on. While the mods available can provide some thrills, it does feel like there is some unexplored potential within the system.

With a game so focused on explosions, frame rate drops are to be expected on the console versions. That being said, some of the frame rate issues that arise while playing Just Cause 3 are simply unacceptable. If you plant multiple explosives and want to watch them all explode simultaneously, there is a good chance you will experience a severe frame rate drop. When it doesn’t happen, the destruction is glorious. On the same point, the game suffers from erratic load times that slow down its momentum. Though t has decreased drastically in the last few days,  there are still instances where it can take up to two minutes to load you back into a failed challenge. These faults combine to really put a damper on an incredibly enjoyable experience.

Gunplay in the Just Cause series has never been anything to brag about. That continues with Just Cause 3 as you never feel totally in  control when using a weapon. Thankfully, there is a pretty generous auto-aim that assists you in picking off enemies. As for the actual gun selection, your options are varied. You can obtain all sorts of assault rifles as well as side arms. You constantly roll with a special weapon, which can range from your standard RPG to a gun that calls in airstrikes on whatever location you point it to. The variation in weapon sets makes destroying the many statues satellite dishes immensely satisfying.

Just Cause 3 provides a ton of thrills. Its main goal from the outset seems to focus on raising the player's blood pressure and enthralling them with the action. While it achieves that feeling for a majority of the game, the console version suffers from some serious frame rate and loading issues that bog down their experiences. That being said, Just Cause 3 is a great game to simply sit down and have fun with. Turn your brain off, relax, and embrace the explosions happening on your television screen.