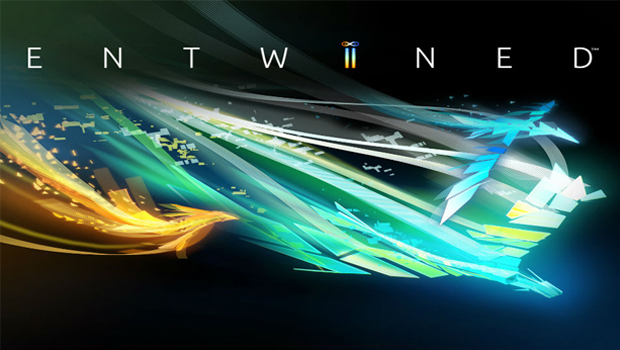 Entwined is the latest member in a growing family of games that are less about the objective and more about the emotional experience. In a move that was perhaps made to highlight the speed in which Indie developers are able to design and release games on their platforms, Sony first introduced Entwined at this year’s E3 on the same day it was made available for purchase. This incredible feat of speedy design and release would be all the more impressive if only the game had not felt so…rushed.

There’s no denying that Entwined is a beautiful game. The vibrant colors pop as you guide your way through the organic stages, each one seemingly designed to induce an almost hypnotic state, and the sound effects and music are serenely calm and peaceful. Everything about this game from the opening cinematic to the differences in level design suggests that this is more a work of art than just a simple game.

Entwined is best when played with headphones. The ethereal musical score is truly beautiful and it is one of the primary incentives for pacing through the different levels. Each stage has a different sound and tempo that helps emphasize the various nuances in the levels and it changes in intensity the closer you get to completion.

The gameplay is a unique and challenging experience. Using the two analog sticks, you control both characters on two sides of the screen at once. It’s a simple concept, but when the speed and variety is ramped up it can become very difficult and even frustrating at times. The challenge of controlling two units at once is akin to rubbing your stomach and patting your head at the same time. It’s one of those things that works best when you don’t overthink it. I had the most success when I consciously blurred my eyes to take in the whole screen at once rather than focusing on a single task.

The story, which is only loosely in place and certainly up for interpretation, follows an orange fish and a blue bird as they make their way through nine lifetimes in the hopes of one day joining together in love. It’s a grand premise and it has all the makings of an epic story, however it never really seems to be realized in the gameplay.

It plays out as nine distinct levels, called lifetimes, where you move the fish and the bird through a sequence of matching orange and blue colors. Successfully passing both the fish and the bird through their respective colors will result in the collection of glowing orbs that fill up two meters on the top of the screen. When both meters are filled the ability to merge the two animals will become active. The completion of each level is marked by a merging of the fish and the bird into a singular dragon that you are allowed to control across the screen without restriction. After a short sequence of skywriting with the dragon, the next lifetime begins and the process of guiding the bird and fish resumes.

And that’s my biggest problem with Entwined. Unlike the achingly epic sense of discovery in Journey and the emotionally charged artistry of Flower, Entwined simply does not deliver what it sets out to. For all of the bells and whistles of it being a story about two lost souls seeking love through multiple lifetimes, what you really get is a fish and a bird that move through tunnels until they turn into a dragon to make designs in the sky. It’s pretty but it just doesn’t communicate a grand love story.

As a whole, Entwined is a good looking game with a wonderful musical score and a fun style of gameplay, but for all of its grand suggestions that this is a game about love and life and destiny, it ends up feeling more like a dressed up minigame. It’s a nice enough experience and there are worse ways to spend an afternoon. But I would only recommend this to gamers who prefer going to an art exhibit over the arcade.

It’s a fun little game with some gorgeous visual and musical style, but it fails to evoke the emotional core that similar games like Journey and Flower were able to. The challenging gameplay and the musical score may be enough for some players, but those in search of more depth will need to look elsewhere.