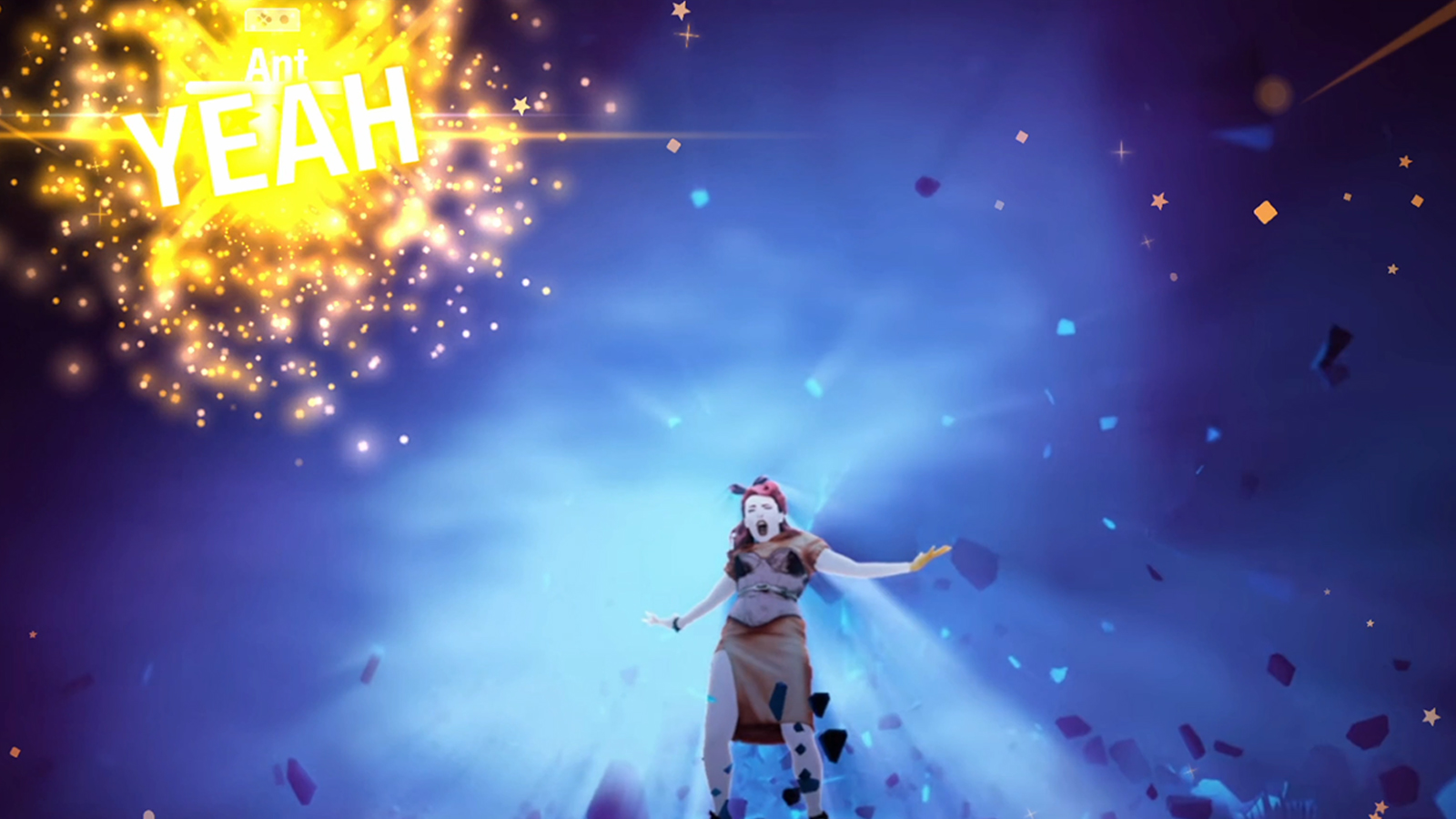 As soon as you boot up Just Dance 2022, it immediately feels like Ubisoft is phoning it in. It’s the exact same interface as Just Dance 2021, which is the same as 2020, which is the same as 2019. Ubisoft has gone from trying to compel you to buy Just Dance every year, to knowing it will sell as reliably as sports giants like Madden and FIFA, so the developers only have to nail the choreography and song choices while they try to entice you to join its subscription service. Surprisingly, Just Dance 2022 does brings choreography that’s the best it’s ever been and includes unexpected jams that make you want to jump up and dance. It’s unquestionably the best Just Dance in a long time.

Although I have spent many hours playing Just Dance with a variety of people, my wife helped me with this review as she is a dance critic and an avid player of the franchise. Because we’re both slowly drifting from our ability to quickly pick up on the latest hits, we were surprised by how much we wanted to dance to so many songs we never heard and that fall outside what we typically listen to (modern pop music isn’t our thing). Leading 2022’s lineup with the Brazilian electronica jam “Baianá” and following up with the near universally known hit “Believer” by Imagine Dragons immediately kept us in and warmed us up for the next 38 songs included in this year’s edition. We came for the dancing, but we stayed for the songs.

Choreography is at its peak in 2022, and the stylizations seen on the Switch benefit from no longer catering to the Wii or the Wii U. A lot of dance styles are represented from different areas of the world, but my wife and I were pleased to see more contemporary dance, which was enhanced by the backgrounds, clearly only abled to be powered by the stronger Switch tech. The last time we could remember any kind of lyrical dance style that was performed true to how people actually dance was “The Winner Takes It All” by Abby in 2020. But Ubisoft brought the 2014 hit “Chandelier” by Sia and it has one the most moving and genuine version of contemporary dance in any Just Dance. I have to shout out the K-pop dances as well. Those tend to involve much more technical moves and that is no different in 2022. But what’s choreographed in 2022 feels more authentic than ever. K/DA’s “POP/STARS” starts as an Extreme song (I can’t remember a Just Dance where you didn’t have to unlock an Extreme dance) since the moves are so involved. The other K-pop songs keep to that expectation, and it was a lot of fun challenging ourselves to nail moves you’d see real dancers perform. 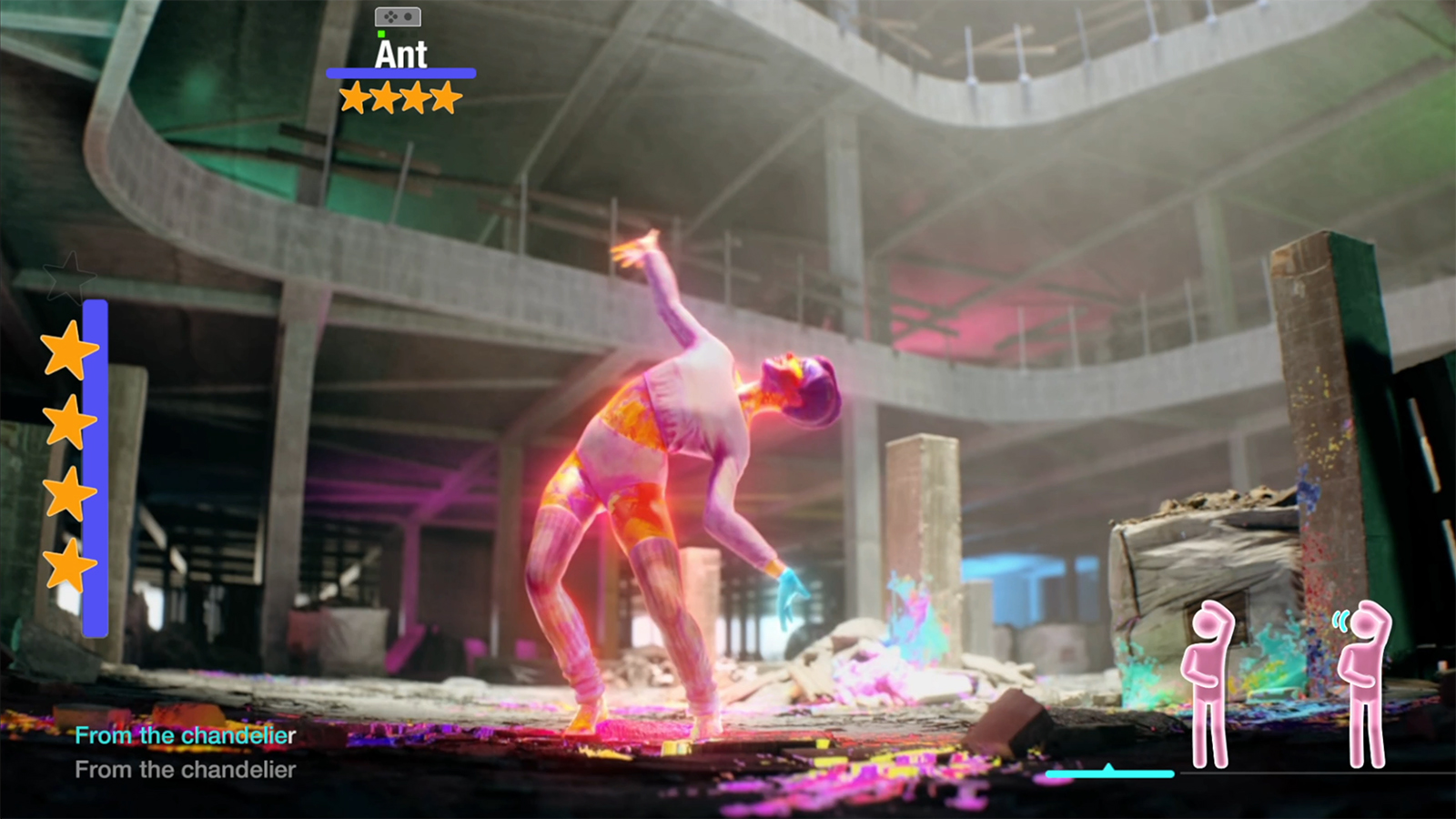 Since stage effects are no longer hindered by Nintendo’s legacy consoles, the result easily gives 2022 the best backgrounds of any Just Dance. “Chandelier” is complemented with gorgeous, realistic graphics; the same goes for Billie Eilish’s “Happier Than Ever,” full of exploding and crumbling stone. The sweeping camera angles and movements involved with Aespa’s “Black Mamba” and Justin Timberlake’s “Rock Your Body” make the dancing feel better but also more fun to watch, though the latter did have some jarring background transitions that didn’t feel quite right. Ubisoft is clearly experimenting with their newfound freedom, and it rarely ruins the dancing. “Sua Cara” by Major Lazer has one of my favorite stages as it contains a hand-drawn comic book effect and dramatically brings out the power of the primal Brazilian dance. Todrick Hall’s “Nails, Hair, Hips, Heels,” the song created just for this edition, features around 20 real dancers, all on screen nearly the entire time. All these improvements to what you see add to the engrossing nature that made Just Dance a hit in the first place.

Everything else about 2022 remains the same from 2021. Just Sweat is still the way to focus all the dancing into workout that calculates calories. I still don’t know if it’s accurate, but it’s still encouraging to see a number. Kids Mode returns, though a few songs are unchanged from 2021 and it still includes only a measly eight songs unless you have a subscription to Just Dance Unlimited. It’s such an underdeveloped mode for a franchise that attracts a lot of kids. It disgustingly feels like bait for the legitimately compelling service. World Dance Floor brings its tournament-style dance-offs back but doesn’t change its format to add any new twists, but it’s still a good time, particularly if your partner dances better since multiple players account for one score.

Just Dance Unlimited continues to be a great way to get all of your songs if you’re new to the franchise or have lost ways to play the old games, but it’s not an option at all for me since I have a way to play every Just Dance. I do like the idea of making playlists but it’s not enough for me or my wife to get hooked. What’s insulting is Ubisoft gives you one song for free. I couldn’t tell if the song changes during my review time. Out of 700-plus potential songs, the least they could do is have a few songs for free and on rotation. 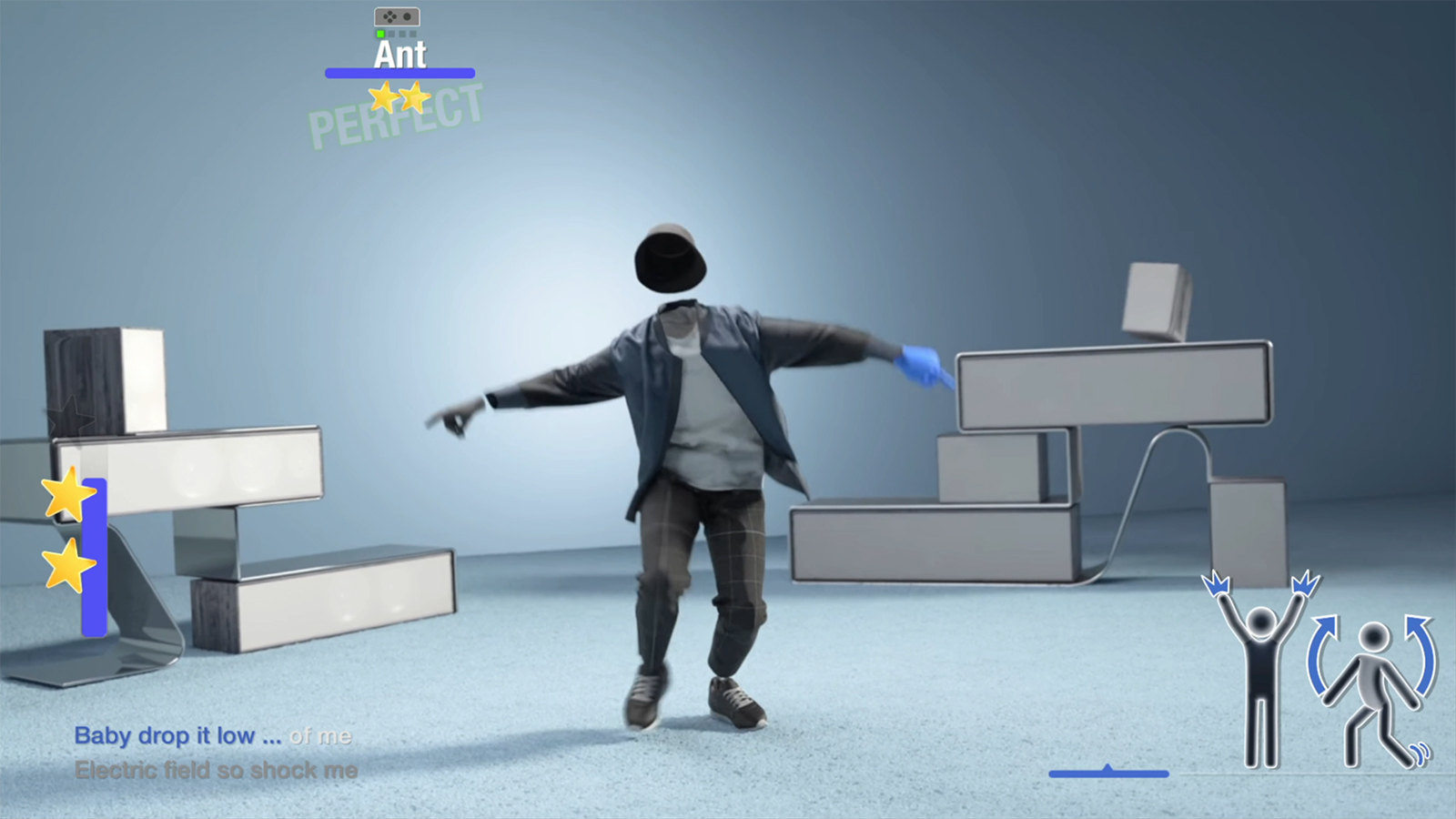 Richard Allen played the PlayStation 5 version and is a newcomer to the franchise. Here are his thoughts.

I’m not a dancer. Sure, I have some rhythm, mainly due to playing guitar throughout much of my life, but aside from bobbing back and forth in time, there’s little else I could do on a dance floor without embarrassing myself. This inability to dance has kept me from checking out the Just Dance series, despite being a fan of rhythm games and seeing ads for the series on a yearly basis. With the release of Just Dance 2022 I decided it was time to suck it up and hit the dance floor, albeit in co-op mode with my wife so she could make up for my lack of dancing skills.

Upon booting up Just Dance 2022 I was almost instantly overwhelmed by the sheer amount of content. This is not necessarily a negative but did take a moment to decipher as I hopped between screens attempting to figure out what was included with the base game, and what was included with the unlimited pass. Still, I was impressed with the sheer number of songs and modes present. Once I figured out the general layout, I began setting up the Just Dance controller app.

One of the reasons I had avoided the series for so long – aside from my embarrassing dance skills – was because I thought you had to have a console camera to play. Thankfully, that is no longer the case and seems to not have been for quite a while now. The controller app is rather intuitive and works incredibly well, allowing nearly anybody to hop into a game without any extra equipment needed. 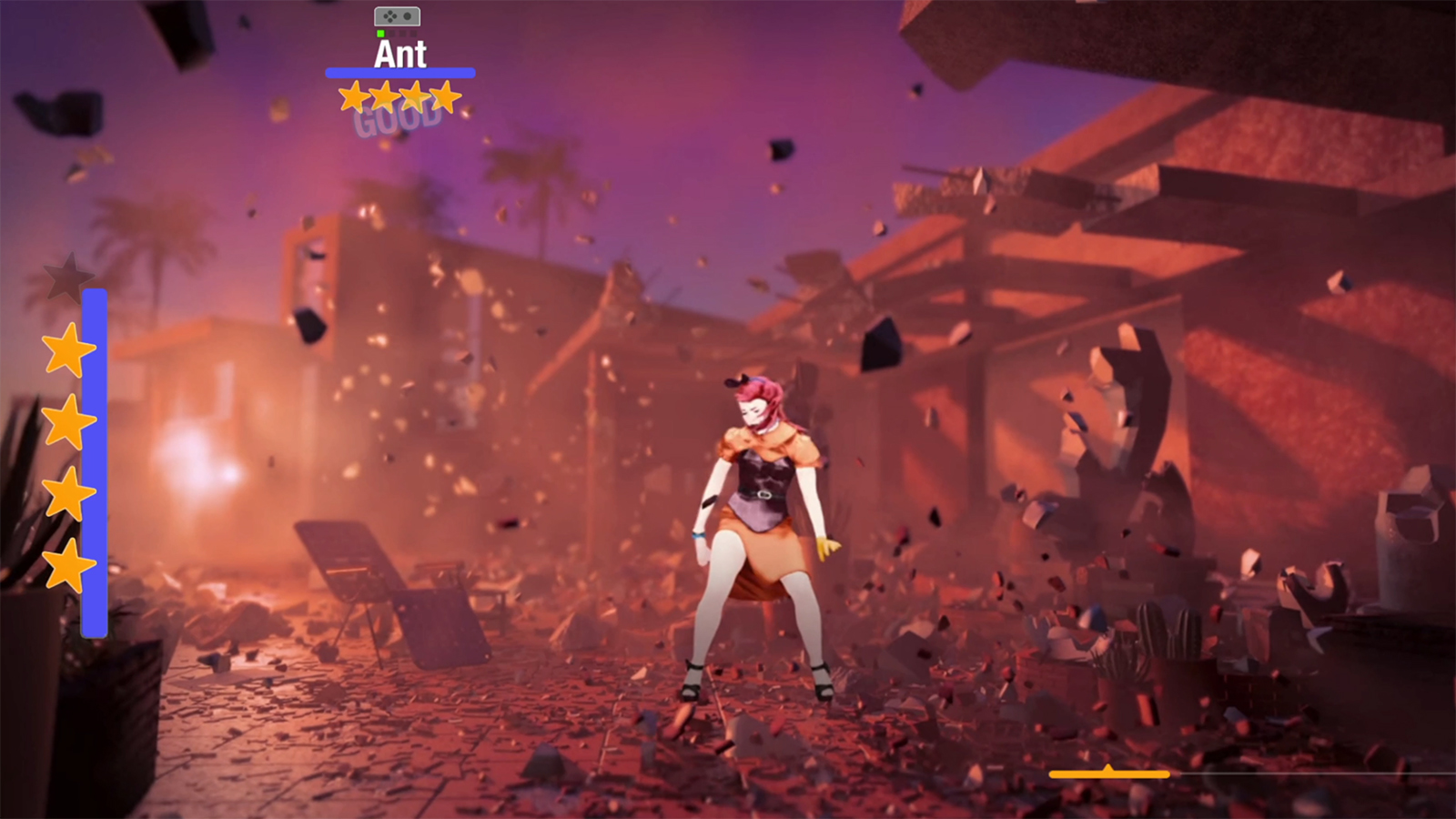 Having spent much of my life addicted to mastering little plastic guitars for the Guitar Hero and Rock Band series, I caught on to Just Dance quickly. The basics were the same: follow the on-screen prompts to gain points, unlock bonus points by completing gold moves in tandem with your dance partner, and basically try to score as many points as possible to unlock new cosmetic items. Finally experiencing these mechanics for myself, I felt Just Dance 2022 handled surprisingly well.

I instantly felt at home with what was expected of me, despite being out of my element. Better yet, the game is rather generous if you can mimic the hand movements, so I was able to flail about while my wife slayed the moves and still make a decent score. I was thankful for this, as I was afraid upon beginning that I’d fail miserably and not be able to enjoy myself – instead I had a great time with little skill needed. Sure, there’s room for improvement, but I never felt like I wasn’t good enough to enjoy myself. It also helps that the songs are brought to life by great looking music videos with dancers that are easy to follow.

Thankfully the songs are graded for difficulty, allowing players to begin with easier songs and work their way up, otherwise I may have gone for a few songs I was incapable of handling and became disgruntled early on. Additionally, for those who may enjoy a song but not be able to mimic the advanced moves, many of the more difficult songs have easier versions so nobody misses out on the fun. 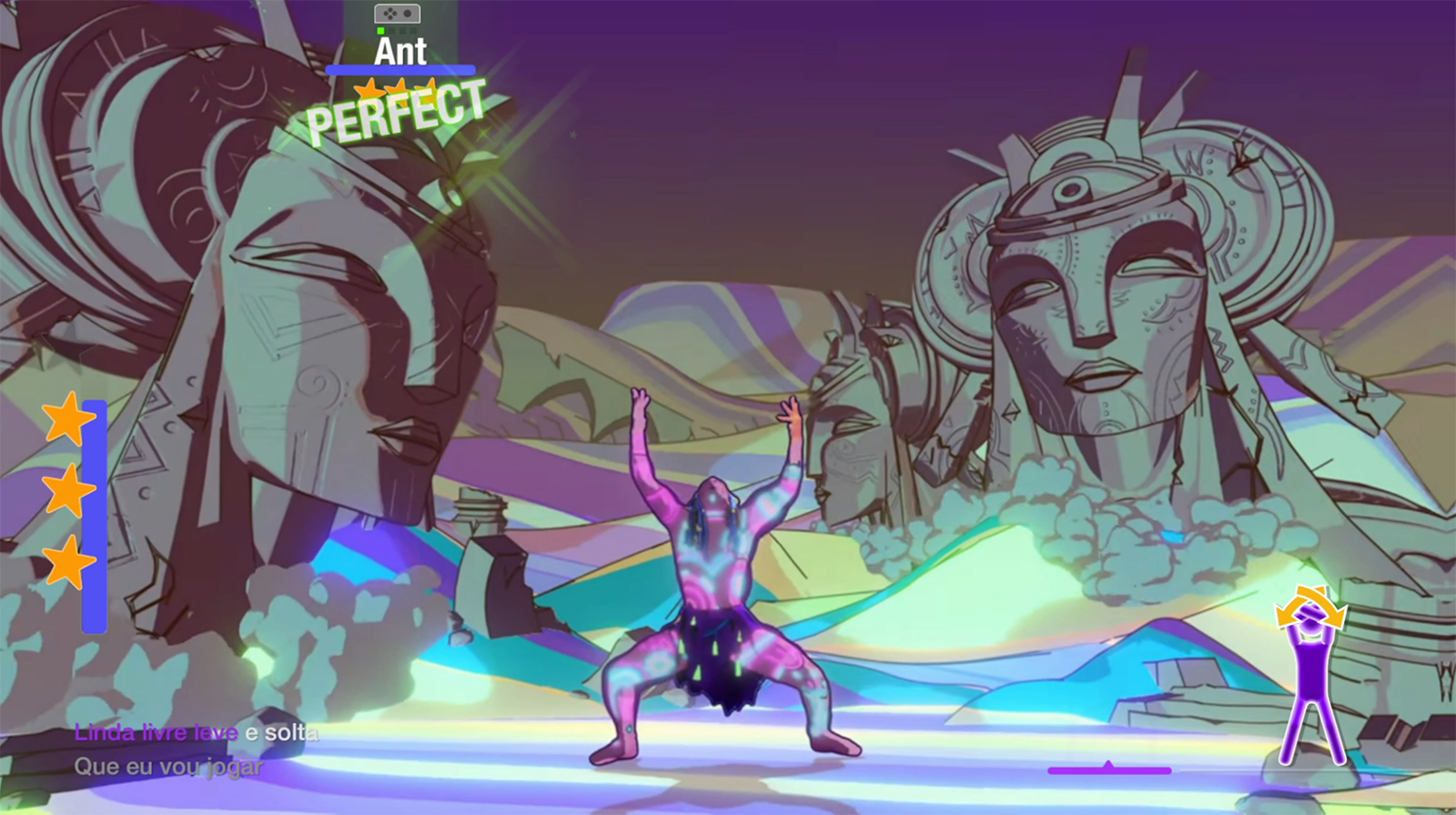 Combine the 40 base tracks with hundreds of tracks available on Just Dance Unlimited, the series subscription program which is only $24.99 a year – a steal for someone who wants to dance often or use this game as an exercise system – and you have a nearly unlimited number of dances to master.

Between the single player mode, co-op mode, kid’s mode, leaderboards, and sweat mode – which tracks calories burnt and time spent dancing – along with 200 gift machine rewards, 142 avatars, 63 skins, and 143 aliases available, and you have literally hundreds of reasons to return to the game continuously until the inevitable next release comes. I may not be a dancer, but I’ll definitely pay more attention to this series from now on.

There’s no doubt that Just Dance 2022 has fallen into some of the traps of other annual games by not making it feel like a total makeover, but once you experience the quality choreography and improved visuals, you can’t deny that Ubisoft is still trying to deliver an exceptional product where it counts: the dancing and song selection. Even as one who is slightly out of touch with current hits, most of them successfully motivated me to get off my butt and start dancing.