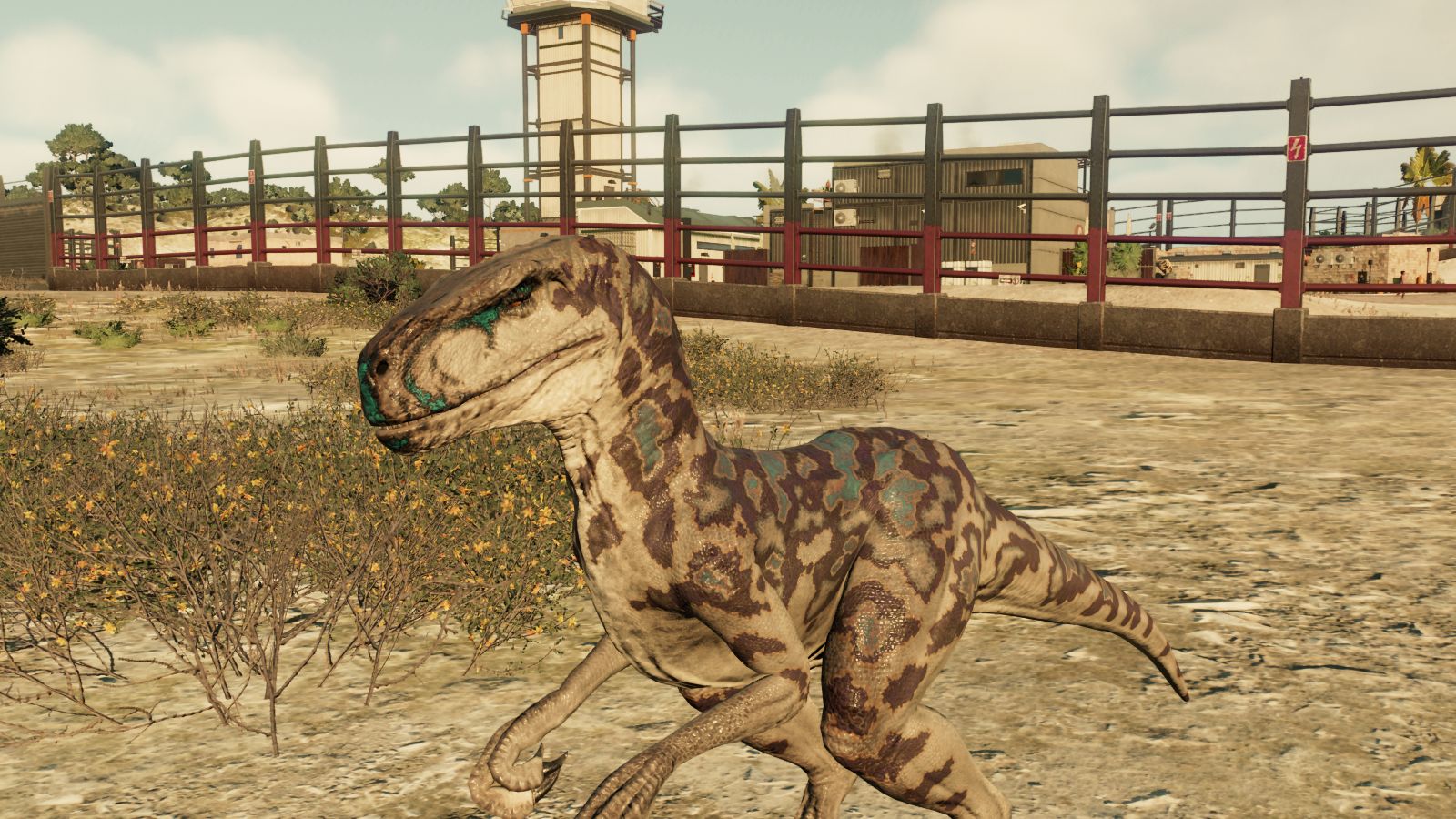 Jurassic World Evolution 2 released its Dominion Malta Expansion and Update 5 this week on December 8th. For fans of the movie franchise, you’ll recognize the setting of the Dominion Malta expansion from the Jurassic World Dominion film earlier this year. This time you’ll travel overseas to Malta, with the events of the newest campaign taking place just before the events of the film. If you haven’t seen the film and are worried about spoilers, this is your warning to turn back now!

The new content brings us four new species: Atrociraptor, Lystrosaurus, Oviraptor, and Moros Intrepidus, all of which come with 12 body colors, and 7 skin patterns each. There are also new 2022 skin variants for some existing species.

While there may only be four new species in this expansion, I have to say, these are some of the coolest and most adorable ones yet. The Atrociraptor not only looks fierce, but when he attacks guests, the animation is epic. It gives me chills how he sizes the guests up, looking for the best plan of attack, before pouncing! I am pretty sure my heart melted when I saw the lil Lytsrosaurus come wobbling out of my hatchery for the first time. They are SO adorable. The Oviraptor is both majestic and precious at the same time, the strut on these little guys is everything. The color combinations you can use to design all of these new species are gorgeous, and I had fun experimenting with different skins and variations. 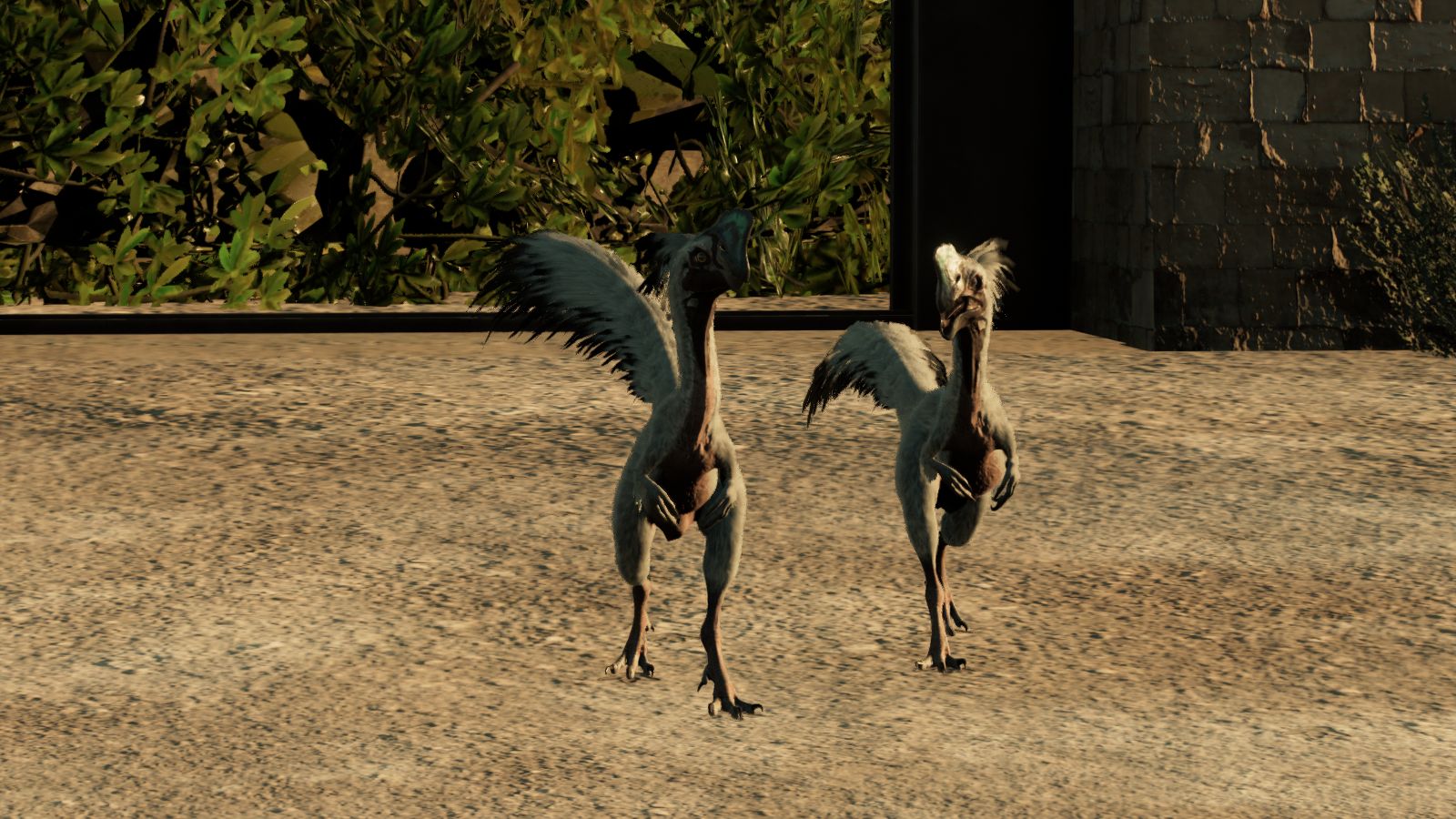 The Oviraptor may be small, but these little guy are FULL of personality! Easily one of my favorite species they have ever added to the franchise!

The campaign switches things up a bit. Instead of using expeditions and fossil extractions, you work on the Dinosaur Exchange to get new species into your park. Along with the new dinos and setting, you’ll get themed buildings and decorations to tweak the look of your park! These decorations are very similar to the theme of the Dominion movie with a Mediterranean isle vibe, so if you liked that you’ll love playing with all the new stuff in this expac! I especially enjoyed the hotel, which has a gorgeous pool the guests can lounge by, and extra ambiance at night when it lights up. You can bounce around between three different islands, which are all beautifully done with rocky terraces along beautiful ocean fronts. It’s a nice change of pace from previous expansions. 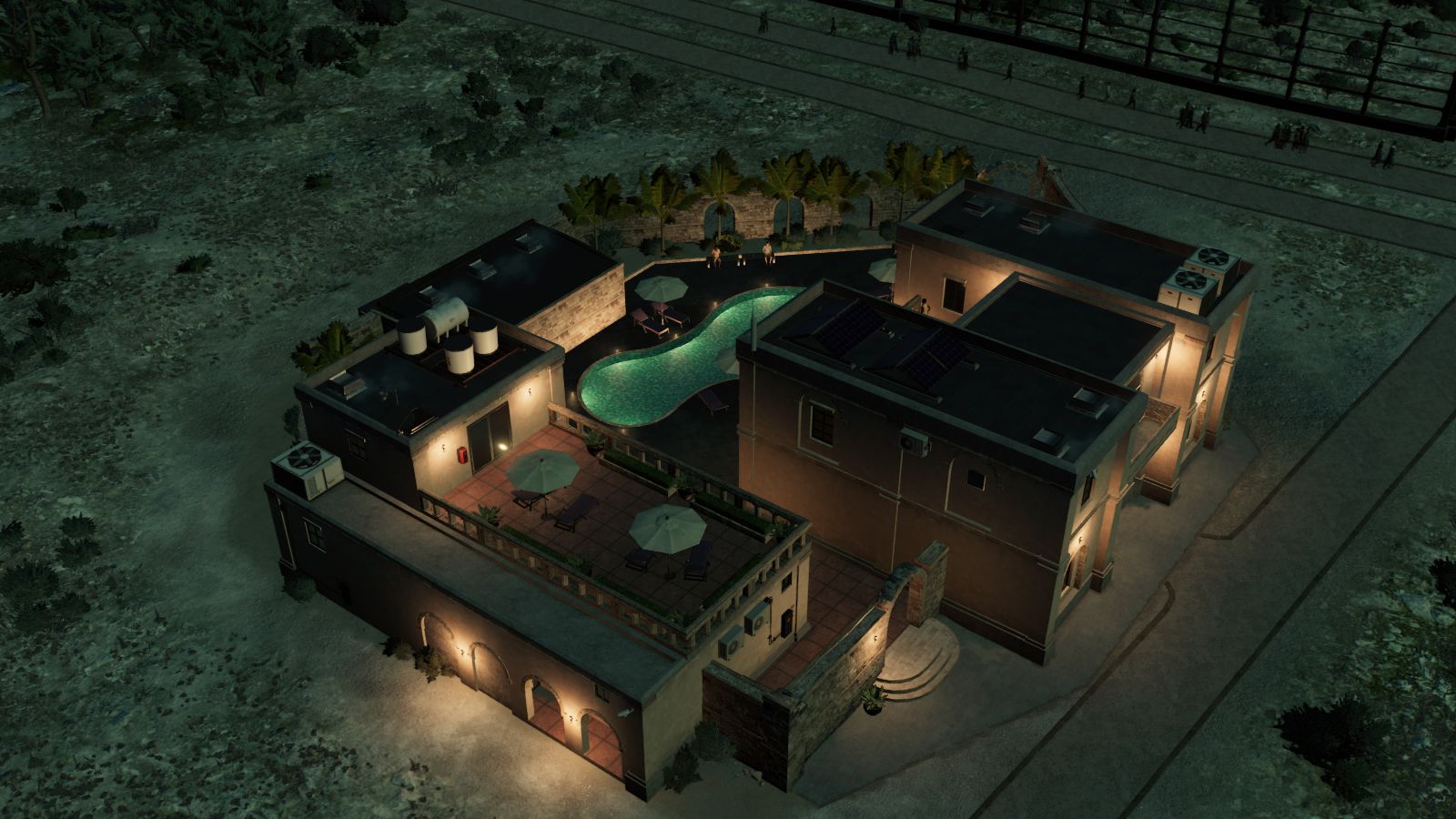 The Dominion Malta expansion hotel. I really liked decorating with the buildings from this expansion!

The only thing that really didn’t grab me with the Dominion Malta expansion is the new Send and Summon feature. Essentially, you can wrangle up wild dinosaurs while in a vehicle and send them to a targeted location. While I think the idea is there, the execution of it is a bit clunky. The Send part of it doesn’t go very far, so you have to keep Summoning and driving while wrangling up wild dinos. There are three different areas (cone, circular, and frontal) and it isn’t always obvious which one you need to be on in order to send. I didn’t enjoy using this feature, but with some tweaking I think it could accomplish what it is meant to do. 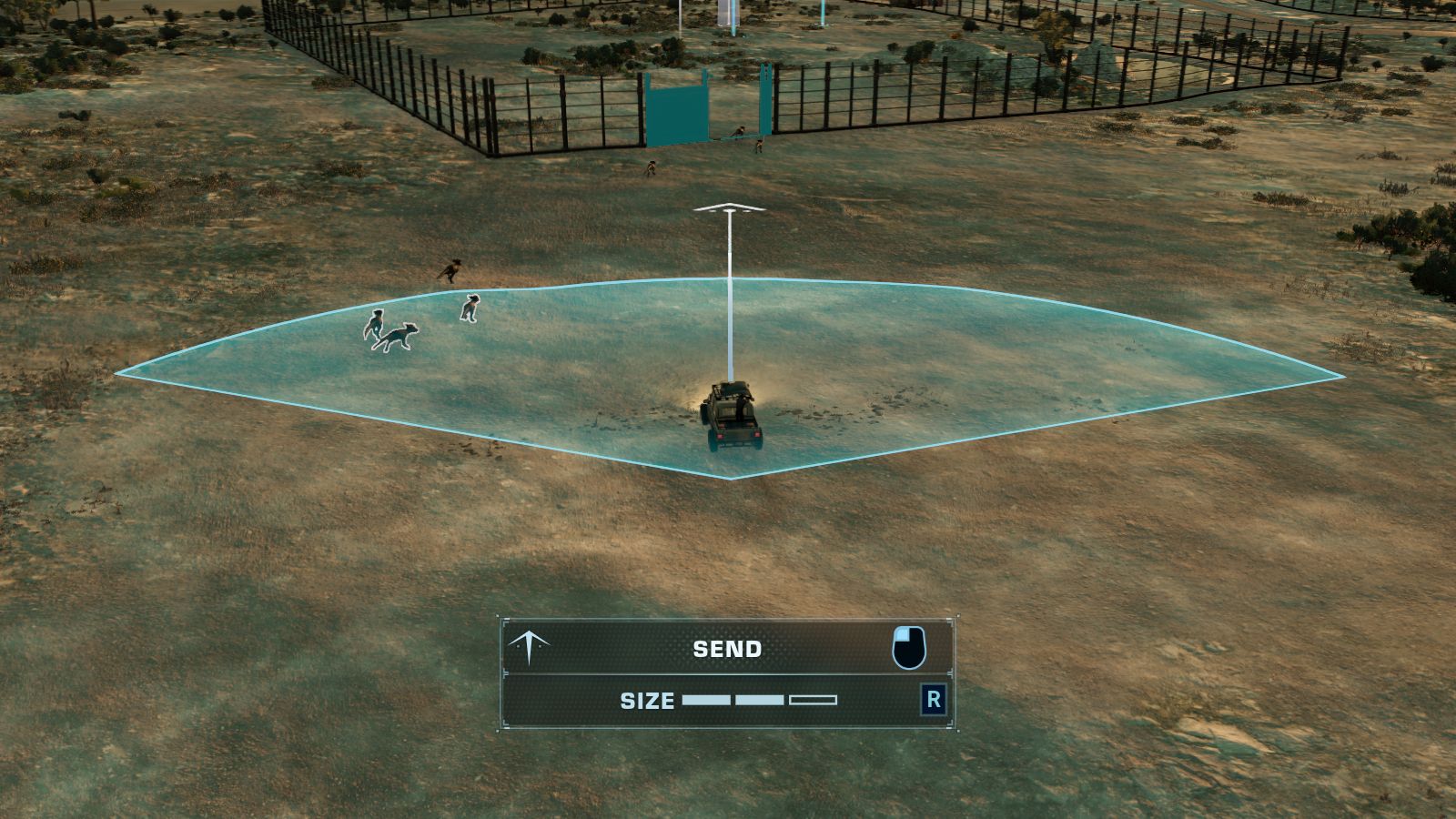 The new Send and Summon feature could use some tweaking. It felt really clunky and I didn’t enjoy using it.

I am happy to see that they once again scored the voice actors from the film franchise to voice their parts within this Dominion Malta expansion. Lewis Dodgson is voiced by Campbell Scott once more, the sassy and strong Kayla Watts voiced by DeWanda Wise, Soyona Santos voiced by Dichen Lachman, and Barry Sembene voiced by Omar Sy. I felt that this added a lot to the Jurassic World Evolution franchise from the start, and certainly adds to the immersion when you’re playing through a campaign. 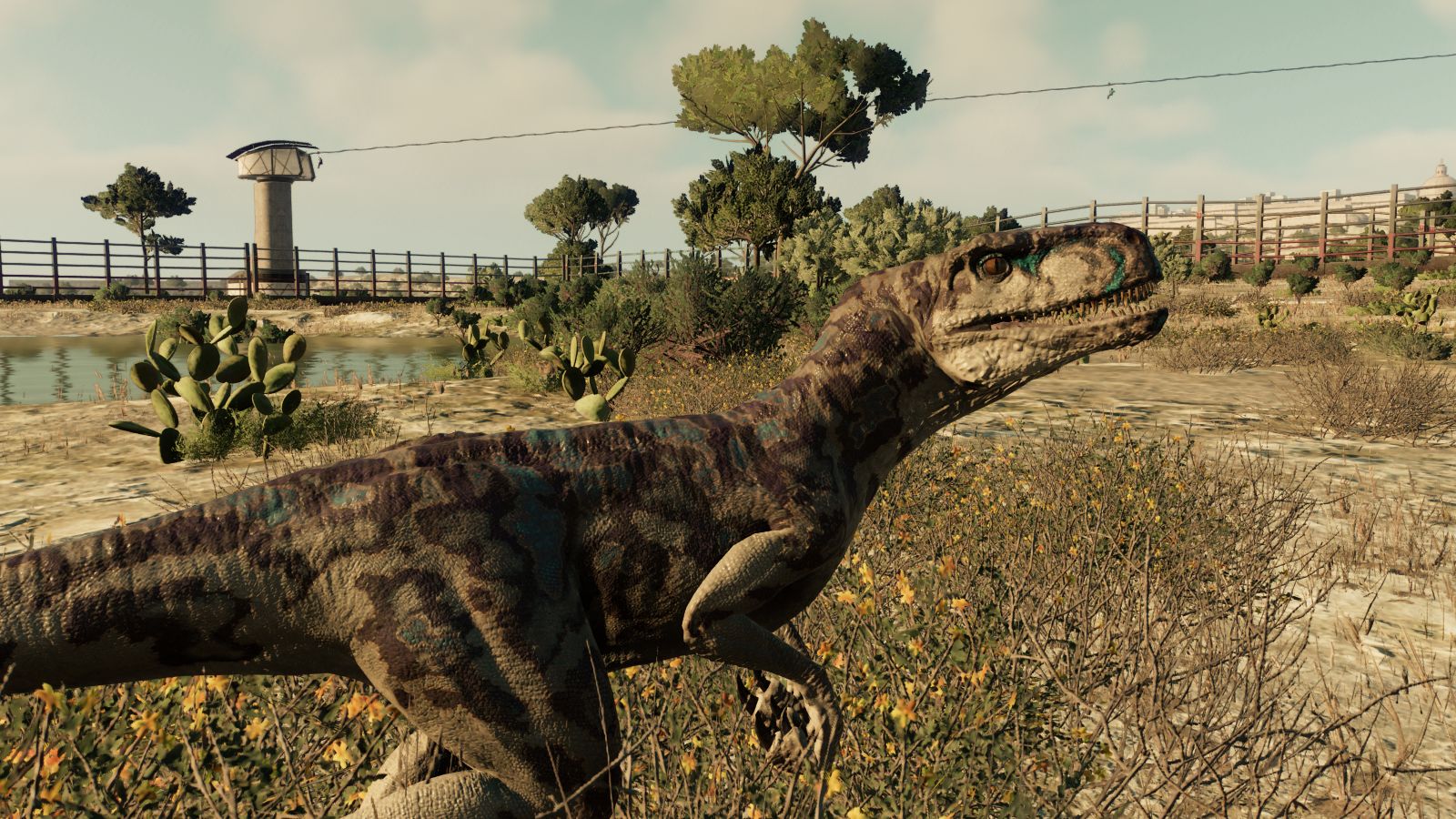 One of my Atrociraptors patiently waiting for the zipline to break over his enclosure so he can have a snack.

Update 5 was also released on December 8th, and it is free for anyone who owns JWE2. It brings with it new Challenge Levels, new tiny dinosaur behaviors which includes attacks on goats and guests, along with some UI and quality of life changes. All of which can be read in further depth on their website here!

You can pick up the Dominion Malta expansion for $19.99 on Steam, and as of publishing this article, the base game for JWE2 and a good chunk of the DLC and expansions are also on sale!

I have been a big fan of the JWE game franchise from the start, and the Dominion Malta expansion adds some great new decorations and species for you to play with in your parks. The Oviraptor and Lystrosaurus are precious, and honestly make the pack worthwhile just on that alone. A fun new Campaign that aligns perfectly with the Jurassic Park Dominion movie will keep you busy, and Update 5 brings in new Challenge Levels if the Campaign isn’t your thing. If you’re a fan of the movies and like park builders, you can’t go wrong with the JWE games, and Dominion Malta fits in perfectly.

Holly Hudspeth is a best-selling author living in Fort Worth, Texas. She has six published novels to date; The Skyy Huntington Series, which is an epic dark fantasy adventure, and One Small Detail, a stand-alone medieval fantasy. Holly also enjoys writing fan fiction based on her avatars from games such as EverQuest, Elder Scrolls Online, and World of Warcraft. Her first major purchase at the established age of nine was the NES, and she has been gaming ever since. She enjoys fantasy games, city builders, RPGs, MMOs, SMITE, and The Sims franchise. Most nights she is in SMITE with her husband and friends, or playing ESO. When she isn't gaming, she is probably either at Disney or planning her next trip there.
Related Articles: Jurassic World Evolution 2: Dominion Malta
Share
Tweet
Share
Submit