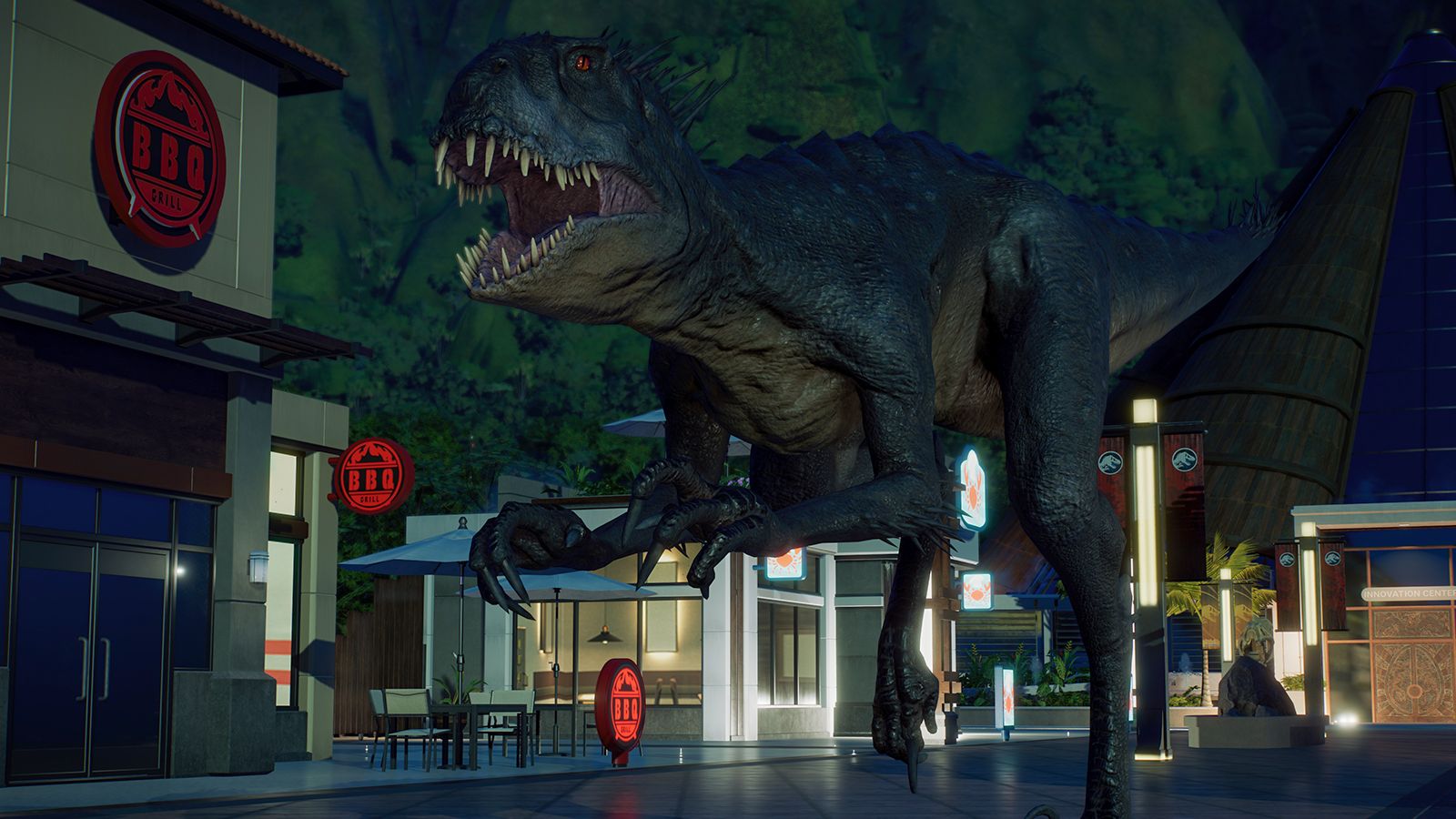 Jurassic World Evolution 2 recently released two new DLC packs for the game, and to say I was excited is an understatement. My 8 year old son and I LOVE the Camp Cretaceous television show and have watched all four seasons twice now, so when I saw we could now bring the Scorpios Rex into our park I was giddy!

The Camp Cretaceous and Early Cretaceous DLC’s, which are both available now, bring new species to the game, along with new skins for already existing species! You’ll be able to add the Wuerhosaurus and Minmi to your land enclosures, as well as the titanic Kronosaurus to your lagoon, and the Dsungaripterus to your aviaries with the Early Cretaceous DLC. With Camp Cretaceous you can add the Kentrosaurus, Monolophosaurus, and Ouranosaurus. But let’s be real, we’re all here for the brand new, and very terrifying Scorpios Rex.

I started a new sandbox map to get things kicked off for this review. I built a lagoon to house the massive Kronosaurus, and was not disappointed. He’s not only a sight to behold, but the guests love him. I’m still getting the ranger bug where they can’t get to him unless he’s by the side of the lagoon, but it has not caused me any serious issues thus far. The only marine species I’ve had in my parks until now was the Mosasaurus, so I also added in some Plesiosaurus to spice things up. So far, everyone is happy, and I love watching my giants swim around the lagoon.

Even though it’s not relevant to the DLC, I added some Indominus Rex to the park since I’ve never had them and my son wanted to watch them eat some people. While I am sure my park guests didn’t appreciate the experiment, we certainly enjoyed watching them devour guests before placing them back into their enclosure. It’s the little things…

After the slight detour, next up was creating an enclosure for the new Parasaurolophus skin variation. If you’ve watched Camp Cretaceous you probably remember the episode where they are floating through the caves and encounter the bioluminescent Parasaurolophus. If you’ve not seen it, here is a short clip that is worth watching, because these guys are gorgeous and an amazing addition to the park. I’d dare say they are my favorite dino yet, but I am a sucker for sparkly and glowy things, so that makes sense. They are just so relaxing to watch, and they frequently interact with one another in heartwarming ways.

But enough of the sentimental stuff, we all came for the main event, and that is Scorpios Rex. My son and I are obsessed with this guy in the Camp Cretaceous TV show. If you thought the Indominus Rex was scary, you haven’t seen anything until you watch the new and terrifying Scorpios Rex in action. He is one of Wu’s creations that he had hidden in a secret lab, and I am sure you can guess what happened… ( spoiler alert ) he escaped.

Scorpios Rex DNA is a mix of scorpionfish and several other carnivorous dinosaurs. He is stealthy, sneaky, and incredibly smart, and as if that isn’t enough he’s poisonous as well! This guy is everything we’d hoped for, and we had a fun time altering his DNA to make a Scorpios with green and blue spikes. He is so cool and so scary, and I can’t wait until he inevitably escapes and kills people.

I had a fantastic time with the content from these two DLC packs, and look forward to what the future of the game has in store for us! You can pick up the Camp Cretaceous DLC for only $9.99, and the Early Cretaceous DLC for $7.99. Also, do yourself a favor…if you have not watched Camp Cretaceous on Netflix go do it. It’s not just for kids, it’s REALLY good, intense, and quite scary. The Scorpios Rex will also be in the upcoming movie, so check out his backstory and then set him loose upon unsuspecting guests in your park! Thanks for reading my review here on Gaming Trend!

If you already love the Jurassic World Evolution 2 game, you can’t go wrong picking up the DLC packs. They let me play with some of my personal favorites, and with loving the Camp Cretaceous TV show as much as I do, it was very exciting to see them walking in my very own park. The lagoon creatures are always impressive to watch, and I still have to add in an aviary to check out the new Dsungaripterus species. I’ve loved both installments of the Jurassic World Evolution franchise, and the Camp Cretaceous and Early Cretaceous DLC are just icing on the cake. This game can be dangerous for me to play because I get so involved that I lose track of time.

Holly Hudspeth is a best-selling author living in Fort Worth, Texas. She has six published novels to date; The Skyy Huntington Series, which is an epic dark fantasy adventure, and One Small Detail, a stand-alone medieval fantasy. Holly also enjoys writing fan fiction based on her avatars from games such as EverQuest, Elder Scrolls Online, and World of Warcraft. Her first major purchase at the established age of nine was the NES, and she has been gaming ever since. She enjoys fantasy games, city builders, RPGs, MMOs, SMITE, and The Sims franchise. Most nights she is in SMITE with her husband and friends, or playing ESO. When she isn't gaming, she is probably either at Disney or planning her next trip there.
Related Articles: Early Cretaceous, Jurassic World Evolution 2 Camp Cretaceous
Share
Tweet
Share
Submit