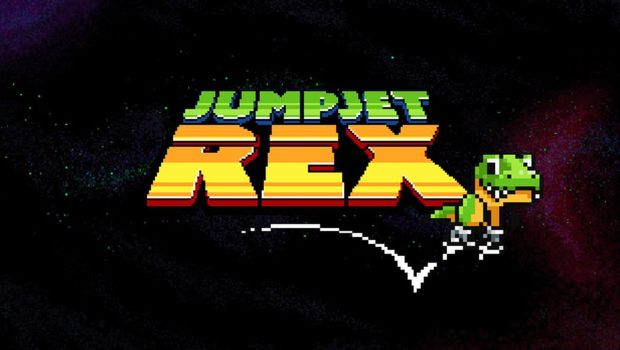 The average age of a “gamer,” at least according to the ESA’s measurement methodologies, is 30. That means there are more of us from the so-called Nintendo Generation who grew up on games like Mega Man, Ninja Gaiden, and Super Mario Bros. than the bombastic AAA titles of today. We remember renting games from Blockbuster for the weekend, we remember when controllers had two face buttons and a D-Pad, and we remember a level of difficulty in our platformers that many of the younger folks had never seen. Thanks to the likes of games like Super Meat Boy and Ori and the Blind Forest, this genre of rewardingly difficult platformers has once again begun to rise.

JumpJet Rex, a 2D platformer from Treefortress, a three-man indie show from Edmonton, Canada speaks to me. I’ve played a good chunk of the more recent old-school platformers, but none of them have sparked that feeling of nostalgia quite the way JumpJet Rex has. Maybe it’s the overall look of the game, maybe it’s the old-made-new gameplay, but it was pretty clear after just a short while that this game is one you absolutely have to have in your library.

JumpJet Rex is an 8-bit platformer at its core. The story is simple enough – dino-kind is in danger of extinction due to a massive asteroid hurtling towards the Earth (seems like a frequent problem for the dinosaurs, really). The Dino Council can’t build a missile to stop it fast enough, so it’s up to you, JumpJet Rex, to reach the asteroid and stop it.  (“Don’t wanna close my eyes….don’t wanna faaaaaallll asleep”)

Rex, for reasons that really don’t need to be explained, has a pair of boots with jumpjets attached that allow him to infinitely jump, rocket, and dash in any direction. This creates a platforming adventure that will immediately remind you of a combination of several classic NES and SNES games, complete with that old-school challenge and reward.

The level designs are heavily varied, and very well balanced. Evocative of clear-inspiration Mega Man, every level has a theme to it. Ice levels with spiky obstacles, stark and cold space stations with electrical blocks, and even a level that looks like an old-school Gameboy are just a small sampling of the 40 levels in the game.

If there is one thing that gives players a sense of accomplishment, especially after dying (a LOT!) to reach them, is defeating an extremely difficult boss. JumpJet Rex has bosses that serve as gatekeepers between the world stages of the game. To reach them, however, you’ll need stars.

So many levels…so many deaths.

Each level has three stars up for grabs, and unlocking the next area requires a certain amount of them to proceed. You get one for completing the level, another for getting through the level without dying, and a final one for doing it under a certain time. It’s the final star that creates some of the most difficult and rewarding moments in JumpJet Rex. On the surface, “Reach the finish in 40 seconds” sounds like it shouldn’t be that daunting, and with a little practice of the game’s mechanics, you can probably pull it off, but you need to be prepared to die….a lot. Sometimes the levels are fraught with lasers, spikes, and electrical traps. Other times it’s having to hit switches to open gates to pick up the rings necessary to open the final door. Later levels put time limits on locks, asking you to use your hopefully-honed skills to reach the other side of the level in time. Any way you slice it, it’s incredibly challenging and even more rewarding when you succeed.

Let’s do a little math for a moment. There are a total of 129 stars to be had in JumpJet Rex. These are spread across 40 stages, and you’ll need 80 of the 129 stars to face the final boss. This means that you’ll need to pick up half of those stars by completing sub-objectives. This means either time trials (even if that’s not your thing), or beating the levels without dying, which can be very, very difficult. This creates a bit of a grind near the end of the game as you are literally scrounging for stars, replaying the same level over and over. Mark my words, you are going to leave a trail of little dead Rex eyeballs in every level until you master the crackerjack timing needed. Honestly, it’s the only part of JumpJet Rex that can be a little bit annoying — repetition.

There are certainly moments where I’ve thought to myself “That’s impossible! Nobody could do this level that fast!”, but JumpJet Rex has a feature that can help guide you to victory — a ghost mode. At any point you can select an “opponent” to race against. This allows you to pick anyone from the leaderboard and have a ghost of how they pulled it off running ahead of you. Similarly, once you’ve completed a level, you’ll see your own best run zipping along semi-opaque ahead of you (or behind you as you improve).

Coins in JumpJet Rex, as well as the “treasures” you can detect and find in the levels (often cleverly hidden behind secret blocks and paths) unlock an incredible wealth of new looks for Rex and his home. The treasures are often wall-hangers like a giant strip of bacon, an Incan head mask, a giant sign declaring yourself a “Filthy Casual”, but the coins buy you entirely new clothes for Rex. Want to look like a Ninja Turtle? Spend the coins, buy the bandana, and change the colors to match whichever brother you might like. My personal favorite is the top hat and monocle, turning my Rex into someone far more fancy to complete his little space adventures.

For those of you who absolutely hate yourselves, there is a mode to be had called RageQuit Rex. This mode gives you just three lives to complete the entire game, but reduces the requirements for moving to the next level down to just one star. It also removes waypoints, because if you are using waypoints in this mode you aren’t going to get very far. I can’t, for the life of me, imagine a world where that’s possible, but knowing how the Internet works, I’m absolutely certain somebody has already done it. When you get to Tower of Power, and you manage to get through it without spending all three of your lives, please send me a video. If you remember the NES Teenage Mutant Ninja Turtles level where you have to swim through the seaweed section, you’ll know exactly the sort of pain Treefortress has in store for you.

JumpJet Rex features a local cooperative play mode. You can team up with a friend to tackle the game together. It reminds me of New Super Mario Bros U on the Wii U as your friends can be as much a help as a hinderance. Still – it’s a neat twist for an otherwise single player game, and it brings a whole new strategy to boss fights.

Looking forward, Treefortress Games has also stated that shortly after launch, JumpJet Rex will pick up some new modes including Deathmatch, Capture the Flag, and King of the Hill. I’m not sure if these will be offered as DLC or as a free update, but if competitive play is your jam, those will be a welcome addition.

If you are a fan of old school games like Mega Man, this may be the easiest purchase you ever make. JumpJet Rex’s new-school approach to old school platforming, and the addition of the time trial elements and collection itch to scratch, this game is an absolutely must-have.

Ron Burke is the Editor in Chief for Gaming Trend. Currently living in Fort Worth, Texas, Ron is an old-school gamer who enjoys CRPGs, action/adventure, platformers, music games, and has recently gotten into tabletop gaming. Ron is also a fourth degree black belt, with a Master's rank in Matsumura Seito Shōrin-ryū, Moo Duk Kwan Tang Soo Do, Universal Tang Soo Do Alliance, and International Tang Soo Do Federation. He also holds ranks in several other styles in his search to be a well-rounded fighter. Ron has been married to Gaming Trend Editor, Laura Burke, for 21 years. They have three dogs - Pazuzu (Irish Terrier), Atë, and Calliope (both Australian Kelpie/Pit Bull mixes).
Related Articles: JumpJet Rex
Share
Tweet
Share
Submit