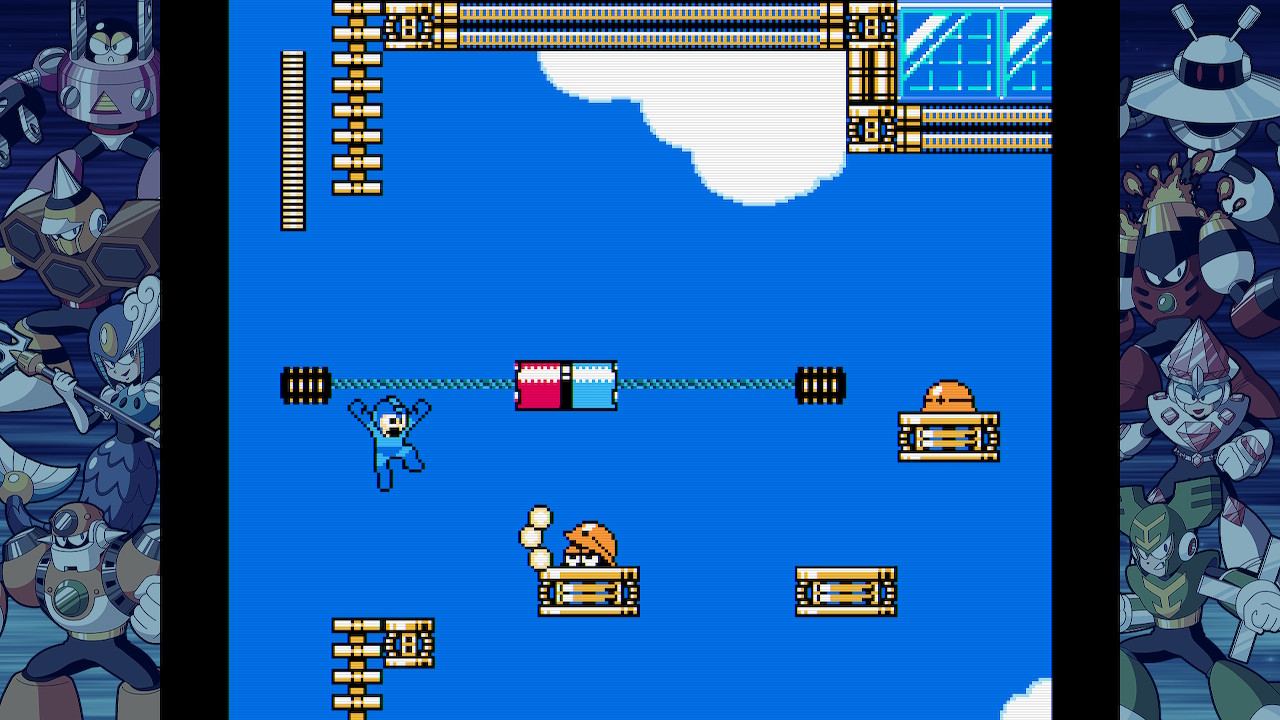 Everyone knows what this is. It’s Mega Man! You jump, you shoot, you fail to keep Dr. Wily locked up permanently. It’s been a good time for thirty years. Over the past few years, Capcom has released two different Legacy Collections with all of the 10 “original series” Mega Man games. Oddly enough, Legacy Collection 2 wasn’t released on a Nintendo console when it came to PlayStation 4 and Xbox One, until now of course, and the Nintendo Switch feels like the perfect home for both of these collections.

I can already say with certainty that the Nintendo Switch version of Mega Man Legacy Collection is the definitive version. This one contains all six main Mega Man games, and the Japanese Rock Man variants. You can play them in their “original” size format, “full” size (where it leaves a border you choose (or black bars) on the side, or “stretch” size where it stretches out the game to fit widescreen.

It’s ugly as all hell, but the option is nice.

New to the Nintendo Switch version are two features: “Turbo” and “Rewind.” Turbo is a fantastic edition to the collection as it eliminates the slowdown featured on the original versions of the game. There is an option to play with the authentic “slow-down” caused by an imitation of NES hardware limitations, but being able to play the game smoothly without the slowdown is a nice touch.

Both games have a robust museum with plenty of interesting pieces of history.

Another addition is the inclusion of a “Rewind” feature. This is a completely optional feature to help ease the difficulty for newer players. To use this feature, hit the button corresponding to the rewind button (for me, I mapped it to ZL) and the game will seamlessly move in reverse, including the music.

Challenges return to the Nintendo Switch version, but sadly the challenges included on the 3DS version through Amiibo support are still locked behind the Mega Man amiibo. However, these challenges are about the same as they were on the other versions of the game: bite sized portions of the games mixed together with an online leaderboard.

You’re all witnesses. I was once the best player in the world for this stage on the Switch version.

Mega Man Legacy Collection 2 is a different beast. Each of the 4 games included (Mega Man 7-10) have their own drives and features, including all of the downloadable content from Mega Man 9 & 10. Sadly, there is no rewind feature for these four games, but there is a special “armor mode” where Mega Man will take half the damage.

Now, I can wait twice as long for this dinosaur to stomp me to death. Wonderful.

Legacy Collection 2 does feature “Checkpoint saves” where each checkpoint will automatically be saved in the game and can be loaded at any time. However, this also saved the damage Mega Man had upon reaching that checkpoint. If anything, this feels like a way to get around getting a game over.

When comparing Legacy Collection 1 & 2, it’s immediately clear that the first collection had more care put into it. Instead of the challenges being clever mixes of all four games, they are separated by game and most of the “challenges” are simply asking the player to run through either half of a level or an entire level under a time limit. This feels hastily put together just to have something comparable to the first collection.

Use a Mega Man Amiibo to unlock additional challenges for this mode. The Legacy Collection 2 ones are more of the same.

I guess we’ll have to find another way to own a physical copy of Mega Man 7.

Besides these small issues, I had a great time experiencing all of the original Mega Man games in their true-to-form glory. The challenges are fun (except for Legacy Collection 2’s), and being able to play them all from one system is extremely convenient. Now’s the perfect time to tackle the series before Mega Man 11 comes out later this year.

Mega Man Legacy Collection 1 and 2 contain a great set of games. The Switch version is the definitive version of the first Legacy Collection with Legacy Collection 2 following along in its shadow. Rewind is a great feature, while armor mode is lacking any sparkle. If you're going to pick up this collection, digitally is definitely the better offer.

Sean Anthony likes to combine two of his passions: gaming and writing. Gaming has been a huge part of his life ever since he played his first game as a child, Kirby's Adventure. He aspires to have his name attached to an article that makes the whole world go, "Huh, that's neat, I guess."
Related Articles: Mega Man Legacy Collection 1 + 2
Share
Tweet
Share
Submit