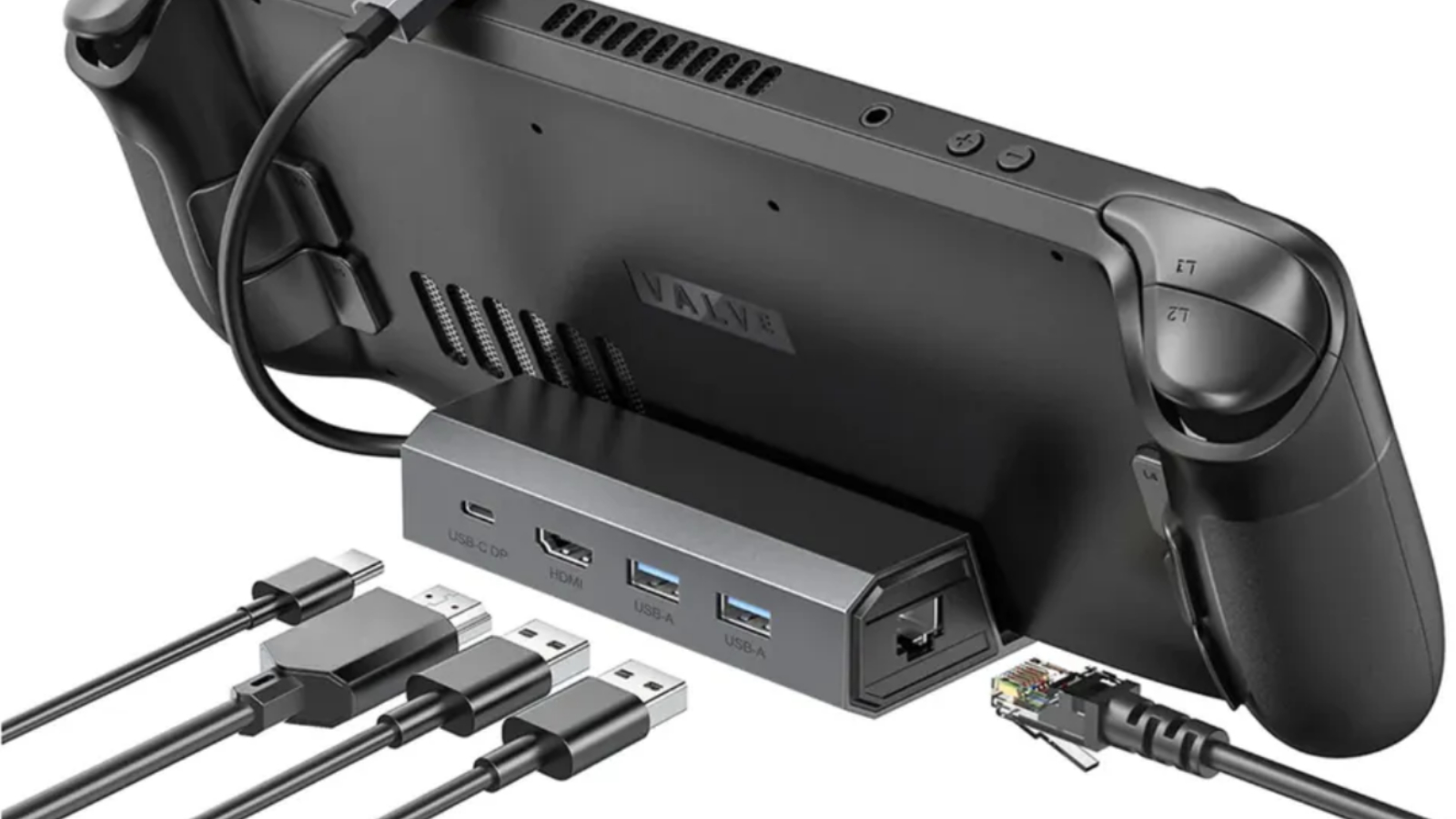 While Valve has finally announced an official dock for the Steam Deck, they sure did flub the landing on the price. At $89.99 for a simple dock, they’ve priced themselves right out of contention. We’ve reviewed several USB-C hubs that are less than half that price, Now we’ve gotten our hands on a dock that not only incorporates the aforementioned USB-C hubs, but also does so in a solid metal dock form, and with built in NVMe support, if you are inclined. Let’s unbox and check this out the JSAUX 6-in-1 Hard Drive Steam Deck Dock.

Ok first and foremost, JSAUX isn’t explicitly calling this a Steam Deck Dock. That said, I trust what my eyes see, and that’s a Steam Deck on the box. Dispensing with the hamfisted slight of hand, there’s a great deal to like here.

The first version of this dock actually launched in July of this year, but it came without the M.2 storage option. Now, we have an all-in-one solution that not only provides excellent high-speed interconnection with our peripherals, but also offers a user-expandable storage option that doesn’t require you to open the back of your Steam Deck, or worry about introducing heat issues to the device. If it can live up to that promise, we may have found the ultimate Steam Deck Dock.

Looking around the device, you’ll find very similar specs to other 6-in-1 solutions. The HDMI port will allow for 4K resolution at 60Hz, and 2K at 120Hz – more than your Steam Deck will likely output smoothly, but providing enough headroom for whatever the inevitable Steam Deck 2.0 looks like. This will allow for better color capture and smoothness as your external monitor is very likely better than the panel on the device. Two USB-A 3.1 ports provide 5GB/s transfer rates simultaneously, allowing you to connect a mouse and keyboard or even daisy chain off the port without having to worry about throughput. Next to those two lies the USB-C port. This port provides additional high-speed connectivity, sure, but also grants 100W charging. This is FAR more than is needed for the Steam Deck as the device’s full charge speed is 45W. This leaves plenty of juice for any other device you might plug in, such as your phone or a tablet. The last port is the RJ-45 Ethernet, and it runs at full gigabit speed. It’s handy to be able to plug in and get line speed while loading games. The big differentiator, however, is hidden on top of the device. 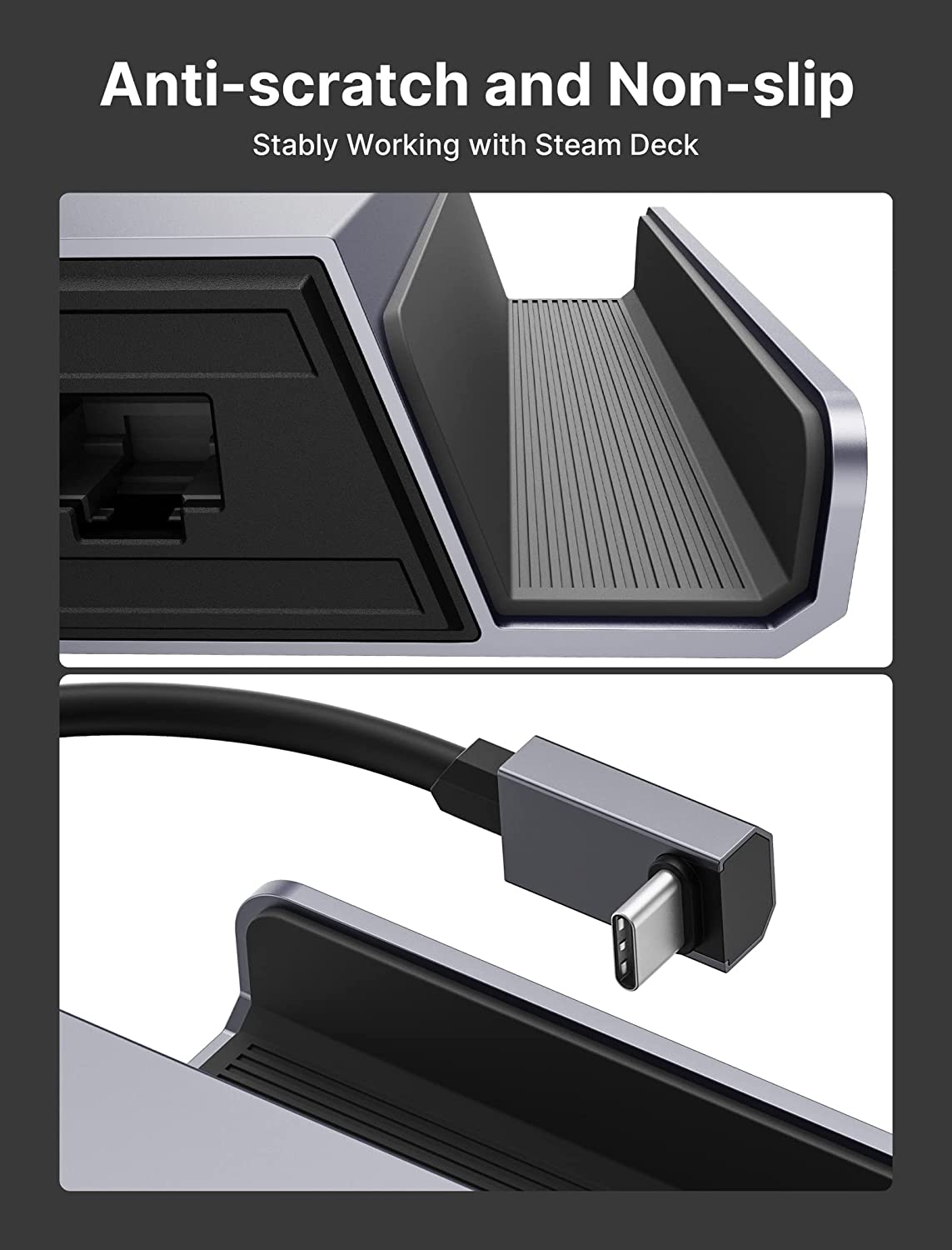 Removing the top cover of the milled aluminum body reveals a full-length M.2 slot. Supporting 2230, 2242, 2260, and 2280 form factors, the device supports 3300 MB/s read and 2600MB/s write speeds, placing it squarely in the PCI-e Gen 3 range. This matches the speed of the included internal drive, making it perfect for seamless gaming. You’ll need a little bit of know-how in Desktop mode to configure it, but you’ll be happy to know the JSAUX team has made a script available to do it all in an automated fashion. Or, if you prefer, you can watch me fumble through it in my video above by hand. Whichever makes you happy.

Once configured, the device becomes another install target for Steam, just as it would be on PC. But why would you want to have some games installed on a dock, making them only playable when docked? When you look at games on the Steam Deck you’ll find several icons that carry with it specific information about how well the game plays on the device. Games with the green checkmark mean it performs well, has a good control scheme, and is readable. Oftentimes, a yellow exclamation mark means the game can be a challenge with that lattermost situation. Those games, especially CRPGs, can be difficult to read on the smaller screen, but would work perfectly when docked. With the addition of a larger monitor, these games become downright comfortable to play. In that way, you may want to keep them separate from your games for travel, keeping them available for when you are at home. 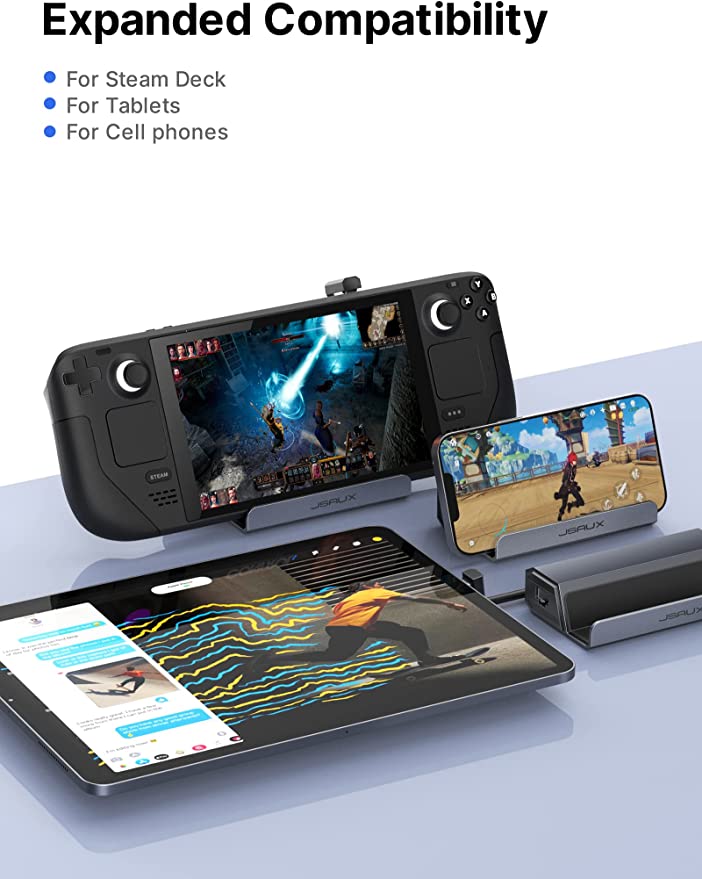 With the Steam Dock shipping, you have to ask what the premium price gets you over something that carries its own external storage capabilities. Well, from the looks of things, you’ll get an extra USB-A port, and that’s about it. Disappointing for how long we had to wait for it.

Ultimately, the JSAUS Steam Deck Dock is very much a nice-to-have item, though not ultimately required. It delivers functionality that you can use, provided you spend time at your desk with the device docked. The fact that it’s tiny and can be thrown into a bag means it can be used as just additional storage if you are so inclined. I am indecisive so it’s handy for me to be able to swap between games at will. Your use case may vary. Either way, it’s beating anything Valve has had to offer thus far, and that’s impressive indeed.

With all of the functionality of the official device, as well as an M.2 interface for additional storage, the JSAUX Dock is the top tier dock on the market.

Ron Burke is the Editor in Chief for Gaming Trend. Currently living in Fort Worth, Texas, Ron is an old-school gamer who enjoys CRPGs, action/adventure, platformers, music games, and has recently gotten into tabletop gaming. Ron is also a fourth degree black belt, with a Master's rank in Matsumura Seito Shōrin-ryū, Moo Duk Kwan Tang Soo Do, Universal Tang Soo Do Alliance, and International Tang Soo Do Federation. He also holds ranks in several other styles in his search to be a well-rounded fighter. Ron has been married to Gaming Trend Editor, Laura Burke, for 21 years. They have three dogs - Pazuzu (Irish Terrier), Atë, and Calliope (both Australian Kelpie/Pit Bull mixes).
Related Articles: Hardware, JSAUX 6-in-1 Hard Drive Deck Dock
Share
Tweet
Share
Submit