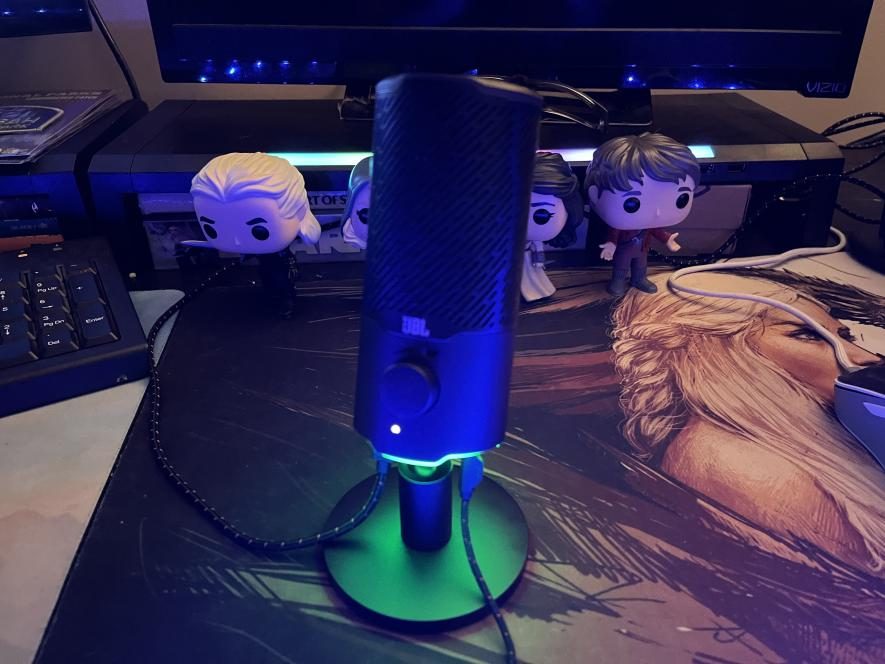 I have been streaming online for over six years now. Multiple platforms, multiple games, and multiple headsets, and I’ve only used headset microphones during the stream. This is mostly due to me being quite new to using a PC for more than Microsoft Office. However, when asked to take a look at the JBL Quantum Stream Microphone, I decided to take a leap and try it out, and wow, this is easier than I ever thought.

The packaging is simple, yet sleek. Included in the box is the microphone already on a desk stand and a USB cable. The microphone also has a 3mm jack for headphones which worked perfectly with my JBL Quantum 400 Headset that I reviewed previously. I read through the small instruction booklet, but it’s pretty simple to set up. Plug it in. BOOM. The mic took about 30 seconds to connect and download to my computer and I was using it on stream less than five minutes later. 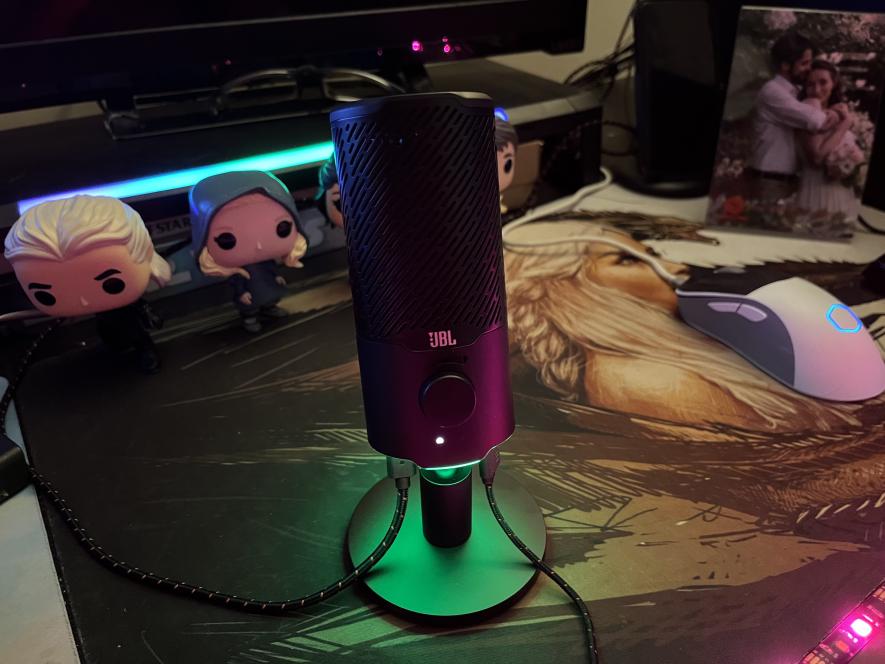 Personally, I use Streamlabs OBS for my streams and the JBL Quantum Stream was an automatic choice for the microphone as soon as I got into Streamlabs and tried to switch to the new microphone. Once in, I had a few friends come into a test stream and the difference was night and day from my headset microphones I’ve used in the past.

When listening back to some of my recordings from before with the Quantum 400 headset mic to the test streams I did with the Quantum Stream; there is no real comparison. It’s crisp, allowing me to hear my voice clearly. Even though the JBL Headset mic was an upgrade from the headset I had before, you can really hear the “tinny” nature of the headset when comparing it to the JBL Quantum Stream. Also, the ease to raise and lower the microphone volume from the microphone itself helped with gauging volumes, especially with games that have jumps in volume once in a while. Clear voice and easy adjustments make for a simple process.

From a physical standpoint, I very much appreciate the size of the microphone. At a little over three inches tall (not counting the stand), it doesn’t take up much room on my desk while also picking up my vocals from at least a foot away quite clearly. There is also a mute tap on the top of the microphone for quick muting for all those with dogs who bark or cats that like to knock things over. Speaking of, another positive aspect of the microphone is its durability. Sadly, my cat decides to knock things off my desk when he’s not getting attention, and the Quantum Stream took a nasty fall due to his toe-beans. Thankfully, the microphone took no damage that I could see on the outside, and everything still worked perfectly when I tested again. I’m not saying you should chuck the microphone against a wall, but I feel confident we can at least call it cat-proof.

One negative thing I found was the difficulty to combine the JBL Quantum Stream with the PC App if you already have it connected to another JBL device. For me, it was the JBL Quantum 400 headset. For the first two times I used the microphone, it didn’t even register in the app at all, so I went on without it. After looking at their website, there was supposed to be a connection from the microphone to the app, so I booted up the app again and found that there was an entirely new update I needed to install before I could use the microphone with the app. While a small complaint, it would have been quite helpful for the update to automatically be recommended when you first plug the microphone into the computer and after it installs the needed drivers. With how easy it was to combine the microphone and Streamlabs, you’d assume it would’ve been equally as simple to combine it with their own system.

It’s a perfect microphone for gamers, content creators, etc who are new to desk standing microphones. I’m still getting my foot in the door when it comes to additions to my PC setup, and with how easy it is to get started using it, and it’s easy integration with streaming software, I’d recommend it to anyone in my boat who wants to try something new while also not going for an overly expensive microphone. At 79.95 on most main retailers, it is definitely worth grabbing if you are looking to upgrade from the headset mic.

A perfect microphone for those trying to upgrade from a headset microphone to a desk microphone. With an easy integration with multiple streaming avenues, and great sound quality, I’d highly recommend it. Especially for the price of 79.95 on most retailers.

Adam is a musician and gamer who loves his partner in crime, Regan, and their two pets Rey and Finn. Adam is a fan of Star Wars, NFL Football, and gaming in general. Follow Adam on Twitter @TheRexTano.
Related Articles: JBL Quantum Stream
Share
Tweet
Share
Submit