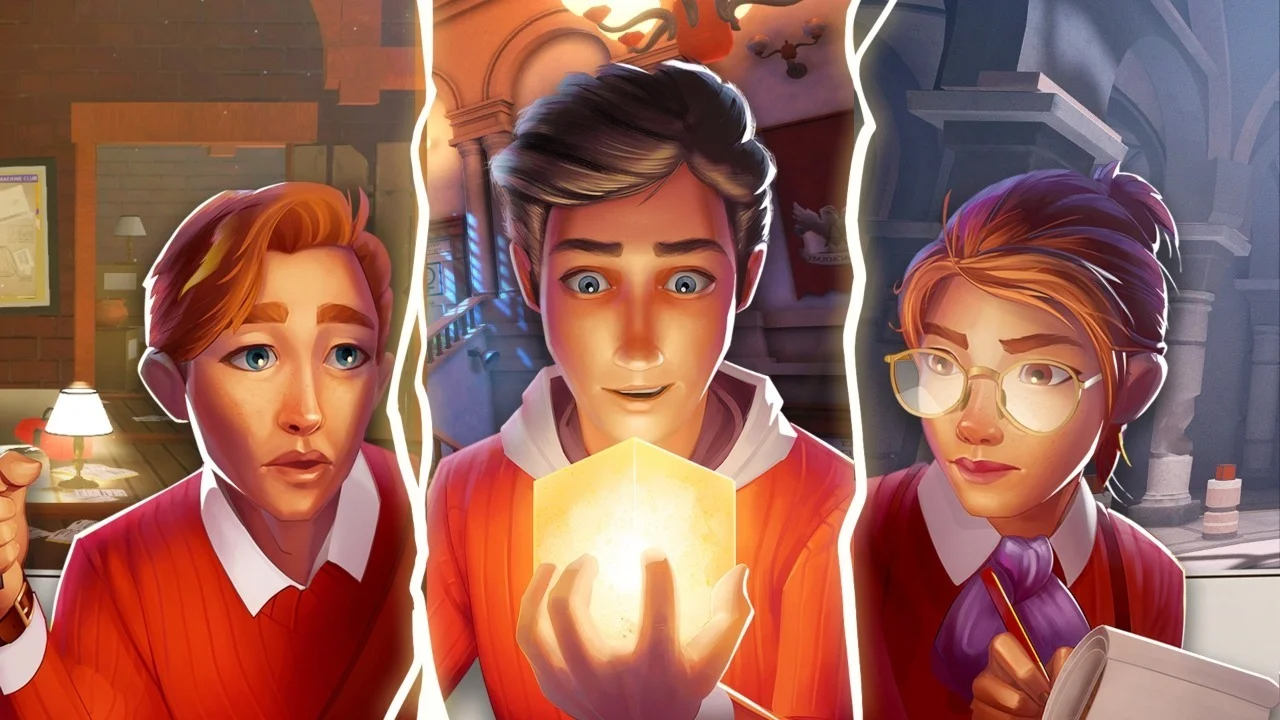 Congratulations, you’ve been accepted to the prestigious Arbor Academy! That is, if you can pass the entrance exam. Croatia-based Pine Studios (of SEUM: Speedrunners from Hell fame) are back with a fresh adventure, this time putting you in the shoes of Sam — a kid invited to a school focused on science, math, history, mechanics, and even symbology thrown in for a dash of flavor. As Sam gets settled into this sprawling boarding school he becomes fast friends with a handful of characters, but quickly finds himself with a fresh nemesis, mysterious robed figures, and even a little magic. Welcome to The Academy: The First Riddle.

The storyline for The Academy: The First Riddle starts straightforward enough. You’ll read a chapter for each subject (yes, really — they are only two short pages each), attend classes, solve a puzzle or two based on the reading, meet up with your friends, and do it all over again. As you progress through the game, you’ll begin to uncover a deeper mystery that will lead to a secret society and, you guessed it, more puzzles. If you’ve read a fantasy themed young adult novel about a kid attending a magician’s school, you’ll have a pretty good idea of what’s ahead. Taking place across three chapters of roughly 3 hours each, it’s a fairly by-the-numbers storyline with characters falling into their trope positions of smart sidekick, cowardly sidekick, and fumbling sidekick.

Since the game features no voice work, my wife and I have taken it upon ourselves to provide incredibly overacted and disjointed voiceovers for the main characters. The Ron Weasley analog sounds like Morty, Maya sounds like a chain-smoking New Yorker, and Sam…well, he has no lines, so he’s a mime. Naturally Sam gets saddled with the dorky kid as his roommate, so we threw him a Mike Tyson-level squeaky voice to fill out his character persona. I highly encourage this as it has led to some laugh-until-tears-come-out moments. The occasional typos in the dialogue only serve to make it more funny.

The Academy: The First Riddle is out for PC, Android, and iOS devices, and you see that reflected in the signature art style. The colors are bright and vibrant, with a visual approach that resembles The Sims. Some areas look great, like the inside of classrooms. The Academy is a large and spacious three-wing University with a large atrium and halls full of classrooms. That said, it’s a bit of window dressing as the game is ultimately linear. You won’t be wandering into open classrooms to discover new quests — it’s all spelled out with icons. Follow the gray ones for side quests (the objects you’ll be fetching are similarly marked), follow the yellow ones for classes, and follow the blue diamond to move the story along. There are a lot of little side worldbuilding objects to discover that can result in badges for your scrapbook. But you won’t struggle to find any of the quests in this world.

Despite a strong suggestion at points in the storyline that you might be attending a Brakebills-knockoff magic school, you won’t be attending a potions or Defense Against the Dark Arts-type class or anything of the sort — just classes and puzzles here. There are moments when you feel like you are playing a mixture of a Professor Layton game set in a Harry Potter universe, and then you’ll run smack into moments where the gameplay loop turns into “Sam is a professional delivery person, sent to do all the work for every student in this school” territory. At one point there is a massive earthquake, trapping some students. One kid doesn’t want to “die of boredom” sending you off on a fetch quest to get him a comic to read while one of the main characters is literally trapped behind an avalanche (the game assures you she’s unhurt, but is that really the point?). Another student thinks that it would be a great time to fix her radio while chunks of ceiling debris is literally falling from the roof. She starts dancing to the tunes coming from her radio once you’ve fixed it, despite the roof collapsing not five feet from where she’s now cutting a rug. Some of the connections in the story arcs could use a bit of refinement — it’s almost like the developers weren’t entirely sure what story they wanted to tell.

The mobile platform focus also results in the PC version being downright ugly in places. Animations can feel “floaty” and some of the effects and environments can be downright plain. The mobile game art style isn’t stressing my video card, so I was surprised to see just how frequently I encountered framerate problems. My system is very close to bleeding edge, sporting a top end 9th Gen Intel processor, 32GB of RAM, and a GeForce 2080 Ti with 11GB of VRAM. You can imagine my sheer amazement at the number of times I had framerate issues. It’s never gameplay impacting as the primary loop involves staring at often entirely static puzzles, but as you’ll see in the short video below, just walking around a fountain can cause dips into mid-20s stutter territory.

If I had one primary complaint with The Academy: The First Riddle, it’s that it is riddled with bugs. In the first 3 minutes of the game I had a portion of the tutorial interface remain stuck on the screen until I restarted the game, the loss of my mouse cursor which forced me to use a controller or my keyboard, and falling through the world which forced me to delete my autosave and restart the game from the beginning. Reinstalling the game was the suggested remedy, but that didn’t resolve any of those issues either. The cursor issue reared its head a few times more during my time at The Academy, as did a total loss of interface where I could hear my clicking on things and the text ticking away, but nothing was happening on my screen.

On the opposite side of the coin are the puzzles. With over 200 in the game, the vast majority of them are real head scratchers. They challenge perception, your math skills, deductive reasoning, observation, pattern recognition, and much more. While some puzzles will have you say “Oh come on, that’s not even close to right!” or when the tools provided stop working (e.g. rulers that won’t draw consistently), it puts a dent into a truly fantastic portion of the game. The Academy will get rolling and deliver a fantastic dozen or so puzzles, only to have UX/UI elements break and spoil the fun. These things are fixable, but in the meantime those moments will pull you out of the moment, reminding you that you are playing a game, not inhabiting a magical world.

The Academy: The First Riddle

At $17.99 on Steam at the time of writing, it’s hard to beat up The Academy: The First Riddle too much. It’s a lot of fun, it’s value priced, and the developers are actively engaged with the community and prepping patches for much of the things I’ve mentioned. Could it be better at launch? Certainly. Does it deliver a compelling stack of puzzles that’ll have you scratching your brain for hours? Absolutely. We have to give credit to Pine Studios for trying something new, even if they might have gotten a C on that “Debugging” class.

Ron Burke is the Editor in Chief for Gaming Trend. Currently living in Fort Worth, Texas, Ron is an old-school gamer who enjoys CRPGs, action/adventure, platformers, music games, and has recently gotten into tabletop gaming. Ron is also a fourth degree black belt, with a Master's rank in Matsumura Seito Shōrin-ryū, Moo Duk Kwan Tang Soo Do, Universal Tang Soo Do Alliance, and International Tang Soo Do Federation. He also holds ranks in several other styles in his search to be a well-rounded fighter. Ron has been married to Gaming Trend Editor, Laura Burke, for 21 years. They have three dogs - Pazuzu (Irish Terrier), Atë, and Calliope (both Australian Kelpie/Pit Bull mixes).
Related Articles: The Academy: The First Riddle
Share
Tweet
Share
Submit