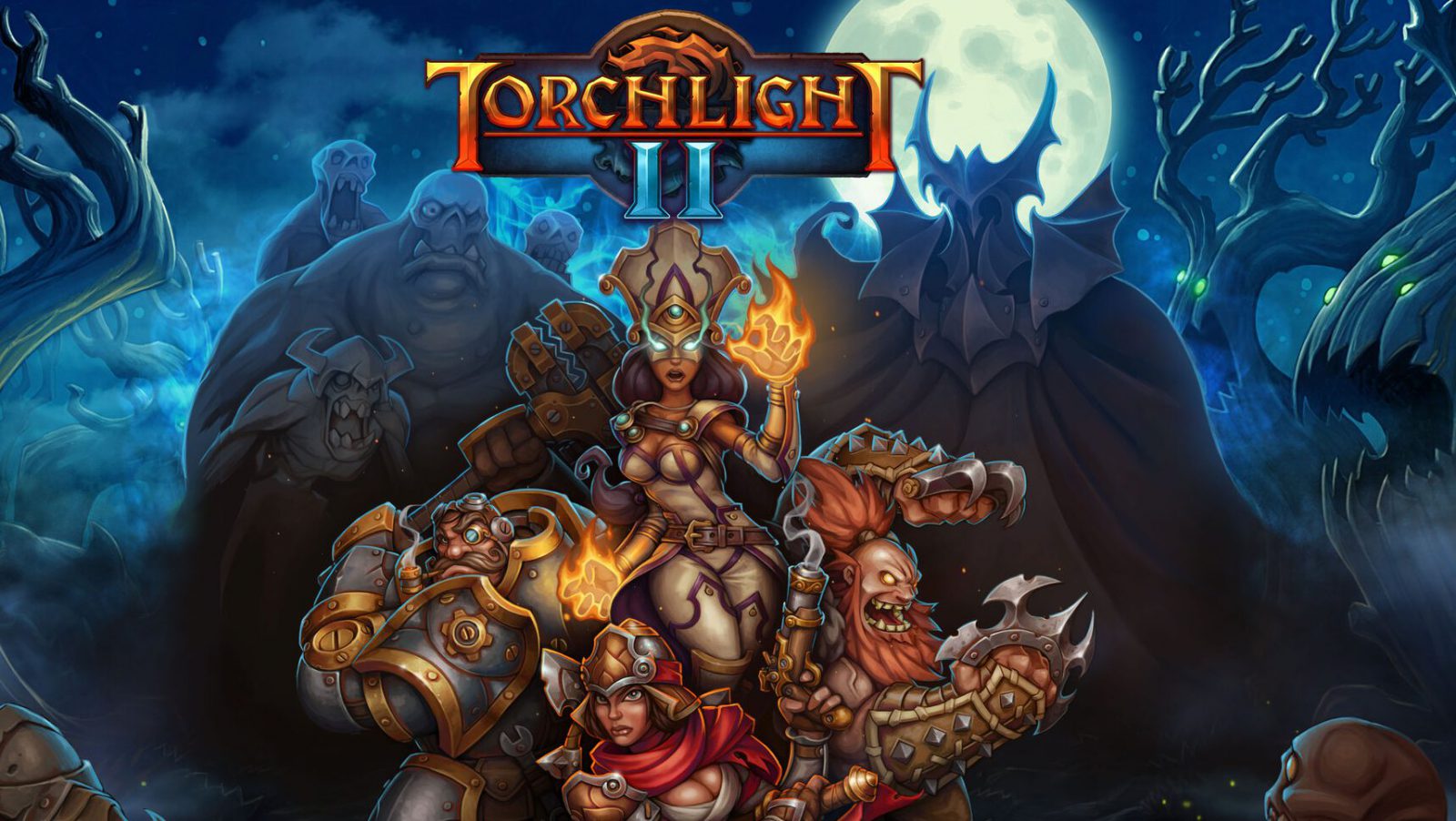 Dungeon crawlers are nothing new in gaming, but only the best tend to stand the test of time, as it takes more than an open world and myriad of advancing enemies to keep players coming back to a familiar world. Torchlight II is a game that has proven that, in a genre full of copycats and clones, it holds the crown.  I have spent countless hours playing dungeon crawlers, but none can hold a candle to Torchlight II.  With its abundance of loot to collect, open world level design, multi-tiered character leveling system, and its ability to make the player feel like they are an integral part of the gameplay, it only makes sense that this iconic game makes its way to the Nintendo Switch.

Torchlight II is back, and its torch continues to burn bright on every platform it releases on.  With its release on the Nintendo Switch, the game has never felt more at home. If this is your first-time playing, you are going to be amazed at the level of graphical detail, gameplay attention, and dedication this game invests in its dungeon-crawling world on a new platform.

Torchlight II is a fast-paced, monster crushing, dungeon-crawling action-RPG that’s filled with secret locations, countless enemies, plenty of side quests, and loot around every corridor, dungeon, hillside, and mystical location.  With hordes of monsters chomping at the bit to sink their teeth and claws into your customized character, you’ll undoubtedly use every magical skill and bone-breaking weapon to destroy them.

Much care has gone into the release onto the Switch.  You’ll be able to play solo, take part in an online multiplayer mode (which requires the Nintendo online membership), or a local co-op mode. The Switch version of the game feels natural and easy to pick up.  Playing in handheld mode, I was able to squeak out roughly four hours of playtime, and that’s with the screen’s brightness turned all the way up and playing outside.

The controls are tight and offer good feedback when fighting mobs of monsters, sorting through the many submenus, and searching the many, many locations for treasure. Taking advantage of the Switch’s form factor, the developers, Runic Games and Panic Button, have made skill binding and upgrading as easy as possible. You can even detach the joycons and play in the most comfortable ways possible without feeling at a disadvantage.

Upon starting the game, I arrived at the class selection and customization screen where I customized my character.  Yes, I know, we’ve seen customization in other games, but Torchlight II makes the choices simple.  There are four classes to choose from: the Embermage, Berserker, Engineer, and Outlander.  Each with their own set of skills and attributes, you’ll still be able to add on your finishing touches to whichever class you choose by equipping armor and adding mods to them.  To begin my first playthrough, I chose and customized the Embermage, trained in the arcane arts and capable of turning the biggest monsters into piles of ash. 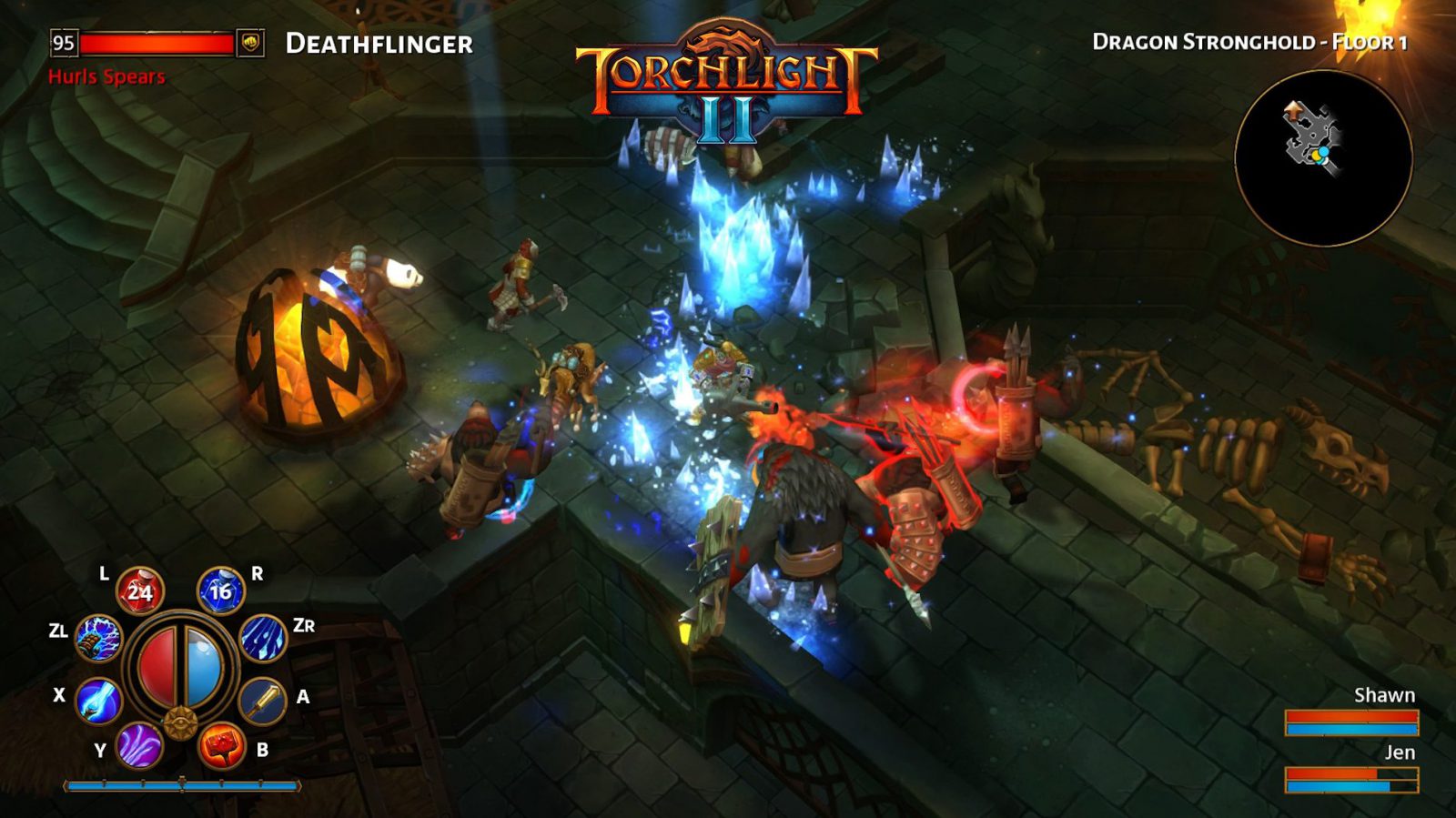 With only being able to customize my character’s gender, face, and hair, I was a bit underwhelmed, but it’s not about looks, but about loot and functionality.  The customization doesn’t end with character creation. What’s interesting about Torchlight II is that you’ll also have a pet that will aid you in your quest of looting bountiful chests and busting down the toughest of monsters.  In my Switch version, I had the option of choosing the unicorn as a special pet (exclusive to the Switch), and who doesn’t love mystical unicorns.

The pet not only acts as a second form of inventory to carry your sweet, sweet loot, but can make runs to town to discard of unwanted inventory items. But don’t mistake this unicorn for a mule, it can also attack enemies that threaten your mission to find all the treasure you can.  This helps even the odds as you will always be outnumbered. Bet your parakeet can’t do that. With sixteen pets to choose from and customize, Torchlight II offers more than ever.

Like many dungeon crawlers, there’s not much story to follow here. But there are plenty of lands to explore, treasures to find, weapons to find and mod, and skills to level-up that will fill that void. Plus, we’d all rather destroy monsters than listen to some voiceover telling us their life’s story.  As I wandered around the open world, I noticed how natural and beautiful the levels are detailed. With hills and mountain ranges hiding and offering an advantage for the enemy forces to flank you, the game always seems to keep you on your toes. I came across NPC’s in need of my assistance, offering armor, weapons, and gold as rewards. 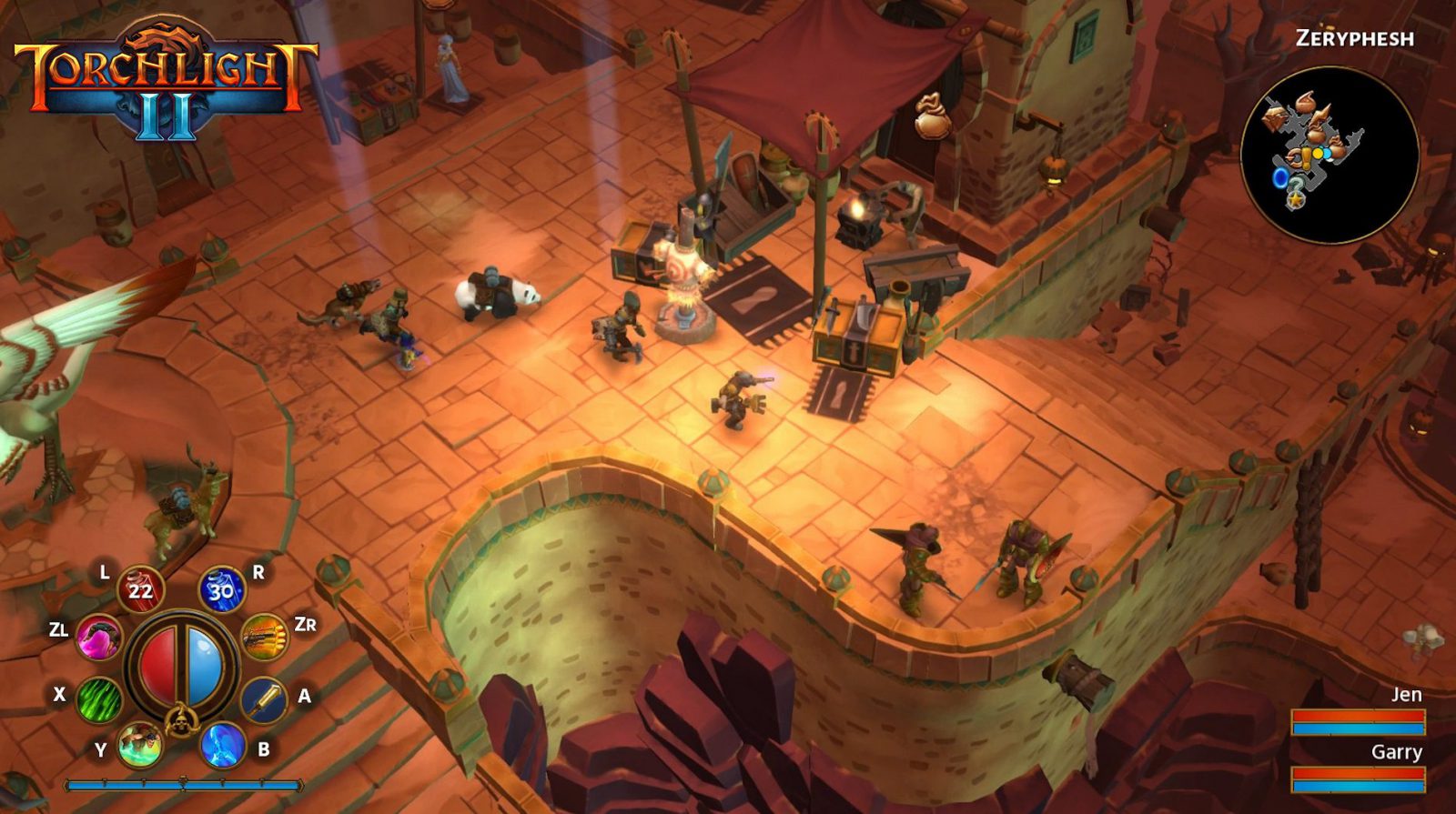 Within the first hour of gameplay, you get a taste of how much time was spent crafting, quests, designing levels, developing enemies of different varieties, and creating a skill systems that never gets old.  With side quests scattered around the world, it’s easy to find yourself wandering off the beaten path, but that’s where this game is at its best. The mini-map shows areas that I’ve yet to explore as I wandered across unknown regions.  The open worlds never felt empty and boring as enemies and treasures were awaiting my discovery at every turn.

Upon leveling up my Embermage, equipping armor and weapons, and binding many of my skills to the Switch’s buttons, I was knee-deep in hacking and slashing enemies that attacked in droves.  The Switch’s default button layout made dispersing enemies a simple task. With magic, fire, and lightning burning down and turning enemies into forgotten memories, I was pleased with Torchlight II’s performance on the Switch.  With me easily being outnumbered, watching my health and mana was vital to staying alive.

Using magic skills deplete my mana with every use, and with the number of different enemies attacking in waves and with different powers at once, I used my mana skills a lot.  Managing inventory and stat balance is an important game mechanic in Torchlight II. It’s critical to be aware of weapon levels, armor levels, skill points, and character stats, as these are all part of surviving the open worlds.  At a glance, it all felt a bit overwhelming, but it became familiar the more I played. 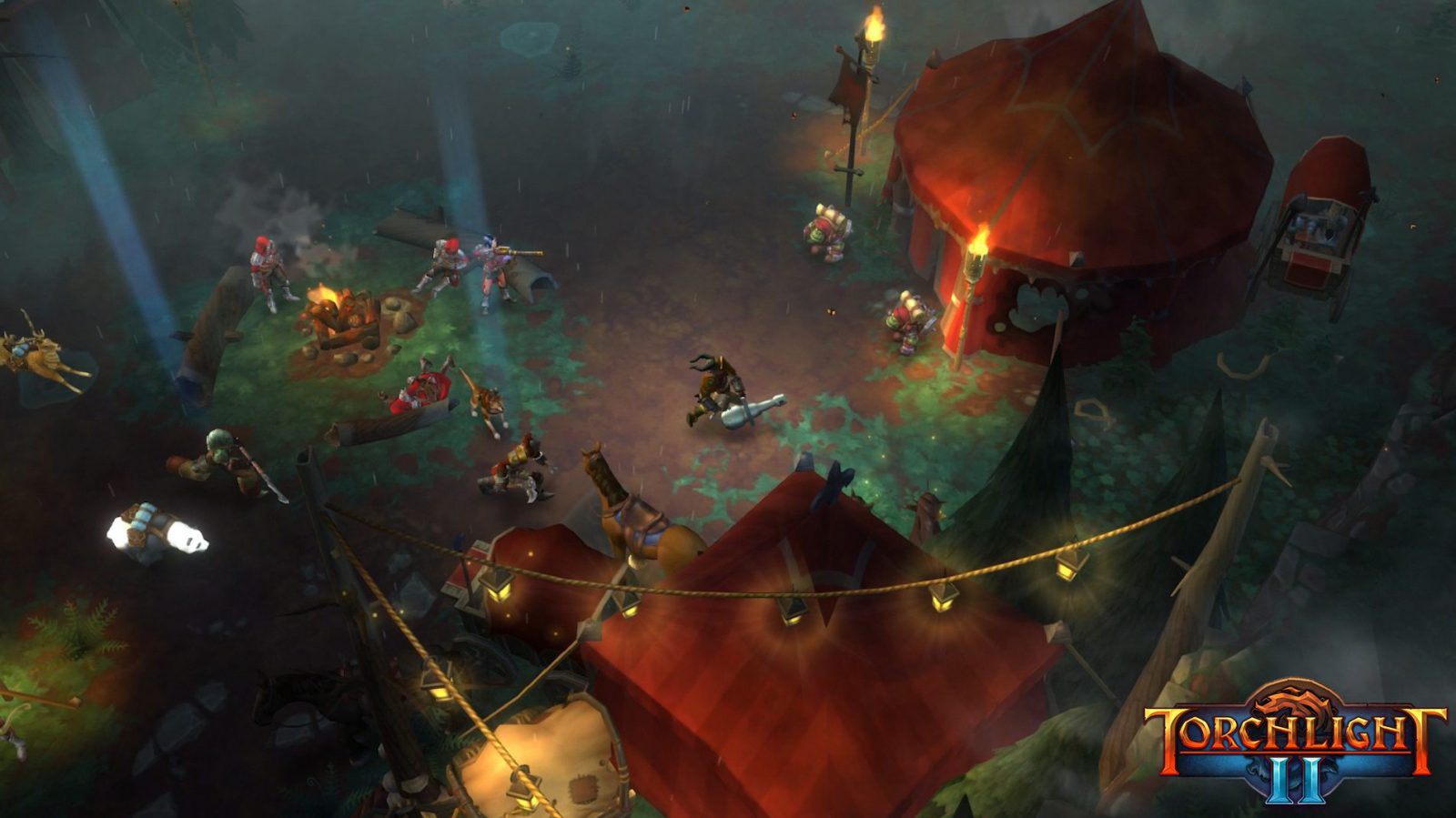 As I defeated enemies and searched the open world, I gained stat points that allowed me to level up my character. As I became familiar with stat system, I found it necessary to upgrade my dexterity, vitality, strength, and focus. If you want to hit hard, live longer, do more damage, and instill fear in the enemy’s heart, take note. Each of these are essential in surviving the many treacherous monsters, traps, and open-world dangers.

Depending on which class you’ve chosen, you will naturally have a higher stat level of one of the four when you begin, but you will always have the opportunity to upgrade them all.  It didn’t take long for me to begin leveling up and feeling as if I could crush anything in my path, but the enemies I encountered always felt challenging. Fighting monsters larger than trees, I mounted offenses that would make General Patton jealous.

Smashing enemies with my left and right-handed weapons, throwing lightning bolts, burning down the biggest foes, and stopping the most devious enemies in their tracks with my ice shards, I was an unrelenting force to deal with, and that’s what Torchlight II does so well.  It makes you feel as if your accomplishments matter. I never felt as if the gameplay became stagnant or tedious.  There’s a synonymous balance between the game’s difficulty, abilities, progression, and the core mechanics that creates that need to always come back and play more. 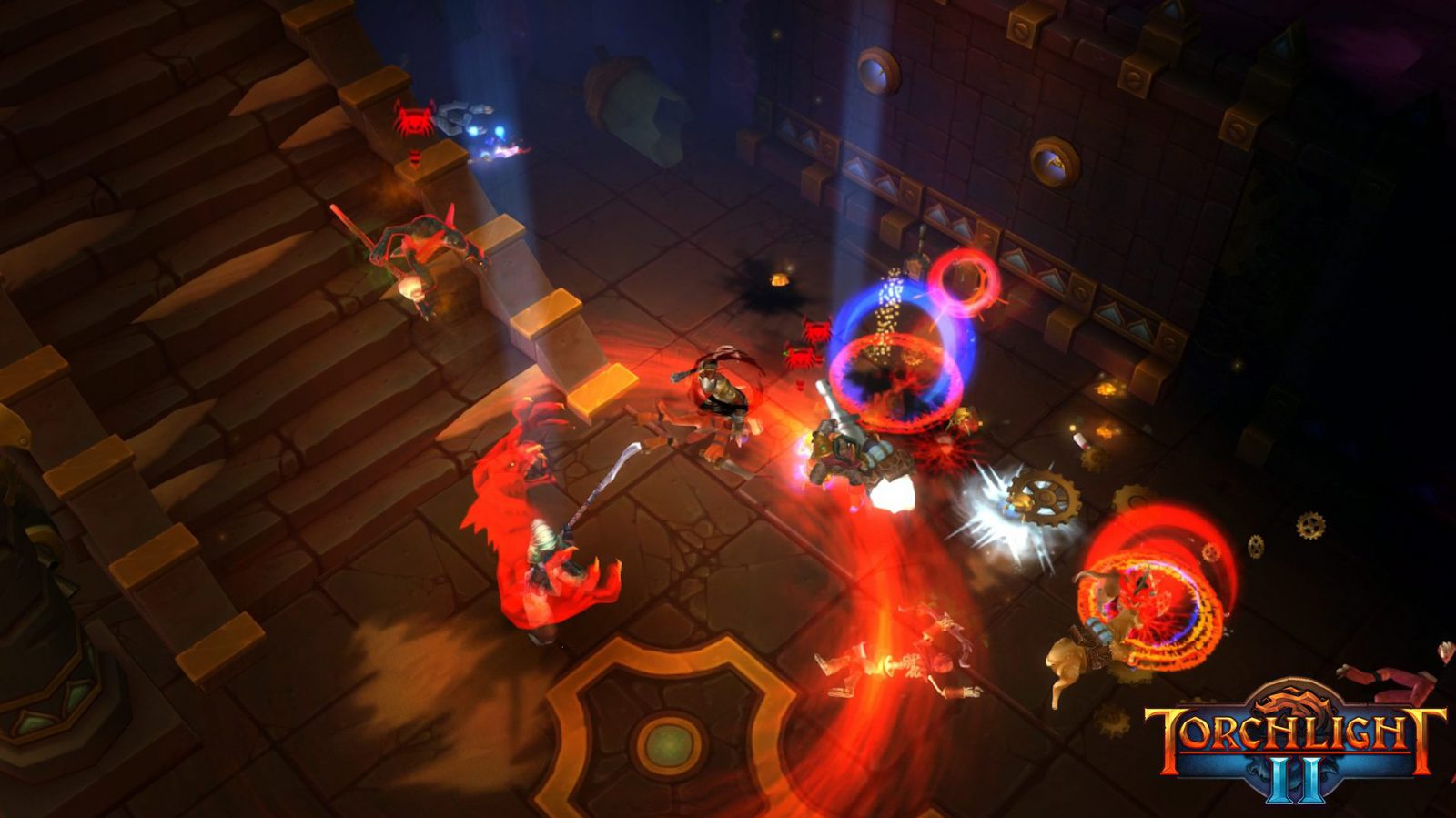 Leveling up never felt so good

What’s most alluring about the Switch’s version was that I never felt like its hardware caused me to have less of an experience.  There was the occasional FPS drop when a lot of enemies and explosions occurred on the screen, but it never hindered the overall game experience.  With explorative levels, beautiful graphics and lighting, and deep dungeon-crawling mechanics, I was amazed at the level of detail and performance Runic Games and Panic Button were able to squeeze from the Switch.

I did have some issues in the stat menu, where my selection did not refresh to indicate which selection I chose. I would select a stat, but the description would never change. I have been made aware that there will be a patch releasing soon after the game launches to address some known bugs.

Torchlight II on the Nintendo Switch is not just a re-release of an established game, but it takes full advantage of this transformer-like platform. Its ability to utilize all the Switch’s hardware to make the game more appealing was achieved, without cutting corners or gameplay experience. Offering hours and hours of single or multiplayer monster demolishing gameplay, Torchlight II is everything it was when it first debuted, and more. Torchlight II will release on September 3rd, 2019 on the Nintendo Switch, Xbox One, and PlayStation 4.

T.K. is a freelance writer, narrative designer, and author. Writing and developing narratives and giving voices to digital world and characters is his passion. As a game writer, QA game analyst, and editor for Gaming Trend, he enjoys being a part of the gaming industry.
Related Articles: Let's Play, Torchlight II
Share
Tweet
Share
Submit