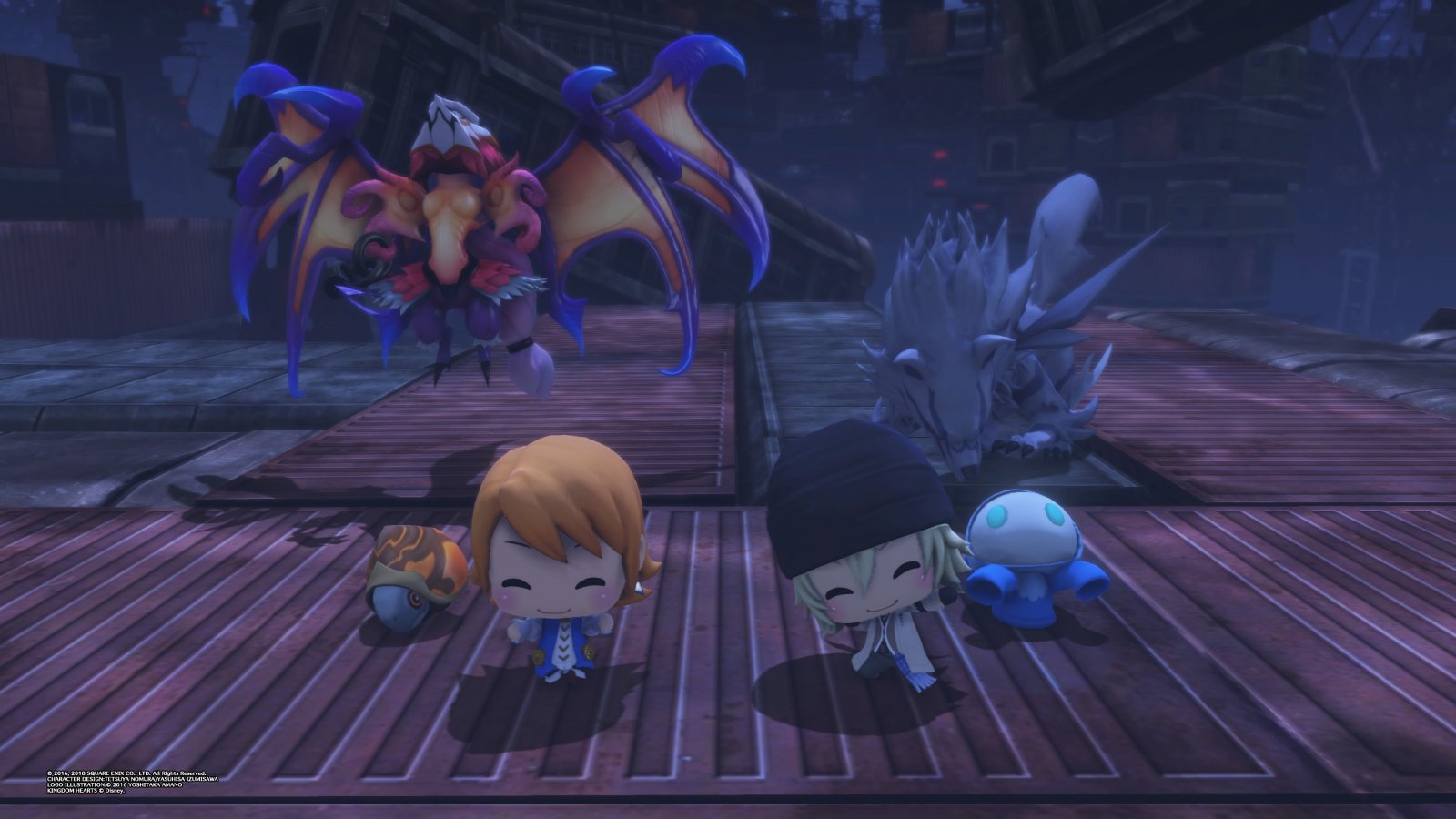 I’ve never been quite so conflicted about a game as with World of Final Fantasy. On one hand, collecting and leveling up your Pokemon (dang it, I mean Mirages) is endlessly satisfying. I had a blast seeking out and evolving (Shoot! transfiguring) these monsters into classic Final Fantasy creatures. Capturing them in your Pokeballs, I mean prismariums (ok, that one was on purpose) is often a fun puzzle within the battles that never grew old. On the other hand, the story and characters are some of the worst I’ve seen in years.

So right up front, I’d like to mention that your constant companion, Tama, is possibly the worst character in any game I’ve ever played. I know a statement like that sounds exaggerated and inflammatory, but I was genuinely upset every single time she spoke. She is a character that–like much of the game–is designed to be cute, with bows under her ears and a crown and stars on her tail. That by itself isn’t a problem; I can handle cute. In fact, much of this game’s charm is in its chibi characters and adorable representations of fearsome monsters like Ifrit or Behemoth. What sets this character apart as especially egregious is her strange verbal affectation. She insists on saying “the” before a lot of her words that becomes the-annoying pretty the-much immediately. If that doesn’t sound like a big deal to you, then you are probably also the type of person who doesn’t mind listening to a moogle incessantly say “kupo,” in which case you can probably ignore this complaint.

My specific gripe with Tama aside, the game’s story, while admirably attempting to form a cohesive narrative around an inherently messy setup, seems to fall into the same trap as Kingdom Hearts. They’ve taken the silly premise wherein characters from all of Final Fantasy’s many games exist in one universe and wrapped it in a convoluted story that is needlessly complicated. It feels like the classic Square Enix problem where they simply give more story instead of bothering to write a good one. Fortunately, during battles or cutscenes you can hold down R1 to fast-forward the action, so I had that pressed for the large majority of my time with the game.

The story was ultimately just an excuse to sightsee through classic Final Fantasy haunts like Besaid or Midgar. What compounds my conflicting attitude towards this game is that, as a turn-based RPG, the battles were almost never actually engaging or challenging. You always have twelve MP to use your magic and this just regenerates a bit every turn, so many battles just devolved into using a magic that the boss was weak to, and then using attack over and over until you had replenished enough MP to use more magic. It has many of the trappings of a standard Final Fantasy with a full suite of buffs and debuffs, but using them was usually just to spice things up rather than as legitimate or useful strategy. Some post-game battles required more attention, but ultimately just needed a bit more grinding or substituted a huge HP pool for an actually challenging fight.

That’s not to say there isn’t depth in the mechanics, because there is, it’s just that it often felt underutilized in combat. Battle setups involve your two main characters Lann and Reynn in either their Jiant or Lilikin (regular human shape or chibi) forms and two of your mirages per character. They then awkwardly stack on top of each other according to their respective sizes of large, medium, and small. Your stack setups are important because while stacked they access new combined abilities, so if two of your fighters have the fire spell, then the stack will gain access to the stronger Fira. There are countless combinations like this that makes mixing and matching fun and interesting throughout.

You have the ability to unstack and fight individually as well, but you are much weaker alone than you are as a stack, so there was never an actual strategic reason to do this. Because enemies can also be stacked, you usually just want to try and hit them with the right moves to topple their stack and take out the enemies individually. This holds true for your team as well, so it was more of a punishment than anything. But like with many of the different mechanics, it was only really used interestingly in imprisming monsters.

Importantly, as I alluded to earlier, this game takes heavy inspiration from Pokemon; all of your monster teammates are captured in a style that is almost uncomfortably close to a Pokemon game down to the ball shaking three times before you tame it. It has some differences that set it apart and actually make the overall game much more enjoyable. To capture the critters, you need to create a “prismtunity” which is different from one mirage to the next. It might require you to hit them with a specific type of magic, heal them, or inflict a specific status condition. It required much more extensive use of my different abilities and my stable of mirages to find the right way to approach these situations. This puzzle-like element to the game is what kept me going to the end and was a joy that nearly overshadows much of what holds this game back.

I even had fun leveling up all of my mirages. Each mirage has a skill tree that might let you transfigure them into a bigger and stronger version, like the small Chocochick could become the medium-sized Chocobo for example. Crucially, you can switch back and forth between these variants at will while keeping any stat bonuses in case you prefer the smaller version for your stack. At first the game seemed like a shameless rip-off of Pokemon (and it still is), but they take the familiar monster catching formula and add enough on top of it to make it feel unique.

The main loop of the game involves you moving from town to town doing simple quests for the townspeople before heading into a dungeon and catching monsters there. The towns and dungeons were always visually interesting, but there were a few too many instances of dungeons that felt like I was slowly trudging through endless corridors that did nothing but pad the length of the dungeon only to facilitate a better sense of scale. It’s not the end of the world, but I do wish they had done more to make them more interesting.

Now if you’ve already played through this game when it released on PS4 or Vita in 2016, the new releases on Xbox and Switch bring with it this Maxima add-on content. The difference though is good if slight. It adds very little in the way of new content, save a few new mirages to encounter and some new summons. There are some new bosses to fight post-game and adds a new cutscene that *gasp* leaves the door open for a sequel. It also offers some small quality of life changes (like the ability to hold twelve mirages instead of ten) that are certainly nice, but hardly seem worth the price of admission for returning players. It should be said that nothing they added in any way detracts from the experience and only builds on top of it, but you just shouldn’t expect a large new chunk of story content.

World of Final Fantasy Maxima exists in this strange place where I recognize around every turn that they are shamelessly lifting from Pokemon and has a story that is needlessly complicated at best and downright annoying at worst, but despite all of those glaring flaws, I can’t wait to return to catch the mirages I missed. It is pure fan service that I gladly indulged in. There was a certain pure sense of joy in getting to see chibi versions of Lightning, Eiko, and Quistis interact with each other. It plucked at my nostalgia heartstrings in all the ways that Kingdom Hearts has always failed to do for me while also successfully exploiting my love of Pokemon-style monster collecting. It might just be that my particular video game disorders are being perfectly capitalized on here that allow me to overlook what is otherwise a mediocre game, but I can’t help but come back for more.

World of Final Fantasy Maxima is by no means perfect (it, in fact, has many notable flaws) but I had a fun time indulging in my love of Final Fantasy and with a Pokemon twist. This new Maxima add-on only makes the overall experience better, but is a fairly light package for anyone that played the base game already. If you were champing at the bit for any new content, then this gives players some new monsters to collect, but it ultimately is more additive than transformative.

Nathan lives in Colorado catching Pokemon on the Go and at home. He previously spent three months interning for Game Informer before coming back to Gaming Trend to spread the good word on video games. His real passion, though, is collecting different versions of the 3DS and other weird Nintendo garbage. It's a never-ending quest for less space in his house.
Related Articles: WORLD OF FINAL FANTASY MAXIMA
Share
Tweet
Share
Submit