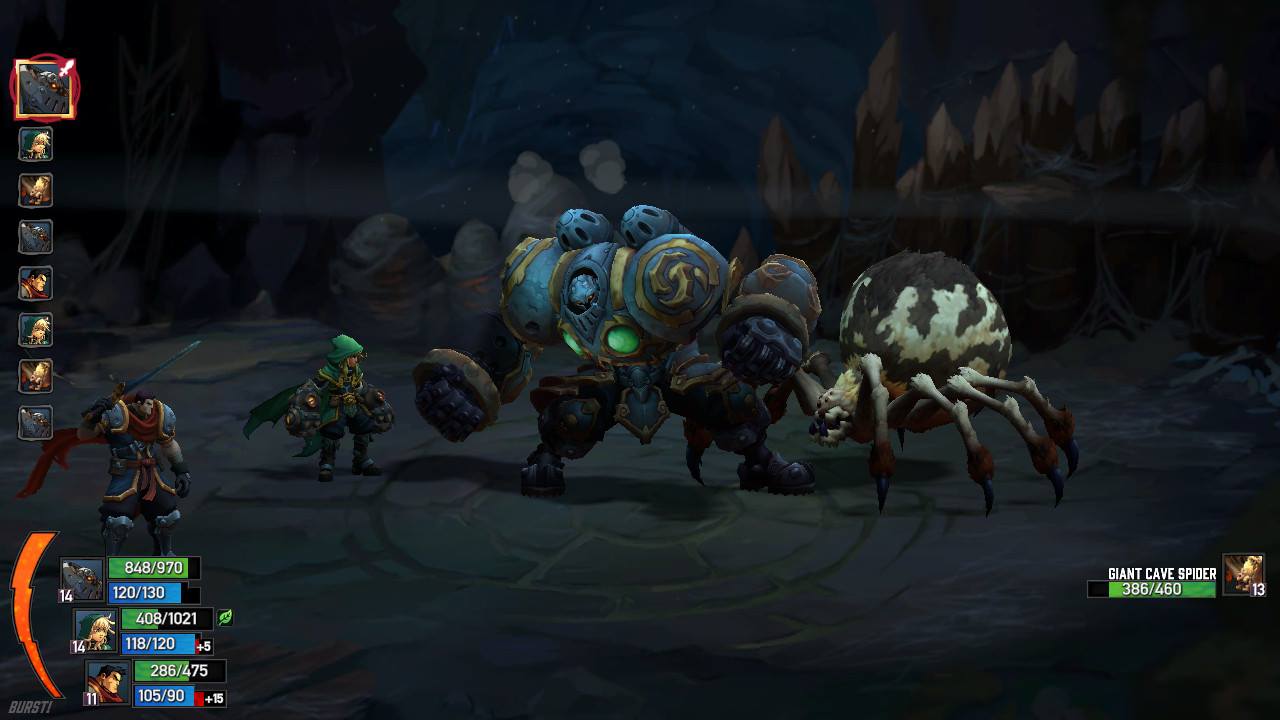 It’s no secret that I’m a big fan of Battle Chasers, both in game and comic form. While I was excited to sing the praises of the Battle Chasers: Nightwar PC release in October of last year, I did so while harboring a no small bit of disappointment that the Switch release was beyond my grasp. Fans waited eagerly month after month slipped away without the announcement of a Switch release date, like evenings spent by the fireside at the Harm’s Way Inn. The wait is finally over and, at last, Battle Chasers: Nightwar has arrived on the Switch… and it is glorious.

One of my biggest gripes about the original release was how much grinding was necessary, especially early on. I generally don’t mind grinding; I actually quite enjoy the occasional battle-binge in order to power up my crew, but I felt this game initially took it a bit too far. After defeating a dungeon, I’d head back to town to heal up, then, instead of heading to the next story point, I’d immediately head right back to that same dungeon and beat it again, maybe even twice more, just so I could be strong enough to survive wherever I was supposed to head next. Replaying dungeons may be an important and valuable part of the game, but I felt that the constant need to immediately backtrack disrupted the flow of the game and story.

Fortunately, the crew at Airship Syndicate has since tweaked and rebalanced the game, and the Switch release comes preloaded with all these updates. I was able to fly through the first four dungeons before I felt the need to grind a few levels out, making it that much easier to get lost in the world of our heroes. Of course, I found that I minded having to do the small amount of grinding the rebalance required even less now that I had the luxury of playing the game on the go. There’s nothing like having the luxury pulling my Switch and picking a fight whenever I have a few minutes to spare.

This is a world that is both world is both impressively large and quite beautiful. Backgrounds and 3D models are given a softer, painterly feel, while the overworld is laid out like a hand-drawn map, complete with hash mark shading. I was worried that the Switch’s smaller screen might devour some of the more delicate details of the art, but that concern proved to be entirely unfounded; the game looks both crisp and soft in all the right places, looking just as refined and atmospheric as it did on my computer screen.

The game does make use of smaller text in some areas, such as the journals scattered throughout dungeons, the smaller screen size can make these something of a challenge to read. Fortunately, this smaller font size is generally restricted to flavor text, and I never found it to be prohibitively difficult. If your eyes just aren’t what they used to be, and you really want to soak up every single, lovingly placed letter of the impressively robust lore books scattered throughout dungeons, you may want to consider playing this docked. The controls all feel solid and responsive, both in and out of docked mode, though if I’m really looking for something to complain about, I felt like the left thumbstick was a little loose, and that characters sometimes kept moving longer than they should have on the overworld map.

If there’s one drawback to picking up Battle Chasers: Nightwar on the Switch, it’s the load times. The Switch simply lacks the horsepower of dedicated consoles, and, as a result, battles take noticeably, though not prohibitively, longer to load. The game does suffer the occasional framerate lag, so if you’re the kind who can’t handle anything less than buttery smooth 60FPS gameplay… what are you even doing with a Switch, anyway? The load times are quite similar to those in South Park: The Fractured but Whole, so this is clearly a limitation of the hardware, not the result of a faulty port; it’s simply the price we’re going to pay to game on the go until the hardware itself evolves.

Once loaded, combat is a thing of beauty. Each character and skill has their own, unique animation, different characters synergize with each other, making team composition more than just shortlisting your favorite heroes, and the overdrive mechanic, which creates temporary mana that expires at the end of each battle, encourages you to play around with different skills and abilities, rather than saving everything except your basic attacks for bosses. The Burst system unlocks special, powerful, cinematic, limit break-style abilities once the team has soaked up enough damage, but beware: many bosses have their own Burst moves, and they can be devastating. While entering commands is relatively quick and painless, you’re going to be fighting a lot of baddies which don’t present much of a challenge, so I still found myself yearning for some kind of auto-battle or quick battle system which would alleviate my having to manually enter every command.

The story stays true to the game’s comic book roots; the main plot is told through comic panels, though it’s spiced up with some lovely animation and stellar voice acting. You don’t need to be familiar with the original comic series to enjoy the story, as much of the history is summarized at the start of the game, but it certainly adds to the charm and interest of Gully and her rag-tag team. The plot itself is rather straightforward, and it can even feel a little lackluster at points, but there are a few stellar plot twists which await those who make it to the late game.

I found myself enjoying my return to the Crescent Isle more than I’d expected. I’d forgotten how much I love the soundtrack, and the story was far more engrossing and inviting without the need to constantly double back through dungeons to level my characters up. There’s so much to do, from fishing to upgrading gear, optional bosses, lore collections, a bestiary to complete, and even graves to rob; I’m happy to say that Battle Chasers: Nightwar is even better now than it was half a year ago, and is, in my humble opinion, one of the best modern turn based RPGs out there.

Battle Chasers: Nightwar is a true indie gem, a love letter to the JRPGs many of us grew up with, brimming with beautiful graphics, stellar music, quirky characters, and a whole lot of mysteries to uncover. While the Switch release suffers from some slower load times, the portability combined with rebalanced gameplay makes this a must play for those who love dungeons and the heroes who crawl through them.