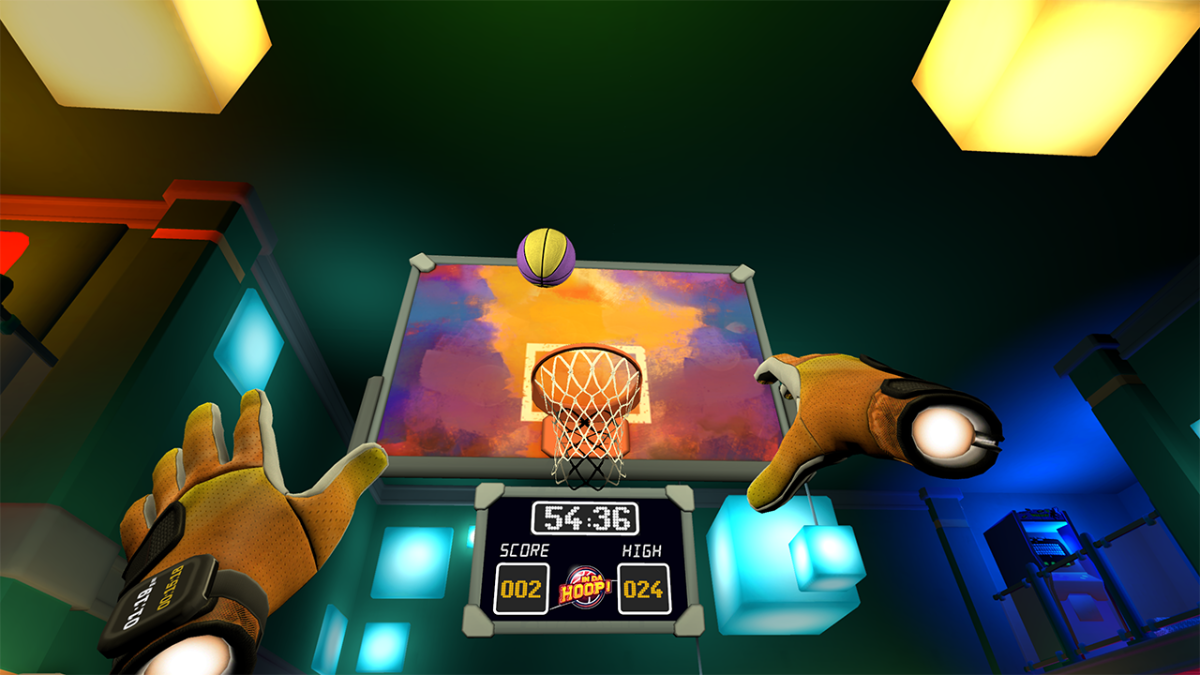 VR has certainly been an evolving medium that continues to impress. Even though we still aren’t as far into the future with technology as some of our favorite sci-fi shows like Star Trek or Battlestar Galactica, what is going on in these virtual worlds that are being built is incredible. It’s an amazing thing to wield a lightsaber, or fight off a zombie invasion, or guide an adorable mouse through puzzles! While some of these experiences are about capturing things you literally cannot do, there are plenty of VR games letting you do things you could probably go do right now. Some may joke that you should just go outside and throw a ball around, but VR is a delightful alternative that doesn’t get you nearly as sweaty, at least most of the time.

I think we’re probably a little ways off from full on basketball in VR, and I’m not even sure how one would make that work, but In Da Hoop by Realcast has gotten us at least to the arcade even if the full court may take some more time. At first I thought this one would be a simple “stand in front of the arcade machine and play”, but I was happily surprised at how much is in the package, even if it’s largely a one trick game. That, of course, doesn’t matter if you do your trick very well, and I’m having plenty of fun with what is there.

Let’s start with the experience itself. Logging in leaves you a bit disoriented, opening with you in a loft in what seems to be a virtual arcade bar. It took me a second to figure it out, but looking around I saw an arcade system on my left, asking me to put my hands on a panel to start. After getting things going, what was really interesting is the game’s reliance on simple motions instead of buttons. You don’t use the Quest 2’s controllers to grip, press buttons for commands, or the analog sticks for moving a cursor. I don’t mind it for gameplay, but I do feel like it was a missed opportunity for making menu choices via the arcade machine. 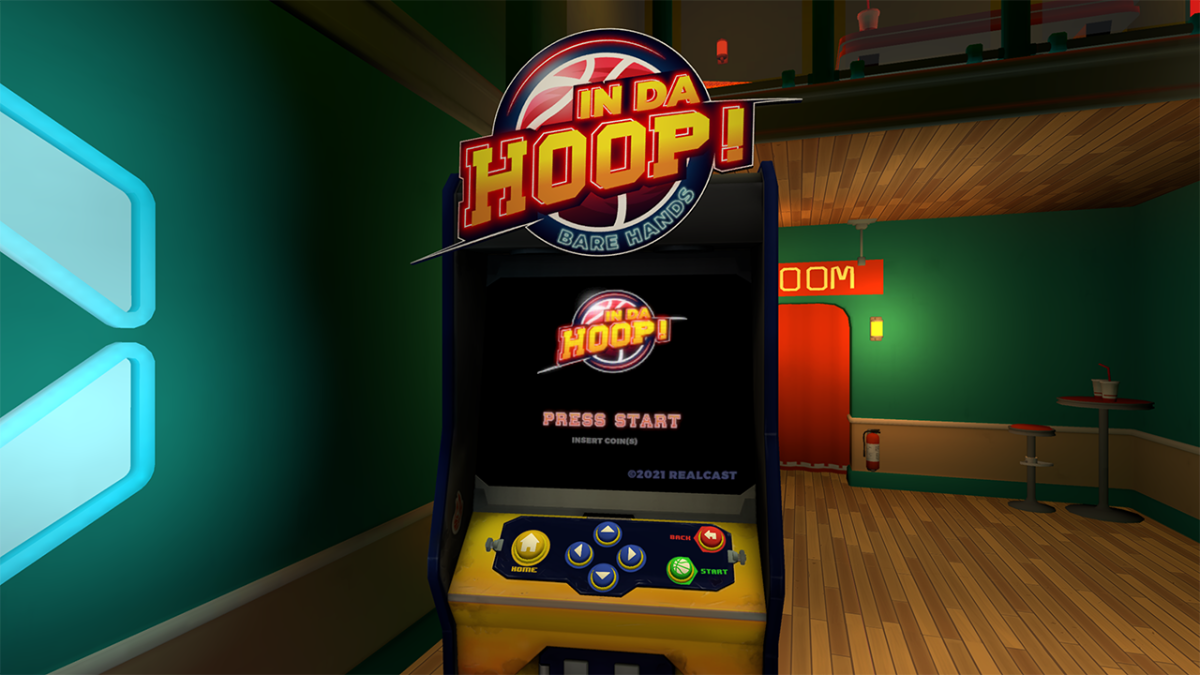 This brings us to the arcade machine. This is your hub where you make all your in-game choices of what to play, and it starts with training missions to unlock literally everything. I’m a bit surprised at the decision, as you can’t do any quickplay, but it doesn’t hamper the experience and gives you an opportunity to learn. I do wish there would have been a bit more of a guided tutorial at the beginning so I wouldn’t have felt like I was going in blind, but it’s easy enough to figure out as you go along. The opening has you moving and stacking dice to get used to the grabbing movement, so I wasn’t even sure I was in the correct game! But it didn’t take long before I was picking up basketballs and throwing them on the arcade machine.

Now, what you probably care about more than just the start is how the game actually feels. There are two options to play, with the Oculus Quest 2 controllers or with hand tracking. The coolest thing is that both are legitimate options, and while they don’t necessarily hit the mark perfectly with the tracking, it does work well. Using the controllers, the virtual hands are stiff but it doesn’t feel any more awkward than other games, besides not being able to press a button to close your hands to a grip. 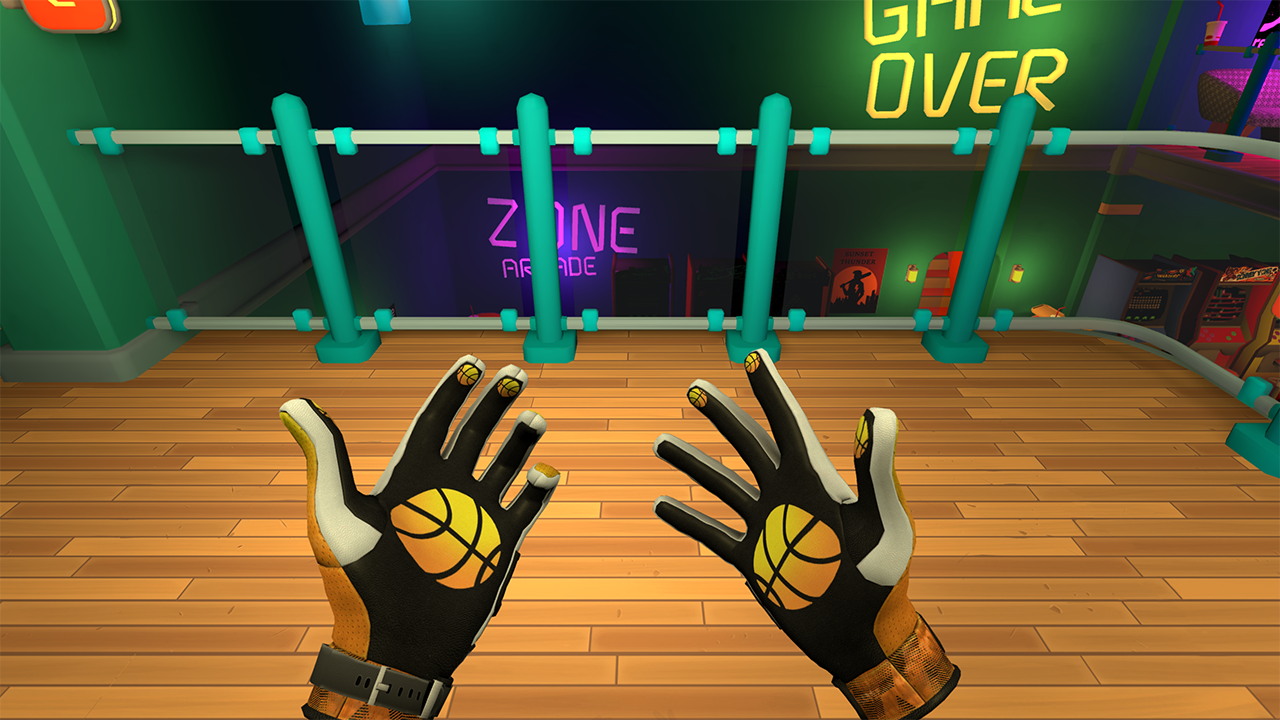 The hand tracking is probably one of the most impressive things about In Da Hoop, with a pretty decent one to one movement when moving your fingers. It works pretty well, but I can’t say it’s perfect; the tracking isn’t always on point since you’re guessing sometimes on how to hold your hands when picking something up. While this does a good job of simulating what it would feel like grabbing a basketball, I do like the controllers just a tad better. This falls down to them having an actual heft, so when you shoot there’s a tangible weight, but also the utilization of haptic feedback that simulates grabbing an object.

As for the actual gameplay: you shoot a basketball. It doesn’t really get much simpler than that, but Realcast does make it fun. There are quite a few different modes you discover during the training, and there’s actually a reason to go back with a 3 star ranking system reminiscent of a mobile game like Angry Birds (although I never knew you needed to 2 star each one to unlock it in Quickplay). It can be as elementary as dropping the ball in a hoop literally next to you, or as tough as shooting at a backboardless hoop for a nothing but net shot, but it’s a nice mix of different things. I think my favorite ones involve shooting towards a “virtual” real life specs hoop, which I didn’t expect to play around as much in the game. It does seem like the game may have launched a little prematurely, as there are a few greyed out modes and online play is absent for now (although online leaderboards allow you to compete with friends to a degree), but it does seem like Realcast plans to do their best to make good on your investment.

While it only has largely one trick, that trick is a lot of fun. In Da Hoop isn't going to wow you with insane graphics or revolutionize the VR scene, but Realcast has built something that is very enjoyable. The tracking that's been designed works very well with controllers, and is quite competent with hands tracking, even if it isn't the best way to experience the game. With a few upcoming updates this is bound to continue to be a great experience for anyone wanting to shoot a few hoops.

David Burdette is a gamer/writer/content creator from TN and Lead Editor for Gaming Trend. He loves Playstation, Star Wars, Marvel, and many other fandoms. He also plays way too much Call Of Duty. You can chat with him on Twitter @SplitEnd89.
Related Articles: In Da Hoop!
Share
Tweet
Share
Submit