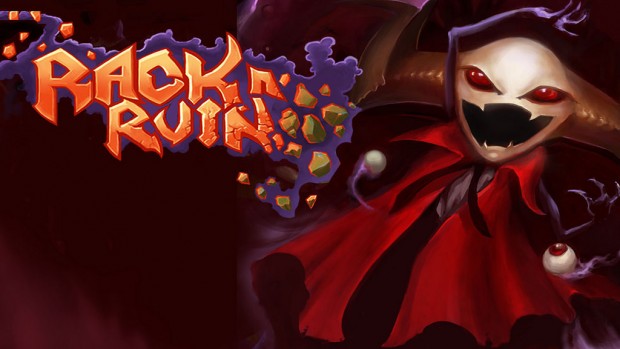 Rack N Ruin is similar to The Legend of Zelda in many ways.  There’s plenty of action, encouragement for exploration, and emphasis on puzzle solving, much like Nintendo’s classic.  There are even some truly engaging “dungeons” to conquer along the way.  But there is one key difference that makes Rack N Ruin drastically different from Zelda: you play as the villain.

Rack N Ruin casts players as Rack, an evil demon who is sent down to an innocent planet in hopes of ravaging it and enslaving its inhabitants in the name of his master, Ruin, the lord of darkness.  Rack’s journey will take him throughout the land, conquering each area one-by-one until the world belongs to Ruin.

Right from the start, the concept of playing as a villain is a unique and clever concept for the adventure genre.  Being evil brings about a refreshing twist to the tried-and-true formula.  Unlike Zelda’s Link who visits dungeons in hopes of saving the land, Rack’s quest has him conquering each dungeon in order to destroy the nearby landscape.  Meanwhile, similar side quests are given out by NPCs in the same way players are familiar with, but rather than helping, Rack will do harm.  For example, while a normal fetch quest involves finding a lost item for someone, Rack might destroy the item altogether, thus finishing the quest from an evil perspective.  The quests that you’ll go on are roughly the same as other adventure games, but the evil twist provides an entertaining perspective.

Aesthetically, Rack N Ruin is quite beautiful as well.  There’s a fun color palette to the game and the bright visuals really pop, even though the happy vistas become a wasteland after each land is destroyed.  The art style is reminiscent of a watercolor painting, which fits surprisingly well for a game of this type.  It’s just a shame that in the latter half of the game, the beauty isn’t so abundant.

Unfortunately, the rest of the game feels a little uneven.  For starters, the puzzles range from brilliantly clever to bemoaning simplicity.  The smarter puzzles will have Rack channeling electricity through circuits, or rotating a room to find hidden passages, for example.  These types of puzzles are enjoyable and make you see hints of some deep puzzle design.  The next room, however, might then be solvable by nothing more than a well-placed object atop of a switch.  There are moments of genius here, but when the game struggles with its consistency, some of the appreciation is admittedly lost.

Combat, meanwhile, is easily the most frustrating aspect of the game.  At the start of the game, Rack has nothing but fireballs at his disposal, which can be fired in the direction that he’s facing by pressing the X button.  Players can also lock onto enemies by pressing the L button, but I can’t help but wish that Rack N Ruin featured a control scheme that was a little more agile for aiming in better directions, such as that of a twin-stick shooter.

Making the situation far worse is the abundance of enemies.  Each area is packed to the gills with foes, and rarely can an enemy be defeated with a single hit.  Enemies will even chase you once you get too close or open fire, making progression an exhausting task.  Most battles consist of getting close enough to fire upon enemies, then continuing to back away and fire as they grow closer, only to do it again moments later for the other half dozen foes in the area.  The melee attack that Rack eventually earns doesn’t fare much better either.  Many enemies launch a barrage of firepower in all directions, making the concept of getting in close for a kill a nearly impossible task to pull off without health loss.  Couple all of this with the fact that the scenery will often obstruct the visuals in heavily forested areas, and the entire ordeal becomes a true test of one’s patience.

Another frustrating aspect comes from the lack of guidance that the game gives players.  Many of the game’s directions consist of nothing more than “head east” spoken by an NPC.  After heeding the vague directions, there are few, if any, clear instructions on how to progress amidst the branching pathways.  Making matters worse, if there was any way to recall where on the world map I was supposed to be headed, I could not find it.  This means that if I were to skip through a key moment of dialogue, I would be totally lost with no way of determining the general direction that I should be headed.

Combined with the poor combat, the ambiguity of directions is a nightmare, especially when such few checkpoints exist.  It was not uncommon to be sent back to a previous area after dying, forcing me to spend another ten minutes just to progress through an area all over again after enemies have respawned.  Throw in the fact that you’ll be dying frequently and there’s plenty of rage-inducing moments.

At first glance, Rack N Ruin seems to hit all the right notes.  It has an interesting concept, it looks beautiful, and it takes clear inspiration from one of gaming’s most beloved franchises.  What the game does right is far overshadowed by what it does wrong, though, and as a result, the game requires an extraordinary amount of patience.  It’s surprisingly deep at times, but ultimately Rack N Ruin falls short of its huge potential.

It doesn’t take a hideous demon to bring on destruction (the endless populations of pretty blonde killers in GTA Online proves that), but it certainly doesn’t hurt to have one either.  What hurts Rack N Ruin isn’t the main character, but how neutered the poor demon is.  Though the game leaves you wanting more, it remains a playable and fun experience.

Rack moves with the grace of a submarine in molasses, gliding slowly across the landscape.  Many of the safe zones between attacks are smaller than Rack is on the screen, and the slow and stodgy movement more often than not leads to death.  Enemy projectile attacks are easy to understand, but it is often easy to misread an enemy melee attack, which seem to make little sense.  An early enemy, a hulking knight with a large scimitar, swings at you with the same movement, and the times that the attack hits seems to be random.

Using a melee weapon yourself is a functional, but suicidal method of attacking, and the standard fireball spell that Rack uses is effective but unwieldy.  The game uses the analog stick to aim your ranged attacks, but it only shoots fireballs in the 8 D-Pad directions.  If you want to shoot an enemy or destroy a chest, you have to be perfectly in line with them in one of those 8 directions.  While the lock-on function for ranged attacks alleviates this some for attacking, using your attack to destroy chests, pots, and other on-screen loot holders is a time-consuming chore.

The design of this game is really pleasing, a well balanced mixture of modern clarity and old-school storybook imagery.  The look of the landscapes is all very cute and friendly, sort of a more vibrant “Velveteen Rabbit” meets 90’s Nickelodeon motif.  Rack himself is an ugly little character with little to like, but the enemies, townspeople, and other characters are all well designed and positive.

With all said and done, Rack N Ruin too often straddles the fence between innovative and cliche, and the frustrating gameplay only makes things worse.  However, the game has flashes of brilliance in between a litany of dull and over complicated moments, and ends up being fun despite all of the common issues you run into.  Rack N Ruin is a mediocre destruction frenzy that will likely only appeal to fans of classic top-down gaming.

Rack N Ruin has some clever concepts that ultimately fall short due to moments of extraordinary frustration.

Gaming Trend's resident amiibo collector, Matt's a lifelong gamer with a soft spot for Nintendo. As a new father, Matt often struggles to stay as involved as he has been in years past but can always be counted on to come back for some engaging geeky conversations. A resident of Philadelphia, he is currently working on building up his Man Cave with all things Marvel, Star Wars, and Video Games. As an old-school gamer, Matt firmly stands by his belief that gameplay will always be more appealing than story.
Related Articles: Rack N Ruin
Share
Tweet
Share
Submit