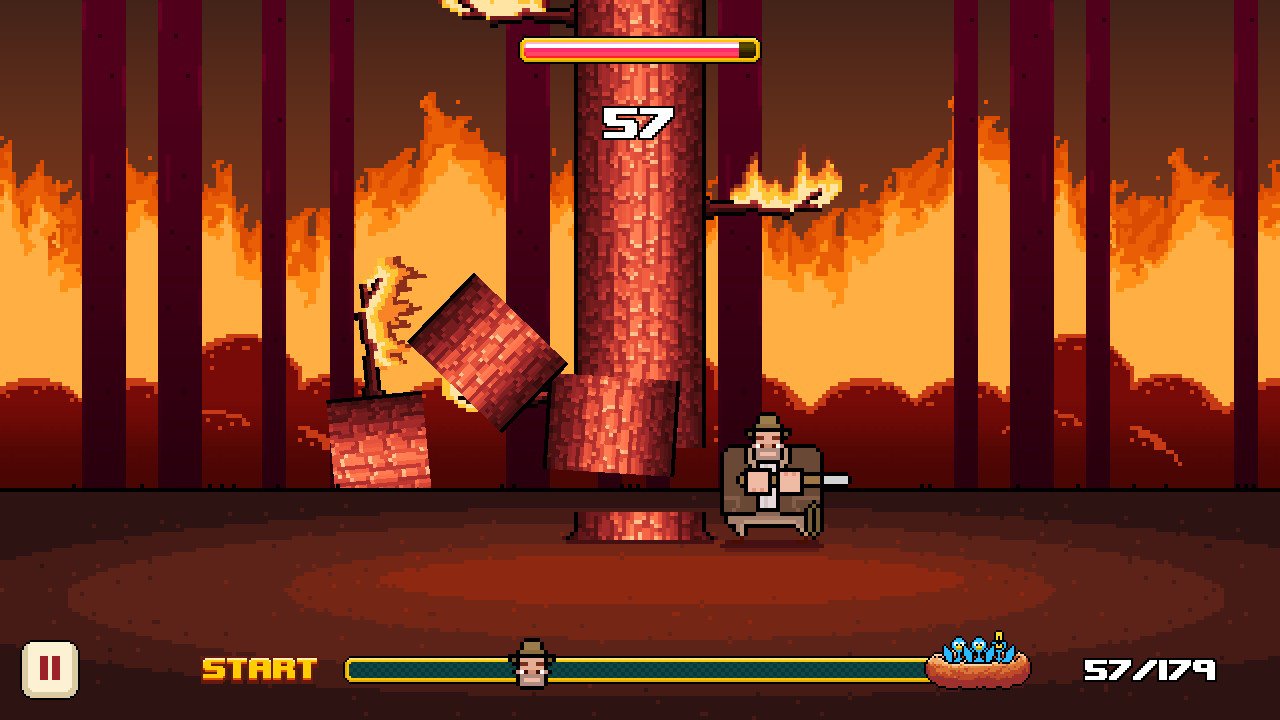 As much as I love spending hours on end playing Super Mario Odyssey or Pokken Tournament DX on my Switch, I love playing short, pick up and play games when I’m on the go. Superbeat: Xonic and Graceful Explosion Machine are my mainstays when I have a few minutes to kill, but I’m always looking for a quick game to enjoy when I have to wait a short while. The Switch has been getting some great (and cheap!) mobile ports as of late, and Timberman VS is just another entry in quick games worth your precious time.

The main gameplay in Timberman VS is simple, but the game nails the execution perfectly: As a lumberjack (or a variety of other characters), you must chop ‘til you drop in order to increase a timer above your head. However, you must be careful, because hitting a branch on the tree you’re chopping or running out of time will cause a game over. It’s a game of wits and hand-eye coordination as you’re trying to beat the clock while avoiding obstacles. That’s the gist of the game, and you’ll basically blow through a round in less than a minute, but it has the addictive little “one more round!” quality that demands you to keep going. In addition, you can unlock dozens of new characters by playing the game, so there’s some incentive to progress and get better at the game.

While it’s a fun little time waster on mobile devices, the Switch is perfect for this expanded port, as it takes advantage of the handheld mode very well. The controls work whether you’re on a single Joy-Con, a controller grip or even as a tablet (with touchscreen controls if you’re playing by yourself). It’s not a graphically demanding game, so it’s great that the pixel art style pops out and is fluid; it’s a lighthearted title that’s quick and pleasing to the eyes, and the unlockable character designs are idiosyncratic even if they’re functionally identical.

As you might have guessed from the title, Timberman VS does implement multiplayer in the game, which makes the $2 price tag worth it. While the classic mode from the original mobile version is present, you can have up to four different players chopping to be the last person standing. The Switch version also adds a single-player hero mode where you have to save a nest of birds from a forest fire; doing so will net you some more experience that will go towards unlocking characters. Finally, there’s a race mode where four players can compete to chop up a predetermined distance. The two new modes (and addition of multiplayer) justify the meager price change, especially since the original Timberman is free on mobile devices. The aforementioned control scheme tends to work well with the face buttons of the Joy-Con, so getting four single controllers is the best way to play with friends.

As it is an expanded mobile port, Timberman VS does have a problem with players wanting a long game into which to sink their teeth. The game is so straightforward that there’s really no customization options, which is a shame since I would have loved some more obstacles to impede my friends’ progress. It would feel more at home to something like Mario Party if there were some ways to keep the gameplay fresh, but the simple gameplay isn’t that much of a dealbreaker. There aren’t any online modes or leaderboards at the time of writing, which would help out immensely with replay value. Other than those quibbles, it’s still a pretty fun package.

Timberman VS is a surprisingly solid party game that will keep you and your friends entertained for short bursts of time. Crank out the Joy-Con and get to chopping, because the bigger they are, the harder they fall.

Elisha Deogracias is an aspiring accountant by day, freelance writer by night. Before writing for Gaming Trend, he had a small gig on the now defunct Examiner. When not being a third wheel with his best friends on dates or yearning for some closure on Pushing Daisies, he's busy catching up on shonen manga and wacky rhythm games. Mains R.O.B. in Smash. Still doesn't know if he's a kid or a squid.
Related Articles: Indies, Timberman VS
Share
Tweet
Share
Submit