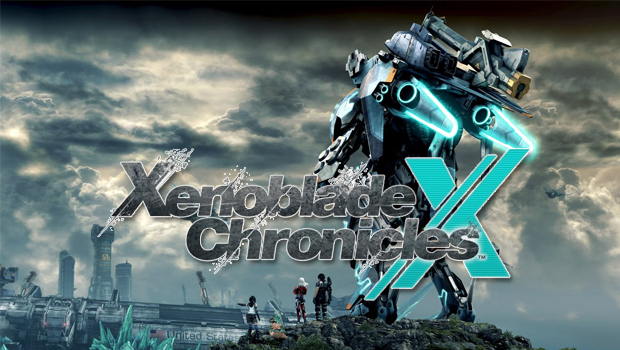 At long last there’s a game that fully legitimizes my ownership of a Wii U. And I’m not talking about some Mario Bros. spin off, I’m talking about Xenoblade Chronicles X from Monolith Soft and Nintendo. I’ve had my eye on this this spiritual successor to the first Xenoblade Chronicles on the Wii since its original Nintendo Direct announcement way back in 2013, and I’ve eagerly followed every trickle of screenshot and gameplay video that I came across. After all that wait, I’m pleased to discover that Xenoblade Chronicles X lives up to the hype and does not disappoint in the least. It’s everything I’d hoped it would be and more.

The game’s premise pulls from some of the past’s best examples of science fiction and anime. It kind of reminded me of a mix of “Titan A.E.” meets “Avatar,” meets “Robotech.”  Earth is destroyed by a technologically advanced race of aliens and only a single ship manages to evacuate in time. What’s left of the human race crash lands on an alien planet, called Mira, where they must find a way to rebuild and maintain a new civilization, while also fending off attacks from the same hostile aliens that destroyed the Earth. It opens with a character customization screen that allows the player to construct their own protagonist to control. Customization makes up a huge part of Xenoblade Chronicles X and it seems much more concerned with the unique individual experiences of the player rather than in the telling of a singular story for everyone to follow.

Xenoblade is an excellent title, although there are some parts of it that keep it from being perfect. it can feel grindy at times and even borderline tedious due to its casual and frequent use of “fetch quest” missions. Running across maps collecting specific items to unlock story progression is nothing new to RPG’s in general, but Xenoblade Chronicles X takes it to an almost unnatural level. Not to spoil anything for you, but there were times when I was forced into completing ridiculous and mundane tasks such as delivering pizzas and crafting romantic jewelry in order to progress in the mission list. These tasks may not sound bad at first but they require you to travel back and forth long distances and spend lengthy stretches of time that inevitably causes a dip in the pacing. The story isn’t bad, but it’s not a grand-reaching epic either. If you’re coming into this expecting a mind-bending, plot-twisted story like the previous Xenoblade title, you may be disappointed. Some of the songs on the soundtrack are annoyingly bad as well (I have to turn the volume down every time I enter the administrative sector of the city). And I’m still not entirely sold on the idea of having a silent protagonist, it just feels awkward to follow a main character who solely converses in shoulder shrugs and head nods. Despite this list of qualms, there still remains an overwhelming majority of things that Xenoblade Chronicles X excels at.

The fighting mechanics are excellent, making even the level grinds and fetch quests enjoyable. If you’ve played the most recent Xenoblade title, you’ll immediately feel at home using this battle system. There’s complete freedom of movement during battles, allowing characters to move to the side, behind, above and, in many cases, beneath the various enemies encountered in the game. The elaborately detailed and intricately customizable set of character skills and special ability “arts” helps to keep the fights interesting, and players are invited to experiment with a wide range of play styles. There’s also an upgradeable job class system that further emphasises the individual playstyle experience.  I myself prefer the up-close-and-personal approach of the “Samurai Gunner” class, but I also understand the appeal of the long distance sniper/healer, “commando” class. It really all depends on the player, and there’s no right or wrong way to play this game.

Apart from the initial concept of the human race crash landing on an alien planet called Mira, there isn’t a great deal going on in the story of the game. In place of an epic and complex story filled with developing characters, Xenoblade Chronicles X gives us an authentic and vibrant alien world of five different continents, each filled with an individual and vast ecosystem. The design of this game is the true source of its appeal. The landscapes are beautiful and thrilling to run, jump, climb, swim and, if you’re patient enough, even fly through. Mira is so vast and diverse in landscape that it truly feels like a vibrant alien planet teeming with life. Exploring the world is one of the most engaging aspects of the game, and thankfully it’s also a huge part of what you do.  It’s a rewarding experience to unlock new landscapes and uncover hidden sources of income while taking time to gaze at awesome looking sunsets and awe-inspiring environments. The game’s heavy focus on the design of the world and its mechanics creates more of a virtual and engaging experience than what is generally possible from games with elaborate plot twists and lengthy cutscenes. I appreciate that Monolith Soft didn’t try to cram in an over-complicated plot; it may sound cheesey, but I think this lack of story invites me to write my own story inside the world as I move through it, and to explore at my own leisure.

The environments and alien creature designs are certainly captivating and wonderful to explore, but it’s the “Skells” that really steal the show. The robot mech exo-”skell”eton suits are some of most appealing and impressive mech designs featured in any videogame. These towering robot suits can convert into cars and jets on the fly and be quickly entered and exited at the push of a button, allowing players the freedom to change mid-battle between mech and on-the-ground fighting styles. The Skells are easily my favorite part of the game.  Honestly, I feel that the use of controllable mechs is something that was sorely missed from the last installment of the series and it’s good to see a return to the Xenogears roots. The prospect of once more being able pilot a giant mech in an RPG setting was definitely what I was most excited about going into this and the developers were clearly aware of their appeal. Like a dangling carrot, the awesomeness of the Skells are continually used to motivate the player. After spending hours upon hours running the vast expanses of Mira, the idea of a vehicle becomes very enticing. This needful longing is further exacerbated when encountering brash Skell pilots who can’t help but brag about how great it is to be able to climb inside one of these machines.

The fact that it takes generally around 30 hours just to attain a rank and status capable of utilizing the mechs serves as a hugely effective motivating factor for what might have otherwise been a monotonous mess of missions. Not providing the Skells until later in the game created a “light at the end of the tunnel” effect that made all the efforts leading up to it fly by like a breeze.  I can’t tell you how badly I wanted to buy a Skell the whole time I was undergoing the rigorous and lengthy process of acquiring the license necessary to operate these convertible mechs. And they’re well worth the wait. Skells aren’t  just cool looking and fun to pilot; they are also extremely helpful in exploring new territories on the planet. Some areas are difficult or impossible to even reach without the ease of travel offered by a Skell’s mobility, and there are enemies that cannot be defeated without the attack boost that the fighting robots can offer. The mechs in this game look, operate, and feel as cool as any mech I’ve ever piloted in similar titles. It reminds me of some of my favorite free-roving mech games such as the old Armored Core games or Zone of the Enders. Xenoblade Chronicles X takes the usual mech concept one step further by placing those mechs inside a vast and fully populated world, ready to explore. The mechs also open up a whole new level of customization that make owning a personal and individualized Skell feel like an enticing reality.

I had a blast playing Xenoblade Chronicles X. It’s the kind of RPG that got me into the genre in the first place. If you’re looking to get lost in an original and continually rewarding sci-fi adventure, and you like mechs, then you’re very much in luck – this one will keep you satisfied for a very, very long time.

Xenoblade Chronicles X is wonderful addition to Nintendo’s impressive roster for the Wii U. It takes the well-oiled RPG mechanics of its predecessor and delivers a vast and alien world so meticulously and passionately designed that it’s easy and fun to get lost inside of it. There are some grindy fetch quests and tiresome elements to the soundtrack, but these flaws become mere background noise once you begin exploring the incredibly immersive world of Mira that serves as the setting. It’s a rewarding gaming experience that should not be missed by any RPG fans, or by people looking for a good reason to own a Wii U.

Stefan started gaming the day his dad brought home a shiny, brand new commodore 64. He's been hooked ever since. Whether he's leveling up his ninja in Final Fantasy Tactics, cruising the streets of San Andreas or working on his Terran build order, videogames are never far from his mind. He is currently on the lookout for an appropriate 12 step program to address his electronic addiction.
Related Articles: Xenoblade Chronicles X
Share
Tweet
Share
Submit