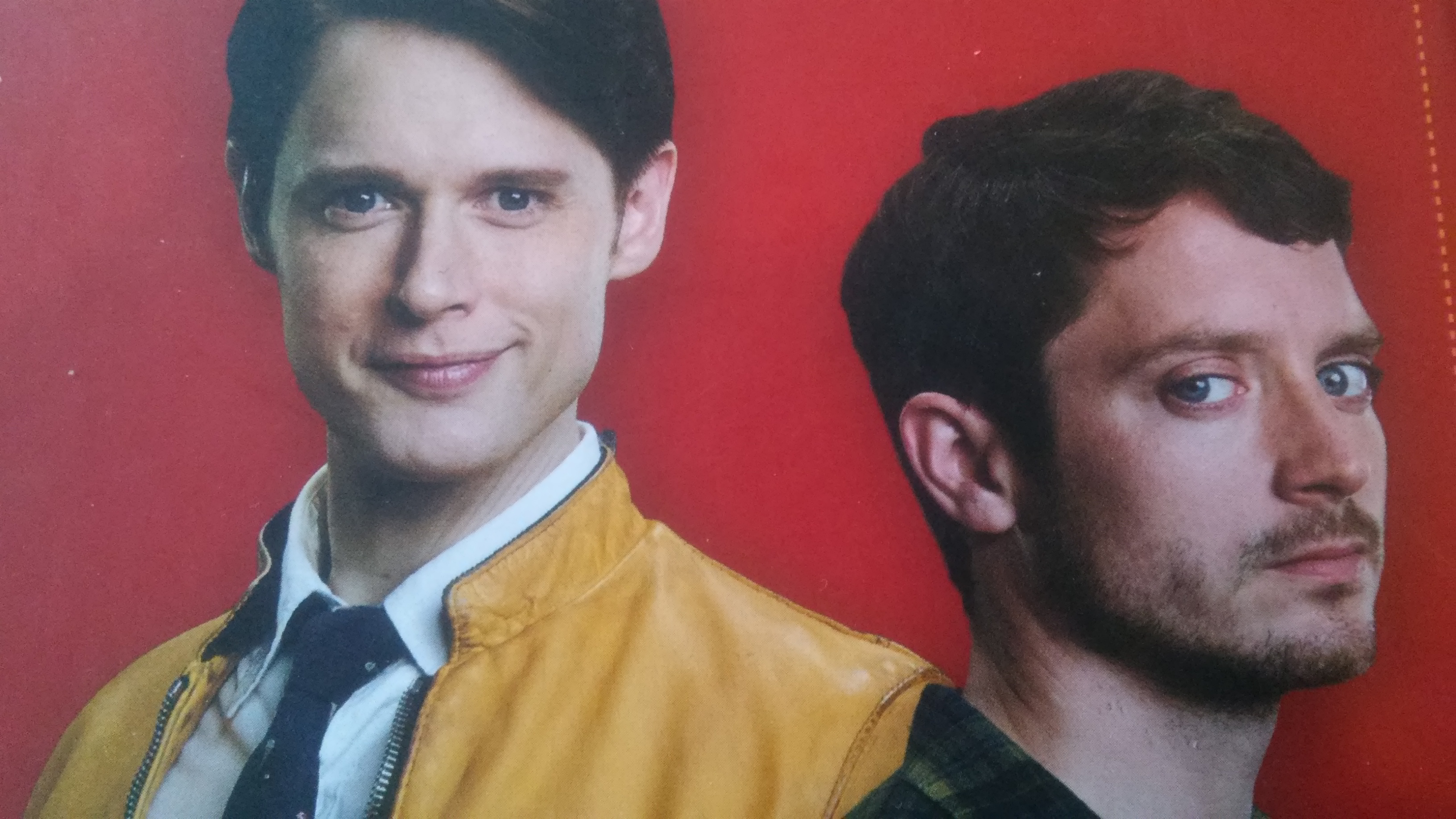 The life of the Dirk Gently franchise has been as chaotic and unpredictable as the cases Mr. Gently himself investigates. Beginning as two Douglas Adams Novels (with future sequels canned due to the death of their author), the series was adapted into a BBC show some thirty years later. The show was witty, engaging, unique, and almost immediately cancelled due to budget cuts. A second adaptation was also an unusual, charming detective series that also met its demise, this time after a slightly longer run. Now this vision of Dirk Gently, the detective whose investigatory methods rely on a faith in the fundamental interconnectedness of all things, comes as a storytelling card game from IDW which leans into the insanity of its source material and asks the players to challenge their wits to connect the random and absurd into something coherent.

Everything is Connected is all about finding the secret order to chaos, and there is so much chaos to find. This is essentially a game of storytelling, with most of the fun derived from the cleverness of the players and the game as a mere backdrop. The game is made up of three decks of cards: the Mystery deck, the Person of Interest deck, and the Clue deck. These decks each have a series of random, seemingly unconnectable features such as a titanium screw, a very late bus, an Elvis impersonator, and a travelling coffin salesman. It is your task to connect these nonsensical pieces into a coherent whole, and entertain the other players while doing so.

The course of gameplay, such that there is, is simple. Each player begins the game with four Clue cards. You choose the first player by determining who is most likely to die next, which is an immediate misstep. I understand that this is meant as a quick joke and a way to make the game unique. It could get you and your friends laughing in speculation, and gives the typically uninspired first player decision some personality. What I think it is more likely to do is instigate innumerable moments of profoundly awkward sadness. What if you are playing with someone diagnosed with a terminal illness, or an older family member? Why start the game by acknowledging that they are going to die before anyone else in the room? While this kind of dark humor is definitely consisted with Dirk Gently’s style, it is not conducive to a fun game night. I am the first to utilize gallows humor, but there is a time and a place, and forcing a room of people to connect death to one person in particular sets the wrong mood for the start of a game about laughing at ridiculous stories.

Those small white smudges are not camera flaws. Those are directly on the cards

That digression aside, the first player becomes the Holistic Detective, the player to his or her left is the Police Detective, and everyone else are Assistants. The Holistic Detective draws a Mystery card and places it on the table next to three Person of Interest cards, after which each Assistant plays two Clue cards to finish the tableau. The Holistic Detective then chooses half of the Clue cards and one Person of Interest, and explains how everything fits together into a cohesive mystery. The Police Detective is tasked with providing an alternative story, using the other Clues but based around the same Person of Interest. Assistants then vote on whose story was the most true (or far more likely, whichever they found the most entertaining), denoting who will take the card as a victory point. If there is a tie, they play the remainder of their Clue cards and each Detective creates a new story with the additional cards. The game ends once everyone has been the Holistic Detective twice. You count the cards each person has, and whoever has the most wins. In the case of a tie, they face off in one final mystery, and if both tie again the universe creates a paradox that lets both of them win. If this sounds like fun to you, it’s because you haven’t played the game yet. See, the concept behind Everything is Connected is excellent, and has been used to great effect in many games before it: give people a grouping of story prompts to let their minds go wild, and watch hilarity ensue. The problem comes in the way it is implemented, and the results you are most likely to receive in game.

To begin with, unlike a game like Funemployed or Snake Oil, where everyone except for the judge gets a turn to make up a story, only two people are involved at a given time in Everything is Connected. Where those games involve one person out of the action, with a good turnaround of waiting and interacting, everyone has to sit and wait for both people to finish their stories. Part of these types of games is appealing to the interests of that person, but with a table of multiple assistants it becomes impossible to appeal to anything in particular. Moreover, you stand a chance of winning every round unless you are a judge in most circumstances. In Everything is Connected, you only have something at stake a total of four times throughout the game. You will be competing against the same two people throughout the entire game, and spend the rest of it waiting for them to tie together elaborate, rambling stories.

Which brings us to the other issue: the basic conceit of this game’s humor is in doing something only practiced storytellers with a lot of time can do effectively, which is tying seemingly unconnected plot threads together into something coherent. Your options as a Detective are either to sit quietly for a few minutes, trying to create something sensible, or to use a stream of consciousness method to make something up with the completely random concepts in front of you in the hopes that it will be funny. This ends up feeling like Axe Cop, only with more confused desperation than charming fun.

Once again, games in this genre usually center on you choosing a few silly options out of many to connect to some idea. There are some odd outliers that spur creativity, but the point is to give you the opportunity to craft something together out of strange options. Everything is Connected does that to an extent, but allowing the Holistic Detective to choose with Clue cards to use in his or her story, which only throws the Police Detective into a realm of more pronounced randomness, with even less choice.

The method of breaking ties is even more laborious. Now the Detectives have even more random nonsense they have to string together, into more elaborate stories. Unless they want to slow the game to a crawl even more, which they must do by the mere fact that they have to take more time away from the other players, they have to start throwing their Clue cards in at random, often making awkward, meaningless diversions just to get through the experience.

The quality of these cards’ ideas means that you will get some great stories out of this. With the right person in the right state of mind, I can see you notching the hilarity up to eleven once you get going. I’m sure that the process of writing this game was amazing: a group of creative people throwing ideas onto cards that could serve as weird story hooks. Actually pulling those together, however, relies on having people together who are willing to spin their ideas out quickly and don’t care about nonsensical digressions. Comedy games often involve just that, but they also often give you more support to actually tie your experiences together. The cards in Everything is Connected are wacky and creative, and I have no doubt that players will be able to pull some amazing plays out of them. However, many will also find frustration in the disparate ideas being thrown at them.

While the quality of card text is high, and inspired me many times while I was reading through them, the quality of their actual makeup is not so satisfying. The graphic design is effective and readable, making it easy to read the cards from multiple angles. However, even through my very first time taking the decks out of their shrink wrap and reading through them, I noticed scuff marks and wear which usually only appear on cards after multiple playthroughs. Is it possible this was a result of temperature for sitting out for a while in the box? I’m not certain. What I do know is that the one component in the game, the decks, did not impress in practice.

Also, if you don’t know who these characters are, some of the cards with art are entirely useless

The cards do have a great deal of blank space on them, which in the case of characters from the show is filled with charming cartoon art. These pieces are so welcome yet so few that it makes the other cards feel empty, and illustrations on the rest of the card would have elevated the decks beyond the functional game pieces that they are.

Maybe this is fitting. Dirk Gently has a history of products with short lifespans and unfinished ideas, down to the original source material (and arguably the author himself). It is an act of fitting irony that I am writing this only days after Max Landis’ adaptation was given the axe (and a few days after unfortunate allegations about the man himself were disclosed). If this is a sort of meta-commentary by the universe, doing the source material a service by adding to the chaotic nature of the franchise, I am impressed. If this is intended as a game, I am not.

Dirk Gently: Everything is Connected

Dirk Gently’s Holistic Detective Agency: Everything is Connected brings all the chaos of the source material’s mysteries right to your table, in all their frustrating, plothole filled insanity. There is a pearl of real intelligence nestled into the design of this game, but actual gameplay feels a mixture of mundane and bombastic that does not serve as a worthwhile experience.

John Farrell is a legal aid attorney specializing in domestic violence, living in West Chester Pennsylvania. You can listen to him travel the weird west as Carrie A. Nation in the Joker's Wild podcast at: https://jokerswildpodcast.weebly.com/
Related Articles: Dirk Gently: Everything is Connected, Tabletop
Share
Tweet
Share
Submit