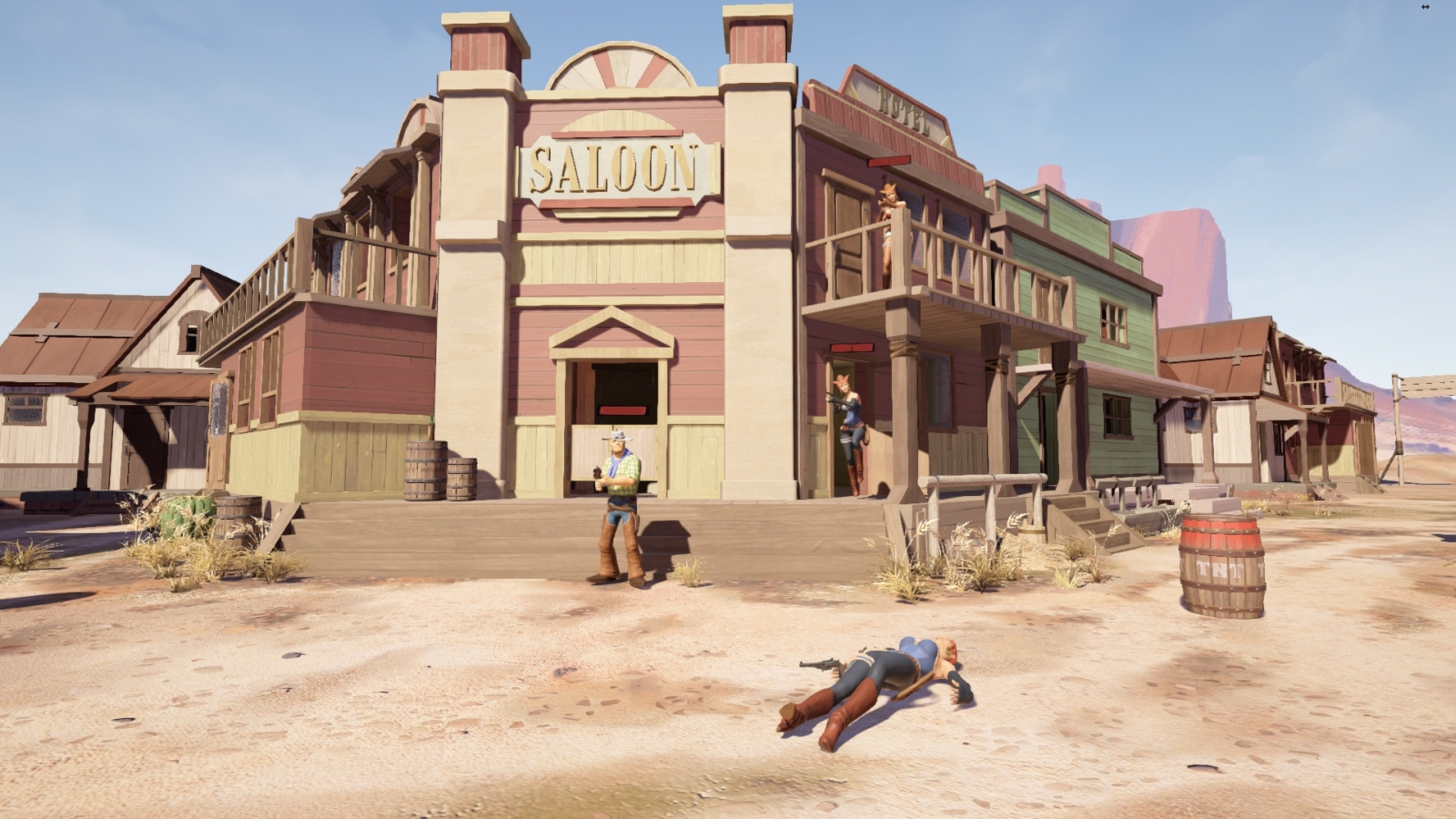 Shooters aren’t exactly a fresh and new idea for VR headsets, but I’m shocked at the lack of westerns on the platform. Virtual Reality and gunplay goes together like peanut butter and jelly, so where’s my virtual Red Dead Revolver? Developer Octobox Interactive makes their VR gaming debut with their spaghetti western High Noon VR. Let’s put on our virtual spurs and take up the tin Sheriff star.

The first thing I noticed playing High Noon VR is that it doesn’t take itself seriously, and frankly that may be one of the best things about it. As bloodthirsty outlaws, loose women, cowboys, villains, and bosses assault the little unnamed town, you need to take them out with a hailstorm of bullets, naturally. That said, you’ll also have plenty of Mel Brooks-style box-falls-on-head opportunities to take out your enemies, which are often far more satisfying than just slinging lead.

Showing these curs who is the law in these parts, you’ll earn cash for each kill. Combo strings start things out simply enough, but adding headshots, precision, and explosives takes it to the next level. And that’s where it gets strange.

As you earn cash, you’ll be able to visit the wagon and buy new weapons. Akimbo pistols, shotguns, dynamite, and a rifle with a scope are all standard fare, but the harpoon gun, minigun, and others embrace the fully ridiculous. The harpoon gun allows you to hook a target, be it a barrel, box, or that desperado that’s shooting at you from the roof, and with a jerk of your hand, yank them to you. This allows you to use that object or person as a shield (or meat-shield!) for incoming fire. If you are inclined, you can pop them in the head and discard them, throw their corpse at their friends, or stack them on obstacles, if you are into that kind of thing. I personally like throwing them in the air and shooting them out of the sky. I should seek professional help.

Mechanically, the touch pad on the Vive controllers is your reload button, and the rest is just triggers and gun waving. The great news, however, is that the aiming was, in my play time, flawless. I’ve shot hats off of heads, cut ropes with precision shots, and shuffled foes from their mortal coil at many different ranges without a problem.

I have to say that despite some audio glitches that cut his corny lines short, I enjoyed the light hearted (but slightly mad) narrator most of all. Alternating between light hearted encouragement, and eyebrow-raising condemnation that you might just be doing this for the sweet, sweet murder, the narrator is a constant unseen companion that gives you valuable advice. He’s occasionally repetitive, but he’s also got your best interests at heart – he’ll wave you off of the boudoir-ladies in the game with an “Eww, gross”.

Stay away from her, Billy. Ew, gross!

The game is built on the Unity Engine, but you wouldn’t know it. It looks good, and the stylized art is more evocative of titles like Team Fortress 2’s super-deformed characters. The game takes place over nine levels, taking place across quite a few areas of the western town, even letting the sun set a few times for a little gunplay at dusk. With giant 1960s Batman-esque live-action “Combo Kill” and “Kaboom!” text pop-ups, the game fully embraces the aesthetic. It’s not meant to be gritty, and the team latched onto that thought throughout.

The best yardstick of a game is when you start thinking about how much you are enjoying it, and how you might improve it. The game features gun purchasing, and you can upgrade those weapons by dropping on the workbench in the wagon, but I can’t help but feel like some armor (poncho), health (hat), or maybe some cosmetic options like a cigar to light your dynamite would flesh out the game even further.

M is for money. Or Murder. Either one, really.

That said, there is an impossible amount of fun in High Noon VR, and it has way more laugh-out-loud moments than any $9.99 game has a right to have. The only real flaw I can find here, keeping in mind that it’s a stationary wave-based shooter, is that the game has a few unbalanced challenges. Bosses are bullet sponges, and some missions seem to require seemingly-impossible scenarios like taking out a foe with every round in the gun cylinder. In the end, you’ll quickly forget about the challenges, instead simply enjoying the mayhem.

High Noon VR is WAY more fun than any $9.99 stationary shooter has any right to be. With stellar (albeit repetitive and occasionally janky) voice acting, excellent gunplay, and more than a few laugh-out-loud moments, this is one you should add to your library. Come for the gunplay, stay for the deep-seated worry that might just be a cold blooded well-intentioned murderer.

Ron Burke is the Editor in Chief for Gaming Trend. Currently living in Fort Worth, Texas, Ron is an old-school gamer who enjoys CRPGs, action/adventure, platformers, music games, and has recently gotten into tabletop gaming. Ron is also a fourth degree black belt, with a Master's rank in Matsumura Seito Shōrin-ryū, Moo Duk Kwan Tang Soo Do, Universal Tang Soo Do Alliance, and International Tang Soo Do Federation. He also holds ranks in several other styles in his search to be a well-rounded fighter. Ron has been married to Gaming Trend Editor, Laura Burke, for 21 years. They have three dogs - Pazuzu (Irish Terrier), Atë, and Calliope (both Australian Kelpie/Pit Bull mixes).
Related Articles: High Noon VR, Let's Play, VR
Share
Tweet
Share
Submit