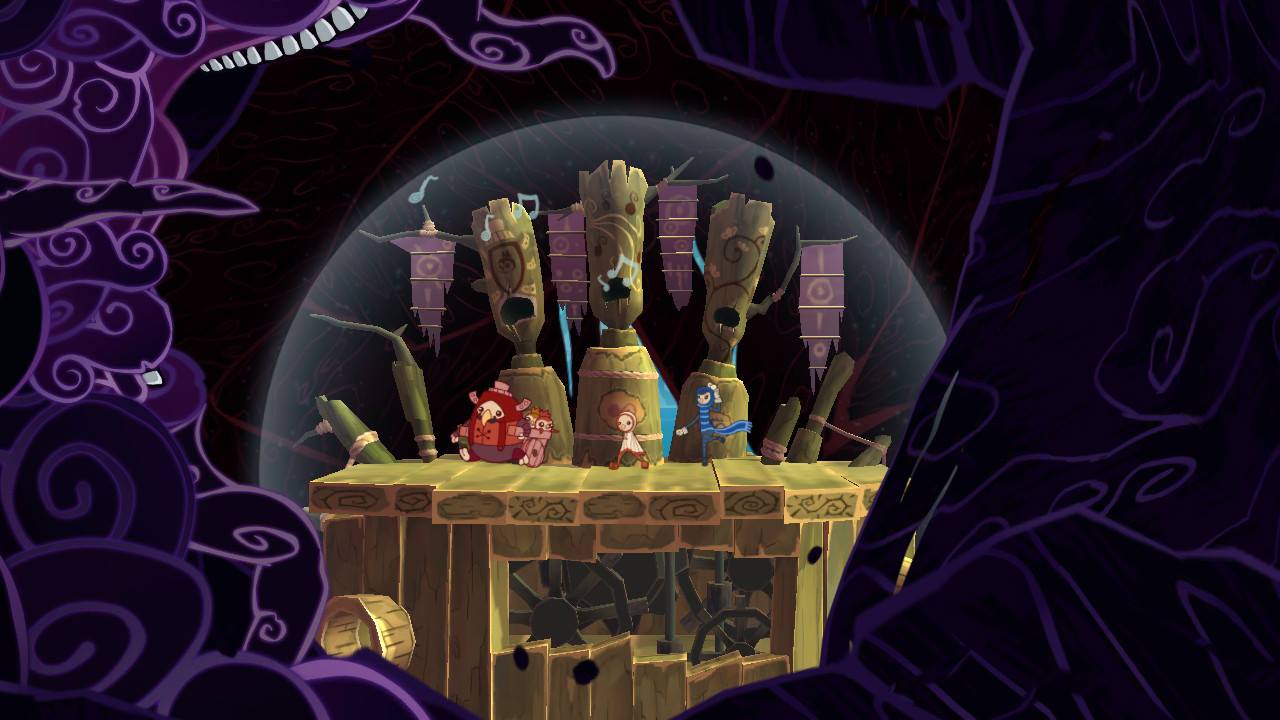 Somewhere between the drawing board and the gamepad, something went wrong with Shu. At its core, this charming 2D platformer has everything it needs to succeed: tight controls, friends that grant your character with new abilities, and challenges to keep the game fresh. But no matter how much heart or intelligence drives the concepts that Shu was based on, those concepts never really come through in the final product. Originally released for the PC and PS4, Shu is freshly available for the Switch, in some ways a little worse for ware.

The minimal story is told through two short cutscenes and gameplay itself: you are Shu, inhabitant of a small island village that is beset by a mystical storm. By jumping, gliding, and collecting various trinkets, you brave the trials of the island to rescue its wayward inhabitants and call upon magical forces to put the storm to rest. A roughly 3 hour experience, story takes a back seat to gameplay, and the simple narrative sets the stage for you well. Shu will join together with the other villagers, who grant him their abilities, while braving these dangers and seeking the island’s heart.

The basics of gameplay work excellently. Initially, your only controls are run, jump, and glide, which is slower than running but allows you to make better distance from platforms and slow your descent while maintaining momentum. As you traverse the world, you will come across air currents that will let you glide along them at an increased speed, sometimes taking unnatural looping patterns to sling you along.

Where things get more complicated are when you meet your companions, but this is also where the potential of the game is most clearly never realized. When you meet another of Shu’s villagers, they become a follower, a la Tails from Sonic 2, who trail right behind you, impervious to damage. You can have up to two of these at a time, and there will be points when the extra baggage will confuse you. The otherwise simple controls get muddled when you lose track of which of three characters on screen is the one who needs to be in the middle of the nearby small platform. The real intelligence of these companions is what each adds to your moveset: a new way to travel and interact with the world. One allows you to activate and deactivate air flows to push you along your path. Another can slow time for specific obstacles, and more let Shu dash, break blocks, double jump, and more.

These companions allow you to see the world in new ways, and make their levels feel like a different kind of challenge, but they are also frustratingly limited. Each companion only lasts a short, set period before being whisked away in a hot air balloon, leaving you behind. You never get to decide when you are using which companion or who you are matching them with. To make matters worse, you almost never chain the abilities together in the game to maximize their potential. Early on, you get paired with a character who can smash blocks and a character who can activate and deactivate certain platforms. I was excited at the prospect of riding up an airflow to quickly smash back down, switching a platform off, and continuing, but that almost never happens. Only in chase segments, when the storm finds you and forces you to race at top speed towards the exit, does it get close to feeling like you are really engaging in Shu, but even in those sequences chaining abilities is a rare find.

These storm segments highlight another frustration I kept encountering with Shu: endless yet pointless collectibles. It’s a hallmark of platformers to fill their levels with challenges based on exploration and diligence, and Shu is no exception in that area. The levels are littered with golden butterflies placed along the levels, sometimes on main routes and sometimes hidden away. Each level also contains six birds that are off the main path and take extra skill to uncover, and one map piece hidden deeply only for those who are looking carefully. The only things these collectibles offer is an additional challenge to those who seek it. As far as I am able to tell, they perform no function in the game other than granting you a high score. In all fairness, getting them is a genuine challenge, requiring knowing the levels backwards and forwards, and playing perfectly without dying. The only way to get them is to play the levels repeatedly, up to the point that you know the layout perfectly, which may be a good way to pad out the time. Ultimately, I don’t see much point.

This is frustrating not only because you cannot experiment with new abilities or strategies, but also because of the way checkpoints work. Sometimes you will pass by a pickup and not be able to get it without restarting the entire level. Sometimes if you die, things you already collected will have loaded behind you, making themselves completely unattainable and forcing you to restart the entire level. Worst of all, many portions of the levels are not difficult, only time consuming, so you will have to replay the same ten or so minutes of boredom until you find a real challenge. Those challenges often come in the Storm segments, when dark swirling energies chase you to the end of those levels, and it’s then that you realize to your dismay that you have no idea how close you can get to the storm before it will kill you.

Shu also suffers from occasional crashes, which come without much warning and can erase progress. I experienced three crashes which booted me out of the game. The first two came at the end of two worlds, collections of similarly themed levels, and luckily did not erase any progress I had made. Unfortunately, the third came right in the middle of the final level, and forced me to replay the longest, most difficult segment right from the start.

This was especially frustrating because of how satisfying the final level is. It’s a sharp and distinct spike in difficulty that I wish I had seen earlier. Where the first world or two (out of six) were largely chores, the last was a real treat. You go from the untamed wilds of the island to a mechanically advanced tower constructed of stained glass windows, with platforms that shatter and reform after breaking, forcing you to move quickly with a new friend who can dash to break through columns. (This is the second one to do the same thing, which is frustrating because the first lasts a scant few minutes before never being seen again.) Later, they throw each of your companions at you in a whirlwind of gliding, wall jumping, water walking, and more. It was here that I saw a glimpse of what Shu could have been, if it had ever really put these abilities to the test.

Instead, what we get is a good set of platforming challenges with some decent levels. There are leaderboards for speedrunning, but not enough paths or experimentation through each level for me to imagine that you would want to invest much time perfecting the game.

Aesthetically, Shu wins some points, but not without caveats. The soundtrack fits each level well, with simple instrumentals setting the right tone and impressing you with the quality of the music coming out of the Switch. In the first world, one section of the soundtrack is so repetitive I thought the game was glitching for a minute or so, but the real issue is when it comes to the collectables and companions. Each butterfly or ability use comes with a small sound cue that you will hear repeatedly, ad nauseum, to the point where you might consider turning the sound off.

The world is made up of animated objects that pop well, easily distinct and its style making clear what each object is. These assets are overused, however. You will encounter the same rocks, buildings, and flowers numerous times in each world, to the point where you might lose your bearings in the middle of a sequence. Comparatively better are the characters, who use charming and simple sprites to stick out against the three dimensional backgrounds. While they do stick out the differing art styles also feel like they are clashing together, and each sprite has precious few animations that you will be familiar with almost immediately.

While playing Shu, I simply couldn’t shake the knowledge of how much more it could have offered. During my time with the game, I kept nearly enjoying it, without ever really feeling engaged or surprised, except for the final sequence where the game booted me with a sudden crash. There is something intelligent and challenging at the core of Shu, but those elements don’t make it through to the game itself.

Shu is a game plagued by its own potential. With tight platforming and shifting abilities, this bite sized game could have been a real treat. Instead, you find yourself constantly bogged down in small frustrations and game breaking crashes. I like the game Shu is trying to be, but not the game it is.

John Farrell is a legal aid attorney specializing in domestic violence, living in West Chester Pennsylvania. You can listen to him travel the weird west as Carrie A. Nation in the Joker's Wild podcast at: https://jokerswildpodcast.weebly.com/
Related Articles: Shu
Share
Tweet
Share
Submit