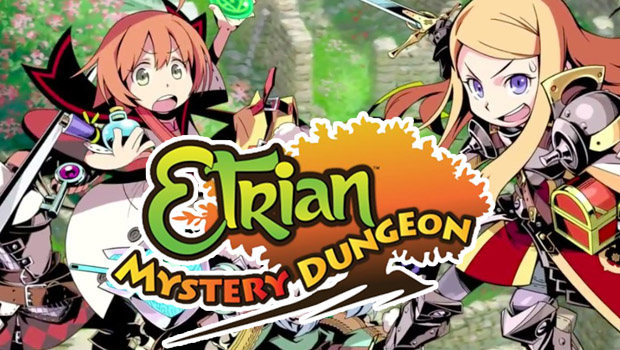 I’m going to be brutally honest, I thought this game was absolute garbage when I first picked it up. The graphics looked dated, the gameplay made no sense at all, and the learning curve was so high that I was constantly dying and restarting before making any real progress. I sat there thinking, “Why would anyone want to play this game?” I wanted to put it down after the first hour. But just for the sake of giving every game a fair shot, I continued playing and hoped it couldn’t get any worse. And guess what – I’m glad that I did, because sometime around the third to fourth hour or so, I realized I didn’t  hate Etrian Mystery Dungeon as much as I thought; actually, the surprising thing is, I kinda started to like it.

Etrian Mystery Dungeon is the latest in videogame developer Spike Chunsoft’s growing line of combination-style games that take the characters from various popular titles and mixes them into the role-playing mechanics of the Mystery Dungeon series. It’s an interesting formula that has spawned some mildly successful games such as “Pokemon Mystery Dungeon: Gates to Infinity” and “Chocobo’s Dungeon.”

Etrian Mystery Dungeon is an RPG that is devoid of fluff and trimmed of all fat. There  isn’t much of a story to speak of, just your basic town in peril excuse to gather four customizable characters and explore dungeons. The presentation is equally sparse. Don’t expect any fancy cutscenes or voiced dialogue. The gameplay and layout are so bare minimum and simplistic that at times I felt like I was playing a vintage SNES title, which makes sense because not much has changed in the look and feel of the series since the first Mystery Dungeon‘s release on the Super Nintendo in 1993.

Comprised of a complex system of randomly generated dungeons and a character control scheme that utilizes grid like movements and turn-based actions, the gameplay of Etrian Mystery Dungeon is its one and only saving grace. The game mechanics are meticulously intricate and designed with the precision of a hand-cranked pocket watch. It may appear on the surface to be like an action RPG such as Zelda, but in truth it plays more like a turn-based RPG like Final Fantasy. Every single player’s move or action counts as a separate turn, followed by the enemy’s turn to move or attack. It’s a fun and interesting system that grows exponentially complex once coupled with in-depth character customizations, separate status meters for health, hunger, magic, and a requirement to build and maintain forts when inside dungeons. And that’s where the frustration and need for patience comes in.

The high learning curve was extremely frustrating when I first started playing. I found it difficult to slow down and not attempt to plow through every battle as if it were an action RPG. Once the system of gameplay clicked, that’s when I finally started to enjoy playing. If you’re into challenging and complicated gameplay, then this may be the game for you. Just expect a frustrating period of adjustment as you get familiar with the game if you’re planning on picking this handheld RPG up.

Etrian Mystery Dungeon is a fun little strategy RPG that will surely satisfy gamers who enjoy mental taxation and heavy frustration on the go. The complicated gameplay harks back to the simple roots of the Mystery Dungeon series. The basic presentation may not interest gamers looking for a more flashy, visually stimulating experience such as "Xenoblade Chronicles,” but it does offer a unique RPG experience that, once learned, can be just as engaging and stimulating as any of the top budget games on the 3DS. I recommend this game to anyone who can appreciate playing a long and thought provoking game of chess, even if it ends with you losing to your opponent.

Stefan started gaming the day his dad brought home a shiny, brand new commodore 64. He's been hooked ever since. Whether he's leveling up his ninja in Final Fantasy Tactics, cruising the streets of San Andreas or working on his Terran build order, videogames are never far from his mind. He is currently on the lookout for an appropriate 12 step program to address his electronic addiction.
Related Articles: Etrian Mystery Dungeon
Share
Tweet
Share
Submit