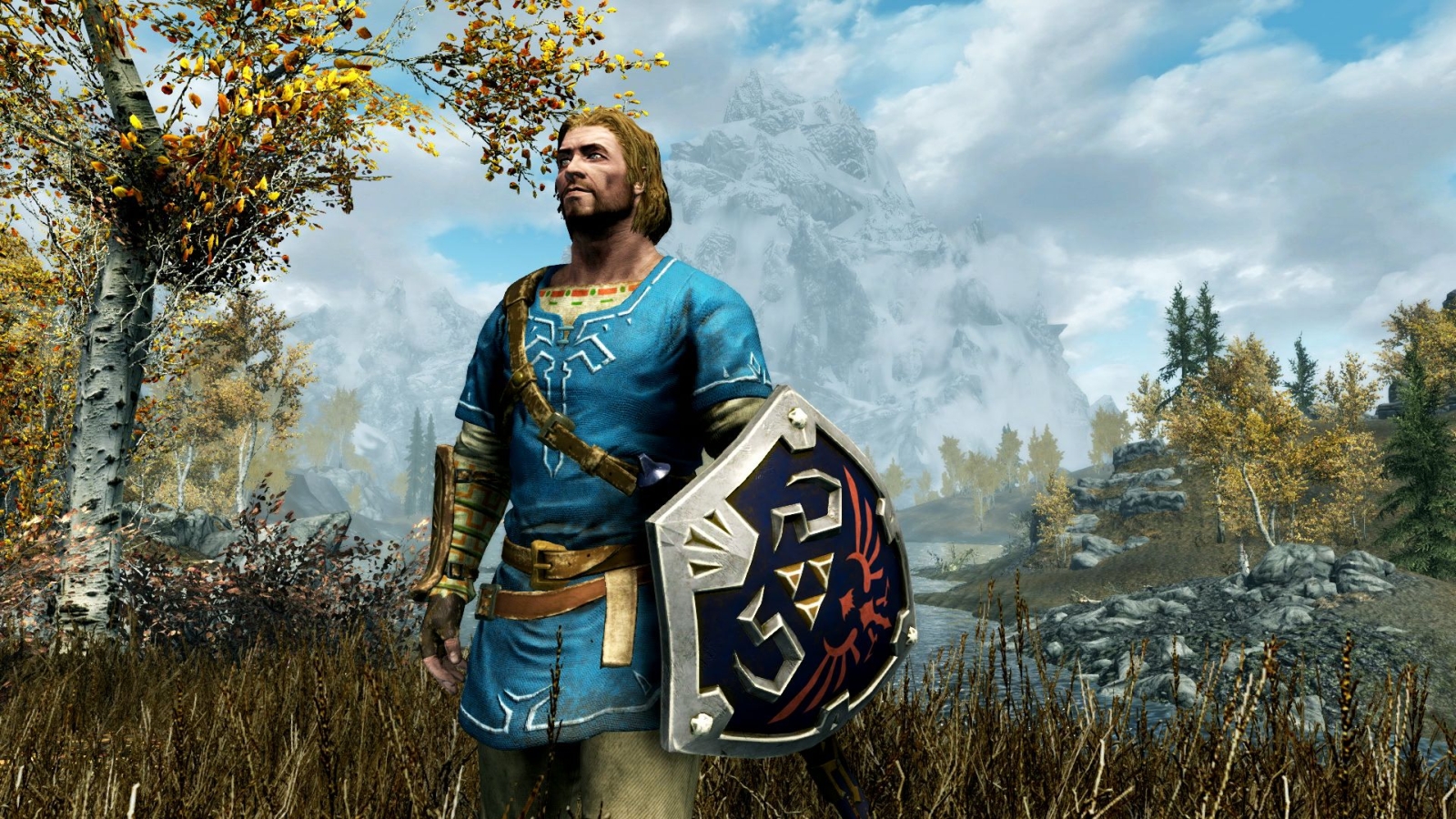 Is that a sweetroll in your pocket? — Skyrim on Nintendo Switch review

I’ve sunk over 300 hours into The Elder Scrolls V: Skyrim when it came out six years ago on 11-11-11, playing the game on several platforms, spanning two console generations, and several flavors on PC. I’ll even tackle it in virtual reality soon. Even after all that, I never once had the thought that I could be playing Skyrim on a portable. You can imagine my surprise.

Nintendo has always pushed itself as the console gamers grow up with, but many adults like myself felt somewhat abandoned when we did become adults. Skyrim’s “M for Mature” is earned with alcohol, sex, drugs, persistent violence, blood, gore, and the game’s opening which features a beheading, and I’m playing it on family-friendly Nintendo’s newest console. Bizarre.

The best way to test Skyrim on the Switch, in my view, was to fire it up and take it on the road. My first few hours of the game were played on the go, hanging out while my wife’s band practiced. I watched as an Imperial priest issued last rites to an impatient and then beheaded Stormcloak rabble rouser, I picked my character class, I dodged dragon flame, and went on to solve the easiest dragon claw “puzzle” ever (a puzzle that is only effective if your character is blind). A quick check of the battery showed me that, despite almost three hours of play, I’d only chewed up about 20% of my battery power.

While you can, and likely will in docked mode, control the game with either a pro controller or the included switch Joy-Con adapter, you might be missing out on one of the cool aspects unique to this version — motion controls. If you are a “sword and board” type, you can slide the Joy-Cons off the sides of the console, and using the left controller to block with a shield, and the right to slash with a sword, tearing up your enemies. Naturally, you can flip this in the other direction, if you are left handed. In practice, using a sword and shield is a nifty way to play when mobile, but not something you’ll likely be using regularly.

Similarly, you can use the two Joy-Cons to fire a bow by holding one in front of the other by a few inches, using the shoulder buttons to hold and nock and release the arrow. In my experience, however, this is all but unusable. The aiming mechanism for the bow is all over the place, and when a dragon is bearing down on you with hot fury in its mouth, you need to be able to hit the target every time.

I wish this was more functional, but it’s entirely optional.

Picking locks makes excellent use of the Switch’s HD rumble technology to provide a truly tactile lock picking experience. I can’t even count how many locks I’ve picked in my Elder Scrolls career, but doing it on the Switch with motion controls made it feel brand new. It’s not that you are waving them around like the examples above, it’s just a far more granular lock picking rumble experience.

One of the unique things about Skyrim on the Switch is the inclusion of amiibo support. Testing this out with my Legend of Zelda: Breath of the Wild amiibo dropped me a few treasure chests containing a Master Sword, Hylian Shield, and Champion’s Tunic (there’s a 20% chance for each tap, and you can only use each amiibo once per real-world day, so no rest-cheating). Best of all, they don’t break nearly as easily as they do in the source product. Jumping on my horse as some sort of Khajiit-Link was kinda odd, but equally satisfying. If imagining Skyrim as some sort of hard boiled Legend of Zelda offshoot is your plan, the tools are here. Throwing the amiibo of loan shark Tom Nook at the game dropped me a fish, a carrot, and what I can only interpret as cab fare, and a quick tap of Alm and Celia’s Fire Emblem amiibos gave me a more fish (what’s with the fish?!) some gems, and a decent starter shield. I suspect your mileage may vary, but if you have a large collection of amiibo, you shouldn’t have a problem with starter gear. Outside of Zelda-themed loot, you’ll also get food, armor, weapons, gems, and more. If you are playing without any amiibo, that’s no problem — you can find the entire set of Legend of Zelda-themed gear waiting for you at the top of the Throat of the World, though they’ll likely be cosmetic as you’ll have outgrown them by that point. As you get your “Fus” (later adventures will add Ro and Dah), you can also strap on your Champion Tunic, a shiny Hylian shield, and the Master Sword.

I really appreciated that Bethesda included Dawnguard, Hearthfire, and the Dragonborn expansions in the Switch release, making it a nearly-complete version of the game. I say nearly complete as the game does not have mod support. As a matter of course in all Bethesda games, I’ve immediately removed the weight restrictions as I find juggling an arbitrary number to be as immersion-breaking as the ability to carry 15 axes, five suits of armor, hundreds of scrolls, and thousands of gold pieces simultaneously. With mods, I’ve always been able to simply turn this nuisance off. Other console versions of the game have allowed some mods to push other elements into the game, and support for mods on PC can transform it into a game that will cripple a GeForce 1080Ti graphics card. Whether it was the closed ecosystem of the Nintendo Switch, or the potential for upsetting the carefully balanced performance on the platform, there won’t be mod support on the Switch. It’s not a detractor, per se, just something to know going in.

It is a surprise to see a game this dense running on the Switch, so it’s no surprise that the game takes up a staggering 14.3 GB of space. By way of comparison, Super Mario Odyssey takes up 5.3 GB, and Mario + Rabbids Kingdom Battle is just 2.4 GB, shockingly. Food for thought as you order your memory card.

Plenty of Epona-like horses running around in Tamriel.

To make the game run smoothly in both docked and undocked modes, the team at Bethesda used the Remastered Edition of Skyrim (the one running on PlayStation 4 and Xbox One) and made a few adjustments to make it fit on the Switch. By my observations (and I’m sure somebody like Digital Foundry will do deeper analysis than mine) it appears that Ambient Occlusion is turned off (which can cause a small amount of a background shimmer effect), but other than that, this version is pretty close to feature complete. Much and more will be said about it in the coming days, but anecdotally, the game looks fantastic, feature-complete, and purpose built for Nintendo’s hardware, with only the most minor of changes. Had you asked me before I saw this game and DOOM, I’d have said both were impossible, yet here we are.

While undocked, the game runs at a stable 720p and 30fps, and over a few dozen hours of play I didn’t see any wobble to that statement. Docked, the game pushes up to 900p — the same resolution of The Legend of Zelda: Breath of the Wild, but Skyrim manages that without the framerate issues of the latter. I’m sure there is an argument to be made for driving all the way up to 1080p, but the first time I needed to hit the road and I simply snapped up my game and took it with me, I stopped worrying about resolutions and just enjoyed the incredible world of Tamriel all over again.

Is that a sweetroll in your pocket? — Skyrim on Nintendo Switch review

Seeing one of the most celebrated open worlds brought to Nintendo’s portable flagship is a welcome surprise. Being able to take a game this expansive on the go is an amazing feat, and seeing it come in this feature complete is Bethesda at its best. While the motion controls have a bit of wonk, come for the HD rumble, and stay for the chance to explain why you are yelling “Fus Ro Dah!” on the bus.

Ron Burke is the Editor in Chief for Gaming Trend. Currently living in Fort Worth, Texas, Ron is an old-school gamer who enjoys CRPGs, action/adventure, platformers, music games, and has recently gotten into tabletop gaming. Ron is also a fourth degree black belt, with a Master's rank in Matsumura Seito Shōrin-ryū, Moo Duk Kwan Tang Soo Do, Universal Tang Soo Do Alliance, and International Tang Soo Do Federation. He also holds ranks in several other styles in his search to be a well-rounded fighter. Ron has been married to Gaming Trend Editor, Laura Burke, for 21 years. They have three dogs - Pazuzu (Irish Terrier), Atë, and Calliope (both Australian Kelpie/Pit Bull mixes).
Related Articles: Let's Play, The Elder Scrolls V: Skyrim
Share
Tweet
Share
Submit