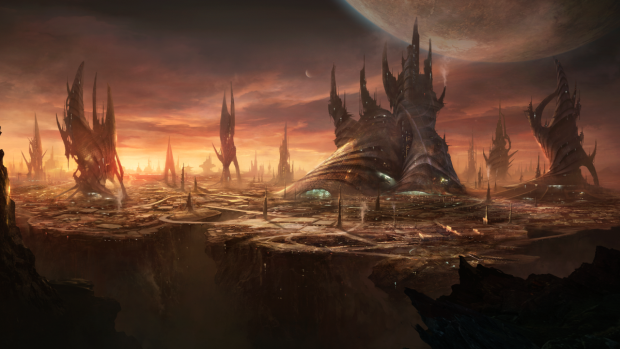 One of humanity’s greatest aspirations lies in space exploration. The feeling of reaching out beyond our terrestrial shackles and seizing the vast, empty vacuum of potential before us is romantic, if not terrifying. Space holds so many rewards, so much danger, and such potential. Stellaris attempts to capture those elements and create a grand strategy game with breadth akin to Paradox’s many others, yet still be accessible enough to fresh pioneers. For the most part, Stellaris achieves its goals of making universe-scale grand strategy, even if the end result feels a little thin.

Stellaris holds no qualms about thrusting you into the thick of things right away, putting you right in the Commander/Dictator/Divine Mandate’s chair and handing over the reins of a newly spacefaring race of beings. The options for creation of your race are plentiful: humans, reptiles, birds, fungus, muscoloids, and more will populate the stars of your created galaxy.

The options within the race creator are a major pull, as you can either choose a cookie-cutter template race or develop your own. Everything, from spirituality and breeding speed, to outlook on foreign relations and more is open, and all of it affects your playthrough greatly.

The map, at the game’s outset. Huge and ripe for exploration.

My first race was a nomadic group of humans, new to the stars. In awe of the extraterrestrial beings who took to the stars prior, they worshipped them under a divine theocracy. It was easy enough to set this up: traits like “nomadic” and “spiritualist” are chosen, outweighed by other aspects like “solitary” or “xenophobic,” and help define your race. The system fills in blanks, with a wealth of governmental options, and then it’s just a balancing act of pros and cons to build the perfect (or imperfect) civilization for galactic conquest.

While jargon isn’t the best way to describe a game, it might be a good way of describing just where Stellaris sits in the scheme of things. “Grand strategy” defines a game focused on the broad strokes; democracy, trading, and Machiavellian machinations that wouldn’t be uncommon in a new episode of Game of Thrones. “4x” is a genre term used for more detailed explorations of war, focused on expanding, exploring, exploiting, and exterminating. Where Stellaris sits is somewhere in between the detailed micromanagement of a 4x game, and the sweeping politics of grand strategy, akin to Paradox’s own Europa Universalis.

For me, the best hours of Stellaris are the first baby steps into the great void of space. When your fledgling race is tiny and insignificant compared to the vast wastes, you really feel like an explorer and pioneer. Most of the early game in Stellaris is spent exploring new systems and expanding beyond your starting sun. You begin with a meager colony, a few ships, and a handful of leaders, with a gorgeously rendered galaxy set out before you begging you to simply go make your mark on the stars.

Chief among them is the science ship, a class of starship quickly becomes an essential part of your fleet. Though they have no firepower, science ships can survey systems, study anomalies, and complete special research projects. Colonizable worlds are hard to come by early on, before you know how to terraform and adapt.

Of course, new planets aren’t the biggest of your needs. Expansion is key, but to do so, you’ll need resources. These come in the form of energy, minerals, and influence. Energy powers your buildings and fleet; minerals purchase new outposts, stations, and ships; and influence helps you enact edicts, negotiate with other races, install new leaders, and even rig elections. New frontiers are key to growing your empire, finding precious moons filled with minerals, primitive species to study, new homes, and possibly other spacefaring races.

Keep your citizens happy and employed, or you could be facing a revolution.

As you expand your borders, through outposts, mining stations, and new homeworlds, you’ll have to not only manage the ever-growing demands of your populace, but also negotiate with other races. You can set up trade deals, negotiate borders and migration (no walls in space), and even insult leaders to get some quick influence points.

It’s when the borders start to close and lines get drawn, though, that Stellaris becomes less and less interesting. Most Paradox games are a little barebones at release and spend a while being patched up and modded, and this game seems to be no exception to that trend. Exploration, quest lines, and race creation is fleshed out significantly, and the tutorial and user interface is wonderfully adaptable and easy to understand. The late game of elections, negotiations, and the occasional intergalactic war grind that wonder to a halt, and show a bit of the kinks in the system.

Combat is as simple as building fleets up and moving them into each other, with the victor usually being the largest number. Your combat ships aren’t particularly inspiring either; though you can outfit them with new lasers or armor, you don’t get to see the visual effect of that. It’s also easy to invite or deter war, as computer opponents seem to only declare war if they think they can decisively route you. Victory in Stellaris is also limited to only domination (owning a certain percentage of the galaxy) or conquest (destroying enough of your enemies), so there’s not much room for the cultural or artistic in Stellaris’ universe.

Zooming in on ships shows a surprising amount of detail.

Communications and negotiations are also severely limited, feeling slim compared to the many options available in other Paradox games like Crusader Kings 2. You can establish trade deals or alliances, but these are usually just a means to an end at best.

At its best, Stellaris can be captivating, as you move from system to system exploring the great unknown. The potential for roleplaying and storytelling is great, as each empire you command will experience different rises and falls unique from any before it. The devil here is in the details, as a meandering late game loses the wonder of space and develops into a re-skinned political simulator. No doubt this will be an incredible game down the road, with heavy modding tools and patching fixing the worst beats, but as it stands Stellaris is at least a solid foundation for future adventures.

Stellaris captures the wonder of exploring space and colonizing the stars, but gets bogged down when the borders freeze and negotiations start. A solid foundation of things to come and an excellent entry-level grand strategy game, this will hopefully be a good start for a greater experience to come.