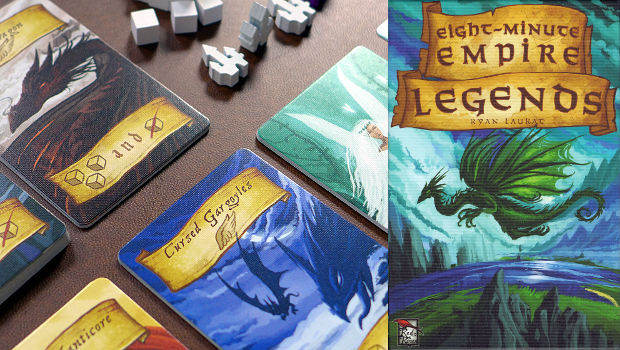 and others join you as you battle to dominate and retain a few undersized patches of land in a fantasy realm, holding out against your opponents, who wield their own unique creatures and lands.

Since it debuted in 2008, Days of Wonder’s Small World has been the 800-pound ogre in the area-control game room, remaining a top-10 seller among all board games. And while the description of the game above sounds exactly like Small World, it’s not.

Instead, it’s a game for up to four that can play in a fraction of the time it takes to play Small World and provides a remarkably satisfying experience that many may like even better.

While it isn’t always the case that a colon in a title signifies a sequel, Legends is indeed the offspring of the previous Eight-Minute Empire. That predecessor caught a lot of game aficionados by surprise in 2012, offering a cool, cute, Risk-like game that darned-near played in eight minutes.

Then Laukat added a fantasy theme…

Tipping my hand as to my ultimate feelings about this game, I have to say that in all of board gaming, my favorite wooden game pieces are the tiny castle “meeples” (casteeples?) found here. All the components of this small game are well-made and capture the eye. Designer Laukat did all the art, which has a gorgeous palette and doesn’t resemble the look of any fantasy game I’ve seen before. It has a Grandma Moses appearance, but never seems primitive. Frankly, I love its style.

The rulebook for Eight-Minute Empire: Legends is a mere eight small pages and could not be simpler to read, understand, and get right the first time. And this is why the box’s age suggestion of 13+ seems out of place. A 10-year-old should handle this game with no problems, and a clever 8-year-old might do just as well.

The object of the game is to purchase fantasy creatures, buildings, and lands for your side while taking advantage of their mystical powers to advance your armies and build cities. By controlling portions of islands on the maps, creating sets of types of creatures, and chaining powers, you ultimately gain victory points. Having the most points at game’s end wins.

The game plays two to four players. Each player gets coins in silver (value three) or copper (value one), and since it is difficult to get coins in the game, what you start with is likely all the cash you’ll have. So, of course, the game starts with a blind bid of those coins to see who goes first; highest bidder wins but must surrender the bid to the bank.

Deal six cards from the deck to the table to form a row left to right. Top them with the card labeled “Card Cost” that displays numbers 0,1,1,2,2,3. Those values dictate the cost of each card during a player’s turn. Players buy one card that serves to power their turn and pay the bank that cost.

Each card contains an image of a creature, building, or landscape and also two banners. The bottom banner contains the action or actions the card will grant during that one turn. This action will be one of the following or a combination of two:

On the top banner on each card are special abilities that accumulate as a player builds his stash of cards. The abilities stack, occur the second the card is bought, and may contain special victory point conditions for scoring at the game’s conclusion:

Play consists of taking a card from the row for free, if the first one, or paying for it according to its price list on the Cost Card. When a card is removed, slide the rest down a space in value, and deal a new card to the right end of the row (cost 3). If the card taken is a place or move for army cubes, the player does do according to the limits on the card. Any bonus additions or movements are added as permitted by the top banner on the player’s existing cards and the one taken.

On the map, the player with the most number of army cubes in a region controls it. The leader in the number of regions owned per map island owns that island. Cities count as an army and also serve as the entry point for the owner/player to put his new armies on the board.

The game ends when each player collects the maximum card limit number established for the number of players.

About that eight minute thing…

So, can Eight-Minute Empire: Legends really play in eight minutes? If not counting setting up the game, and if played with only two players, it’s possible, though for four players it’s certainly closer to 20-30 minutes. Still, this game can fly for experienced players.

Like any area-control game, where players are fighting over areas on a map, more players is better. While the game plays fine with just two, four is the sweet spot for confrontation, with three perfect for more thoughtful strategy.

Think of this as a filler game that plays like something bigger. Sure, you can play Love Letter or Zombie Dice fast, but Eight-Minute Empire: Legends really does feel like a full game of Small World, along with the set collection of that other Days of Wonder hit, Ticket to Ride, crammed into 20 minutes. It’s a richer gaming experience, and for what it is, it’s darned near miraculous. Every experienced gamer who has played this game has shared that they were shocked at how much game is here. And if you’re worried about replayability, the game includes multiple variants using the included tokens, variable player powers with the leader cards, and so on.

Lastly, Red Raven has two expansions for the game: a set of new map boards and a Kickstarter (through Aug. 25, 2014) expansion called Lost Lands that introduces simultaneous action selection to the card play (speeding the game even faster), and offering a double-sized island, new cards, a fifth player option, and more.

While Eight-Minute Empire: Legends was out of print for several months, a reprint is just now hitting the streets. When a game reprints, you know people liked it the first time around.

For what this game is and for how much it costs (street price around $20), it concentrates a ton of strategy into a small package. I think it may be one of the best filler games–a quick game between, before, or after the “big” game–ever produced. The quality is there, and the game play is rich. With all the variants and expansions, it approaches a complete game system. Seeing that all the games so far in the Eight-Minute Empire family share compatible boards, the fun should likely continue for a long time.

Still, if I have to find a con for this excellent game, it’s that heavy gamers might find Eight-Minute Empire: Legends too light and with less replayability than what they’re used to playing. That said, I’m an über-gamer, and I like this one just fine. Realizing it’s not War of the Ring will go a long way toward setting realistic expectations.

All game collections need a half dozen good filler games. Eight-Minutes Empire: Legends excels not only as a filler, but it has enough depth to stray into the big game arena and slaughter a few giants.

Weight: Light-Medium – “Satisfying for adults, but tweens and teens will like it too”

Rich and variable play, solid strategy, lovely components, simple rules, fast play time, and a low street price--Eight-Minute Empire: Legends has everything going for it. One of the best filler games ever made, it’s a must-own for any gamer looking to fill that niche.