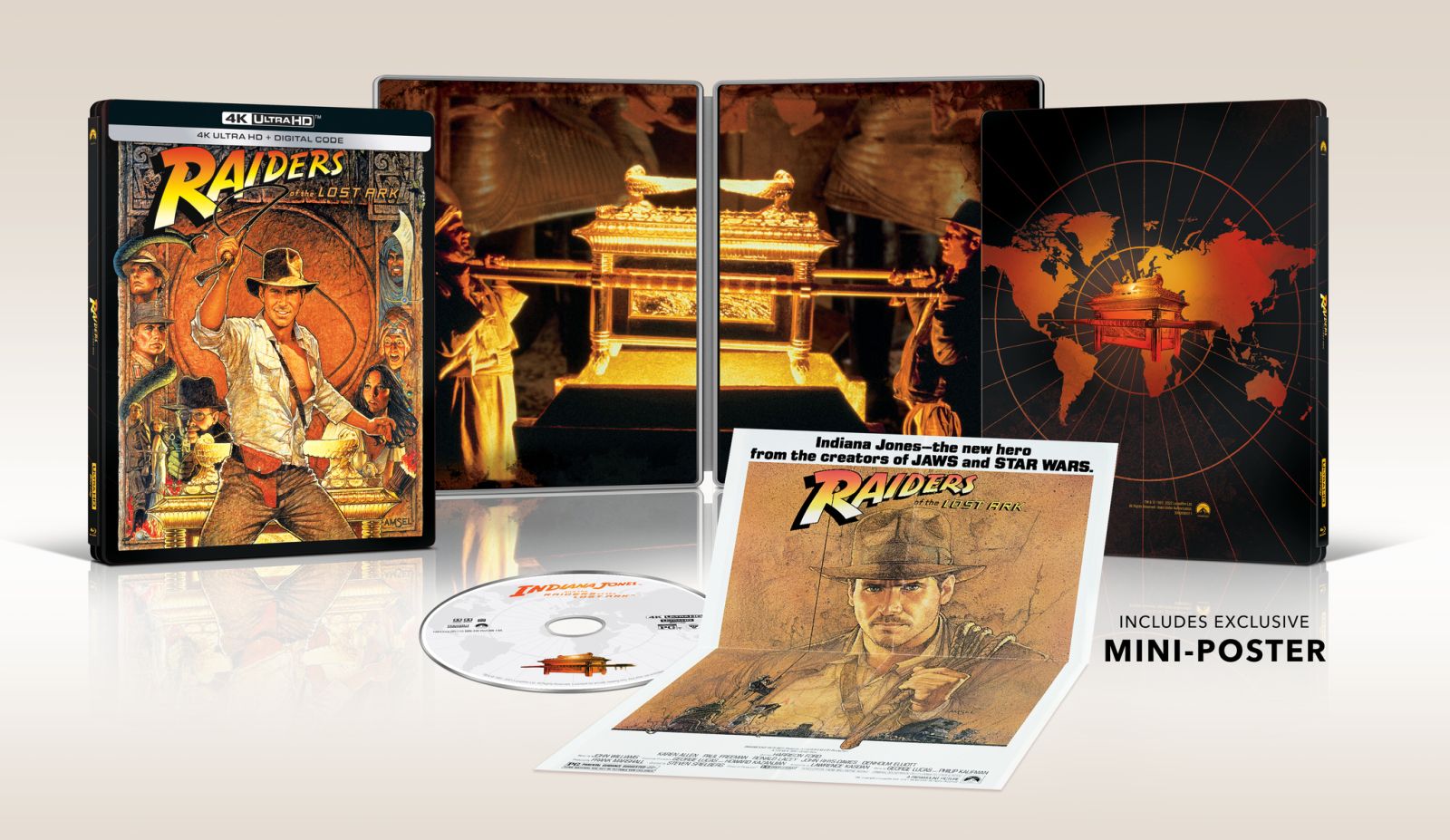 Indiana Jones: Raiders of the Lost Ark in 4K — Throw me the idol, I’ll throw you the whip!

Indiana Jones is a classic Lucasfilm. It’s adventurous, bombastic, and overflowing with campy, highly-quotable moments that you’ll remember for decades. Whether it’s Raiders of the Lost Ark, Temple of Doom, or Last Crusade, the original trilogy is beyond compare. It’s easily one of my favorite film series of all time, but let’s admit something – it’s hideous by modern standards. If you picked up one of the many, many DVD releases of this movie, and to a lesser extent the Blu-Ray versions, then you have watched this film with pops, snaps, crushed blacks, and fuzzy scenes. We’ve gotten our hands on the limited-edition 4K Ultra HD Blu-Ray steelbook release – could this be the ultimate edition of this fantastic film? Let’s find out.

Normally I conclude my reviews of films with a look at the bonus features, but here we’ll be starting with them, and with purpose. In this release the extras on this disc have precisely one purpose – reminding you just how patently awful the original looked. Even the green “Preview for all audiences” and Paramount logo dances on the screen, shaking as the original film struggled to stay aligned. Frankly, before you watch this movie in 4K, you should watch these trailers. Sure, they reveal the entire plot, ruining every twist and major beat of the film, but it’s one heck of a comparison. There’s a teaser trailer and a reissue trailer from where the film went back into the theater for a third time in March of 1983 (the second run was in July the previous year). Every one of these trailers is a horror show, and I’m glad they are here. It’d have been nice to hear from anyone on the crew for this re-release in 4K, but I wasn’t holding out much hope for additional features we’ve not gotten elsewhere. Still, the inclusion of the “Raiders: The Melting Face!”, or “On Set with Raiders of the Lost Ark: From Jungle to Desert”, or “From Adventure to Legend” would have been a great inclusion for a more complete package. There are several other small featurettes present on my Blu-Ray and DVD copies, so I’ll be holding onto those for the foreseeable future it seems.

It’s rare to see this big of a visual jump from Blu-Ray to 4K UHD, but that’s exactly what we are looking at here. The inclusion of HDR10 alone is worth the triple dip as the color pass the team has done across the entire film is evident. The sub pen scene has some grain to it, but the color correction contrast between the red Nazi flags and the stark grey concrete walls looks magnificent, as strange a compliment as that is. Across the board there’s been some excellent tone matching on skin. This is especially true in low-light scenes where characters no longer look washed out or entirely too dark. 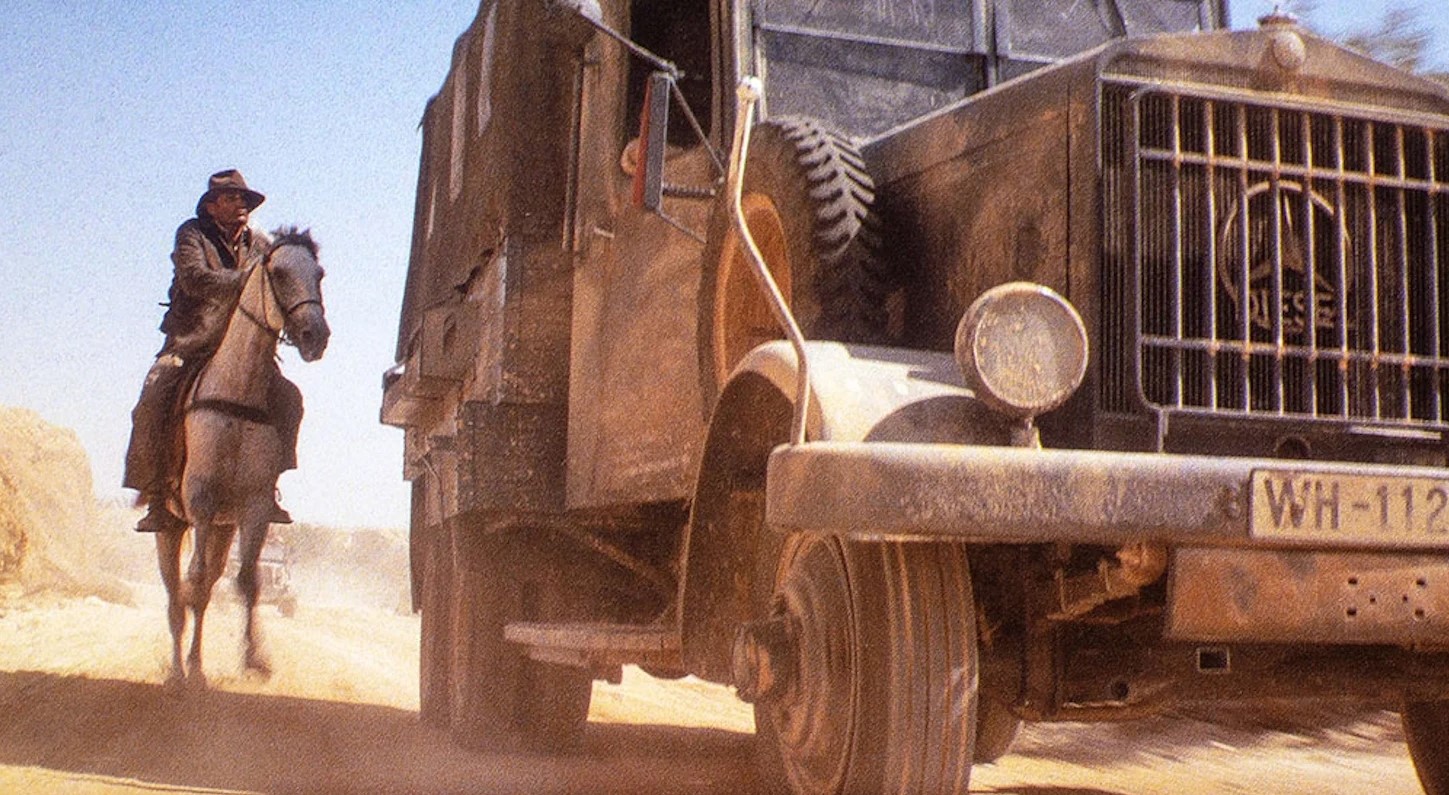 The original film was shot on 35mm Panaflex-X cameras at 2:39:1, and that’s been preserved here. The team clearly digitized that 35mm original camera negative and rendered them in native 4K, complete with HDR10 and Dolby Vision baked right in. I noticed it the most during the sub scene where the map is overlaid on the submarine commanders barking out orders. This scene was unnaturally dark with red bleed everywhere. Now, that red is well within the band, bathing the scene but not overpowering it. There are a few scenes that are a little rough, but most of the time the grain looks natural. The scenes that do suffer are thankfully brief. For example, the two second establishing shot that demonstrates that Indy is back at the capital is very grainy and slightly out of focus, sticking out amidst the fantastic restoration work elsewhere. I do have the best news, however – the glass in the infamous Well of Souls scene has officially been removed. In every entry till now it’s very clear that the snakes are safely behind a glass or plexiglass enclosure, keeping Harrison Ford completely safe. The lightning flashes would illuminate it pretty badly, breaking the immersion. In this 4K release the glass is no longer visible, making it seem like the snakes could give Indy an unfavorable welcome at any moment.

This isn’t the first time we’ve seen these films released in 4K – last year saw a box set of all four films. I missed out on that box set, so this is my first time seeing the first one in 4K. Subsequently, the release train on these films will carry post Father’s Day, with Indiana Jones and the Temple of Doom on July 12th, Indiana Jones and the Last Crusade on August 16th, and finally Indiana Jones and the Kingdom of the Crystal Skull hitting on September 20th. If you are a fan of Steelbook releases, there’s your calendar, with each film being kitted out with a digital copy and a mini-poster reproduction of the original glossies for the theater included.

I’m going to take a moment and speak directly to Paramount. Any movie released on Blu-Ray, much less 4K Blu-Ray should have the resume feature. It’s frustrating when you need to come back to a longer film, only to have to sift through the scenes section to find your spot. C’mon guys – do better.

Just as they did with the video, the audio remastering cleans up a lot of the worst parts of the original release. With the help of the original sound designer Ben Burtt, the Paramount team worked through rebalancing the film. I thought the DTS-HD mastering on the Blu-Ray was as good as it got, but somehow the Dolby Atmos soundtrack sounds even better. John Williams’ truly memorable soundtrack comes to life, bolstered by excellent sound balancing to push the front channel during dialogue scenes, but emphasizing a really clear midrange outside of speaking parts. The foley artists were working hard on those slabs of beef during the plane fight scene, and they now come across with a sharp crack and a satisfying thud like I was back in theater all over again. There are a few moments where the soundtrack is a bit too loud, overshadowing some of the speaking parts, but it’s thankfully infrequent. On the subtitle side, there are a metric ton, with English, English for the Hearing Impaired, Cantonese, Danish, Spanish, French, Italian, Japanese, Korean, Mandarin, Dutch, Norwegian, Russian, Simplified Chinese, Finnish, Swedish, and Thai all supported. Nearly every recent Paramount release seems to support this same list, but it’s impressive that it’s this large.

Indiana Jones continues to be one of my favorite movies of all time. Each one of these films is chock full of snappy writing, quotable one-liners, and practical effects that hold up to the test of time even today. While we wait to see just what Indiana Jones 5 could be, Raiders of the Lost Ark in 4K, complete with gorgeous Dolby Vision, HDR10, and an excellent audio mix, is the best this film has ever been. Even if you own the Blu-Ray set, this is a must-have upgrade for any fan.

Indiana Jones: Raiders of the Lost Ark in 4K — Throw me the idol, I’ll throw you the whip!

This movie is powered by Harrison Ford’s trademark smirk, and it’s never looked this good. And yes, Belloq still eats that fly, but now you can see it in the most glorious, color corrected, high definition possible. This is a must-have for any film fan.

Ron Burke is the Editor in Chief for Gaming Trend. Currently living in Fort Worth, Texas, Ron is an old-school gamer who enjoys CRPGs, action/adventure, platformers, music games, and has recently gotten into tabletop gaming. Ron is also a fourth degree black belt, with a Master's rank in Matsumura Seito Shōrin-ryū, Moo Duk Kwan Tang Soo Do, Universal Tang Soo Do Alliance, and International Tang Soo Do Federation. He also holds ranks in several other styles in his search to be a well-rounded fighter. Ron has been married to Gaming Trend Editor, Laura Burke, for 21 years. They have three dogs - Pazuzu (Irish Terrier), Atë, and Calliope (both Australian Kelpie/Pit Bull mixes).
Related Articles: Indiana Jones: Raiders of the Lost Ark
Share
Tweet
Share
Submit