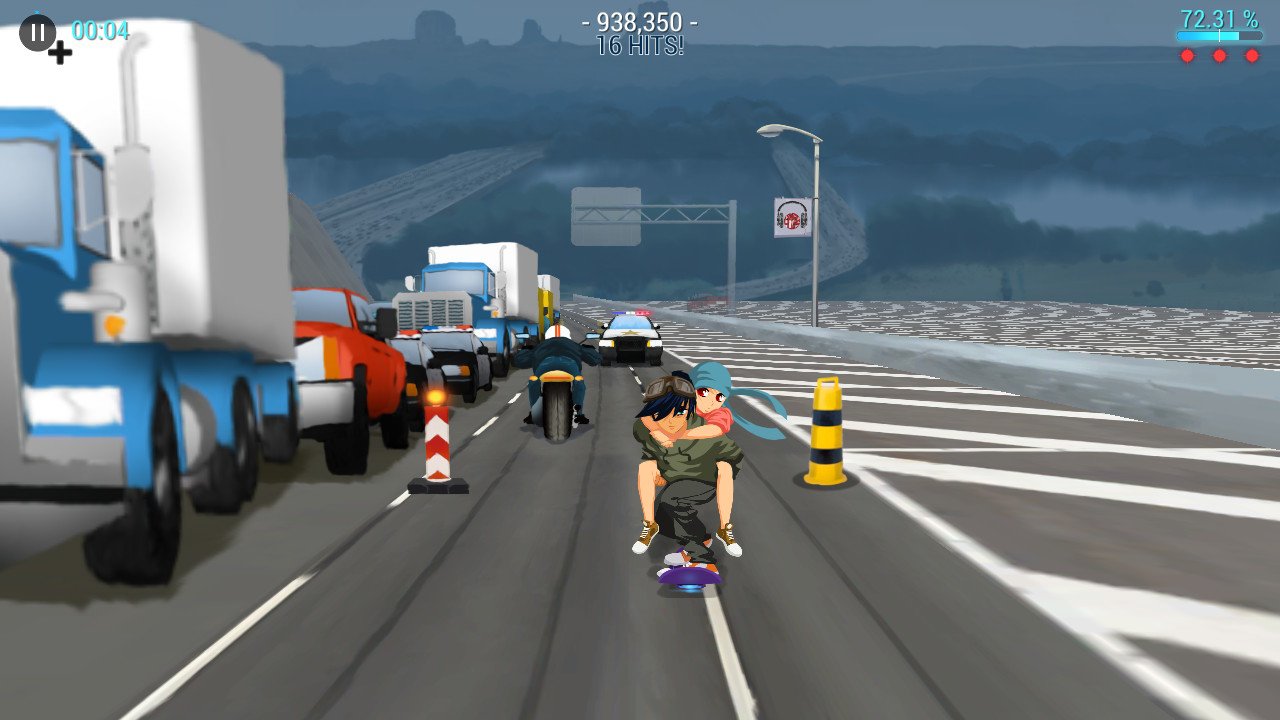 I’ve been ecstatic with the outpouring of rhythm games in the past year on the Switch, and it seems that there’s a never-ending selection of titles to scratch my rhythm game itch on the console. Recently, DigixArt has released Lost in Harmony for the Switch, and it’s an experience that blends an excellent soundtrack with an ambitious mix of platforming and rhythmic gameplay.

From the beginning, the main gameplay for Lost in Harmony is wildly different from most rhythm games on the market. You control your character on a lane of dangerous hazards, jumping and dodging based on visual and audio cues. From time to time, you’ll have to press the ABXY buttons or touchscreen to tap in time with beats that will pop up on the screen, all the while keeping track of the obstacles on the field. It’s a frantic system that rewards attention and a sense of rhythm to succeed, with stages requiring a completion rate of 50% in order to advance to the next one. You’ll be graded on timing for the button segments and if you hit any obstacles within the stage (the latter of which counts a penalty towards your completion rate). In addition, there are three different orbs that you can collect for customizable goodies on your character.

For those that didn’t know, the original mobile versions of Lost in Harmony were free-to-play, but the Switch version does away with the lives system and opts for a complete package of both campaigns (more on that later) included. It’s a great value for an excellent title such as this, and this version acts as a definitive one. The controls are revamped as well, and for the most part, translate decently to the console. Controlling your character when dodging obstacles is quick and works in more difficult segments, though admittedly the button press segments are a little clunky due to face button placement. There are a few stages that rely on AY or BX presses, and it’s rather tough to mash on the buttons precisely with your thumbs. Alternately, you can use the touchscreen for all controls, but I found that it didn’t work as well when dodging and jumping, as the up swipe action was inaccurate during tricky portions.

In hard mode (and some of the more challenging songs on normal), you’ll have to contend with obstacles as well as tapping buttons.

The most important part of a rhythm game is its music, and Lost in Harmony does a surprisingly good job with its soundtrack. Most of the stages within the first main campaign are public domain and classical pieces remixed with electronic and brighter genres, from a triumphant rendition of Rise of the Valkyries to a dubstep-flavored remake of In the Hall of the Mountain King. My favorite piece was probably the poppy take on Korobeiniki, aka the Tetris theme. It helps that these tracks highlight the game’s mechanics very well; certain beats of the song signify the arrival of obstacles that you’ll have to avoid, and because they’re classical songs you’ve heard throughout your whole life (probably), they’re instantly recognizable. It takes a unique game to make the Funeral March a banger, and by golly, Lost in Harmony does it.

That being said, there are a couple vocal pieces that punctuate the game’s more emotional moments, and the choices are used to great effect. The artists are Wyclef Jean and Beckah Shae, and both use their distinct voices to create a beautifully somber yet peaceful setting for the stages that their music is included in. The second campaign has explicitly EDM tracks, so they’re more suited for rhythm game veterans that want some fast-paced music to rock out to. Put simply, the soundtracks are infectious and I’ve been listening to them on my phone long after I put the game down.

As mentioned earlier, Lost in Harmony includes two different storylines: Kaito’s Adventure and M.I.R.A.I.’s Escape. I would consider the first one to be the main campaign, as it delves deeper into its narrative throughout that story’s fourteen stages. In it, the friendship between Kaito and Aya is revealed through in-game text messages that are shown between stages, known here as dreams. You can see little slice-of-life segments between the two as they discuss Aya’s unnamed illness, and she gets worse as the campaign continues. While it does have some sad moments (particularly in the middle and in the post-game coda), the characterization is underwhelming as I didn’t really feel the emotional relationship between the two characters. Imagine The Fault in Our Stars without the melodrama or cute interactions, and you have Kaito’s Adventure. The overall story is the weakest part of the game, but I appreciate the developers for trying something new.

During this storyline, we’re treated to different dreams within Kaito’s psyche as he processes the information from the text messages. The backdrops for the different stages are gorgeous for an indie, with 2D animation throughout gameplay. It can look choppy at times, but Lost in Harmony’s stylistic approach to its graphics makes it stand out from other platformers (or music games, for that matter). These stages are around 3-5 minutes long, with different segments that constantly change the background and playing field. One stage might have you in a desert dodging buffalo and eagles, and then shift to night time where you have to mind trucks that are speeding towards you. It’s a silly little gameplay change that is justified by the dreamlike nature of the campaign. A straight runthrough of the campaign will take you a little over an hour and a half, but the game does include a hard difficulty (which takes the complex mechanics and turns it up to 11), as well as glowing orbs you can collect to customize Kaito and Aya’s looks. It’s a campaign that doesn’t overstay its welcome, but is highly replayable, especially with the aforementioned classical remixed soundtrack.

Robot bears! What a time to be alive.

For those that want a little more, the second campaign, M.I.R.A.I.’s Escape is included. Here, you control a robot that leaves its rest state after getting threatened for destruction, and you have 12 stages to explore. The soundtrack is an original one, and is distinct from Kaito’s Adventure in terms of musicality and instrumentation; it’s a wildly different sound that will appeal to a different audience. The story is glossed over here, but in this case, it’s for the better since the plot is simpler this time. The stages are also shorter too (lasting under three minutes), but this creates an emphasis on scoring and mastery compared to Kaito’s Adventure’s approach on taking in the scenery.

Lost in Harmony is a very ambitious title that mixes a surprisingly infectious soundtrack with frantic and fun rhythm-platformer gameplay. It’s one musical romp that’s great for rhythm game players of all sorts, and I can’t wait to see what DigixArt does next!

Elisha Deogracias is an aspiring accountant by day, freelance writer by night. Before writing for Gaming Trend, he had a small gig on the now defunct Examiner. When not being a third wheel with his best friends on dates or yearning for some closure on Pushing Daisies, he's busy catching up on shonen manga and wacky rhythm games. Mains R.O.B. in Smash. Still doesn't know if he's a kid or a squid.
Related Articles: Indies, Lost in Harmony
Share
Tweet
Share
Submit