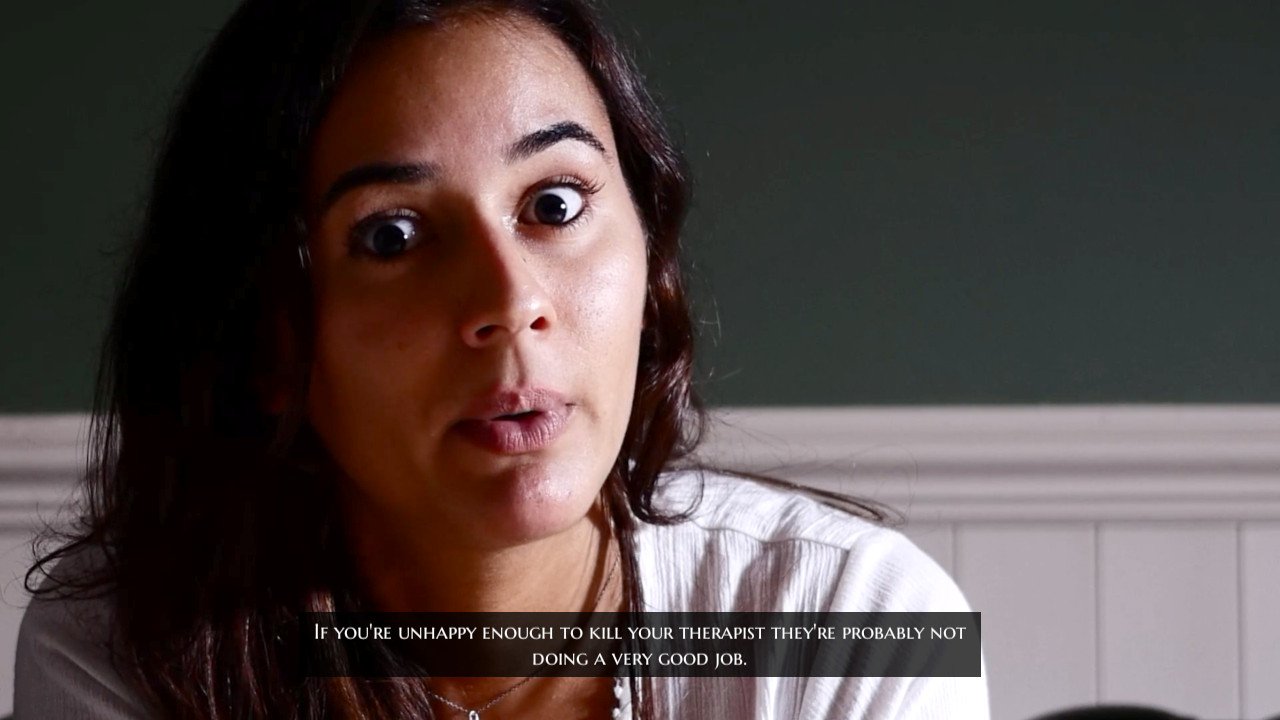 I have a bold opinion: the renaissance of full motion video is here, and Wales Interactive is the harbinger. The publisher recently released The Bunker and Late Shift on the Nintendo Switch, and I can see the how both games innovated the genre of yesteryear. With The Infectious Madness of Doctor Dekker, full motion video has now reached for the Lovecraftian mythos, and its engaging text-based gameplay mixed with superb performances is something fans of old-school adventure games should check out.

BECAUSE SHOVEL KNIGHT DOESN’T EXIST IN THIS UNIVERSE, DOCTOR.

The Infectious Madness of Doctor Dekker puts you in the role of a nameless doctor as you observe and counsel the late Dekker’s patients after he is mysteriously murdered. As Dekker’s replacement, Your task is to find out who murdered him. Your main cast consists of five eccentric patients, as well as Jaya, your perky yet well-meaning helper. The story is split among five acts, which will also include some one-shot patients that are optional to talk with but provide some more exposition.

Whereas The Bunker was a basic point-and-click title and Late Shift was an interactive movie, The Infection Madness of Doctor Dekker feels more akin to a text-based adventure game. During each act, you are free to interview each patient separately, switching when needed. Like a text-based game, you can type out questions to advance the interview, or you can use pre-loaded prompts that the game gives you. Progression for each patient operates on a traffic light system: Asking the right topics will turn a patient’s display from red to yellow, indicating that you have sufficiently discussed the topics you need to advance. You don’t even need to free type if you want to advance in the story. However, in order to get all a patient’s responses (thus turning a patient’s display green and finding out more info), you’ll have to keep typing.

It’s not THAT simple yet, folks.

There are some features here that alleviate potential frustration in typing; if you end up triggering an identical conversation response based on the words you write, the video will turn sepia and might even emphasize words that will help further your investigation. You also don’t have to uncover every single response in order to advance to the next act, and you can skip ahead whenever you reach the minimum number of responses.

This system is engaging and had me furiously typing to see what I could uncover, even though the predetermined response system (optimized for console, as utilizing the Switch’s keyboard is…clunky to say the least) was sufficient enough to keep the story going. However, I kept getting frustrated when trying to find unique responses that would shift the display from yellow to green, mainly because of how oddly particular the parsing system is. There were multiple times when a hint in the notes would direct me to ask or tell a character something, but doing so would elicit an unresponsive prompt. It’s especially egregious when I asked a character how she felt about her situation that she just told me about only for her to shrug it off.

I must give props to the story here, which begins as a straightforward murder mystery and then delves into something out of a Lovecraft novel. Each of the patients hold some secrets and quirks, and it’s cool to see how each patient evolves (or devolves, as the madness increases). From Nathan (a man who apparently keeps reliving his days and struggles to move on from his late lover’s death) to Elin (a nurse who can “change her skin” that unfortunately has a penchant for those she assists dying) to Bryce (a gravedigger that has an “extra hour” of time, which he uses for voyeuristic purposes), the cast is troubled.

Even one of the later pieces of evidence outright namedrops Cthulhu, and it only gets weirder after the second act. To continue talking about the story would make this review delve into spoiler territory, but suffice to say, it’s one that you’ll think about for a while after you put it down. Those who love psychological thrillers or Lovecraft-lite horror stories will get a kick out of this.

In addition, there will be some moments where you can affect the story through decisions and advice the player character can give. It was pretty neat, for example, that I was given a choice to tell Nathan to burn his late lover’s chair rather than her pictures (it makes sense in context), and it seemed to have a meaningful impact in our proceeding conversation. It makes The Infectious Madness of Doctor Dekker feel like an interactive experience rather than a static one.

The overall content is comparatively lengthy to other FMV games, as this game actually holds the Guinness World Record for most FMV footage recorded, with over seven hours in total. It helps that the actors are so entertaining to watch, and their development throughout the game kept me engaged throughout my playthrough. This is leaps and bounds past The Bunker and Late Shift, which can be completed within a little over an hour; the fact that the true killer is randomized during each playthrough also makes for some pretty good replay value. In addition, you can skip dialogue prompts, which is a very helpful feature when you accidentally repeat a statement or just want to breeze past some filler in a subsequent playthrough.

The Infectious Madness of Doctor Dekker

The Infectious Madness of Doctor Dekker is a reinvention of full motion video for the current generation of games. Its quirky and troubled cast gives some spectacular performances, and the text-based elements make this adventure game an excellent way to get into the genre.

Elisha Deogracias is an aspiring accountant by day, freelance writer by night. Before writing for Gaming Trend, he had a small gig on the now defunct Examiner. When not being a third wheel with his best friends on dates or yearning for some closure on Pushing Daisies, he's busy catching up on shonen manga and wacky rhythm games. Mains R.O.B. in Smash. Still doesn't know if he's a kid or a squid.
Related Articles: Indies, The Infectious Madness of Doctor Dekker
Share
Tweet
Share
Submit