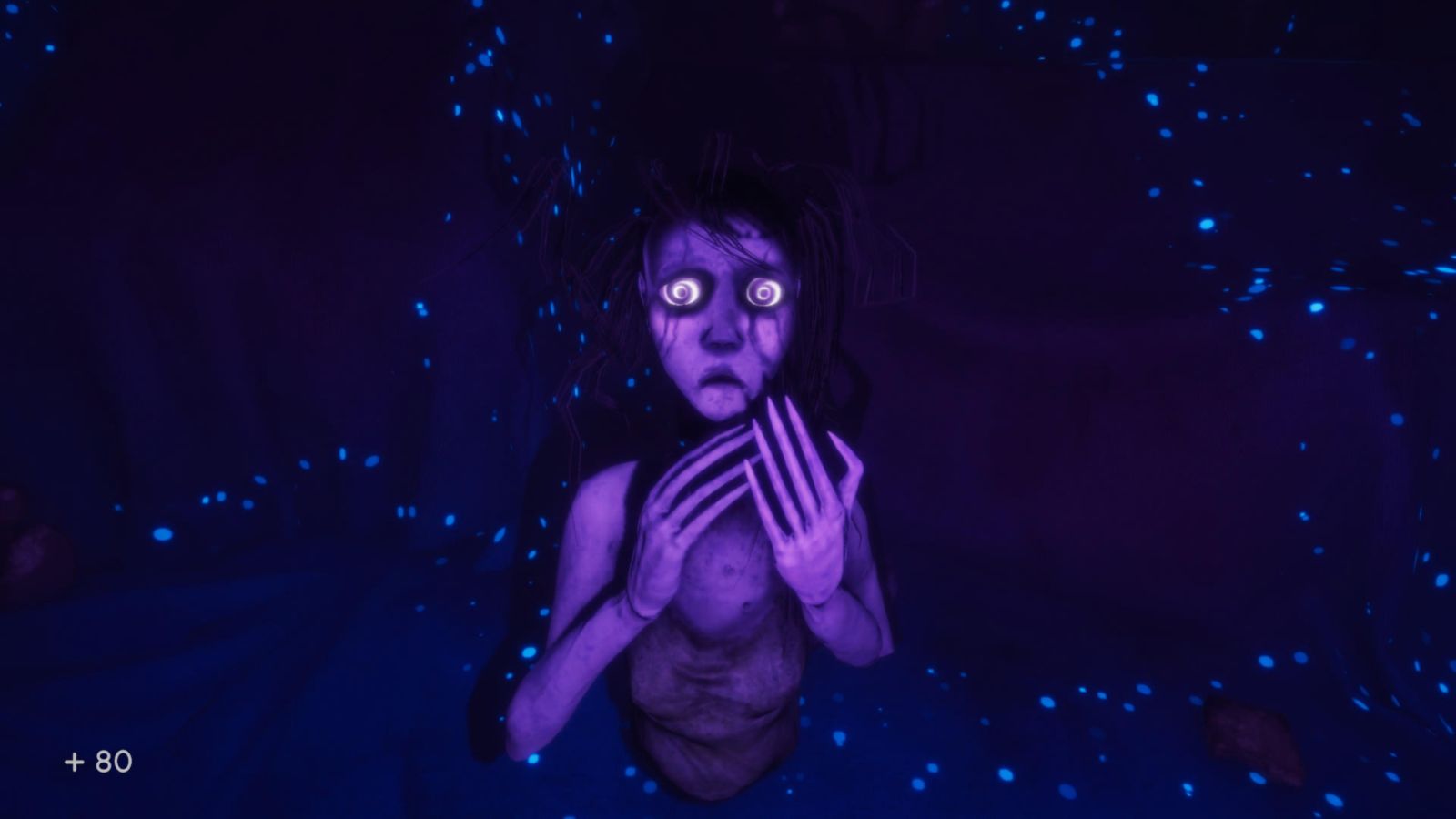 Desmond Wales is trapped. The building he’s in houses his psychology practice and still looks familiar, but is greatly dilapidated. Outside, water is rising quickly, already engulfing a few smaller buildings. The front door is boarded up, and he is unable to leave. A phone rings and he answers. A mysterious entity is on the other line – berating him, mocking him, tormenting him – but why? As he explores the run down building he finds sarcastic notes, making fun of his situation. Who locked him in here? How does he escape? Eventually he stumbles upon a lit up door. He opens it to find – his apartment? But how? His apartment is nowhere near his work. Inside is a tape bearing the name of one of his patients. He leaves his apartment and heads back to his office, where he places the tape in a tape deck and is instantly transported into the mind of his patient.

The gist of the story is simple – Desmond is a psychologist in Milton Haven who must find tapes documenting his conversations with his patients and then enter that tape to fight through his patients’ inner demons and free them from their torment, all while figuring out why he is in his current situation and how to escape. In between each patient he must explore the building in a pseudo-Metroidvania style, using tools found in each tape. This is a setting ripe for exploration, allowing each setting to feel distinct, culminating with each patient’s inner demon serving as the level’s boss, while also adding surprising depth to what could have been a routine horror game. 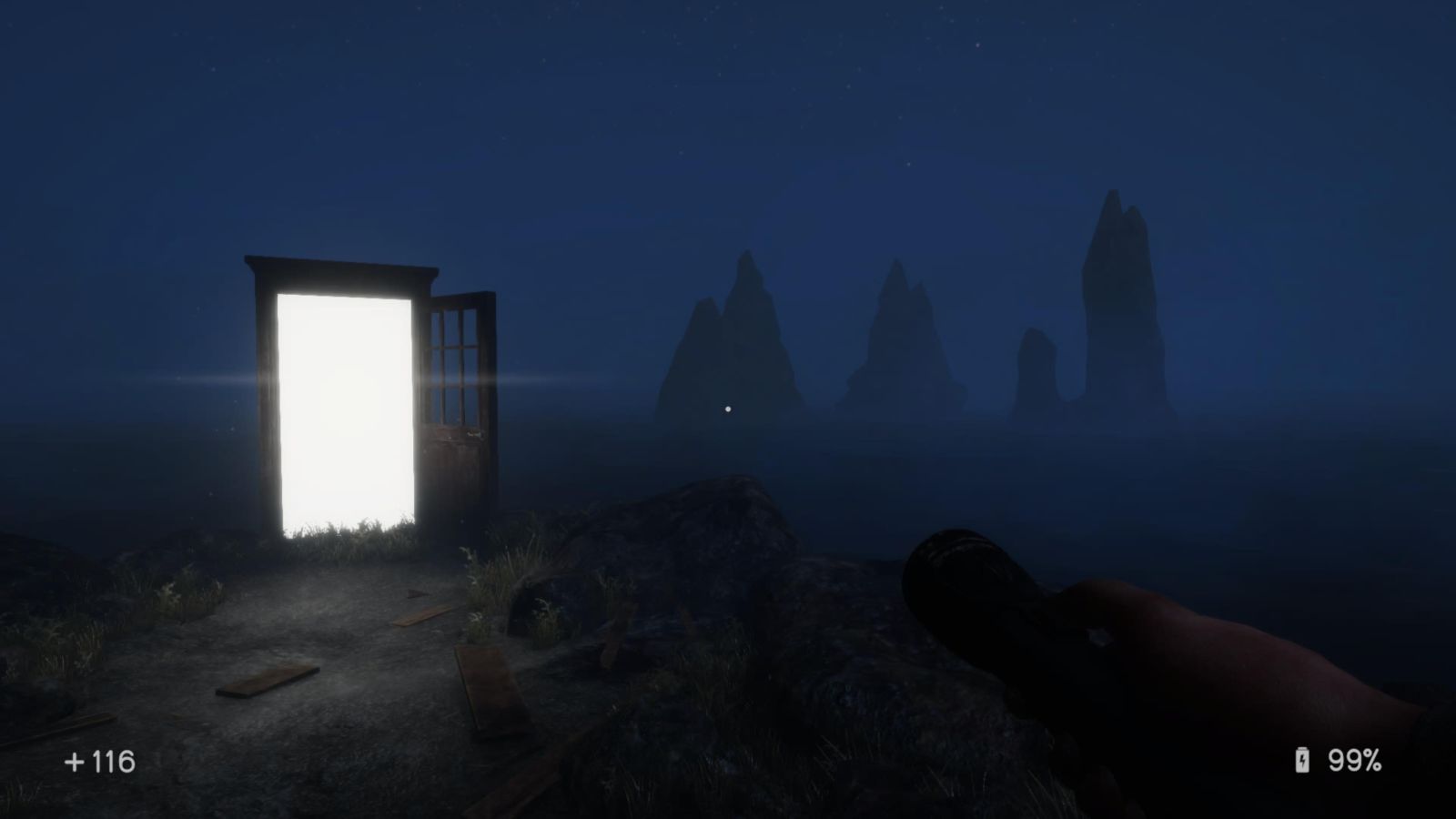 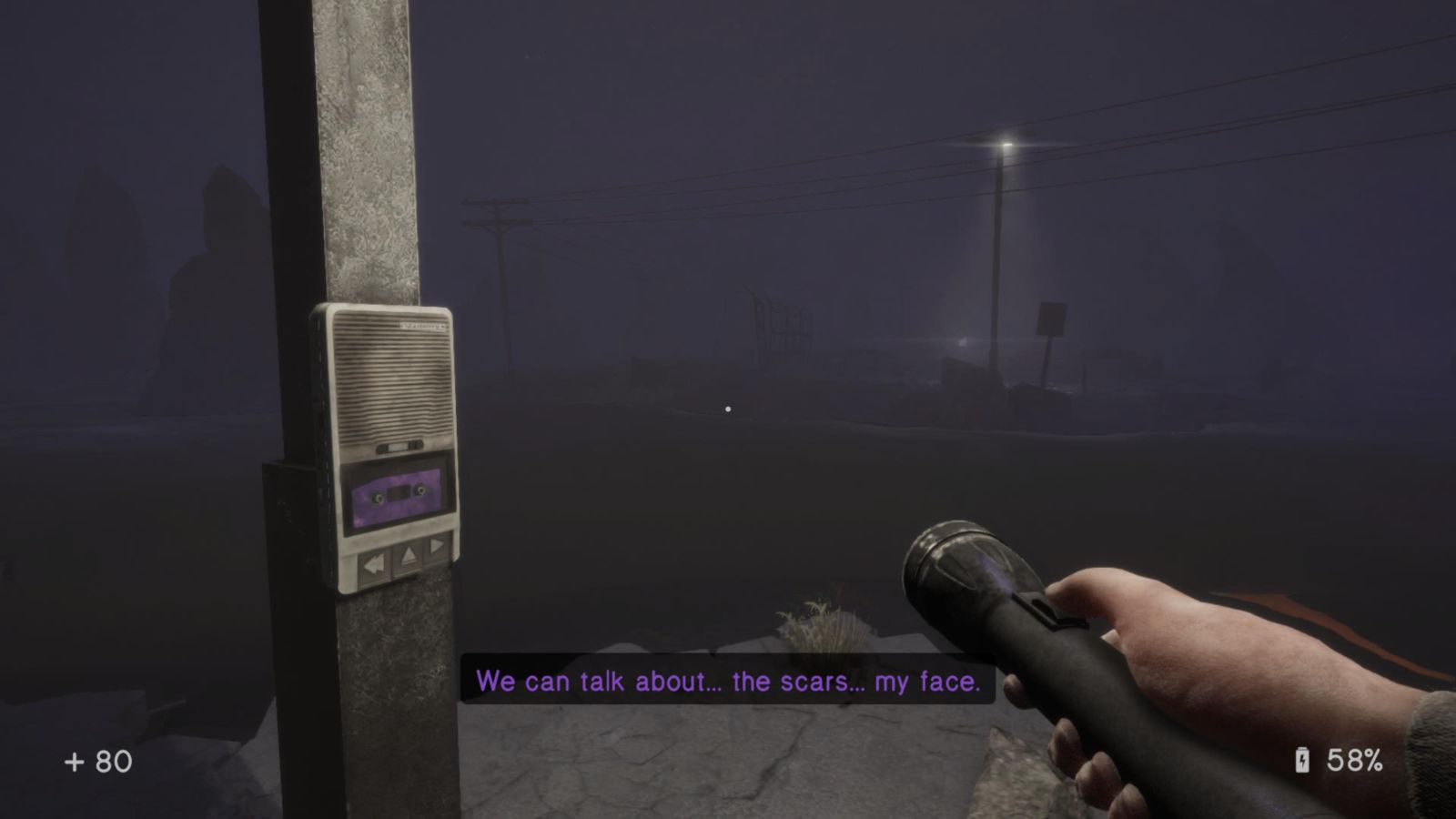 Desmond begins with little more than a flashlight, which is a battery hog and must be used sparingly. No worries though, as scattered throughout the rundown building and levels are tons of batteries, ensuring that you are almost never engulfed in total darkness. That said, the game is dark, and purposefully so, forcing you to use the flashlight more than you’d like unless you turn up the game’s brightness to compensate. Thankfully, I was only honestly worried about running out of battery in one level, as I constantly had to use my flashlight to keep a monster at bay as I explored.

As you explore you’ll find a gun; followed by a shard of glass which can be used as a makeshift knife to attack enemies, unveil secrets, and to cut your way through obstacles; a gas mask to help you survive contaminated rooms; a flare gun to clear away particularly strong areas of darkness; a shotgun to keep packs of enemies at bay; pills which can grant health, lure enemies away, and dispose of chemical spills; and a radio which can be used to hack control panels and as a weapon when low on ammo. Each item is absolutely essential to progression, with the first item – the gun – being hidden in the building itself, with everything else being found within a tape. New doors leading to patient’s homes are hidden throughout the starting building and accessing them will require clever use of your items. Inside each home will be your next tape which must then be taken back to your office to listen to and complete.

Desmond can upgrade his stats to an extent. His Health, Stamina, Speed, and Stealth can be increased by finding pills, with every three of a particular pill found leading to a small increase for that corresponding stat. There are pills hidden absolutely everywhere throughout In Sound Mind, and while they are not necessary for progression, they do help Desmond survive harder sections and give players a reason to fully explore each area. 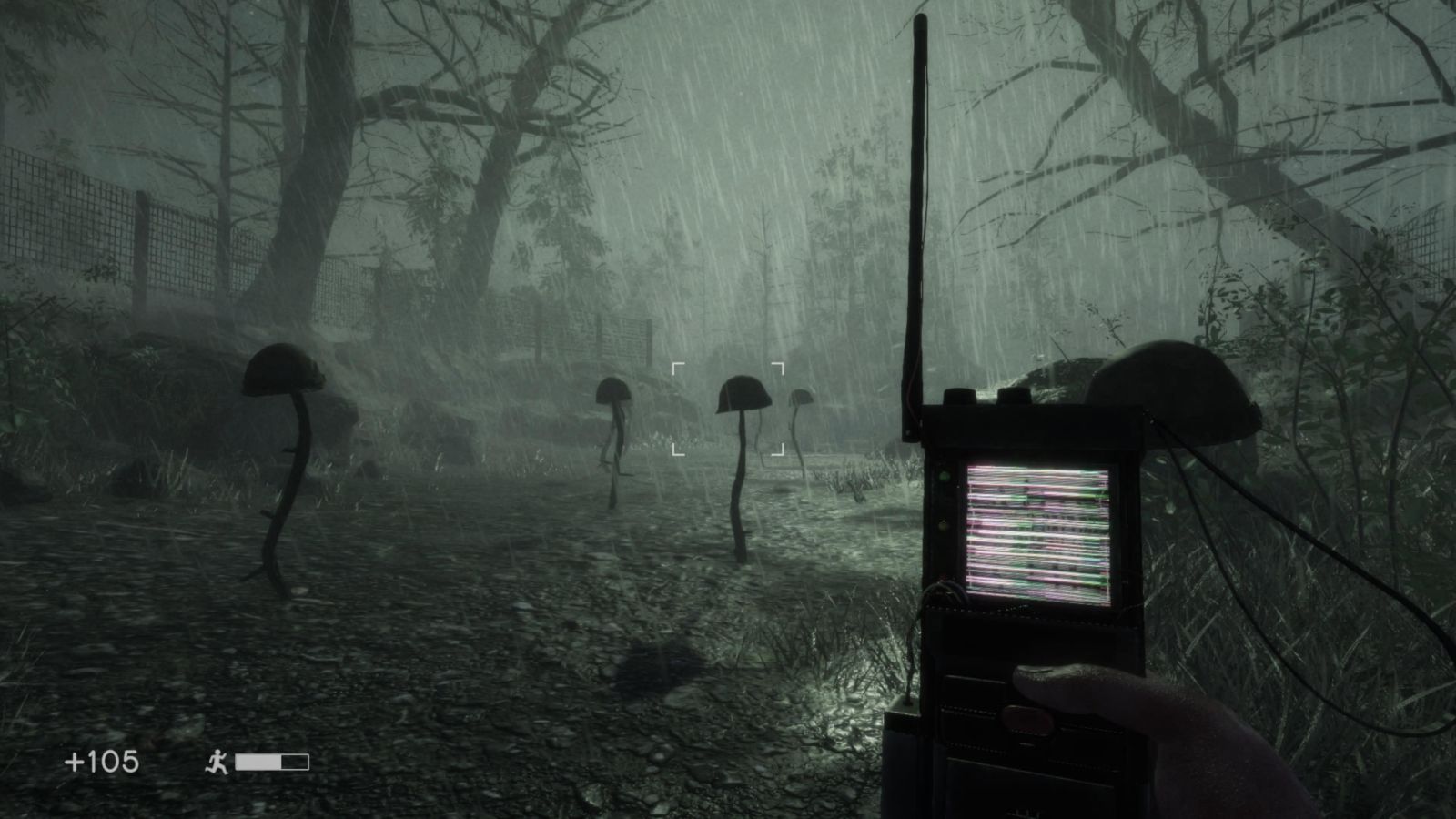 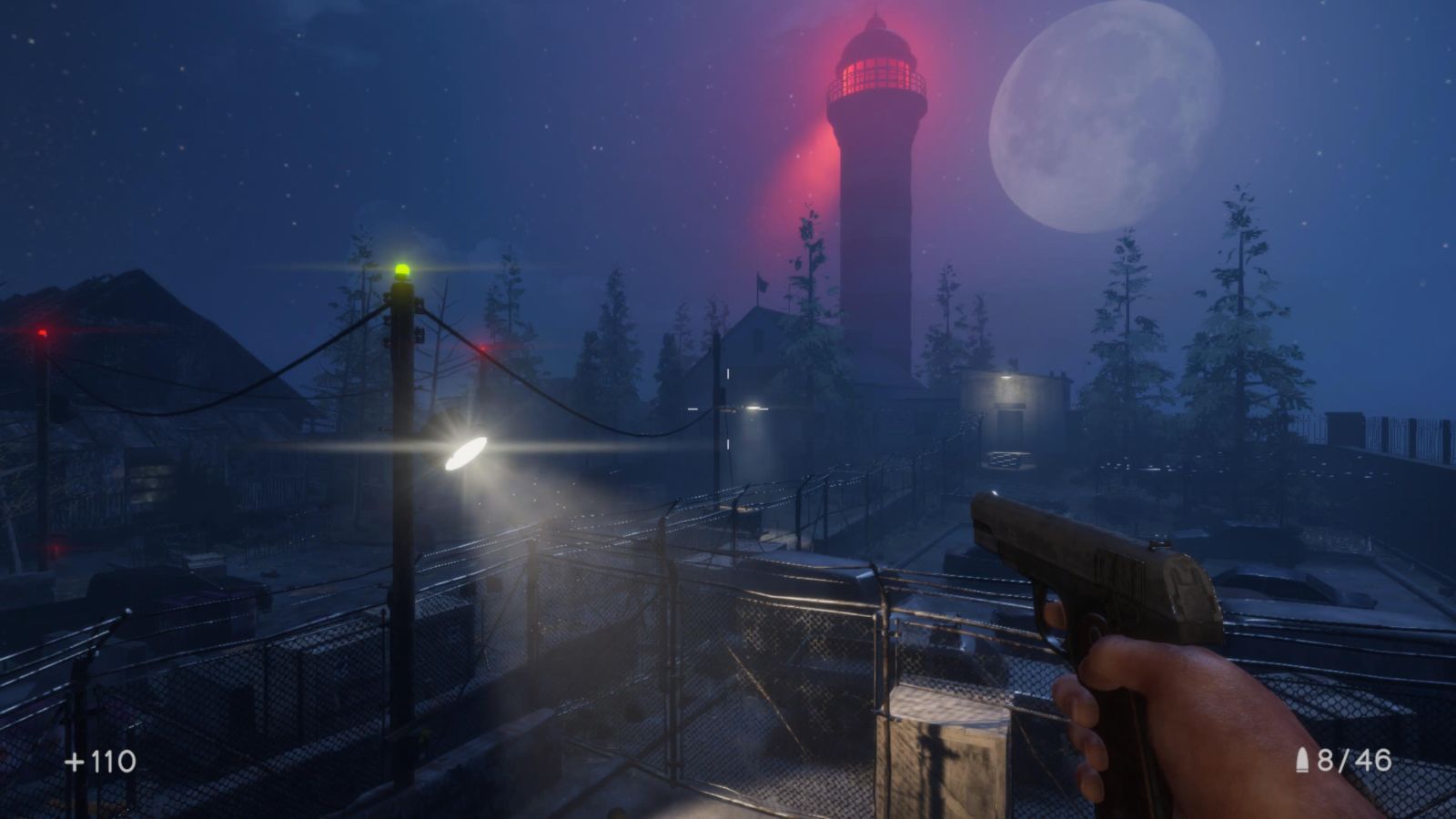 Unfortunately, exploration is In Sound Mind’s weakest point. While the levels are sprawling landscapes littered with buildings, secret areas, underground layers, water towers, lighthouses, and more – it is under-served by the lack of an accessible map. You can find various sign posts or posters in areas with a map, but a game like this really needs a readily accessible map to help with exploration. The game rarely tells you where to go, and you are often being pursued by enemies or the boss of the level, making exploration a hassle as you are constantly forced to race through the darkness, with little to no idea where to go next, all while trying to stay alive. The addition of a map would have made this less troublesome, as then you would at least know if you were heading toward one of your multiple targets, but without it and in the dark – you’ll often find yourself backtracking in hopes of figuring out some nook or door or item you may have missed all while trying to construct a mental map. It was meant to create tension, but instead grinds the game to halt. At its worst, these moments truly hurt what is otherwise a memorable experience.

Gripes about lack of a map aside, In Sound Mind is a great psychological horror game, rarely relying on cheap scares, but rather keeping you constantly tense that something may happen at any moment. There are also a few sections of generally funny jump scares where an unnamed entity likes to show up behind you, normally just watching you or mocking you, and often making your predicament worse by closing a gate or setting enemies after you.

An example of one of my favorite parts which showcased the game’s sense of humor, while involving both a jump scare and then a genuine laugh. I was exploring a locker room and stumbled upon a locked door, Desmond grumbled about needing a key and I turned away, only to be scared by a mannequin standing directly behind me, arm stretched out, holding a key. I took it and stared at him a while, wondering what he may do, before finally turning and opening the locker. When I turned back, the mannequin was now sitting on a bench giving me a thumbs up. He wore a name-tag that said Dave, and he continued to turn up in multiple sections to help guide me. I loved this, as it went against the trope of using moving mannequins as a scary prop, and instead made him someone I was glad to see. 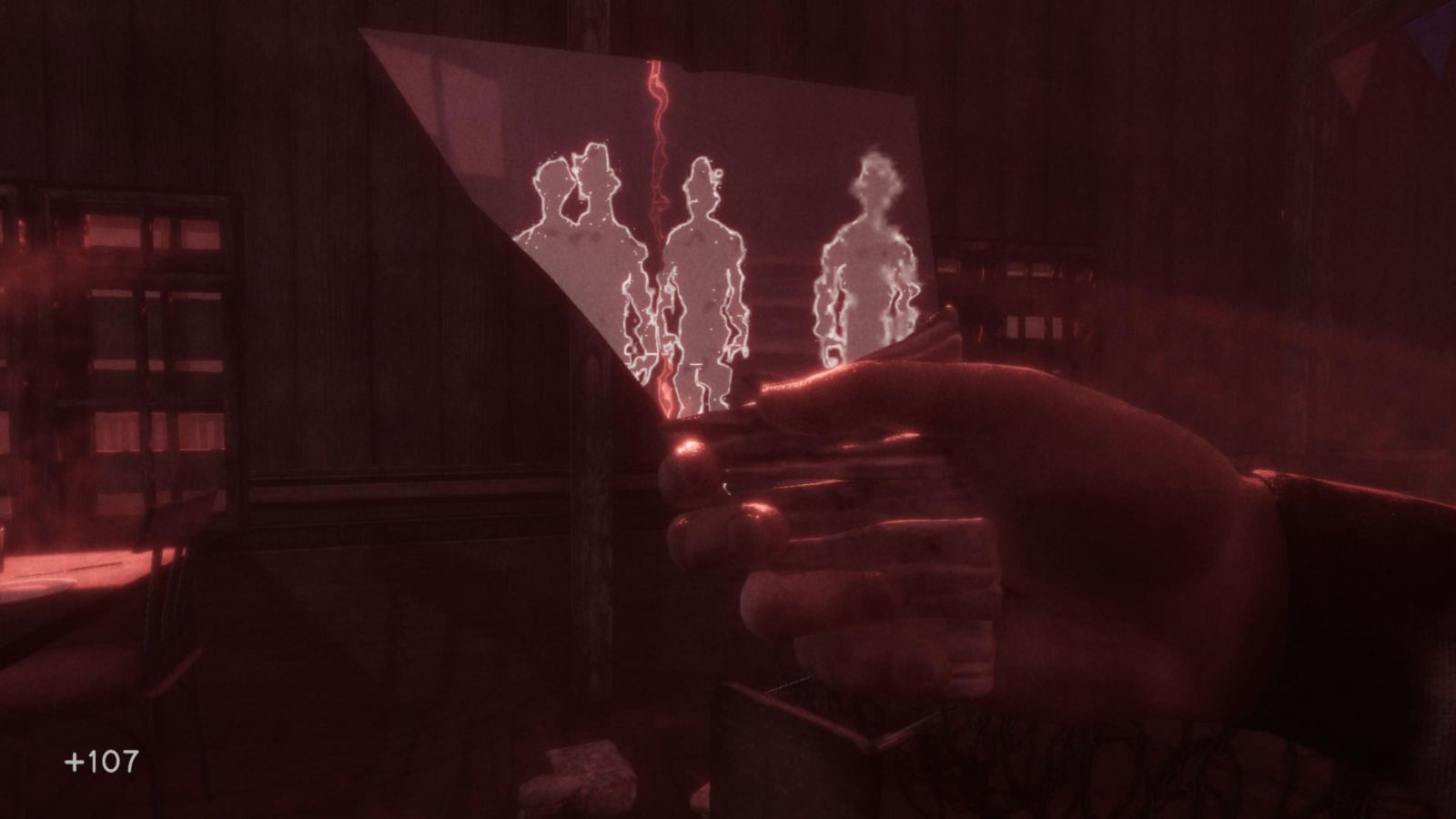 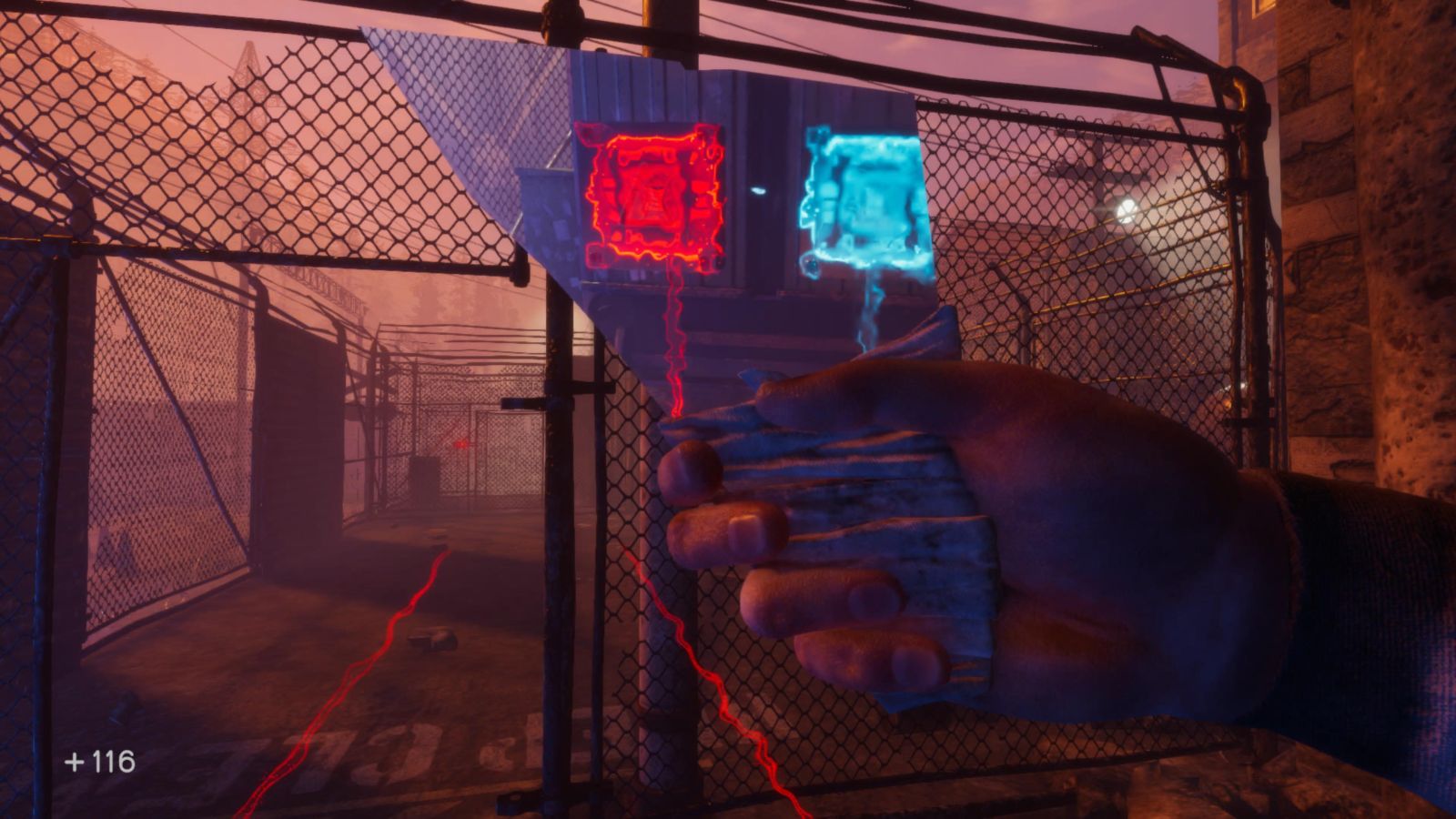 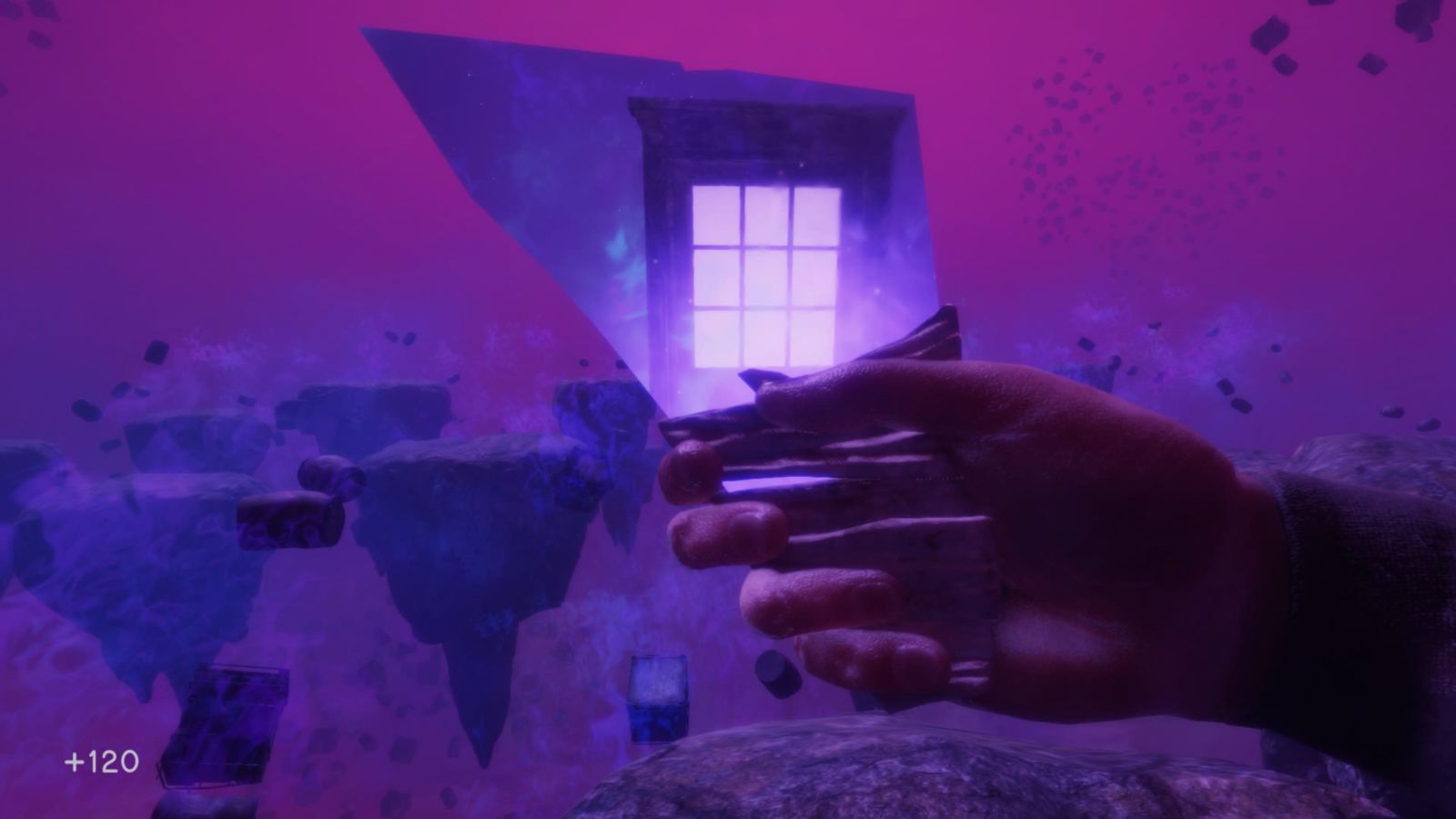 In Sound Mind also finds creative uses for the items Desmond has, with the shard of glass being perhaps the most useful. While it can be used to attack and to break items, it can also be used to see a reflection of what is behind you – uncovering hidden messages, objectives, hidden enemies, and more. Anything you see in the mirror will become highlighted and stay lit up for a moment so you can investigate without the mirror in hand. At times, you will find items in the mirror that you cannot see in reality, but once the mirror shows them then they will physically appear in your world. It’s rare that I find a completely unique gameplay mechanic in a game, especially one so well done. Many areas in the game have hidden messages which do nothing to progress the story, but serves to give curious players an insight into the world and Desmond’s patients. Be sure to use it often, especially anytime you feel lost or unsure of your objective.

Aside from the mirror mechanic, In Sound Mind is essentially your typical first person horror game. You must explore the world, solving various puzzles and completing tasks, fighting off enemies – although they only appear sparingly – and then tackling the main boss. While the boss will chase you from nearly the beginning of the level, it isn’t until the end that you can actually defeat them. This makes the boss a constant threat throughout, normally appearing at the most inopportune times to prevent you from progressing without a fight. Thankfully bosses can be stunned, giving Desmond seconds to flee to safety.

I don’t want to spoil the story by speaking about it, but I do want to explain that each patient’s tape is unique. One patient was a former child beauty pageant contestant, before she got hurt in an accident, while another was a veteran, etc. Their stories are told via the world, documents found, and the boss which serves as a manifestation of their inner demons. This is a unique concept that helps In Sound Mind stand out from the packed horror genre. By focusing on patients and their fears, it gives us both a look into their world and Desmond’s, as he is both trying to survive and help his patient. 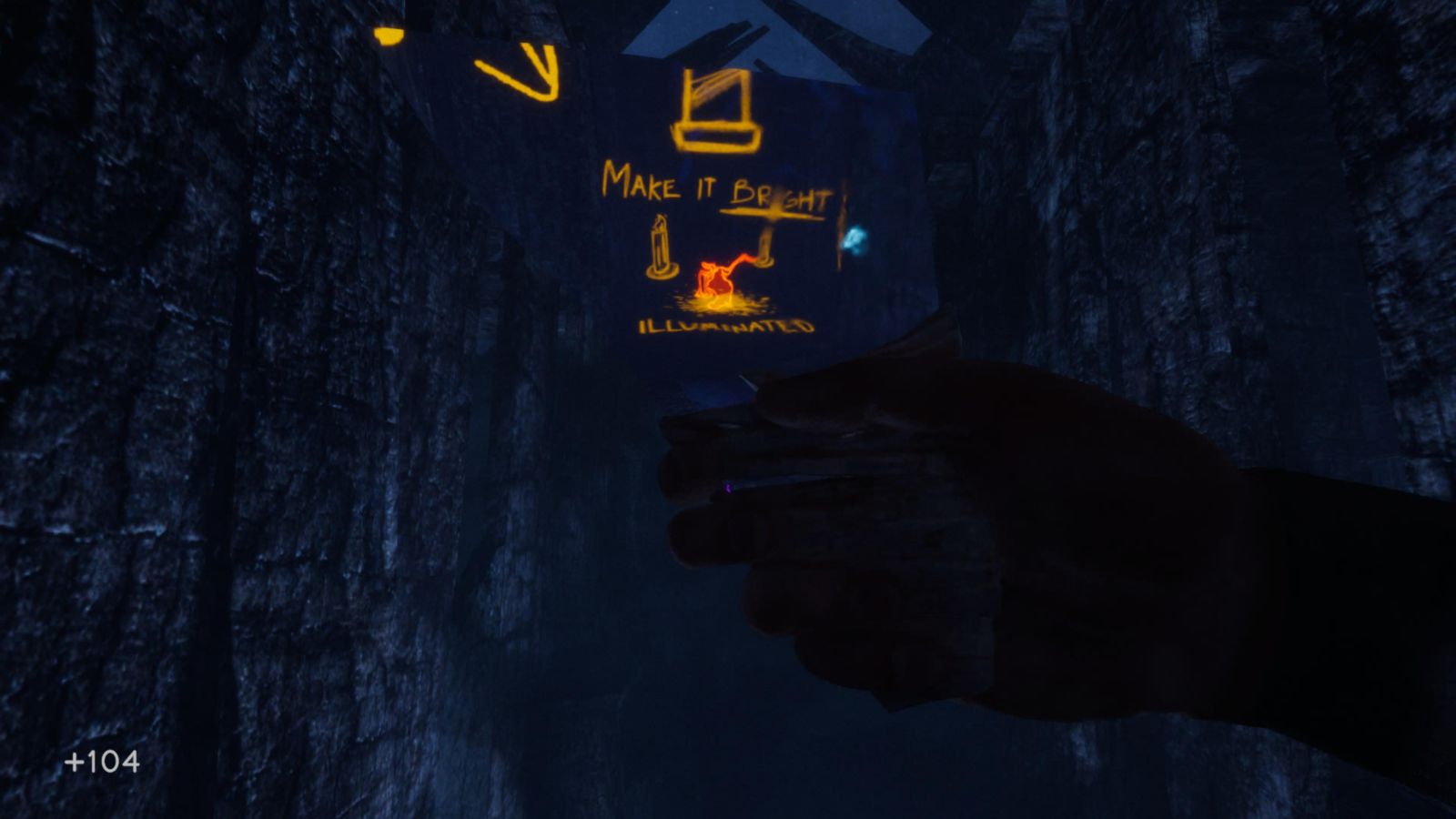 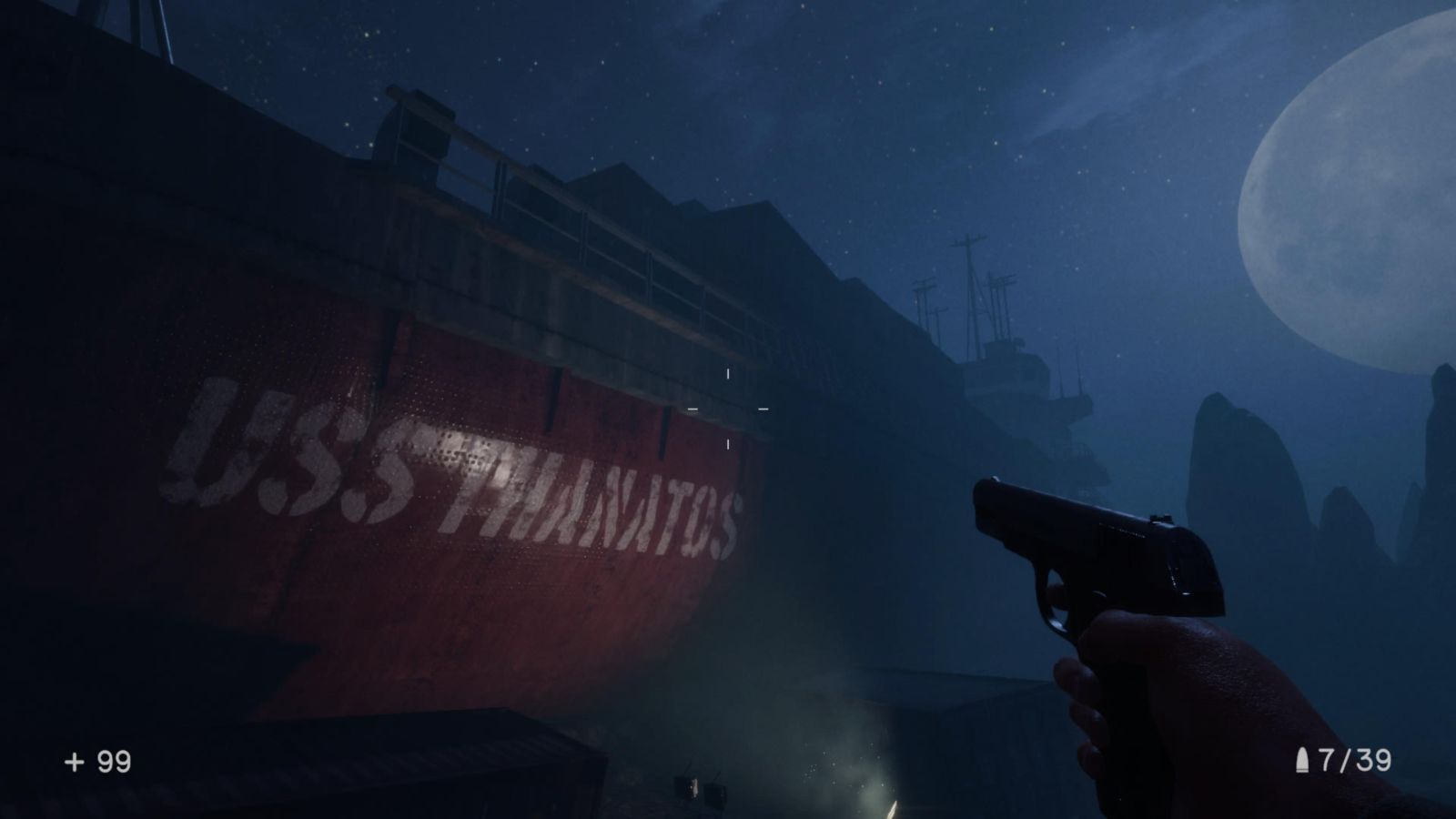 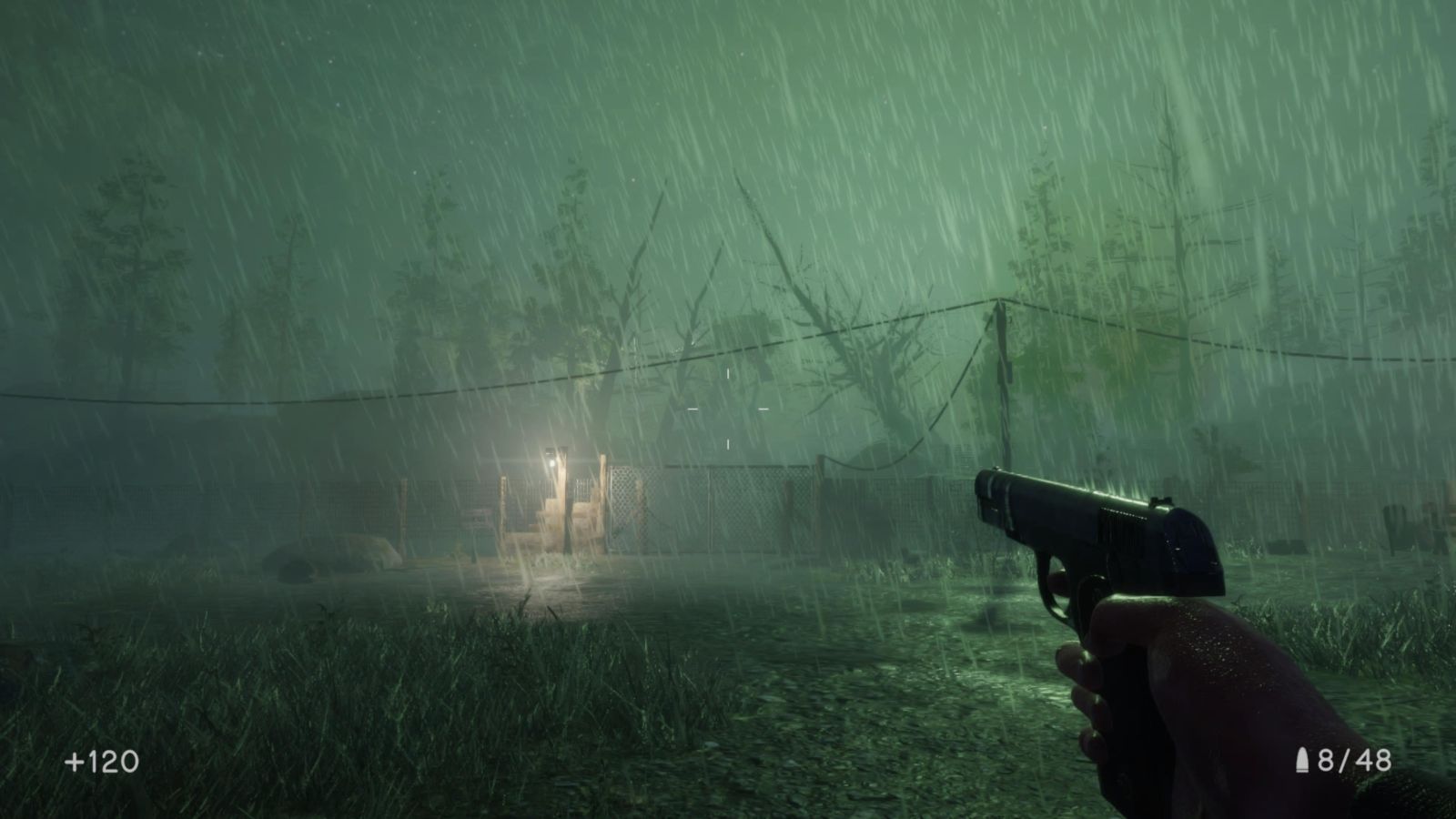 While not a particularly long game, In Sound Mind will take most players around 8 to 10 hours to complete on a first playthrough, depending on how often they get lost. Subsequent playthroughs, even on higher difficulty levels, would most likely be much quicker as a bulk of your first playthrough is spent exploring and learning what the game wants you to do. For completionists, there are tons of documents to find, and five hidden vinyl records, but there is no ledger to keep track of how many documents you’ve found and how many exist, so there’s no way to tell if you’ve read everything. Each tape and the main building itself has a variety of pills hidden and these are tracked, so you’ll always know how many are left to find.

There’s a big focus in the game’s advertisement on the soundtrack being crafted by The Living Tombstone, and overall, the music is great – haunting, while not being overwhelming. The hidden vinyl records you can collect offer an especially eclectic mix of genres to listen to at your own pleasure. My only gripe would be the enemy attack music, which would be fine in a more action-based game but sounds out of place in In Sound Mind as it is almost too upbeat. The quick swap from calm and melancholy to the enemy music is jarring, despite how many times it happens. Still, I appreciate the work done by The Living Tombstone and felt that enemy music aside, the game greatly benefited from having a singular musical vision.

In Sound Mind is a psychological horror game which borders more on tense than scary, and proves to be a unique look into the minds of struggling individuals. Having each tape/patient provide a different world, with the patient’s inner torment essentially lashing out as the level’s boss, is a unique twist on the genre. The juxtaposition between the monster trying to hurt you, but also expressing its doubt and fears, all while Desmond attempts to calm it and show that he wants to help, felt surprisingly fresh – and gave me much more reason to continue than a simple good versus evil fight would have. A sense of humor, large levels, and a variety of puzzles make In Sound Mind a game worth picking up for those looking for a new twist in an overdone genre.

Richard Allen is a freelance writer and contributing editor for various publications. When not writing for Gaming Trend you can find him covering theatre for Broadway World, movies and TV for Fandomize, or working on original stories. An avid retro gamer, he is overly obsessed with Dragon's Lair. Chat with him via @thricetheartist on Twitter and @richardallenwrites on Facebook and Instagram.
Related Articles: In Sound Mind
Share
Tweet
Share
Submit