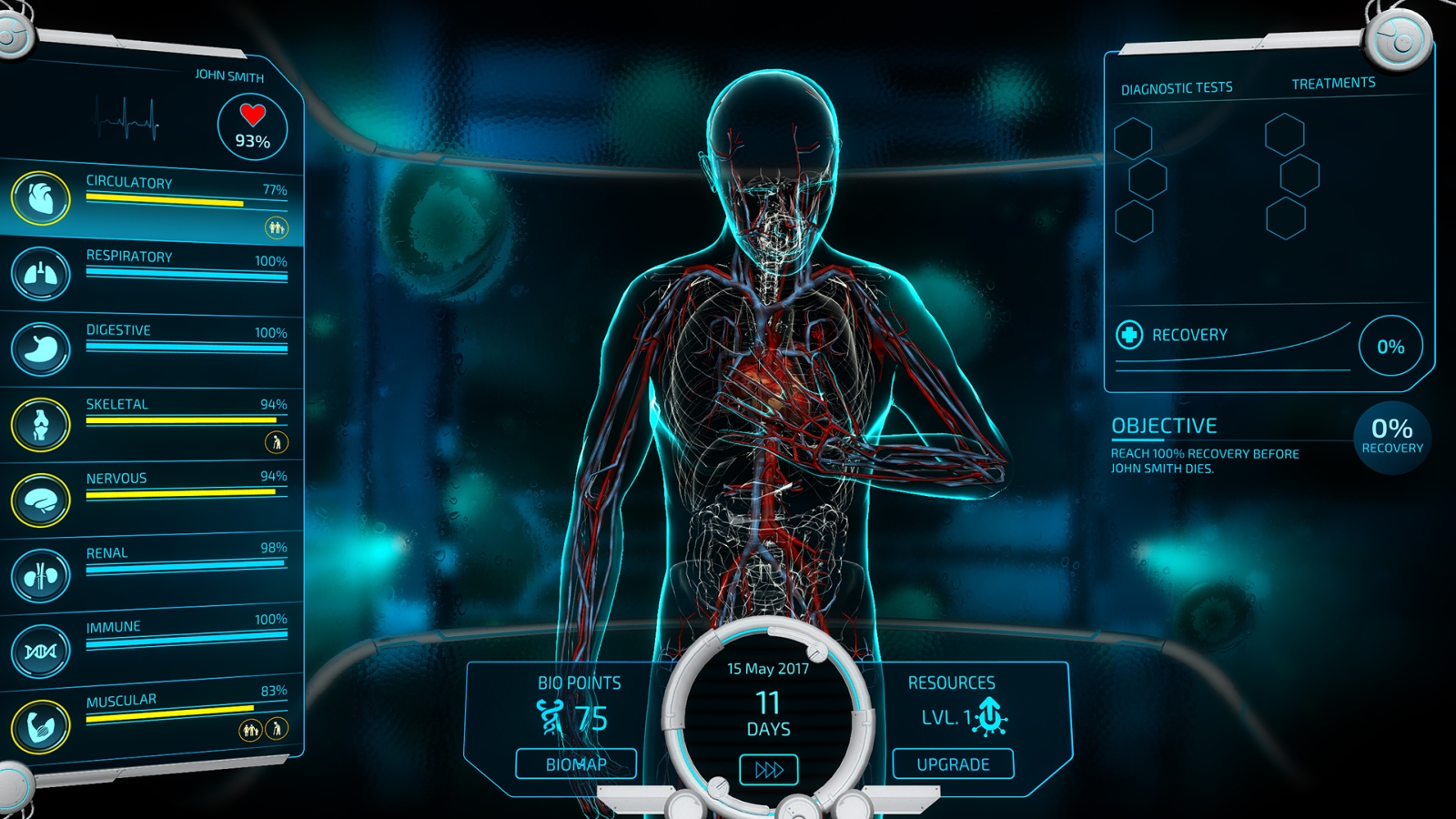 I’m not a doctor. I don’t even play one on TV. I don’t know why they’ve handed me a scalpel, but hey…I’m wearing this white jacket, and this stethoscope I found on the sidewalk seems to fit, so let’s use the rib spreader, crack open Bio Inc: Redemption, and see what makes it tick.

Bio Inc: Redemption puts you in the scrubs of a doctor with the sacred charge to save the life of some very, very sick patients. They’ll come in and present somewhere between four and a dozen symptoms including coughing, fever, leg pain, and more. Your job is to figure out where all of these disparate symptoms overlap, apply the appropriate tests, and then treat them before the patient expires. Unless you like killing people…Bio Inc: Redemption has a mode for that too, but we’ll get back to that in a moment — let’s figure out how to save lives before we go about snuffing them out.

Selecting your patient from a dropdown list, you’ll get to pick from generic male and females, as well as a few notable names like Adolf Hitler, Hillary Clinton, Kim Jong-Un, and Donald Trump. Whatever your political bend, there’s somebody here to save or let shuffle loose of their mortal coil.

As your patient presents their illnesses, you’ll click on each of them to highlight what diseases carry those symptoms. Once you think you’ve identified what could be affecting your patient and click on it, you’ll be presented with diagnostic test options, costing you some of the Bio points you’ll need to earn. Back to the patient paperdoll, you’ll harvest blood cells and proteins by clicking on them before they disappear. Spending those points to kick off a test, you’ll wait for the results and, if positive, being presented with options around treatment, which also cost Bio points.

Collecting blood cells and proteins is a race as they pop up and disappear across the various body systems (e.g. circulatory, respiratory, skeletal, etc. — eight in all). Hitting specific milestones will let you upgrade your ability to harvest them faster, or granting additional points for each one. It’s very reminiscent of games like Plague Inc, and this won’t be the last time you hear that comparison.

As a doctor, you can make recommendations to your patient to upgrade their lifestyle and environment. For instance, you can spend Bio points to get them to spend more time doing aerobic exercise, switching their diet, or encouraging them to have a glass of wine a day. If things go particularly sideways, your patient may end up in the ICU. To help them get the best care possible, you can spend Bio points to upgrade facilities to perform surgeries, improve diagnostics, and more. On the death side, you can push your patient towards obesity, smoking, and other life-shortening activities in a similar fashion to push failures of systems. As an example, if you already have hypertension and cholesterol problems, being morbidly obese and having genetic disposition issues will only crash your cardiovascular system even faster.

Completing levels earns you experience points. At level 2, you can begin to pick boosters to augment gameplay. These boosters fall into five categories from Economic, Diseases, Lifestyle, Intensive Care, and Environmental improvements and grant boosts like faster research speed, a headstart on Bio points, or even a boost that makes fewer diseases appear when you run diagnostics to help narrow your prescriptive care. You can select up to five of these as you go up in level, making the game a little easier on higher difficulty levels. On the death side (your XP and levels are shared across both campaigns), these are often flipped, making diseases more potent, as an example.

The way the different sections of the campaign are gated are by completing the three progressive gameplay modes in each area, with a certain number of “stars” (they mean hearts) or skulls needed to unlock the next area. Even if you complete all of them on normal, it’s insufficient to even unlock the first stage past med school — you’ll need to pop up to “Severe” difficulty and beat it at least once to move forward. This is no different on the “death” side, where “skulls” gateway anything past the “morgue” levels. In an industry where often less than half of the audience complete a game, this seems like an arbitrary and unnecessarily punishing mechanism which will limit the amount of fun people will have for no other reason but to tick a “compared to Dark Souls” comparison box. It forces players to fail repeatedly until they grind out a lucky victory or get the right boosts to get it across the finish line.

I’m sure doctors would love checking a box to improve the lives of their patients.

If the campaign left you cold (and possibly dead?), then you’ll be happy to see the included Sandbox mode. In this section of the game, you can specify and tweak any win condition you might want to mix up, creating a custom game of your own design. If you’d like to remove a particular system or disease from the game, you can simply toggle it. Similarly, you can set victory conditions to challenge yourself in new and interesting ways, extending the game further than the repetition of the campaign mode.

Unfortunately, I can’t give the game a clean bill of health. This patient does have a few cancers (read: bugs) left to treat. I ran into quite a few crashes to desktop, taking hundreds of days of progress with it. There are no mid-mission saves, which can be incredibly frustrating, especially with the aforementioned stability problems. The team just patched the game to fix a problematic crash, but it seems there’s more diagnostic work to do as the game simply is not stable.

Bio Inc.: Redemption follows a lot of the same gameplay loops as games like Plague Inc. for its campaign, but multiplayer is where things get shaken up a bit. Playing against a friend, one person will be trying to save the patient, while the other actively works to kill them. Instead of using an asymmetric mode, both players actively killing/saving the patient in real time. It’s a good cat and mouse mechanic, and a definite bright spot for the game. Unfortunately, that fun was ruined literally every time I’ve tried to play with a crash to desktop at some point mid-game. The team has to fix the stability of this game, because there’s a lot of fun under the surface of this mode.

Bio Inc: Redemption fits in a strange place. It feels like it’d be as welcome on a cell phone as it is on PC, and as a result, it often feels like it doesn’t take advantage of either’s strengths. The campaign’s restrictions create a barrier for casual players, but the sandbox is freeing. Multiplayer is a real highlight, as long as it stays stable. When the crash bugs are ironed out, there’s a lot of fun to be had here, I just wish the difficulty was less of a cliff and more of a curve.

Ron Burke is the Editor in Chief for Gaming Trend. Currently living in Fort Worth, Texas, Ron is an old-school gamer who enjoys CRPGs, action/adventure, platformers, music games, and has recently gotten into tabletop gaming. Ron is also a fourth degree black belt, with a Master's rank in Matsumura Seito Shōrin-ryū, Moo Duk Kwan Tang Soo Do, Universal Tang Soo Do Alliance, and International Tang Soo Do Federation. He also holds ranks in several other styles in his search to be a well-rounded fighter. Ron has been married to Gaming Trend Editor, Laura Burke, for 21 years. They have three dogs - Pazuzu (Irish Terrier), Atë, and Calliope (both Australian Kelpie/Pit Bull mixes).
Related Articles: Bio Inc.: Redemption
Share
Tweet
Share
Submit