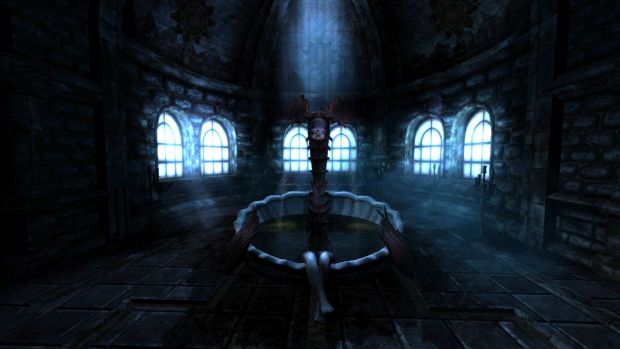 It’s probably safe to call Amnesia: The Dark Descent one of the most influential horror games in recent memory, with games like Outlast, Daylight, and even the upcoming Resident Evil VII taking a lot of inspiration from its design.  Not only that, but its popularity with Let’s Players like Pewdiepie and Tobuscus helped shape the popularity of Youtube gaming, for better or for worse.  So considering it’s legacy, it’s a surprise that the franchise has just now made its way to consoles.  While a little rough around the edges and lacking any new content for longtime fans of the series, the Amnesia Collection has plenty of scares for a new console generation of players.

One thing that has to be considered is that the Amnesia Collection is not an HD remastering, but rather a straight port of the game, which may be disappointing to some fans of the series.  While the first game is only a little over six years old, it was fairly low budget at the time and it definitely shows, especially when compared to the improved visuals and more varied environments of A Machine for Pigs.  It would have been nice to have some improved textures or more detailed scenery in this re-release, but it’s not a deal breaker.

While by no means ugly, The Dark Descent is six years old and showing it’s age.

The game controls quite naturally, and some areas actually seem to work better with the PS4 controller than the mouse.  For example, spinning one of the analog sticks to turn a wheel is much more natural than moving the mouse in a circle.  Also, every time you turn on your trusty lantern, the light on the back of the PS4 controller glows enough to light the entire room, which is a neat, immersive touch.  However, all three games suffer a bit from issues with the hitboxes on small objects, which require a surprising amount of precision to pick up or manipulate.  This leads to much frustration in Dark Descent when picking up tinderboxes, as well as a quick “move an object to the next room” puzzle in Machine for Pigs quickly turning into a longer “get the object unstuck from the space between the stairs” puzzle when I accidentally dropped the object in question.  All three games suffer from a few physics quirks and visual glitches as well, though none will risk breaking your game.

Of the three games on display, The Dark Descent is still the strongest entry in the series.  You play as Daniel, a man haunted by a strange shadow, who has woken up with no memory and a note telling him to descend to the basement of the old castle he’s found himself trapped in and kill the Baron Alexander hiding there.  What follows is a descent into Daniel’s and Alexander’s dark shared past, which is rife with Lovecraftian horrors and human atrocities alike.  Gameplay mostly consists of adventure game inventory puzzles and tense cat-and-mouse games with the castle’s monstrous denizens, creatures so horrible that you’ll literally start to go insane by looking at them.  Sanity is important in the Dark Descent, as your vision will start to cloud if you spend too much time in the dark or around monsters.  Not only that, there’s no way to defend yourself from the creatures, so get ready to spend plenty of time hiding or running away.  There’s also a lot of resource management, as you’ll need to gather tinderboxes to light candles and oil to keep your lantern burning.

While lacking some of the polish or fancy scenery of its sequel, Machine for Pigs, the gameplay is varied, with fun adventure game puzzles and an emphasis on exploration, as there’s plenty of hidden text to find in the form of Daniel’s journal entries, as well as other witness accounts.  The halls of Brennenberg Castle are dark and foreboding, and the monsters have unique, terrifying designs.  One particular level, a chase through a flooded tunnel with an invisible monstrosity, is still one of the most memorable and terrifying moments of any game I’ve ever played.  The Dark Descent is also the real meat of the collection, as it’s almost twice as long as the other two games put together.

Also included in the collection is Justine, a free bit of DLC for the first game released as part of a Valve ARG.  As a reference to its creation, Justine plays like a cross between Portal and Saw, where you play as a seemingly mute woman forced to play a sadistic game in order to escape.  The setting and story are interesting enough and there are plenty of great scares, mostly due to an interesting new cast of monsters chasing after you.  However, Justine suffers due to the fact that it’s needlessly difficult.  There’s no way to save your game, and dying sends you back to the beginning.  Considering that a full playthrough can take anywhere from a half hour to forty five minutes, that’s a lot of wasted time on each death, especially since the last enemy encounter is the most difficult one in the entire franchise.  Overall, while Justine’s a neat little addition to the package and I’m glad it was included, it’s little more than a bonus feature compared to the other two games.

A Machine for Pigs might be a huge improvement visually, but it loses a lot of what made the first game special.

Lastly, there’s A Machine for Pigs, the somewhat controversial sequel.  Frictional, the developers of the previous two games, left development to the creators of Dear Esther on this game, and it definitely shows.  The resource gathering, inventory system, and sanity meter have been cut, as well as most of the exploration.  There are also nowhere near as many enemies to be found, and the few encounters you do have are made almost trivial by the inclusion of regenerating health.  As a result, it’s also nowhere near as scary as the previous two games.

While the gameplay feels much simpler as a result of these changes, it also allows for much tighter pacing.  A Machine for Pigs has the best story of the collection hands down, ditching most of the Lovecraftian aspects of its predecessor in favor of a more personal story about a man and what he’ll do to protect his sons from a world going mad.  It also helps that the cast doing the voice acting is amazing, even if the villain is a bit hammy at times, pun intended.  Machine for Pigs has a great visual style and level design, guiding you down through the titular mechanized slaughterhouse at a breakneck pace.  There’s a good chance the game might lose you a bit towards the end, when the subtle world building is pushed aside in an attempt to raise the stakes so sudden it starts to feel silly, but the last moments definitely save the story, ending the series on an appropriately bittersweet note.

Amnesia: The Collection proves why it’s one of the most imitated horror games of all time: it’s also one of the best.  While there’s not a lot of new content for any returning players, if you haven’t played Amnesia, now’s the perfect time to change that.